Once again Butlins delivered yet another excellent winter music festival weekend at their Minehead Resort. FFA simply can’t get enough of these things. 30+ acts over three nights, with accommodation to boot, at a bargain price – what’s not to like? Butlins these days are thoroughly modern holiday destinations and are tailor made to host winter festival breaks like The Great British Alternative Music Festival. They offer accommodation and dining packages to satisfy most budgets, the facilities are top notch, and the lovely town of Minehead is a short stroll along the Prom. Whilst Butlins offer themed weekends to suit all tastes, their winter music festivals are a different beast. Events like the GBAMF are proper festivals, with a festival feel and atmosphere, only in winter, without the hassle. Our FFA Reviewers love ‘em. Take a read of the FFA Great British Alternative Music Festival Minehead 2019 Review to read why we keep returning. 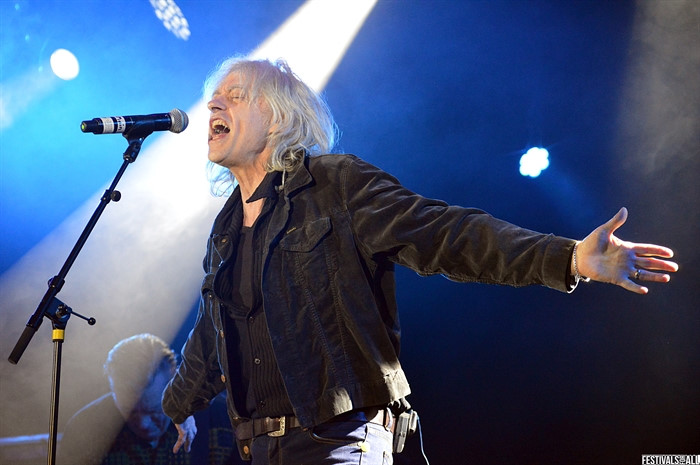 Like any event, GBAMF is only as good as its audience – and they are a smashing crowd. It attracts all sorts with its blend of punk, mod, rock, and alternative bands. But remember that most Butlins bills include a diverse range of other genres, so there is usually something for everyone, no matter what your musical tastes. And so it proved.

GBAMF has its own atmosphere; it’s the gathering of the clans, with some of the originals of the punk movement, to celebrate not just the music, but an entire culture. There is a strong bond between the people here, and no wonder. Survivors from the 70’s witnessed the entire punk ethos, be it the tunes, the fashions, the attitudes, the politics, the anarchic world view, attacked and vilified by the established order. The whole anti-punk polemic based on a hatred of a genuinely working-class movement of expression and creativity. Many of those in attendance at Minehead remain true to the cause. They have lived through this and survived to tell the tale. That is why the sense of shared experience, of community and bonding, is so strong at GBAMF. Sedition lives on here!

It was an excellent weekend, and Butlins aggressive pricing resulted in some cracking value. You can’t fault the place, the atmosphere, the crowd or the bands on offer. We had a ball! 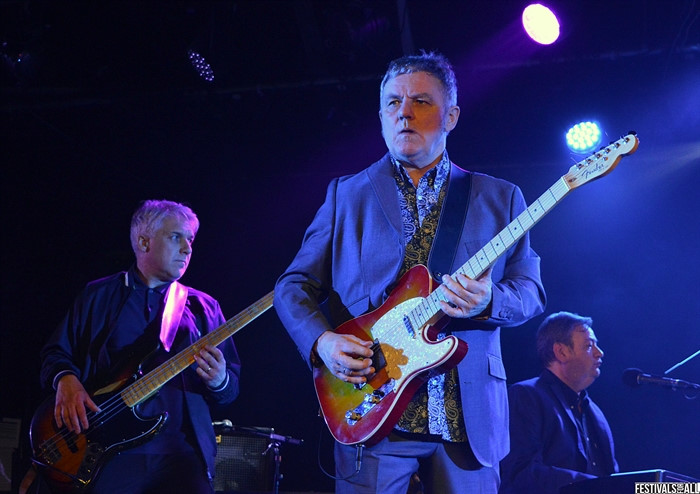 FFA witnessed some terrific performances across the stages, and the quality of artists, particularly when factoring the great Butlins value, was excellent. Your intrepid Reviewers watched loads of bands, and missed a few too… but that’s festivals, and drink, for you. Here’s just a snapshot of our highlights; it doesn’t purport to be a full inventory – because that’s well, just a list! If you were lucky enough to be there and we’ve missed your favourites and highlights then sorry … life is all opinion and choices (and lack of copy space) after all. If this review simply gets you thinking and talking about our choices and omissions, and reminiscing on your own favourites, then it’s served its purpose!

Goldblade! What an absolutely blistering start to any event. Robb and his merry men epitomise the very essence of punk, they capture its soul and condense it into three-minute punk rock nuggets. The bands searing passion for the genre is plain for all to see and Robb, so often the go-to commentator on the whole punk ethos, recognises that punk is music of the street, music of the Common Man. The crowd are his people, and he is one of their own. He’s soon amongst the bouncing crowd and the rapport, the bonding, the collective camaraderie becomes a tangible thing. Artist and audience as one. We ALL believe, John. One of the sets of the festival. 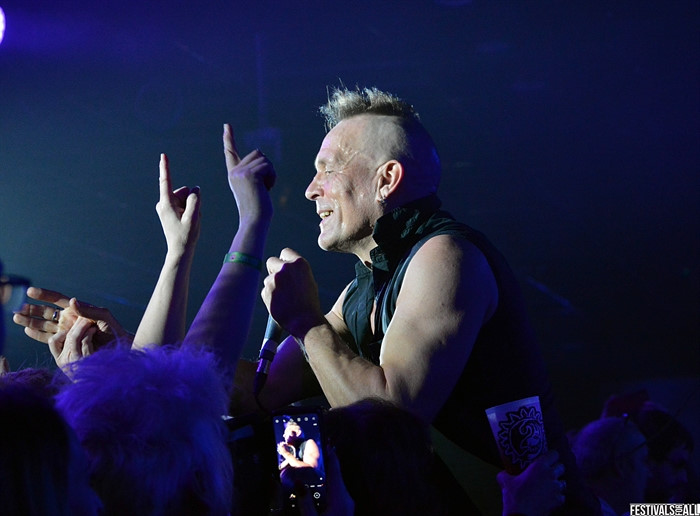 The Wildhearts rocked up a right ol’ storm. Always difficult to categorise, which is often a very good thing, the band’s soundscapes encompassed everything from driving hard rock to almost Oi! proportions. The guitar heroics between Ginger and CJ were a thing of beauty with ‘Vanilla Radio’ arguably the best of an excellent bunch. This was high-energy merriment and a great set from the band. FFA were off to a flying start. Angelic Upstarts appeared to be having a bad day at the office and looked and sounded under-rehearsed to these old ears. Shame. 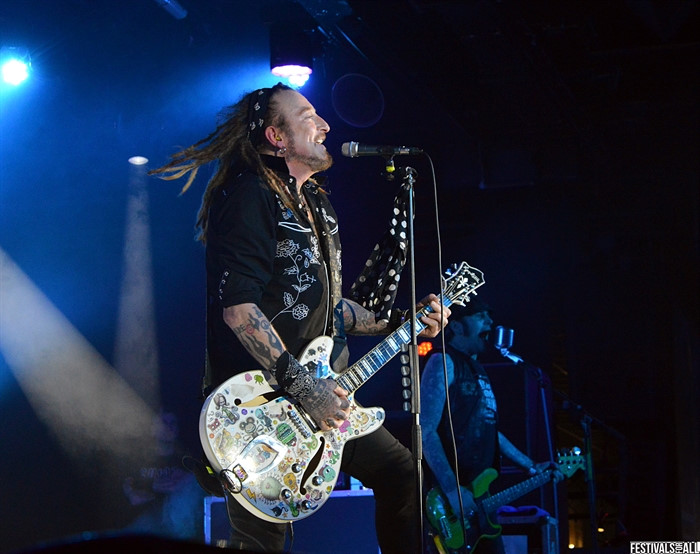 Big Country are rapidly becoming the Butlins Festival House Band… and why not. They have universal appeal across the music landscape, they always engage, entertain, and put on a show. Fine musicians, proud of their roots, and the sheer delight of the Watson family guitar interchanges is truly infectious. Cue raucous singing and good time galore. FFA closed the night with a fine set from The Hot Rods. Masters is sadly missed of course, but the guys put on a splendid show down in Reds. Great crowd reaction and genuine warmth, with the Bazza tribute during ‘Do Anything You Wanna Do’ a poignant moment. Still a band with something worthwhile to say. Rock on lads. 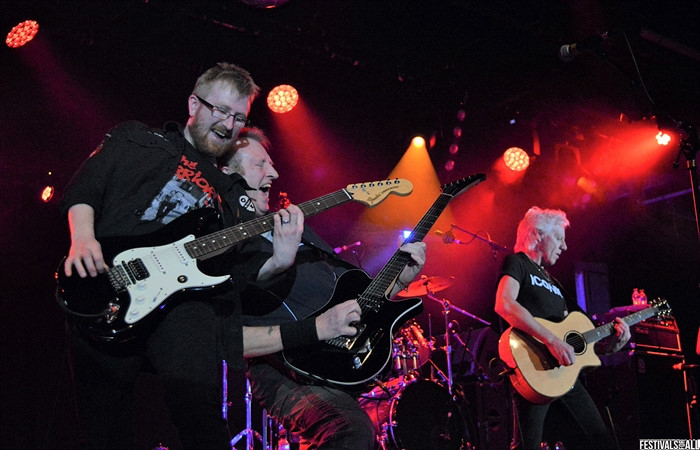 For this Reviewer, Saturday was dominated by one band, and up there for set of the festival. FFA thought Glen Matlock Band featuring Earl Slick were terrific. This was Americana fuelled bluesy rock of the first order. Once those in the crowd expecting some Pistols tribute act readjusted their expectations, and realised they were in the presence of a hugely talented band of musicians with more influences than you could shake a stick at, the whole joint rocked. Slick was the icing on the cake, touring band and session man supreme, he laid down some fabulous licks and overlays to Matlock’s classic blues vocals. A splendid mix of original works and stunning covers, it was perhaps Scott Walker’s ‘Montague Terrace In Blue’ that took the absolute biscuit. The only nod to the Pistols being a Matlock/Slick take on ‘Pretty Vacant’ which morphed seamlessly into the overall set dynamic. Excellent. We were blessed – thank you Butlins. 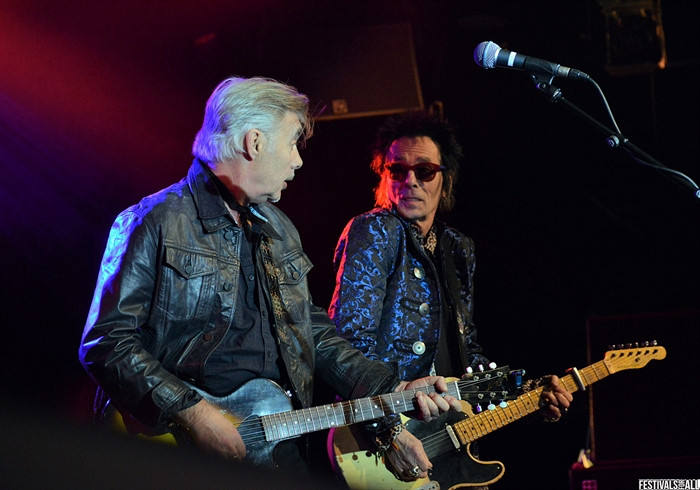 The Adicts – style over substance? I think not! Strip away the costumes, the theatricals, and props and effects and there still lurks a very fine band. Make no mistake, the Adicts put on a show, indeed Warren is an excellent frontman, and mesmerising on stage, but it would all fall flat if not underpinned by a great band, and their set on Centre Stage was rather special. Dealing playing cards to the up for it crowd, ‘Joker In The Pack’ captured it all. Great Stuff. FFA were set for a cracking Saturday night. Now then, some songs define a time or place, others define a whole generation or a culture. The actual songs may differ person to person, but we all have them [Discuss]. For this wizened old Reviewer, the next couple of bands on the bill graced my life with era defining pop-punk masterpieces… yes, I’m looking at you ‘Teenage Kicks’, and ‘The Sound Of The Suburbs’! Adolescent angst and biting social commentary are a heady combo. 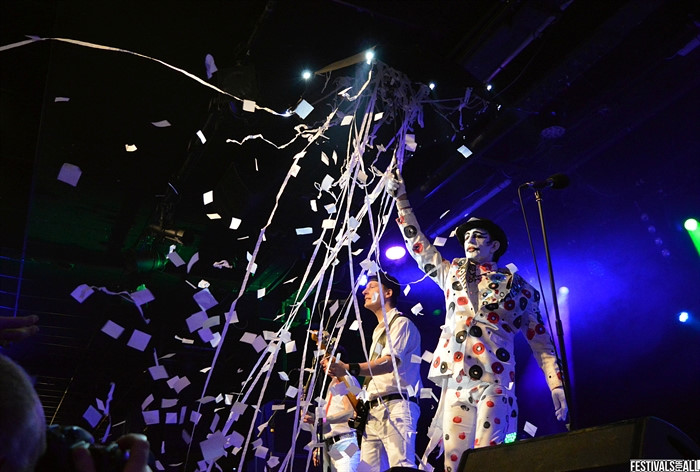 The Undertones offered up another charismatic front man in McLoone for yet another smashing set. All the classics were on display and Reds was positively kicking. This was a throbbing Saturday night. The Members were also right on the button, whilst ‘Sound of the Suburbs’ did for this Reviewer, a rollicking ‘I Ain’t Going To Be Your Bitch No More’ excelled. Hung Like Hanratty… just the ticket for the party kicking-off in Centre Stage. A boozy mosh pit, mad sing-alongs to some, erm, risqué lyrics and great late-night weekend entertainment. We think it was only water being thrown! 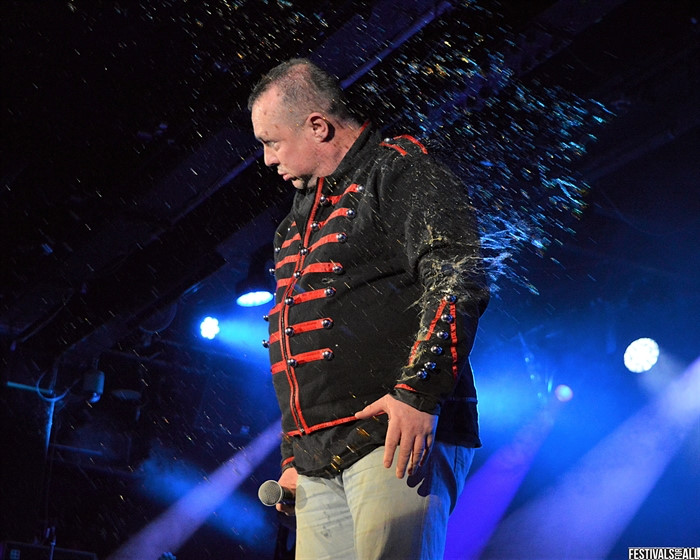 What better way to shake off Saturday nights excesses than From The Jam. The Foxton / Hastings combo aren’t just their own Jam tribute band; they bring a different dynamic and focus to many of the classics. Memories of these guys playing an acoustic format set many years ago peeled back the absolute quality of song writing in the Jam canon. It was a revelation and a privilege, and watching them live and electric is pretty good too! ‘Down In the Tube Station At Midnight’ excelled. Great set. Over on the Jaks Introducing stage, scene of some cracking action, the wealth of emerging talent again impressed. It threw up some oddballs too, like Pete Bentham & The Dinner Ladies; distinctive vocals, Sax, and, actually, Dinner Ladies. You just can’t beat Jaks for variety! Very much a Mod feel to the day with The Chords & Secret Affair up next. 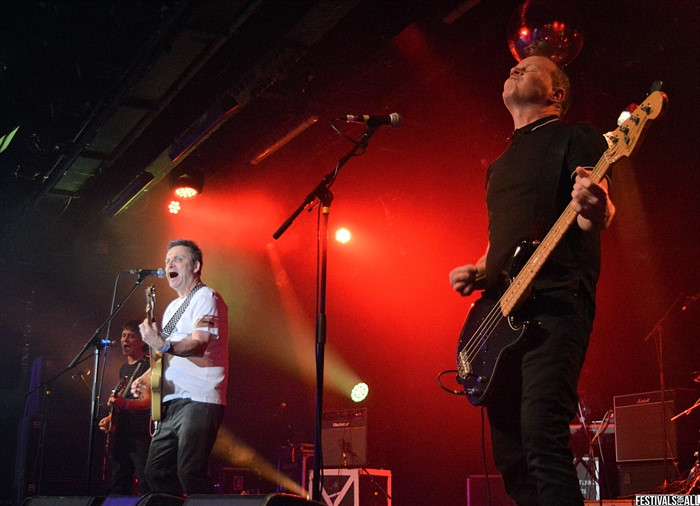 FFA thought The Chords excellent, some fine tunes and particularly slick bass from new recruit Ricky McGuire. ‘Gentrified The Elephant’ was an absolute classic. Secret Affair – what a slick, polished outfit these guys are. They had Reds rocking. Two splendid sets. 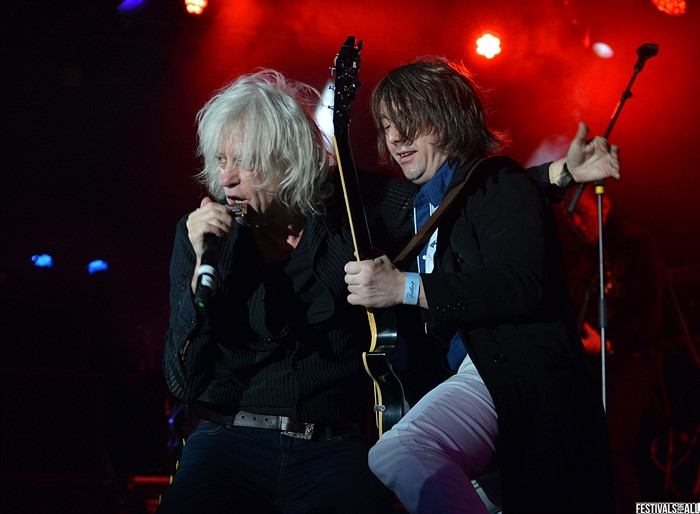 Blimey. The Boomtown Rats! Always likely to be band of the weekend – and they were. Geldof, looking more like a young Jagger by the day, has an immense stage presence and simply owned the stage. A consummate showman who had the Centre Stage crowd eating from his hand from the off. This was no greatest hits set, with the band touring new album ‘Citizens Of Boomtown’. The band were musically splendid and the new album tracks terrific. The set was peppered with reworked classics, and the new tunes and potent lyrics as relevant as their classics of the past. The Rats still have plenty to say, and sound as contemporary as ever; the D&B fuelled beats of the encore outstanding.  FFA thought the whole show magnificent. The Stiffs closed the whole shebang for FFA with yet another hugely enjoyable set. Yet more old stagers doing what they do best – rocking a crowd. Some of Barnes guitar breaks were the best of the weekend. Another fine band. The weekend was full of ‘em. 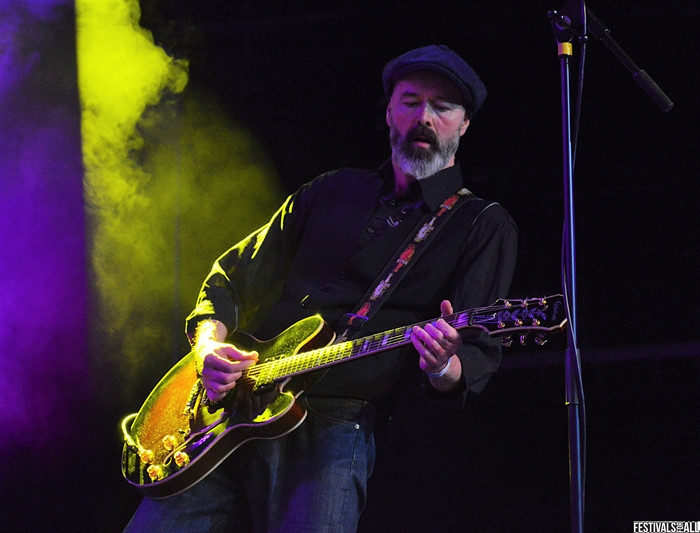 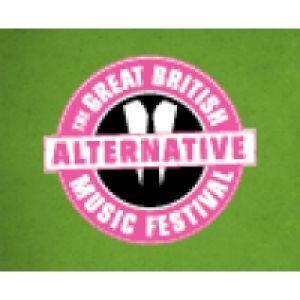