Off The Tracks celebrated its 31st anniversary in 2019. Let that sink in. Despite being an absolutely wonderful peach of an event, many festival goers around the country don’t even know it exists. Let that sink in too. To say OTT still remains one of the hidden jewels in the UK festival crown remains an understatement. For those in the know it’s an absolute gem; a ruby in the dust, a unique House Party of epic proportions.  Here’s why…

Our FFA Reviewers love OTT with a vengeance. We thought 2018 was good (Read the FFA Off The Tracks 2018 Review), but 2019 simply excelled. It’s a very special event with its own unique and magical vibe. The atmosphere is a tangible thing at OT, the air buzzes. A great festival has many components; key to OTT is its location, its ethos, and, most importantly, its people. 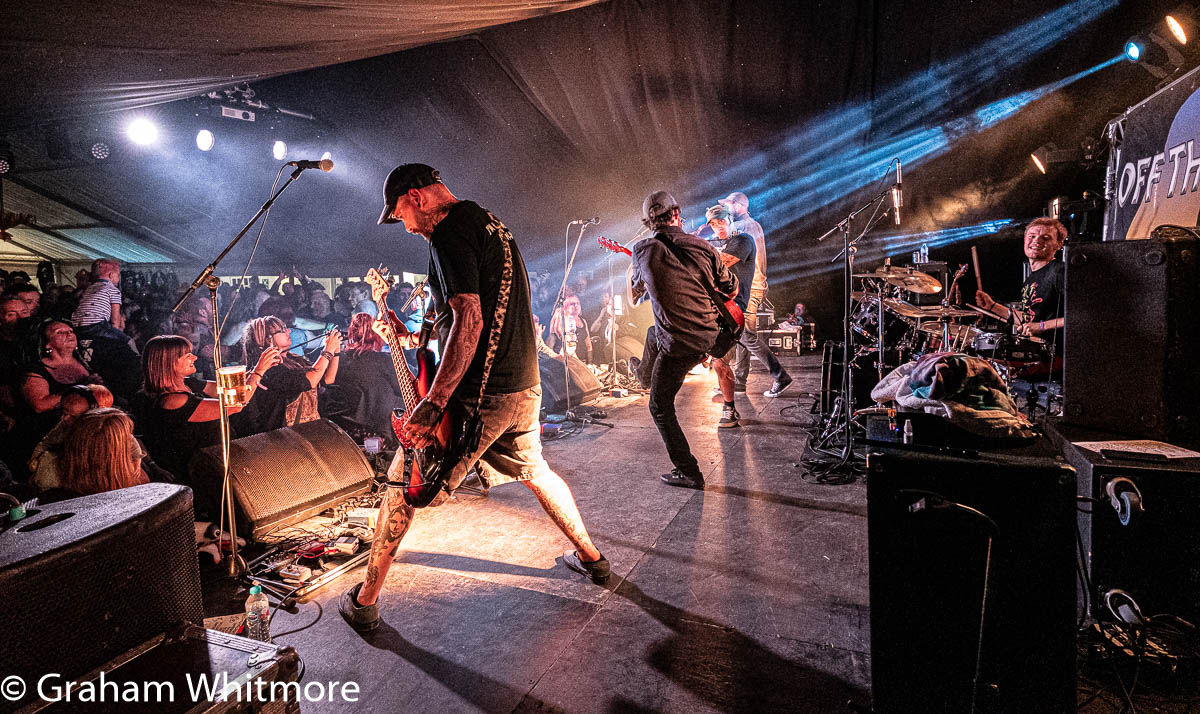 More House Party gathering than festival, the event is held at Donington Park Farm House in Derbyshire. The farm is heavily diversified, and the festival is held in farm buildings centred around the old farmyard. But clock this, some of those same farm buildings have been converted to a year-round conference and wedding centre with a large Pub and attached Diner, plus multiple function rooms and barns, which are all used to host the festival. It’s all pretty unique, and wonderful. Just as an example; the Diner offers venison from the farms very own deer park, alongside a host of veggie options if Bambi just isn’t your bag. The adjacent camp site is also a permanent year-round camping facility.  So, proper brick build facilities, hardstanding and all the creature comforts one would expect.

The festival is all under cover, with four music venues and a lovely Healing Field set in the orchard, plus a variety of stalls and eateries to supplement the very decent on-site Diner. The open farmyard itself hosts Morris, street entertainers and various spontaneous happenings. There is plenty going down for the kids too. So… the location is splendid, and by its very nature makes OTT the ideal end-of-summer-season festival venue. No mud – and very civilised living! 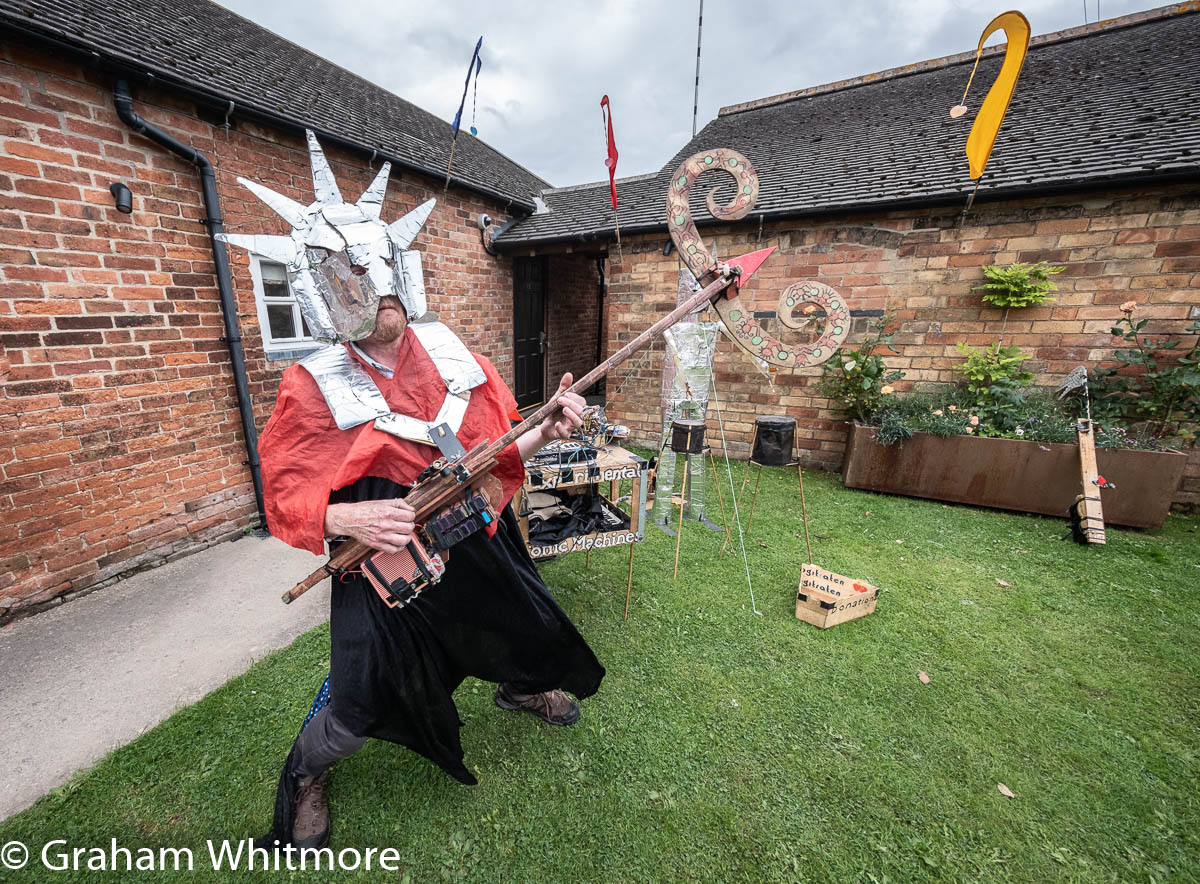 But all the above are only the mechanics of the thing. OTT is all about its ethos and its people. The ethos of OTT is laid back and chilled, with their aim to promote a wildly diverse mash-up of high-quality music and entertainment to an audience as diverse as the music itself. All ages, all types. Indeed, it’s the human element of OTT that sets it apart. The organisers are passionate about what they do. Quality and value underpin everything at OTT. They really do WILL you to have a good time and leave any musical prejudices at the door and, well, just take it all in. Those values cascade down to every single person involved (stewards, security, volunteers, et al). They build a safe little community for you… and what an audience to populate it! The OTT faithful (around a thousand or so rock-up over the weekend) must be one of the most friendly, outgoing, and knowledgeable crowds on the circuit. Everyone forms one big collection ‘whole’. There is a oneness and bonding about the OTT crowd that is a rare and beautiful thing. In our fractured country, we need to share this sense of commonality now more than ever. This Reviewer isn’t going to go all Hippie on you, but let’s just say it’s an old school festival vibe, but with 21st century creature comforts, and be done. 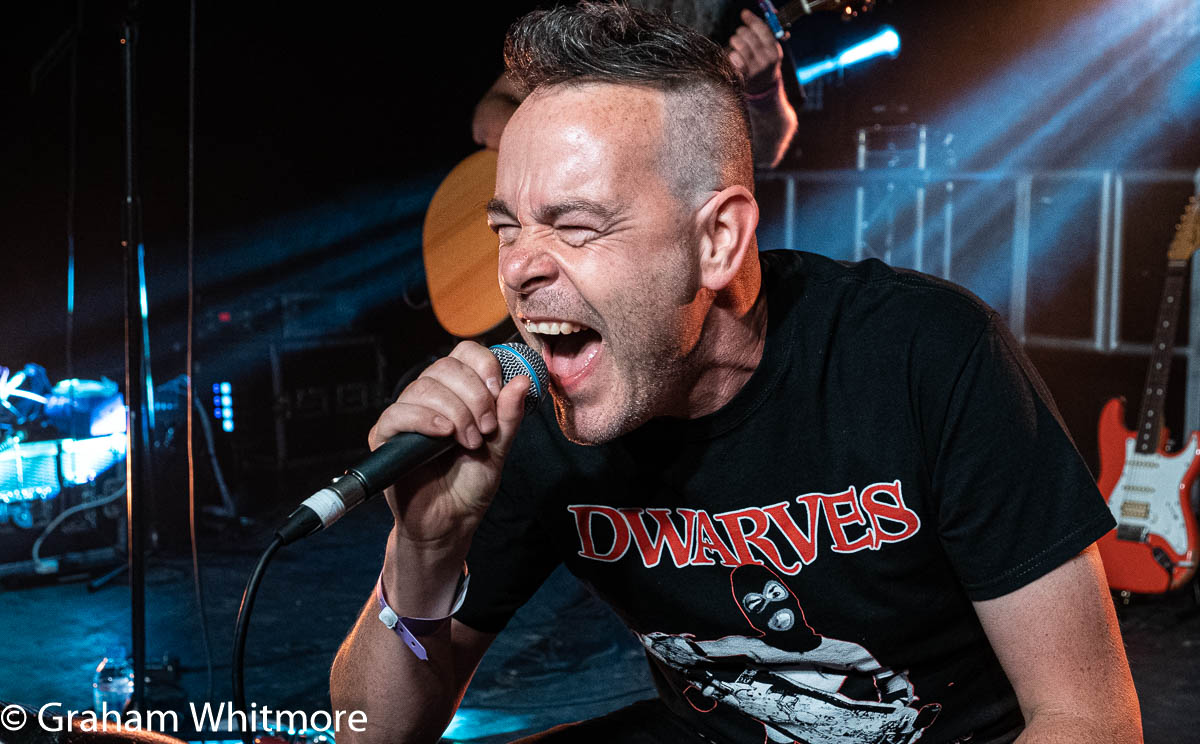 Reviews, as with life, are all opinion. FFA rated 2019 as one of the best and most enjoyable Off The Tracks for many years. The artists are always great at OTT, and, although transitory year to year, they all played they part to maintain that fantastic OTT Vibe. If your ‘Best Act Ever!’ doesn’t even get a mention, then we were, erm, distracted at the bar, or making merry/ face down elsewhere. That’s the way it goes. Who wants a list anyway? So here’s just a taster of the countless on-stage delights that did for FFA…

Headsticks got OTT off to a flying start with some damn fine politically charged malarkey. A cracking one of two sets they played over the weekend, and no, you can't have too much of a good thing. Rather like Ferocious Dog, Headsticks appeared to bring their own bedecked audience with them, and the joint was kicking. First band in and OTT was already up and away. Elephant Sessions very nearly stole the show with an excellent set of somewhat more refined soft edged indie-folk. The Smillie / Taylor interplay of fiddle and mandolin was stunning at times. A fine band. 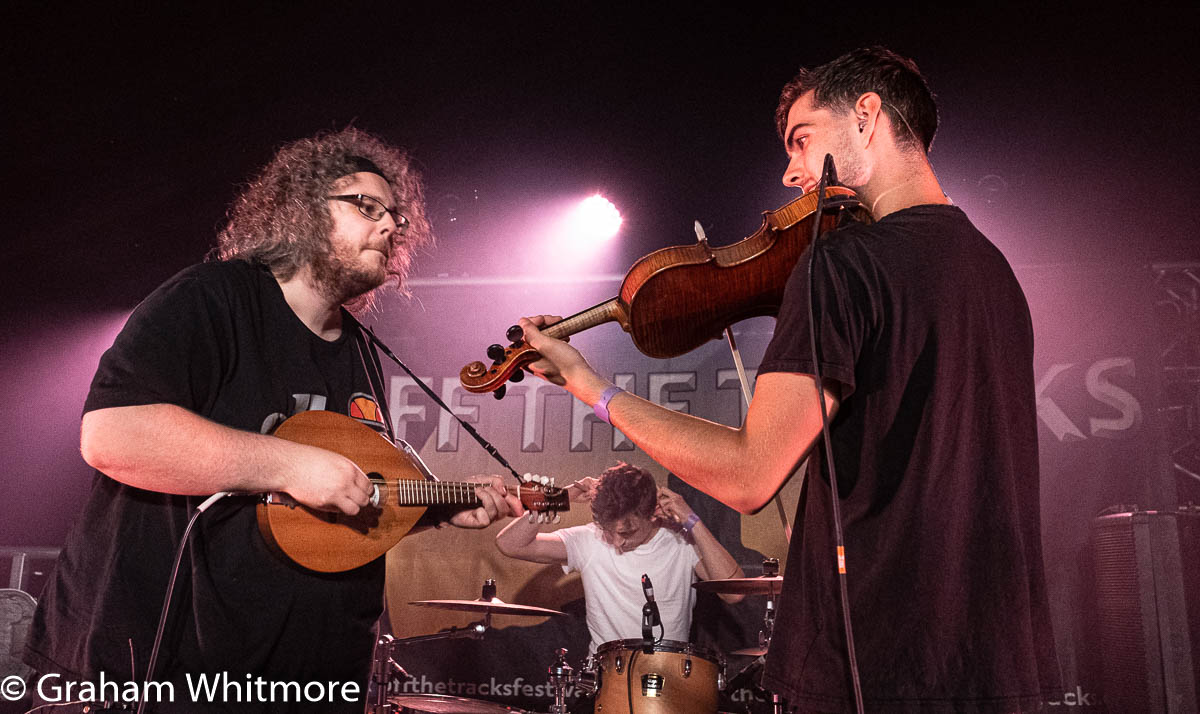 Next up, Della Grants. FFA have sung their praises in the past and will do so again. Some marvellous rootsy blues going down. Tom Best’s gob-iron in particular was a joy to behold. Great set. A few bands in and it already looked like OTT had it well nailed on the line-up front. The wonderful Ferocious Dog simply proved the point. Full-On Friday’s are part of the OTT tradition and FD were a truly splendid headliner. That OTT Vibe had been building throughout the evening and simply exploded when FD hit the stage. What a cracking band. The Hell Hounds were out in force and the mosh pit was no place for FFA softies. Front of stage was just a maelstrom of limbs. This band generate an electric atmosphere and the Marquee Stage was bouncing. Another band to wear their politics on their sleeve; the vitriol and passion of the powerful ‘Blackleg Miner’ made the spine tingle. Long before That Man Booth was carried shoulder high through the crowd whilst playing a blistering fiddle solo – Ferocious Dog had delivered one of the best OTT headline slots for many a year. 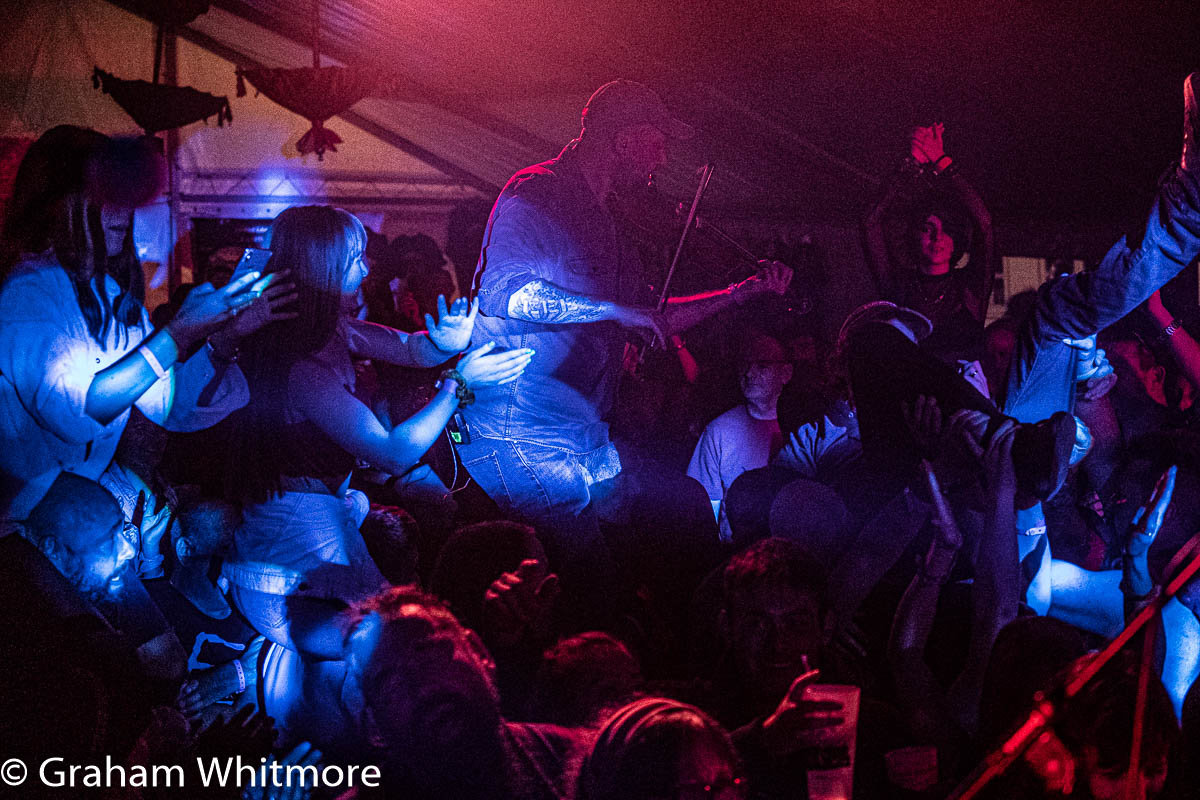 Later, FFA pin-balled between Lil Jim and Hard Rockin’ Amigos. The former being an excellent multi-instrumentalist delighting the late-night Oak Room crowd; the latter playing some blinding Classic Rock covers over in the Black Barn. Their ‘She Sells Sanctuary’ cover being a stunning highlight in a great couple of hours of merriment. Overlay all that with some of the best AV mashups this Reviewer has ever experienced, from the brilliant Addictive TV, and Friday night transpired to be one of the best first nights OTT has produced in recent years. The set was nothing short of an Audio-Visual extravaganza; the audio sampling was as clever as it was splendid, so were the visuals. Combine the two in perfect synch and it was pretty much mind-blowing. What they did with the Jackson 5 / Human League AV mix was exceptional.  What a classic OTT Friday night! 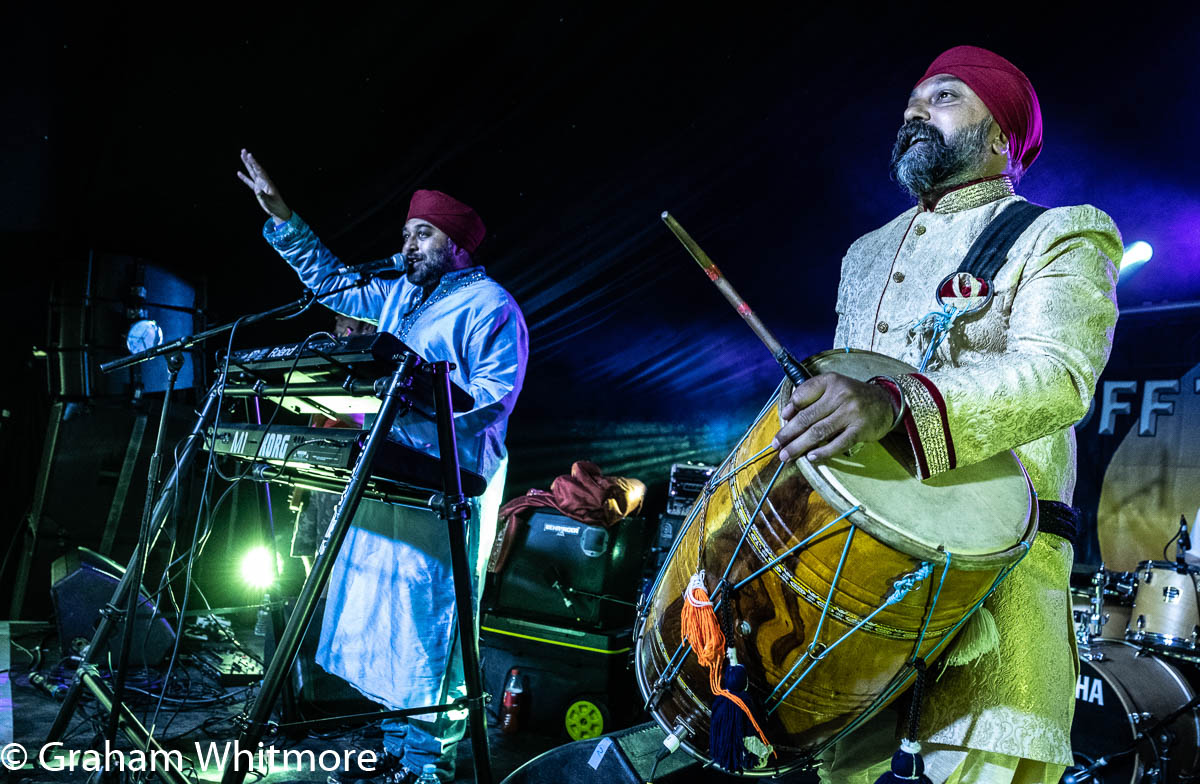 Music genre diversity and excellence are always the trademark of OTT and Saturday once again excelled. Bhangra folk-rock anyone? The always excellent Kissmet put on a right ole’ show. Cue the (infamous) OTT audience participation, and everyone was literally bouncing along to Kissmet’s fusion shenanigans. Yes. They did play ‘Whole Lotta Love’, and yes, it was splendid. FFA staggered in and out of the Fleet Arts Introducing Stage throughout the day, and the standard of some of these (very) young bands were excellent; none more so than The Finiash. Mid-teens, but looking even younger to these haggard old eyes, this Alt-Rock outfit took their opportunity and nailed it. Rough around the edges, of course, but enough potential here to make them one’s to watch. Funk & The Two Tone Baby laid down some thumping beat-box beats to meaty blues overlays to get the Black Barn stomping before some hugely entertaining hard rock, with a soft centre, from Bad Touch ripped up the Marquee. Westwood is maturing into a rather fine front-man, and surrounded by excellent musicians, not least some cracking guitar from Glendinning, this lot are surely developing into a major league rock outfit. Party time with The Neville Staple Band!  Class always shines, and with such a strong back catalogue, this set was always going to fizz along. Skanking Ska heaven. 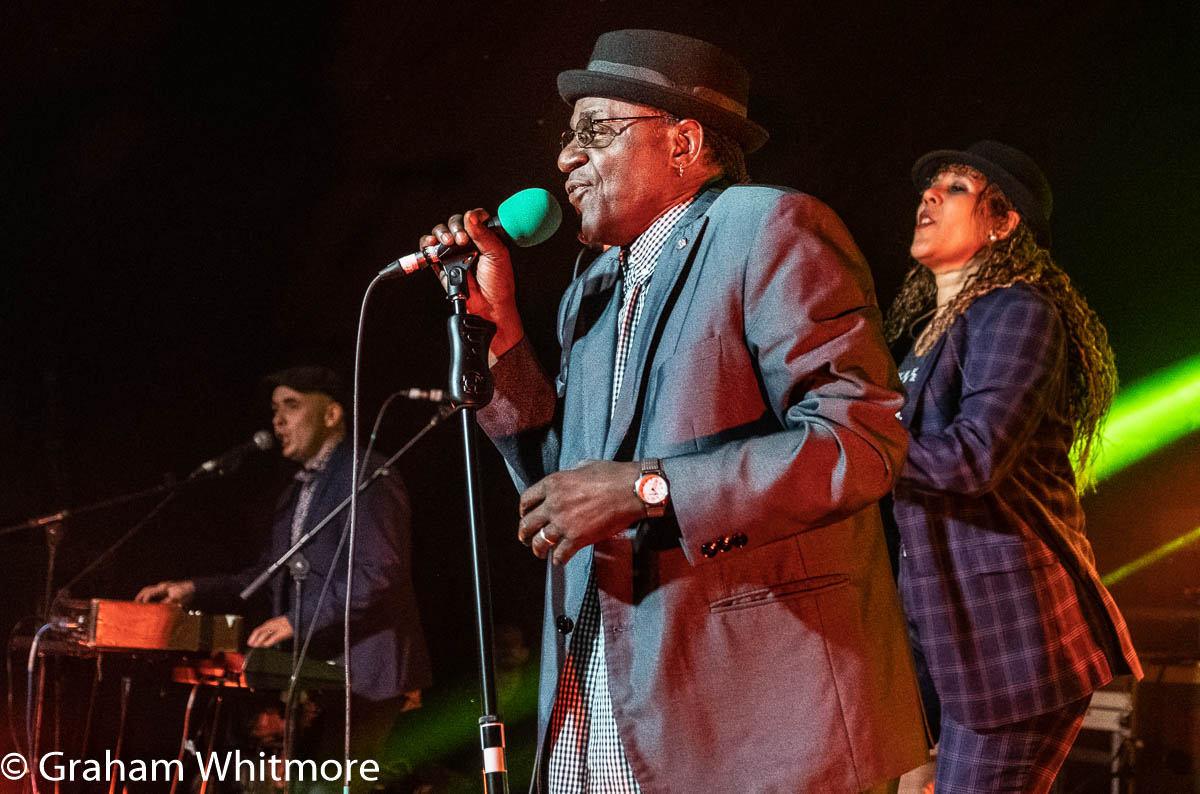 Now then, what this reviewer adores about OTT is the fact that you are just as likely to find set of the festival on a side stage after midnight as you are main stage headliner. So OTT 2019 proved with the frankly stunning Kev Andrews. To witness an artist expose multiple new layers within an age old instrument is a thing of beauty, and this experienced Reviewer stood transfixed as Andrews played some brilliant percussive Spanish guitar, swapping genres and styles with consummate ease. A masterclass. Joined later by steel pedal guitar maestro Jim Widdop in a largely impromptu collaboration, the interplay between classical guitar and the splendid Widdop’s oh so sweet Gliss overlays and fills was a wonderful thing. How do you always manage to pull something magical out of the bag like this OTT? Late doors in the smashing Silent Disco and we were spent. A fabulous day. 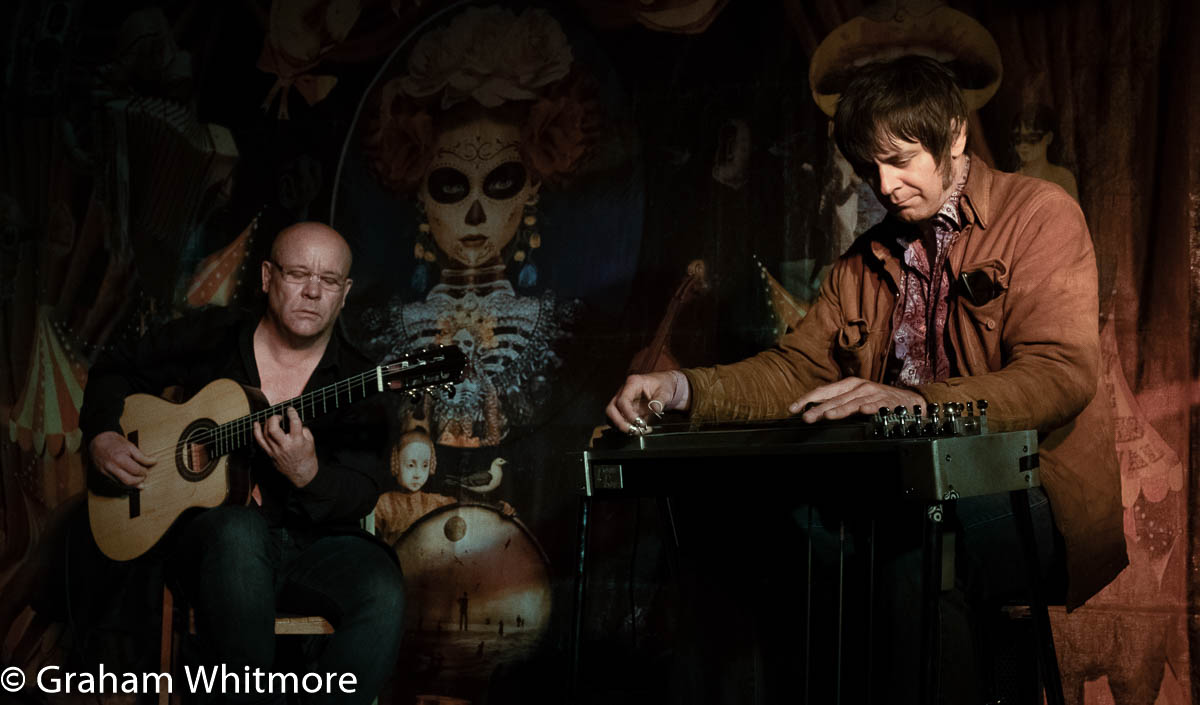 Unwashed and dazed, FFA crawled over to The Energy Orchard early doors for Storytelling with the superb Rachel Murray. Wheels within wheels. Stories within stories. An absolutely lovely Sunday morning of spoken word. A fine spinner of tales and a real delight. FFA love the Lancashire Hotpots. No mere novelty act, these guys mercilessly and expertly take ever cliché of ‘Northern Life’ and thrash them with a stick. Clever, funny, and occasionally rather poignant, (witness ‘Motability Scooter’), this was classic OTT Sunday afternoon programming. 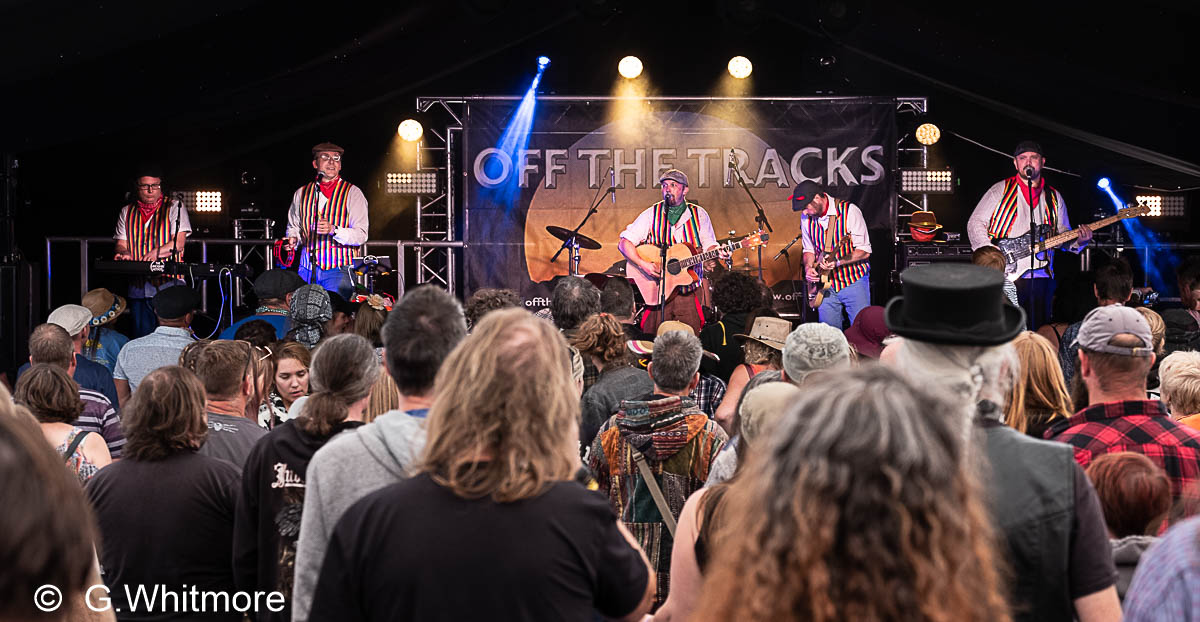 Old stagers Three Daft Monkeys closed the festival with a storming set. Great atmosphere, dancing and bouncing, and a lovely crowd – what’s not to like? ‘Look To The Stars’ and it’s back story probably the highlight in a set loaded with ‘em. Significantly, the band took time out to personally thank OTT organisers Andy & Boz, for giving them one of their first big breaks twenty odd years ago at OTT. For this reviewer that acknowledgement spoke volumes about this festival, its ethos, and the people behind it.

In a world of transient fads, fleeting fame, and short-lived fashions, OTT has permanence. Andy Cooper and Andy ‘Boz’ Borys have made their mark here. Off The Tracks matters. It’s special. It’s a genuine EVENT. They have built a community here. If making people happy throughout your life has any value at all in this world – then this pair can sleep the sleep of the blessed. Long may this Hidden Little Gem of a weekend continue.

Off The Tracks Festival 2020

Off The Tracks Festival 2019

Off The Tracks Festival 2020

Off The Tracks Festival 2019