Lakefest 2018 was a fabulous festival and a success on every level. It was also rather special. Here’s why…

Now listen up – this review will attempt two things. Explaining why Lakefest is absolutely excellent, and secondly, explaining why it’s very very SPECIAL. The first is easy – there is simply nothing to fault. For a small-medium festival to cram so much value, quality, and content into a weekend is remarkable. FFA Reviewers thought Lakefest 2017 was a cracker; 2018 simply excelled. The facilities were top on, the site and location lovely, the sheer variety of experiences, imagination, creativity, and organisation were all first class. This was a multi-media weekend package of the highest order. Tick it all off; BMX displays, SEGA zone, Land Rover trials, Spoken Word, Comedy, Fun Fair, loads for the kids and genuinely family friendly, plentiful food and drink, Ales starting at three quid (oh yes!), a hidden Rum Bar in the woods, multiple stages – with at least FIVE dance, bar, and live music scenes continuing to buzz away into the small hours, and a strong and varied line-up – these are not even the half of it. I could go on – but you get the picture? So far so good. 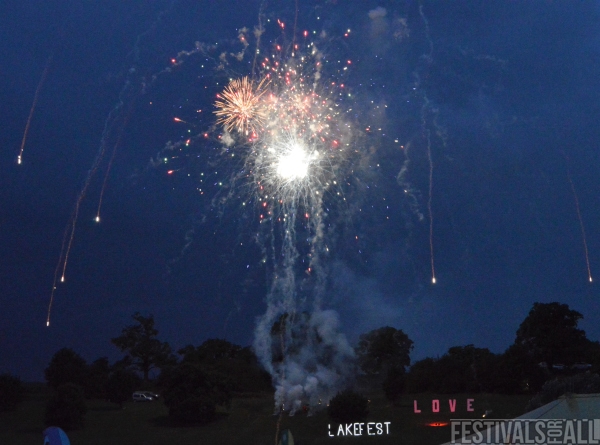 Describing why Lakefest is so special is the challenge. This experienced reviewer simply loves the festival scene but rarely gets such a raw emotional hit as was experienced at Lakefest. Let’s cut to the chase up front – it’s the bloody people! Everyone involved - organisers, staff, stewards, and not least the wonderful, fantastically diverse crowd are all active players here. Not a single person at Lakefest is passive, they all help form a marvellous, loving, festival community. The VIBE is a tangible, living beast here, it makes the air crackle. The crowd lock on to it. They are the most friendly, open, and goodtime audience you could wish to meet with more characters than you can shake a stick at. They just know they ARE the festival. In a splintered, fractured world, where division and hatred stalk the land, Lakefest kicks back, it faces it all down. Lakefest is a little oasis, a celebration of humanity, proof positive that the world can be better if we only try. It’s a rare and beautiful thing. People at their best. It’s the Lakefest Love. The Lakefest Family. 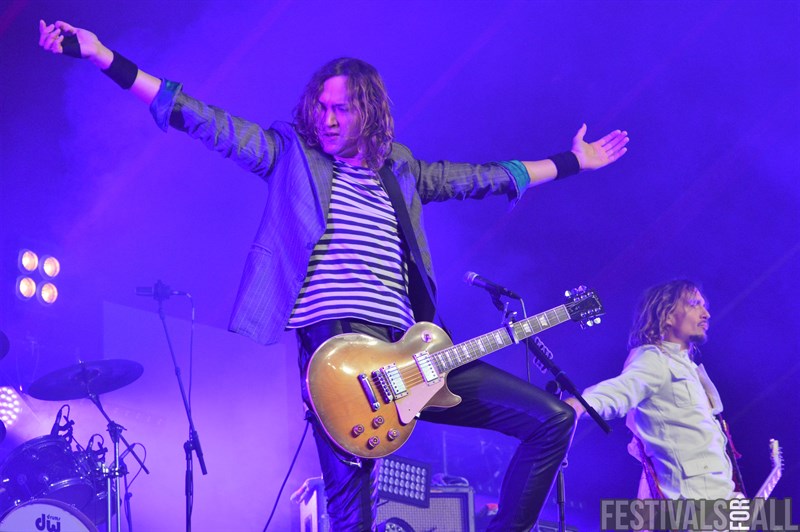 Some festivals never quite manage to be any better than the bands they host, a few, like Lakefest, manage to transcend that; the festival itself and its people becomes the big deal – the Main Event - the real reason for coming … the yearly line-up, after all, is just transitory. For the Lakefest organisers to achieve that feat so comprehensively in such a few short years is nothing short of extraordinary. Of course the acts matter, but here’s the thing – they are just one of a myriad facets in a wonderfully complete weekend at this festival. Lakefest has already achieved that rarefied status and trust level that you could safely book in advance for future years, without knowing a single band up front. As I said – remarkable for a festival so young.

Now all reviews are opinion, and this happens to be FFA’s. If you were blessed to walk the Lakefest earth that August weekend you’ll have your own favourites and ‘Lakefest Moments’. If we missed ‘em then fair do’s; we were either stomping elsewhere, hammered, talking nonsense, or asleep… so it goes. We missed more than we saw, and even without the Geoff Daff show, the sheer scale of offerings at this wonderful festival overwhelms, so here’s a filtered snapshot of just a few FFA personal highlights… 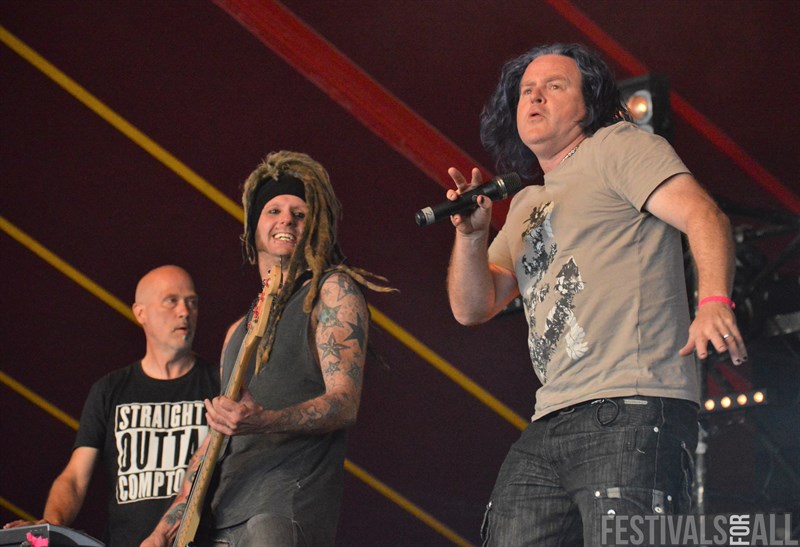 The excellent ‘John Robb Interviews’ over in the expanded Pen and Parchment were a delight. Robb is a man of considerable and varied talents (witness the raucous Membranes set later in the weekend); an accomplished interviewer, Robb has the rare gift of peeling back the inner workings of his guests like an onion. A few pertinent questions and an entertaining rollercoaster of a ride typically ensues. Pop Will Eat Itself were first up for FFA. A cracking hour exploring the band’s very soul and an excellent lead-in to their live performance. Comparisons to the hardcore rock-rap of The Beastie Boys do PWEI a disservice – they are their own men and the crowd went wild to a blistering high energy set. Peter Hook and The Light felt the Lakefest Love over on the Abbey Stage, and crowd and artist were as one in the retelling of Hook’s long and eventful career. As always, there was little need for hackneyed ‘audience participation’ interludes with the Lakefest audience – they sang, danced, cheered, and clapped without prompting – lost in the moment. One huge sing-along ensued for ‘Love Will Tear Us Apart’ – obviously. A fantastic buzz that lasted all weekend. 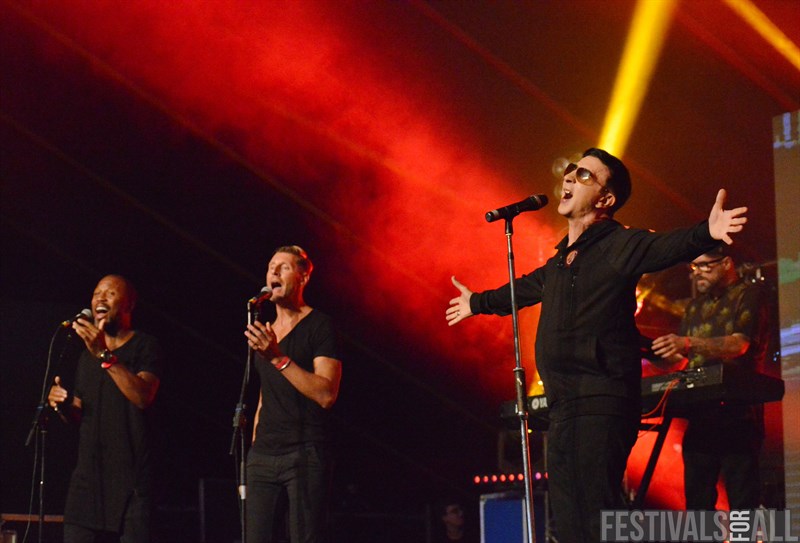 Same reaction for Marc Almond’s polished Art-Pop beats later in the evening. The Abbey Stage was bouncing! No more so than for headliners The Darkness. What a set; the guys know every rock & roll trick and flick, every rock star posture – and the crowd loved every minute. It was difficult not to get clattered by an Air Guitar in the pulsating bedlam of the audience as Hawkins and Hawkins delivered pretty much a rock music extravaganza. Excellent. Over on The Floating Globe FFA caught the youthful exuberance of entertaining ska funk outfit Maitree Express before some stunning folk-rock from the wonderful Urban Folk Theory. Claiming with a straight face that folk music does not centre on Sex and Death (and sometimes not in that order), the band, nonetheless, delivered a superb set of classic folk tales. Fine musicians. 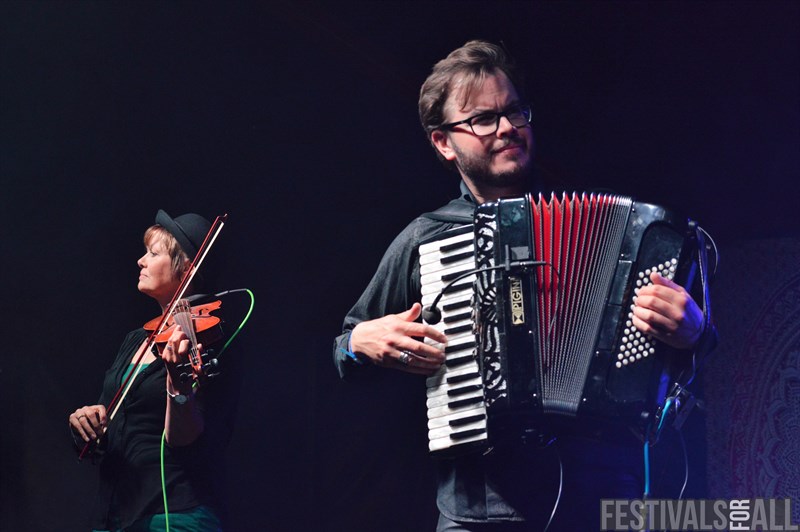 You just can’t knock The Wurzels for entertainment value. All the hits were on parade – plus some electro beats! Great fun in a packed Globe. Splendid local outfit Front Runner had FFA dancing in the After Hours tent – remember it’s live music at Lakefest through until 2:30am people! FFA finished the night (or the night finished FFA) back in the Floating Globe with DJ Shippers… of which more later. 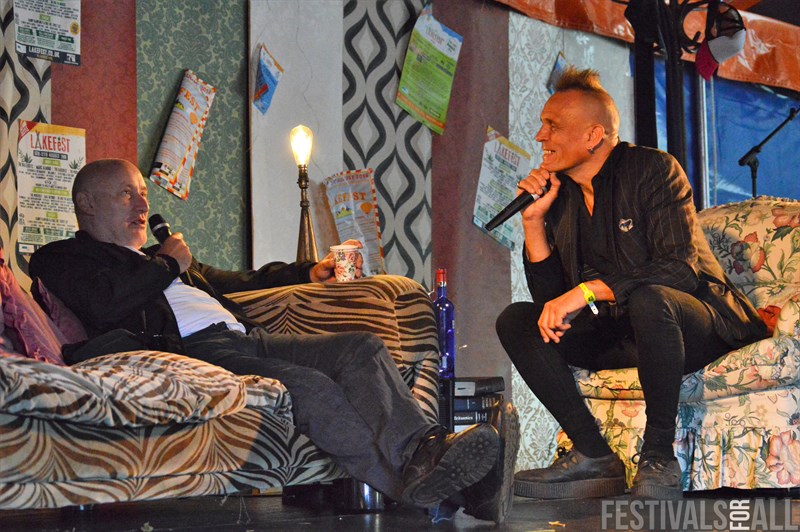 Lakefest you spoil us – John Robb vs Jah Wobble in The Parchment with Robb again teasing profundities (and profanities!) from his guest. One of the many highlights of the weekend. Wobble is an absolutely brilliant guest, interesting, articulate, intelligent, moving, and oh, very funny. The Pen and Parchment is rapidly becoming a true jewel in the Lakefest crown. Spoken Word events are wonderful and Lakefest absolutely nailed it this year. Saturday was a cracking day all round. FFA were everywhere and nowhere simply feeding off the vibe. Once again, the back-to-back offerings on the Abbey Stage were exceptional. If Lakefest ever needed an anthem (and it really doesn’t), then look no further than The Farm’s splendid set. With ‘All Together Now’ the band encapsulated the Lakefest Love full on. The crowd lifted the bloody roof in song. It was yet another little ‘Lakefest Moment’. The feeling of oneness, that Lakefest community bonding, the shared experience – it made the spine tingle. This grizzled old Reviewer came over all emotional to be part of such a lovely collective experience. What a bunch of people the Lakefest Family are. We were blessed. 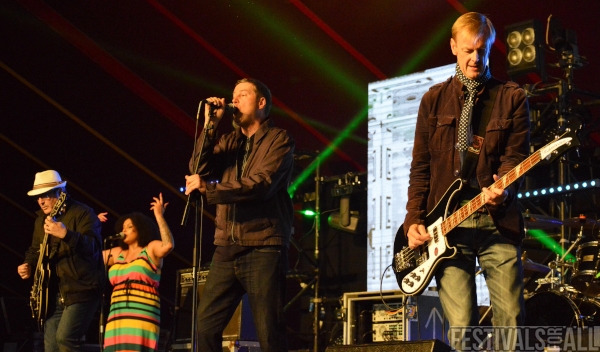 A fantastic full-on set from Dub Pistols exploded with boundless energy. Ashworth and his merry band are exceptional live and the ethos of crowd pleaser ‘Keep The Fire Burning’ again captured the Lakefest vibe to a tee. Spendid set. Talking of crowd pleasers, Reverend and the Makers were absolutely on the button. A promotors delight; one of THE festival bands guaranteed to entertain, and entertain they did. Yet another highlight. The Waterboys – what hasn’t already been written? A truly class act to grace any event. Absolutely wonderful and yet another amazing crowd. What a way to close the Abbey Stage. Now then, Lakefest provides plenty of late night DJ scenes with most flavours of EDM on offer, and very fine they were too, but FFA returned once again for DJ Shippers. If the crowd are the beating heart of Lakefest then DJ Shippers is taking the pulse. The man knows his audience; he reels in the mood and then feeds it all back. Everything from cheesy pop to rock classics is in his mix... and it all works perfectly. The entire arena seemed to be stood on a hay bale dancing and punching the air. A cracking late night Lakefest scene. Oh, did I forget to mention the awful weather? It didn’t matter – Lakefest took the very worst on offer and simply spat it all out. Vibe ONE – Rain NIL. 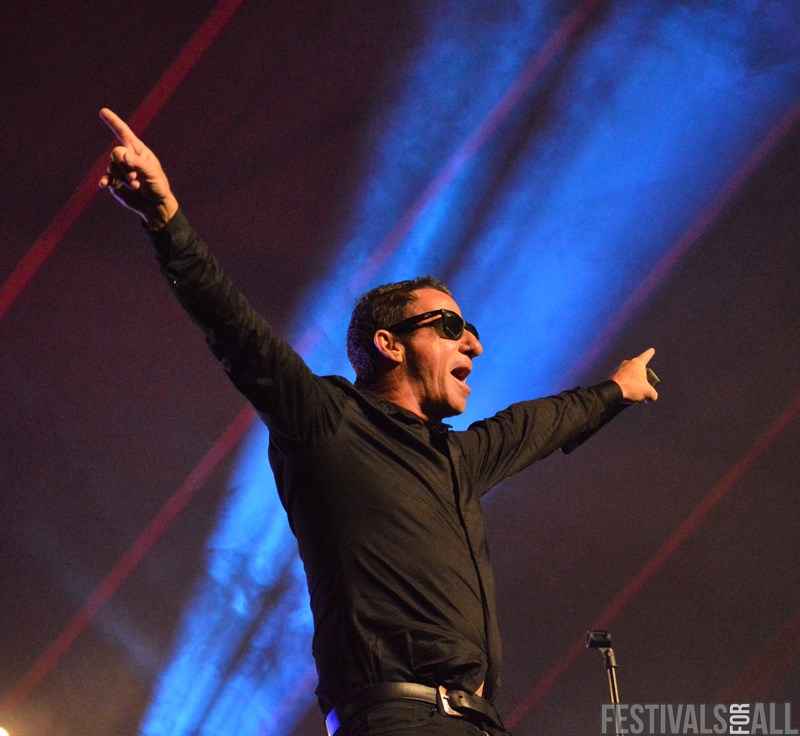 Buoyed by tots of gin from those excellent folk over at The Cotswold Mule, Sunday just disappeared in a rush of good-times. Festival favourites The Roving Crows set the scene with another splendid outing, with Downes-Hall’s percussion a constant highlight and ‘Days In The Sun’ stealing an excellent set. Melanie C !!! Never, ever, never, prejudge an artist. This know-nothing reviewer approached this set with low expectations and left having witnessed arguably Set Of The Festival. The woman was simply fabulous. Slick, polished, in wonderful voice, and astute enough to surround herself with high calibre musicians. This was no Spice Girls tribute act; equally confident in her own back catalogue, new material, the odd cover and yes, some SG classics in the mix too, the set fizzed along. Immensely likeable and self-effacing, Ms C had the crowd eating from her hand. A wonderful atmosphere and proof positive that Lakefest are on to a winner with their multi-genre music policy. The old cliché of ‘something for everyone’ is still ringing in my ears. 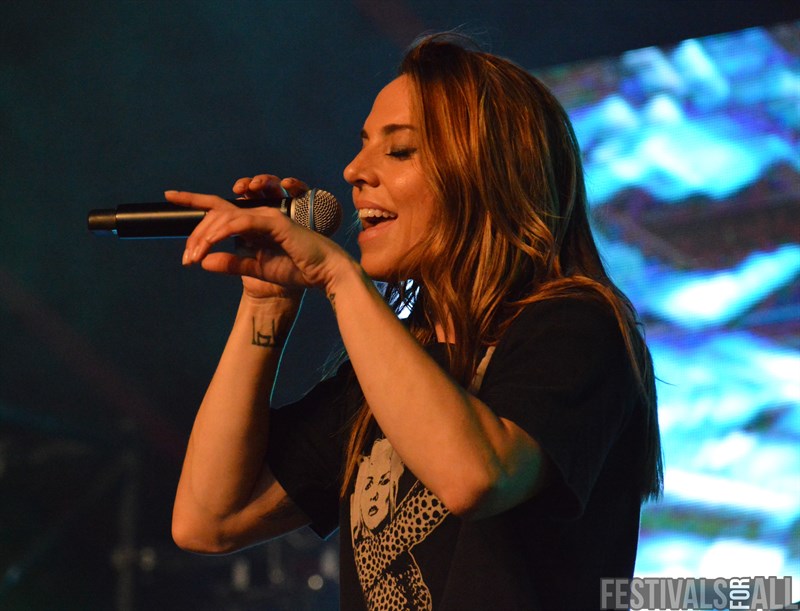 The BBC Introducing stage was a delight all weekend with Silverlake probably taking the biscuit. Then the boys from Toploader and The Proclaimers rounded things off very nicely indeed before the famous Lakefest Silent Disco. It’s an Institution. It’s Huge. It’s the best of its kind this experienced Reviewer has ever experienced. The Lakefest Silent Disco is the ultimate Gathering Of The Clans; the final get together, the last group hug, the hive mind as one, the many becoming a single joyous whole. If one moment captured the very essence of the Lakefest Love then this was it. Tradition rightly dictates ‘Hey Jude’ closes this festival. You didn’t need cans by this stage – you could hear this lot from space. The feeling of belonging was frankly overwhelming. Then I noticed it, though the cheering swaying sea of beautiful people. The crowd were moving to front of stage, slowly at first, then in their hordes. Front of stage stood a lone figure, arms aloft, facing the world. It was Head Steward Geordie, Abbey’s dad, leading it all, right there, on the Abbey Stage. A powerful message of the fortitude and endurance of the human spirit. A beautiful moment in time that felt so right. The Lakefest Family had come together to honour their own. 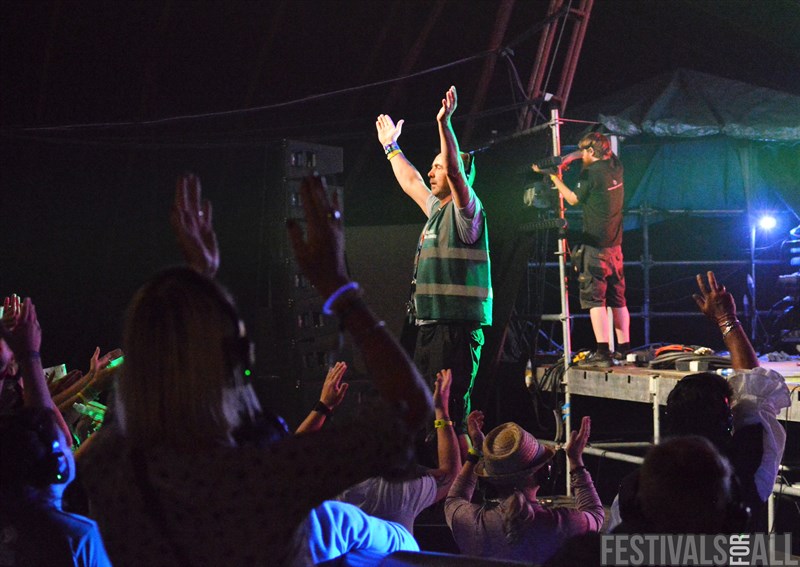 So there you go. See why its SPECIAL now? Lakefest Love. Bring it on. 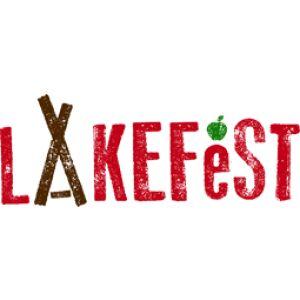