This incredible weekend started off later than planned due to wheel bearing problems with our beautiful VW Campervan. Having already completed a tantalisingly close round trip with the AA, it wasn’t until late Friday afternoon, that we arrived on site in the glorious summer sunshine. The winding road that takes you from the A713 down deep into the Old Holm of Knockengorrach Meadows was littered with panting spread-eagled sheep huddled into every crevice of shade they could find.

As we approached the festival site through the curvaceous ditch edge lanes we could see the shimmer of the river enticing people in and smiles, sparkle and turned down wellie tops everywhere.

After a short push to get unpacked and packing on our backs the right supplies, we strolled down into the festival site, enjoying the sounds as they sifted up through the fir trees and excited you on the final approach.

The site had been a bit upgraded since last year’s visit and looked amazing. As we wound round the new entrance lane by the Sheiling Stage we were greeted by a cacophony of sounds weaving across to us and were in quite the dilemma as to where to go first! Deciding on finding our friends at the main stage, we hot footed it to the grass topped Bo-Airigh Stage with its central Knock Highland Coo decor and commanding presence. Although the site seemed busier than I ever remember seeing it, we found them all easily. But boy did we have some catching up to do! The sunshine had certainly spurned everyone onto the site, into the sun and happy sun kissed faces revelled everywhere.

It’s always nice to see dogs at a festival and Knockengorrach is a very dog friendly place. We could not believe that people remembered the old boy Stan the Border Terrier from last year’s Knock adventures. As he waddled about and made friends, so indeed did we. He found it rather exhausting. 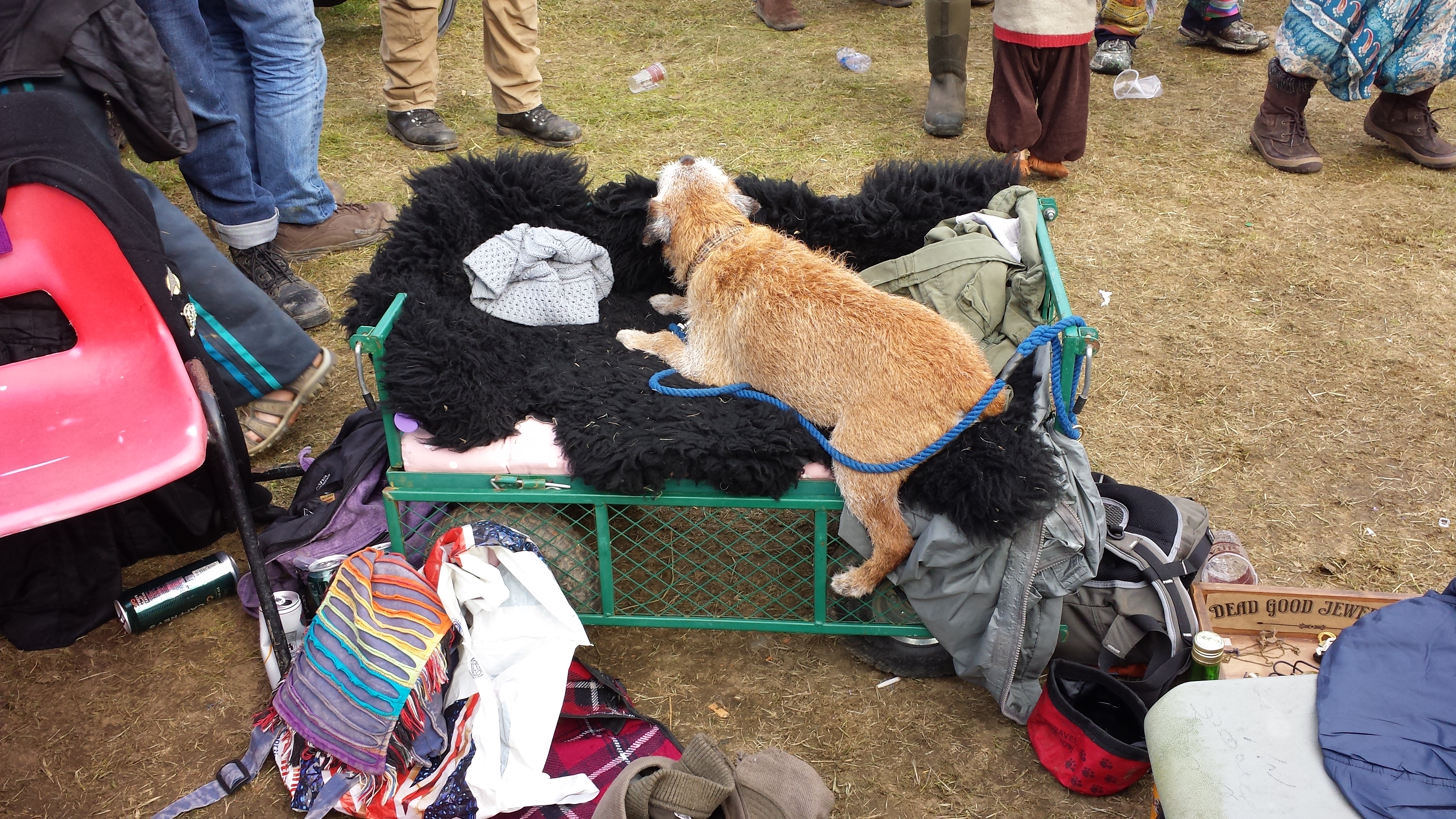 Glitter, feathers and hugs in abundance it wasn’t long before the first few ginger ciders from the Fraoch Caberet Bar stage had a few of us wandering around the far end of the site.

A flying visit round the acoustic village, Weirdigans and the Longhouse, which seemed to be shut this year. A quick browse at some of the incredible stalls, admiring an amazing assortment of goods and wares, feathers and hats, stones and gems, ponchos and cravats. It’s just such a pretty site with everything just right. We found stunning art work, stone work, wood carving and many families joining in. We opted to return to the Bo-Airgh stage to rejoin the gang as the sun was setting.

Orkestra Del Sol took us through the sunset with their enthusiastic big brass sound. Very dramatic, eclectic and making us all ecstatic. Really very impressive and progressive, we were all up, dancing and prancing to the end of the light. 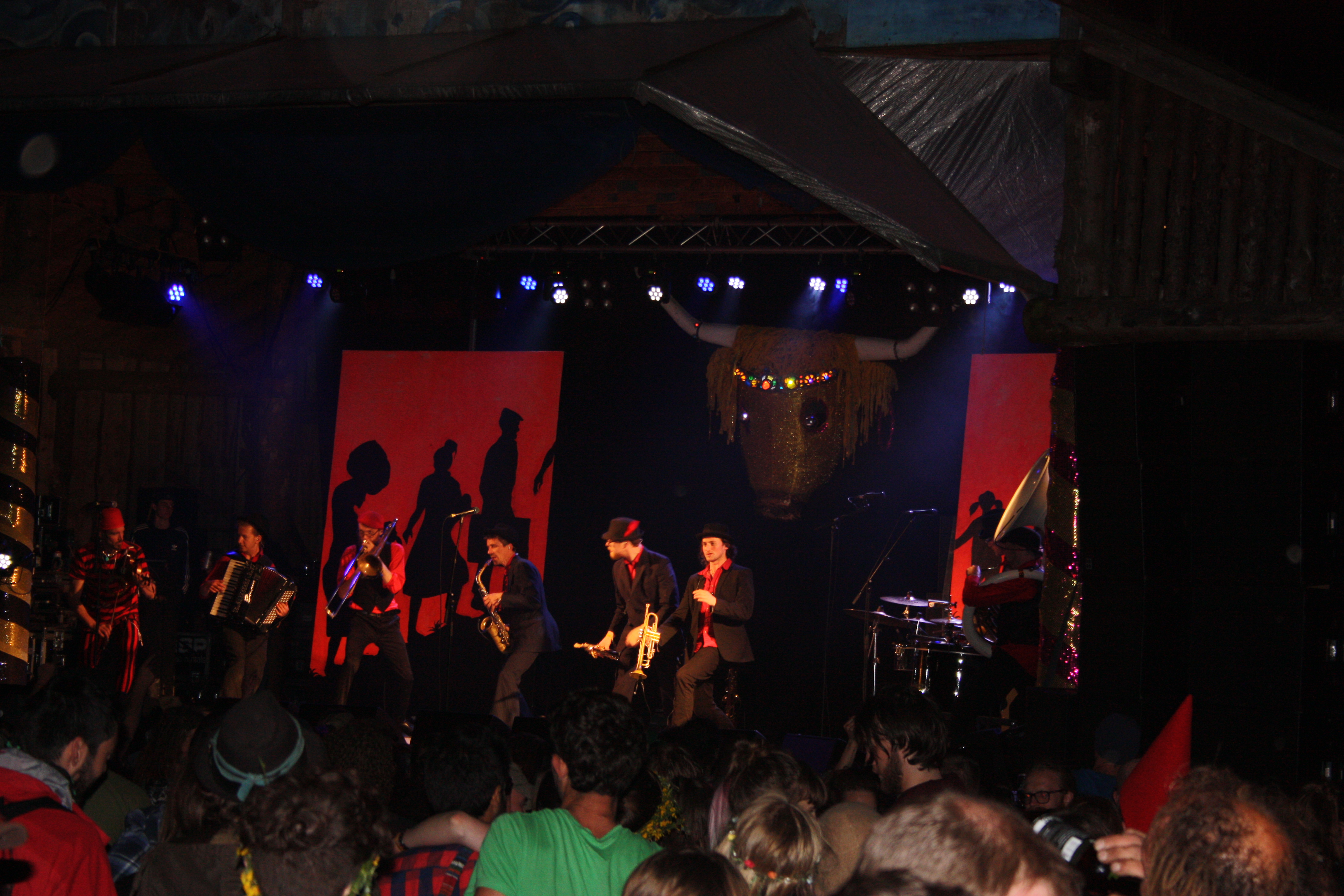 Next up was the finale act for the main stage that day, Skerryvore. This impressive collection of musicians delivered to us a soul thumping, feet jumping good set of fiddly diddly melodies accompanied by booming bass beats that totally tapped our feet 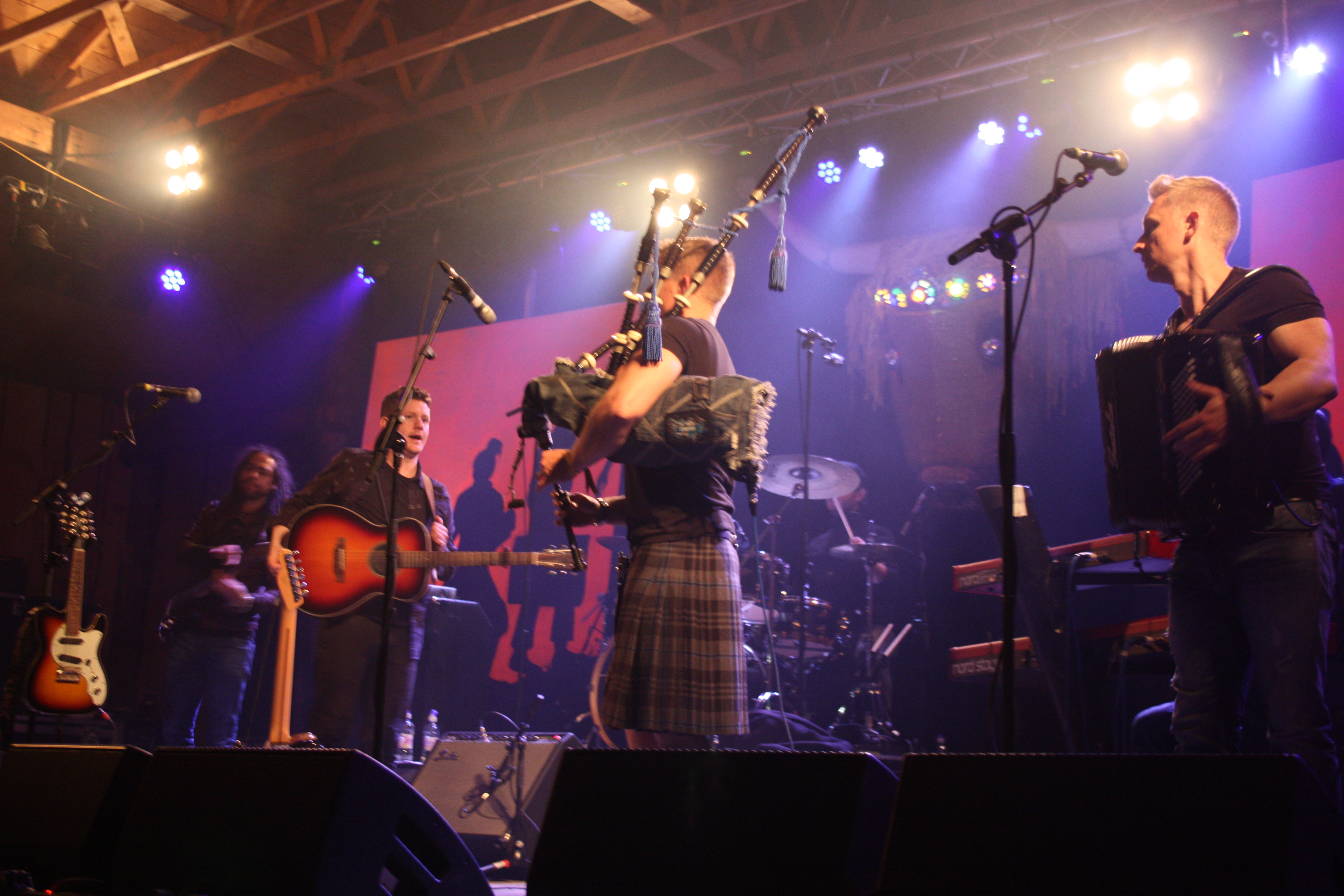 A long sit down was needed afterwards around the communal fire pit as the temperature started to drop and the stars began to shine. Cups of hot chocolate from the Soundbite café were swapped for the wine.

Some of us outlasted the family gang and as they took the kids to bed, we took ourselves across to the ever pumping, most enjoyable Sheiling stage tent to catch the banging tunes which always pump from its belly at night. We danced the night away to Optimo and then Auntie Flo, both of which had our best moves and groves mashing up the dance floor.

We the skipped on over to Maddie’s Mash Tree and danced the morning in with the Jamin Nimjah. Everything we heard all weekend from Maddies Mash Tree was fast paced, charged and raced. Fantastic tunes from a bunch of loons, who kept the beat so hard and dirty, yet eclectic, it was always an intense mix of brilliant electric trance off to dance off.

Finally we climbed the grassy hills to look out over the Dodd o’Cairnsmore Hill and sat waiting for the sun to crest the trees. For a couple of hours, just enjoying the breeze, the sounds and the view of the festival in a strange mix of waking up and going to sleep below, before we wound our way back down with glee into a fire warmed teepee.

A spectacular end to day one of fun in the scorching Scottish sun.

Saturday began later than planned but then Friday had ended later. The sunshine was sizzling again and by midday there was nothing to do but sit back and relax. We enjoyed river walks and hilarious talks, discovering new friends around river bumbling bends. We dipped our toes in the stream and swam in the burn, listening to some friends singing with guitar, each taking a turn.

It wasn’t long before the sun got low again and we realised we had better tear ourselves away from the stunning setting and get our acts together for the festival and get in!

We wandered aimlessly for a while, enjoying a pizza from the Woodburn Pizza company, Crepes from Mutleys and more ginger cider. We settled with everyone in front of the Bo-Airigh stage to watch the funky and hilarious Samson Sounds. They had us dancing, laughing, grinning and spinning. As they dished out banging beats from a laptop musician with his top off and his dance moves springing him around the stage like a hyperactive grinning raver, clearly having a great time himself. The brass accompaniment had hilarious leggings, with their tops off, also looking like they were really enjoying themselves. 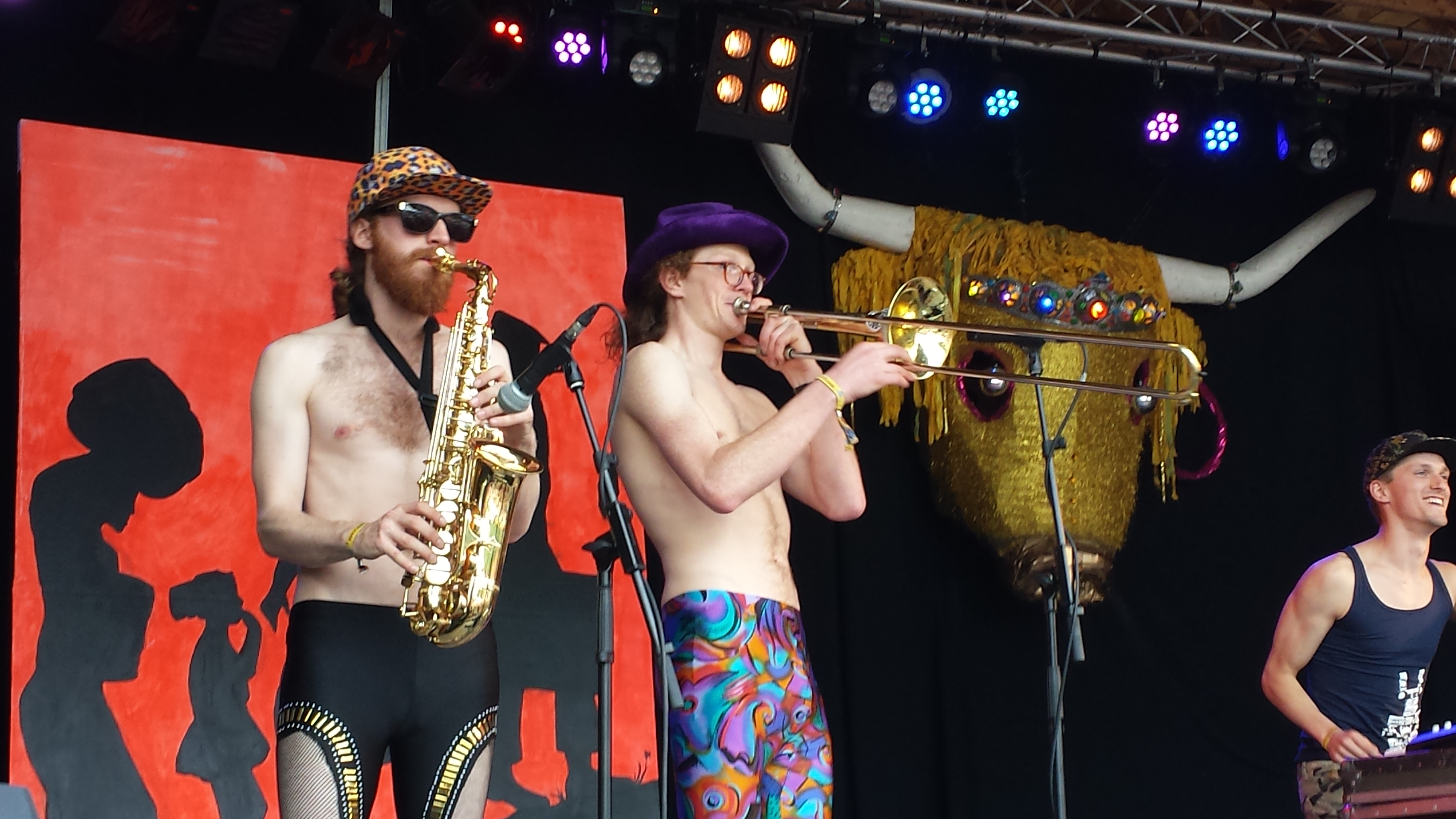 The vocalist and guitar player were too cool for leggings but delivered incredible skills. For one of the finale tracks, Samson Sounds brought two lovely energetic ladies onto the stage, who had been running exercise workshops down at the Tallyn Tent (I cant remember if it was yoga, tai chi or some other…) 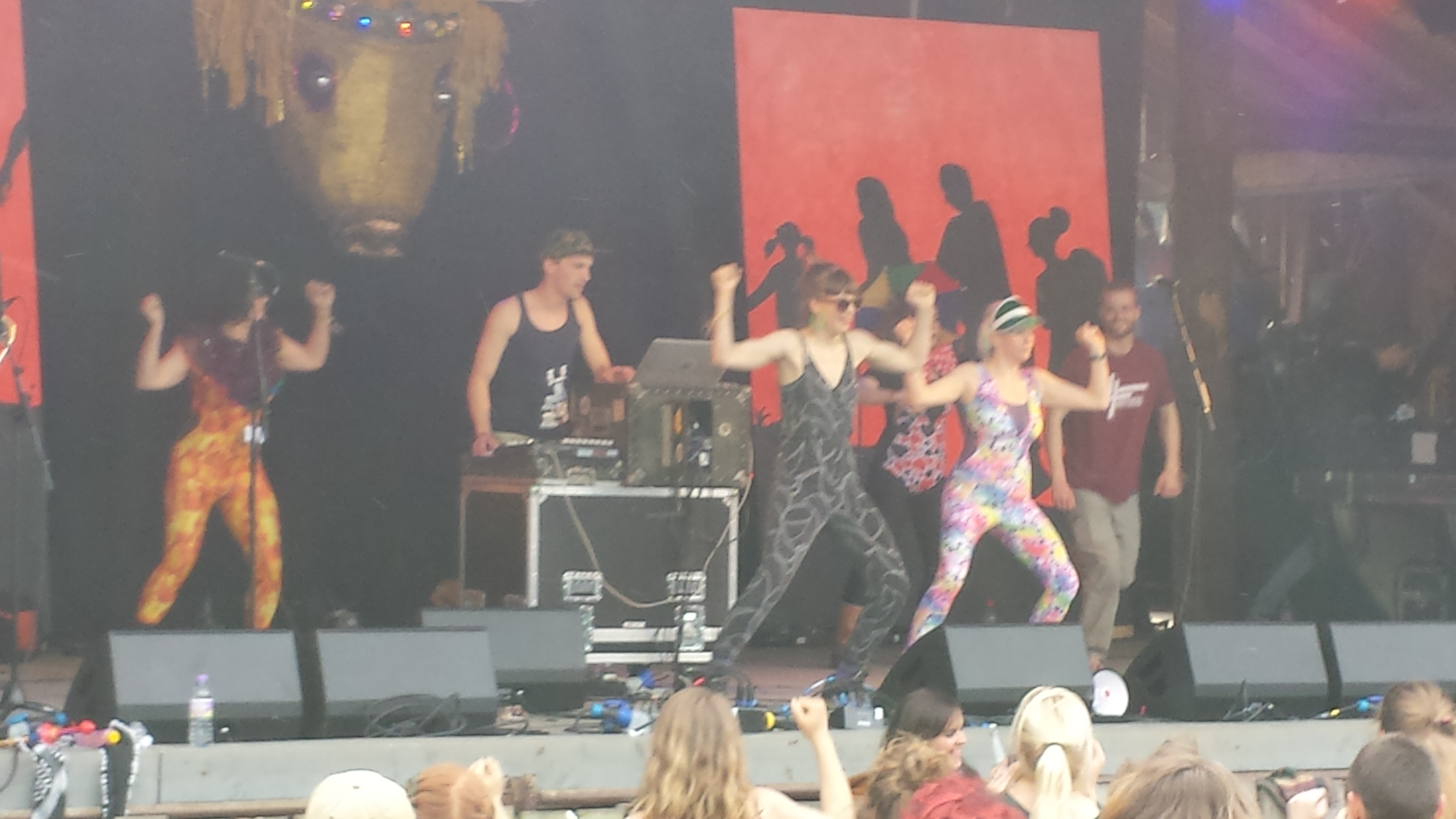 Anyway, they all wore skin tight suits, leading the audience through a series of synchronised dance moves along to the pump and pound of Samson Sounds. Blooming fantastic, the crowd loved it and so did we. 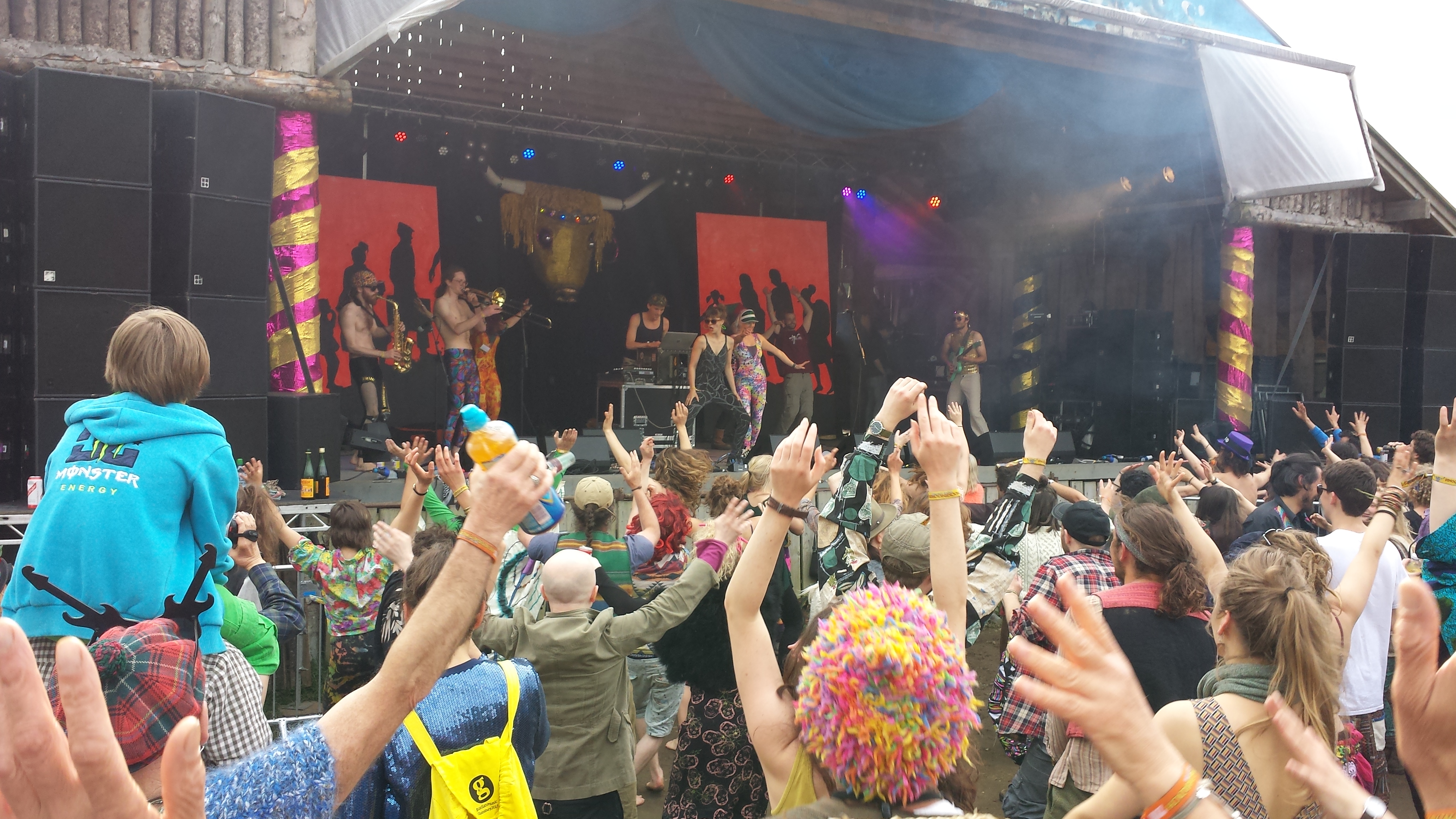 As the stage was prepared for the evening acts, we found ourselves distracted by Henna tattooing, Spindle weaving Punk Rockers and Hula hooping activities so we sat with friends and families outside the Sheiling tent and listened to the thumping dance music with a little Scottish influence on the side from Grousebeater Soundsystem and then swiftly followed by a little bit of DJ Bendrummerjamin who, although we were seated, had us all rythmic feeted, keeping us heated before we returned to the stage for Niteworks.

Well! They were absolutely brilliant! They skilfully brought the crowd up and down and danced us all around. They blasted us with Scottish instruments cleverly mixed in with dance electro beats. Resulting in a beautiful high fusion rocking performance.

As half the gang went off to find front row positions at Pyroceltica Extravaganza the rest of us found more friends and fellows around the camp fire and whiled away a few more hours listening to Habadekuk in the back ground and conversing over the well fed flames.

Then we caught the Freestylers familiar big bass sounds wafting over to us and ran into the rather full Sheiling Tent to enjoy a really random collection of tunes thrown together with style and panache. Such a good dance was had following the journey of their fantastic tunes and rhythmic hard beat groves. They had it all and we took it gleefully!

A final short stint in the headset disco to god knows what. It was all good!

And that was the spectacular end to day two of fun under the setting Knock sun.

Sun sunny Sunday was an immensely hot to trot day. The weather was positively Mediterranean for Scotland. We sat so happily around our camp site, the kids all playing either in the river or around the trees. The beers and bubbly flowing, the picnic snacks all scrumptious, the sun kissed skin all glowing and the conversation rambunctious. It was such good fun, with distant sounds of drums and guitars drifting up to us that we could not tear ourselves away. So it was a very slow lazy Sunday for us all. Just as it should be. It’s amazing how many dog related discussions you get into with other dog owners passing by and how many lovely friendly people frequent the tranquil gem that is Knockengorrach.

We went into the festival site during the late afternoon realising that we had missed the children’s procession. Which by all accounts from everyone else and their children, was absolutely great. Whoops. Sorry kids. Happy thought with their bottle tops in the dirt, they were none the wiser!

We caught most of a band called Turbans on the Bo-Airigh stage. A really interesting multi musician collective that gave us a beautiful eclectic European set. The programme said they would be exciting and that all we had to do was dance. So we did, and they were! 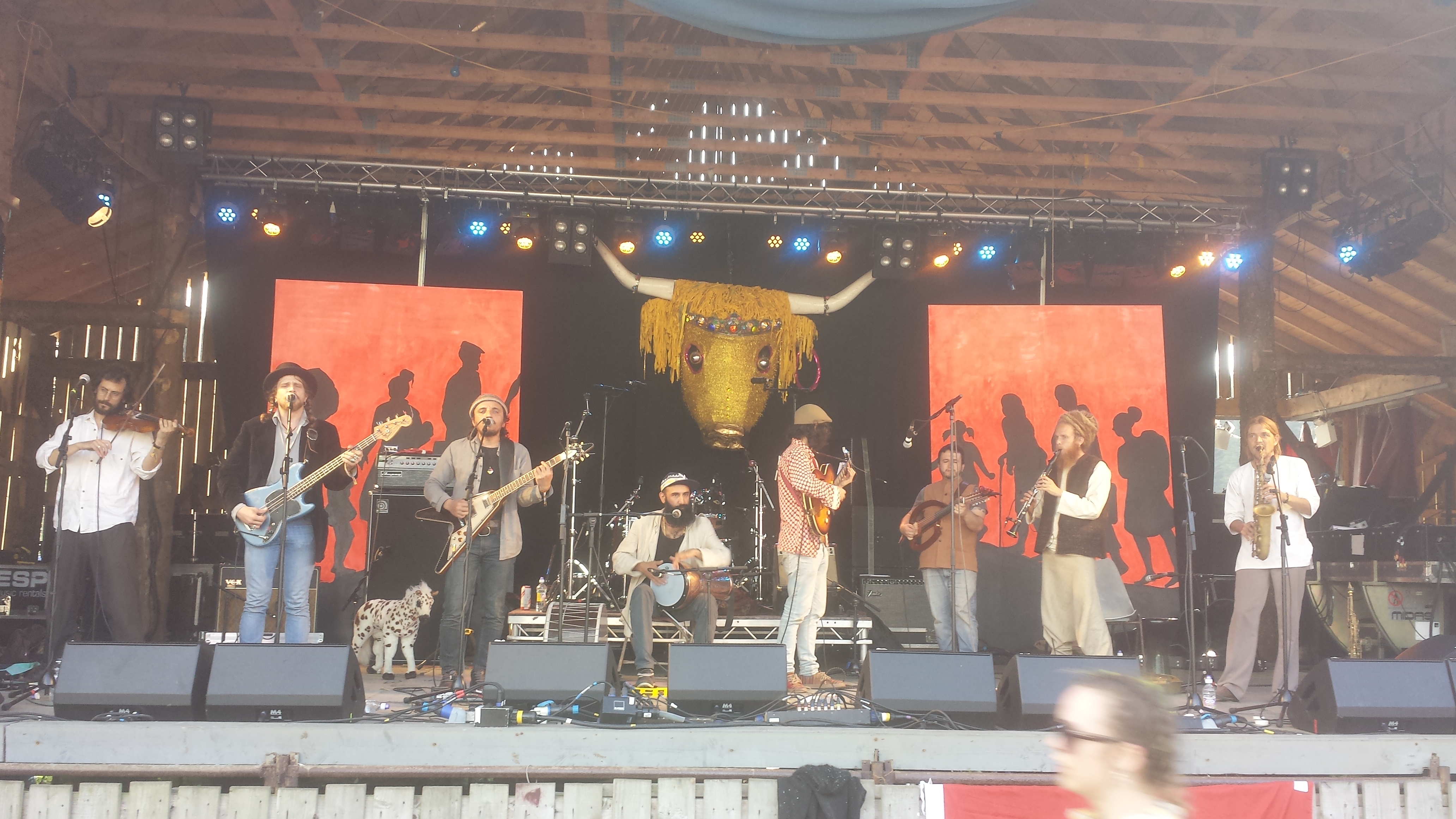 Family Atlantica came on and juiced us all up with their incredible worldy sounds, the beautiful voice of the Venezuelan vocalist and the rumba crazy funky style. They had us dancing even more in no time, yet again spinning some serious moves that complimented the music, or so we thought. Finale songs were accompanied by one of the band member doing some traditional Nigerian – Ghanaian dancing, which we certainly could not imitate. It was a high energy set, which the crowd enjoyed.

Last band of the day and closing act of the festival was a rather chilled set from Black Uhuru. All the way from Jamaica! A deep reggae base and original sound, we were soon all really quite chilled out and ready for a little more fire side action, cups of chai and bed time stories.

And so ended day three of chilled out fun, another year of the fabulous Knockengorrach all done.

Thank you Knockengorrach, you have been outstanding.

Review and Photographs by Lou Hyland 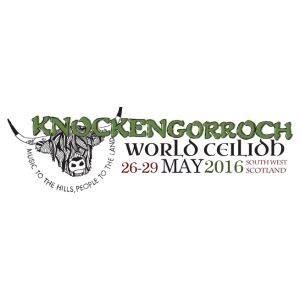