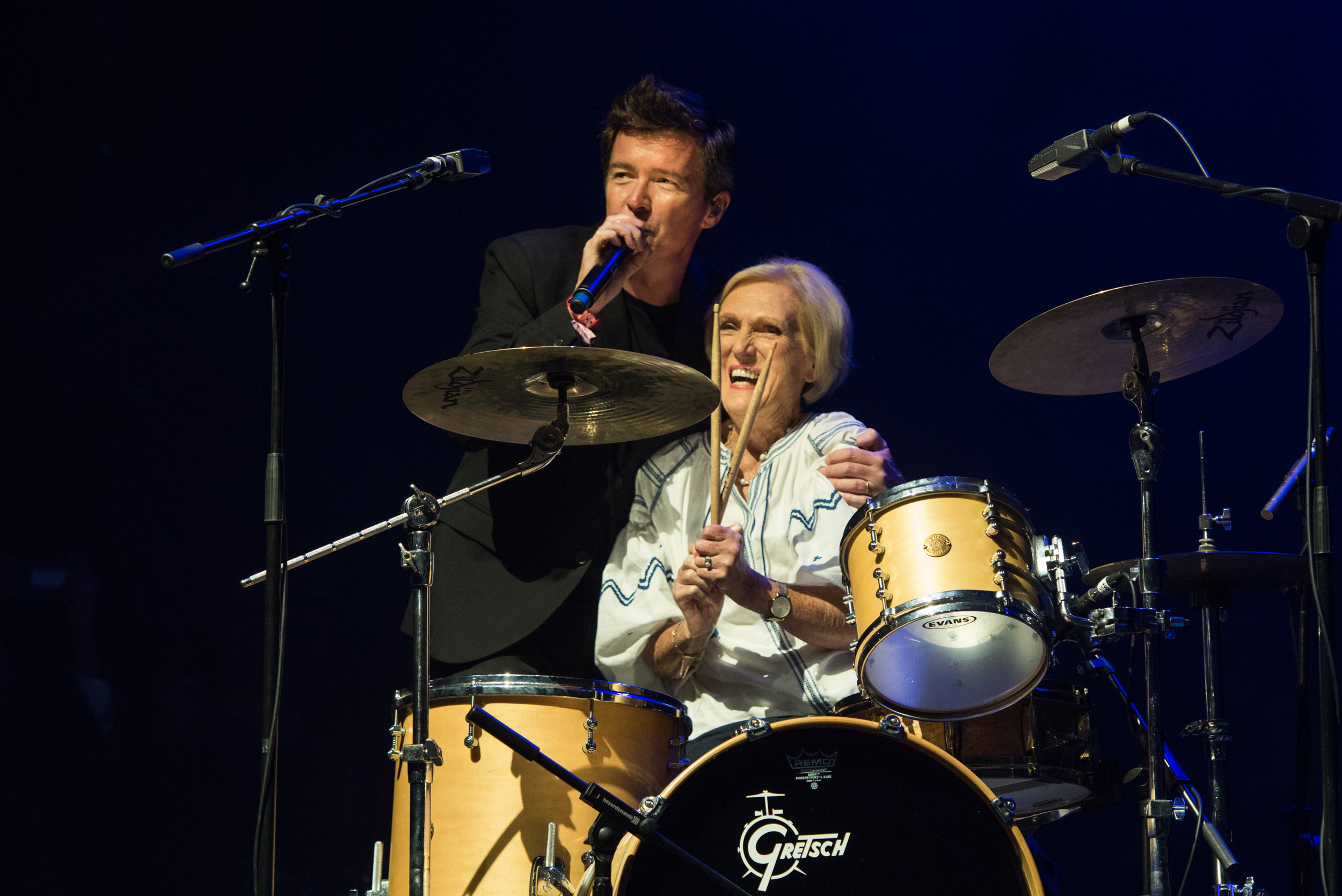 Camp Bestival 2018 made into the news twice this year, firstly for Mary Berry playing drums for Rick Astley and secondly for having to cancel the Sunday due to gale force winds and rain. Hopefully it will go onto be remembered for Mary Berry rather than being cancelled, as even though it was a day shorter than planned it was still a fantastic festival, supplying more entertainment in those two days than many others do in three days.

This years Camp Bestival line-up in my opinion was the best for many years, offering up something for everyone, with music covering the 60s (The Skatalites), the 70s (The Undertones), the 80s (Rick Astley and Simple Minds) and the 90s (Orbital, Shed Seven, Stereo Mcs and Jesus Jones) and with current acts including Clean Bandit, Dodi, Declan McKenna, The Lovely Eggs and Dub Pistols. And that’s not even mentioning the DJs in Bollywood, with Huey Morgan, David Rodigan and Altern-8. We kicked off our Camp Bestival 2018 with something new with Dodi on The Castle Stage. The singer, songwriter and YouTuber was playing her first festival headline set and if she was nervous it definitely didn’t show. She clearly has a huge following judging by the crowd of teenagers she attracted so early on in the day and they loved her, singing along to ‘Would You Be So kind?’ and ‘Sick of Losing Soulmates’. For just one person on a huge stage with just a Ukulele she really held her own. 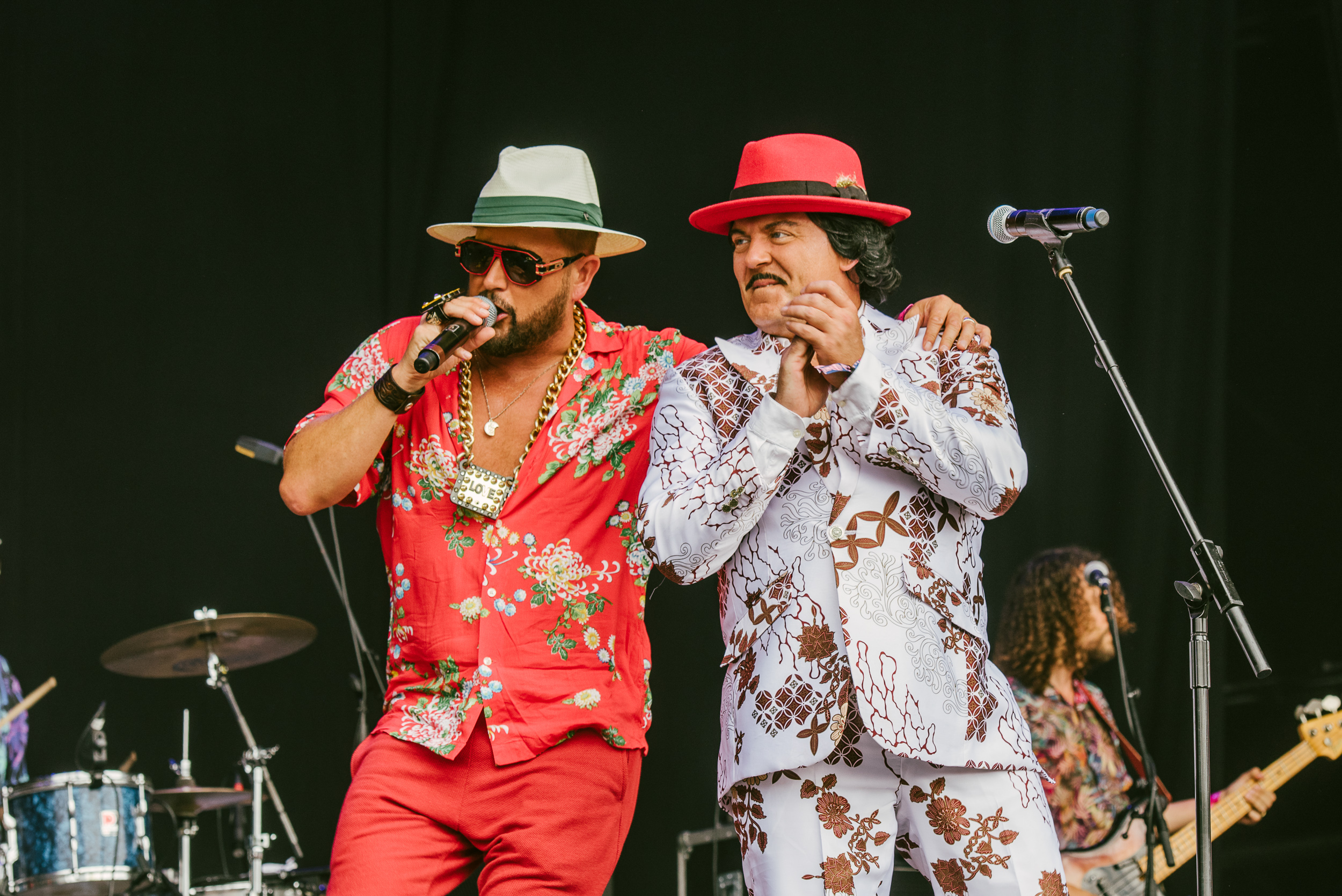 Camp Bestival regulars and my favourites The Cuban Brothers presents La Familia were next for us on The Castle Stage with a special set celebrating their 20th Anniversary accompanied by a live band. Their sets never fail to put a huge smile on my face but this year they blew me away. They were joined by two very special guests from two of my favourite bands, Mike Gee from Jungle Brothers and a member of The Average White Band. Hearing a live version of Pick Up The Pieces and Let’s Go Round Again will go down as my top festival moment of 2018.

One of my highlights of 2017 was dancing in the mud to Sara Cox presents Just Can’t Get Enough of the 80s playing at the disco ball. This year she was moved to The Castle Stage and played an equally as good set as the year before. She played 80 classic after 80s classic she had the crowd singing and dancing.

The dancing carried on over in Bollywood, where Huey Morgan was DJing his NYC Block Party. Huey dropped an amazingly eclectic set that spanned the decades and had the tent bouncing - including PC Jason Cox who has gone viral with his dancing,  we were lucky enough to be there cheering him along. Huey drew his hour’s set to a close with some jungletastic beats that had the crowd jumping, it was perfect preparation for the next act, Jaguar Skillz at The Big Top.

I'd not heard any of Jaguar Skillz’ mixing before, but I’m a huge fans of DJ Yoda and his appearances at Camp Bestival, and Jaquar Skillz showed he's up there with DJ Yoda in providing surprising and original mixes that got whoops and hollers of amazement and appreciation from the crowd everytime he dropped another track. Jaquar Skills worked the Big Top into a frenzy and by the end of his set, we had smiles slapped across our faces that lasted for hours and memories of a great time that will last for years. He's already on heavy rotation on my music playlists. 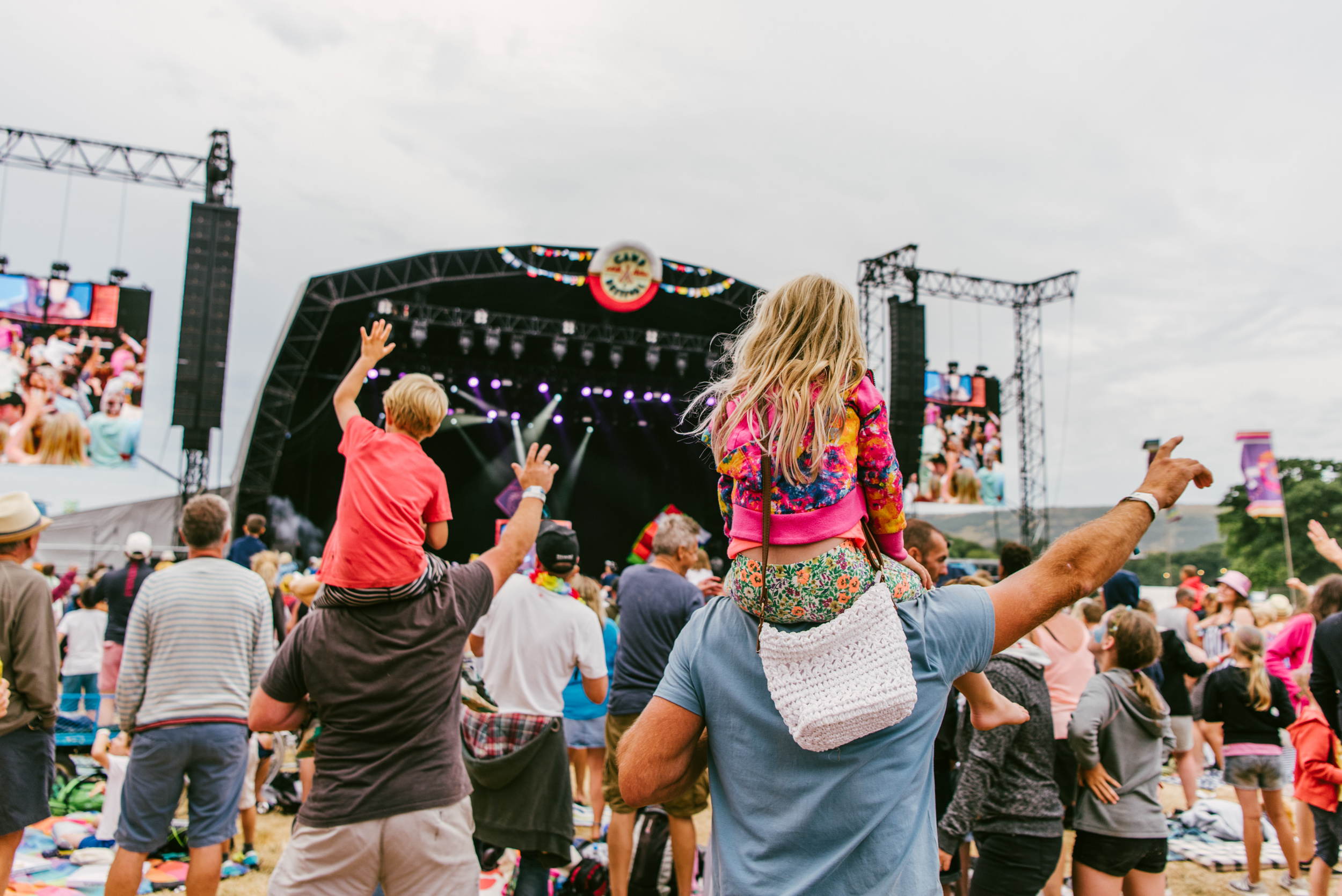 Back in the day I was a huge fan of Rick Astley so I was a little excited to see him headlining Camp Bestival. He was everything I expected and more. Obviously the more was having Mary Berry play drums in his song 'Beautiful Life', definitely not something I was expecting to see, but had the crowd going wild. He mixed his set up with old and new songs and as the intro to one of his older songs played he commented, “this isn’t the one you think, they all sound the same” In all he put on a fantastic performance and had everyone laughing, singing and dancing. 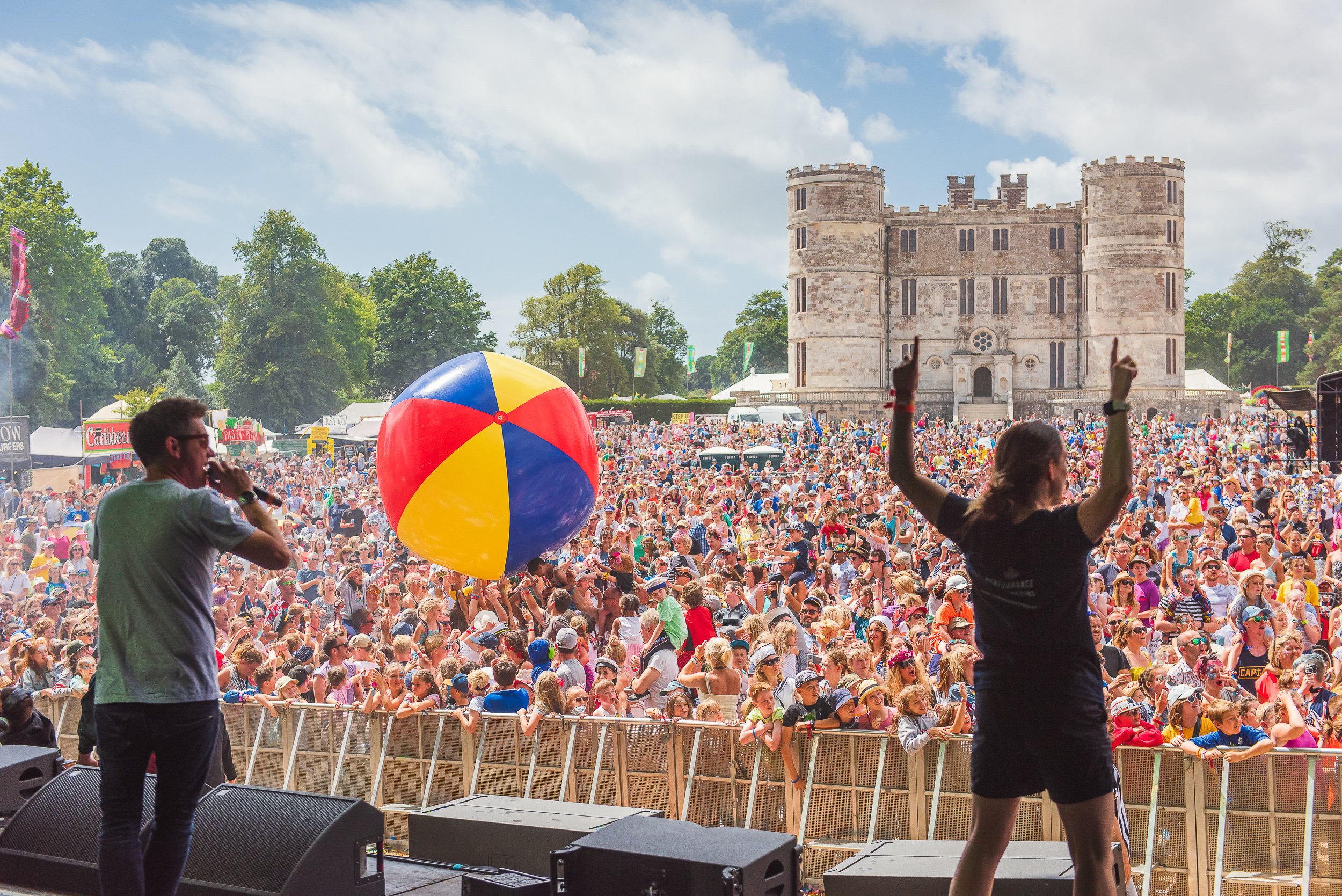 Saturday morning at Camp Bestival is all about the kids with The Castle Stage taken over by kids favourites Mr Tumble and Dick and Dom, who were also joined this year by Dinosaur Word Live. Leaving the fun to the younger members of Camp Bestival we explored what this years Camp Bestival had to offer. Pretty high on my list to check out was the food on offer. I have to say that I spend as much time going through the food line-up as I do the music! This year’s stand out food came from Biff’s Jack Shack and their amazing jackfruit burgers, Crumble Shack and Happy Maki. Next on the list to visit was the new gin bar, Rob and Josie’s Gin Festival. I love a good G&T and with over 50 different types of gins there was definitely lots of choose from. We managed to sample a few but not wanting to lose the entire day to gin we dragged ourselves away and back to The Castle Stage.

First band of Saturday were Stereo MCs. For me was a slight clash with Mr B the Gentleman Rhymer at The Big Top, but fortunately I managed to get the first few songs, they were on top form and I was lucky enough to catch Connected before running off.

Another Camp Bestival favourite is Mr B the Gentlemen Rhymer. Over the years I think he’s played every stage, including one year the Traveling Barn which was the real ale bar! This year we were treated to a fantastic set in The Big Top. The self-proclaimed king of Chap Hop took to the stage with nothing more than his banjo and iPad of backing music and to be honest he doesn’t need anything else. His unique take on famous songs had everyone singing and clapping along, 'Yo Diggity' becoming 'No Dignity' and MIA’s 'Paper Planes' became 'Paper Plates', a song about drinking tea. I could have happily watch him perform for another hour. Hopefully next year he’ll be on The Castle Stage so more people can fall in love with his unique humour and music.

It’s great to see Camp Bestival include new young talent in their line-up and one of the biggest names of the moment is Declan McKenna. He drew in a big crowd of both young and old and moved around the stage with a huge amount of confidence and energy, it was contagious. I have to admit that I didn’t know much of music but after such a fantastic performance I’ll make sure I give him more of a listen. 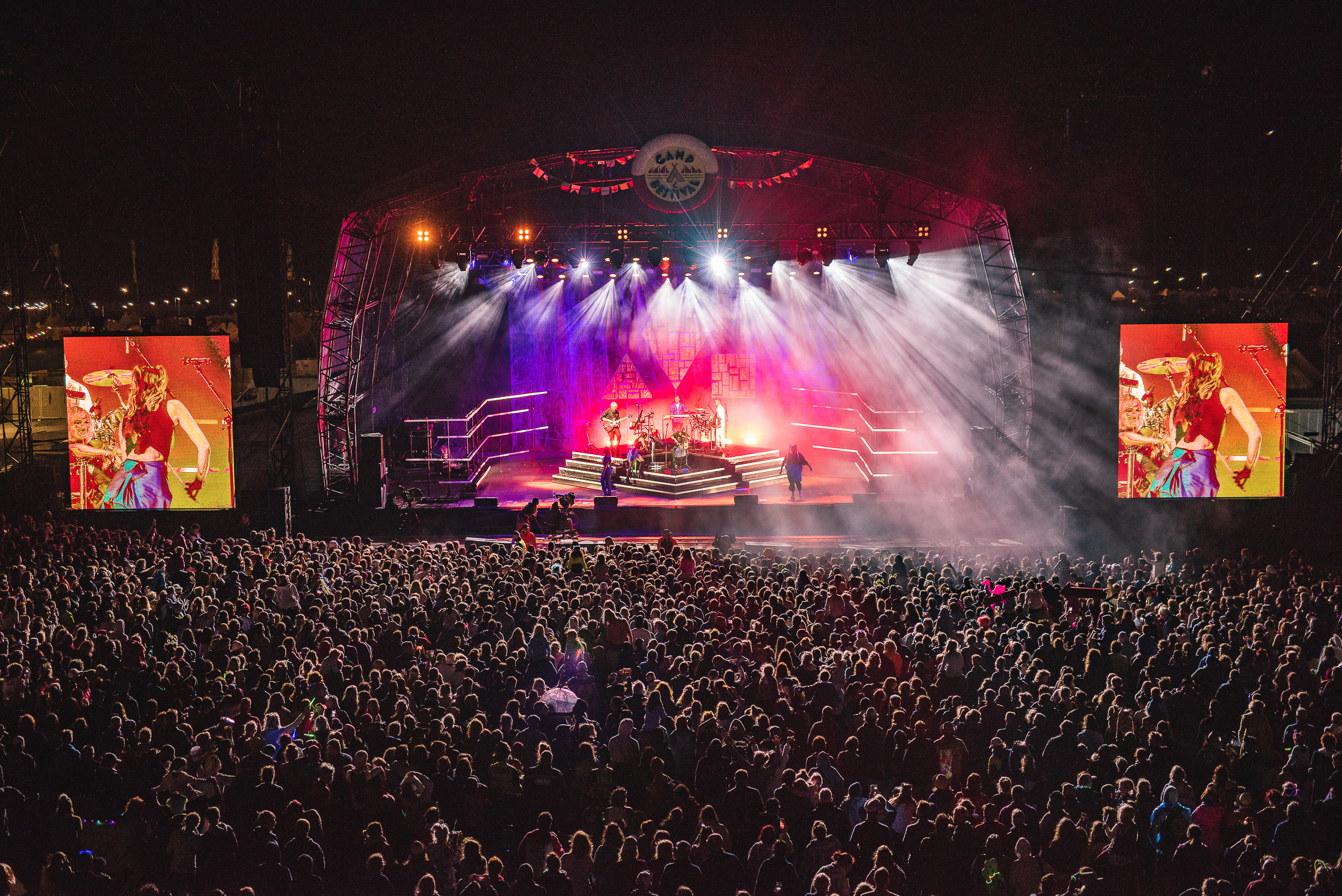 Returning headliners Clean Bandit closed Saturdays festivities to a packed crowd at The Castle Stage, by far the busiest of the weekend. Grace sparkled centre stage in a sequined green outfit, accompanied by violinist Stephanie and vocalists Kirsten and Yasmin. Performing all their chart hits they worked the crowd into a frenzy, but for me the standout song was the cover of 'Strikes You Sure Do', a fantastic club classic given the Clean Bandit treatment. Finishing off with 'Rather Be' was a fantastic end to a fantastic show

Sunday we awoke to severe wind and rain and signs around the campsite informing us that the arena would be closed until 12.30 when they would make a decision on if Sunday would go ahead. 12.30 came and on social media they said the decision would be made at 1.30. 1.30 came with the very sad news that the festival was being cancelled. We decided that taking the tent down in gale force winds wasn’t safe and as we were a big group we’d have a tent party. We were obviously disappointed that we weren’t going to see The Lovely Eggs, Shed Seven, Simple Minds and the Firework Finale but it’s completely understandable and probably equally as disappointing for the organisers. But it wasn’t all bad, we featured on BBC News online as the most read story of the day. A little bit of fame can really cheer you up! But in all we all had a great time at Camp Bestival 2018, saw lots of fantastic live music, ate amazing food and may have consumed a few too many G&Ts, but, hey that’s what festivals are all about.