'Beardy revelled in the New Normal - and revel it did' .... Beardy Folk Festival 2022 Review
Tweet

What a lovely festival. No wonder FFA Reviewers have been attending Beardy since its inception five years ago. Even with this Reviewers critical eye, there really is nothing to fault. It’s a wonderful weekend. After the last couple of years of hell, to walk freely in those fields amongst those wonderful Beardy folk again was absolute bliss. Remember that Beardy Folk Festival will always live in the annuls of British festivals as perhaps the only mainstream festival to successfully stage in both the bleak 2020 and 2021. A magnificent achievement in very trying times. (They probably still play a little fanfare every time Festival Organiser Beardy Dave enters a room!). This year, the gloves were off and Beardy revelled in the New Normal... and revel it did. 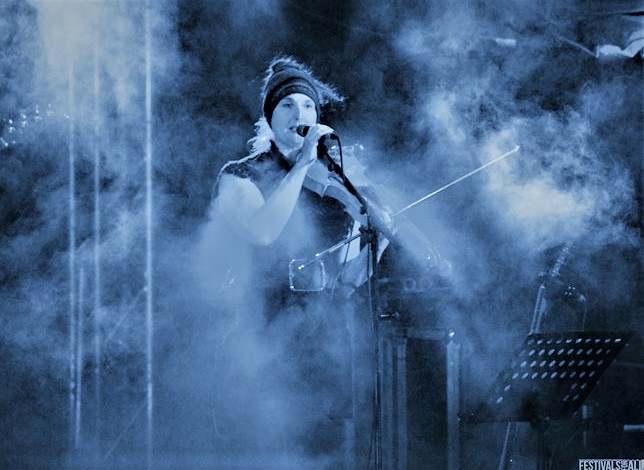 Set once again in the grounds of the glorious Hopton Court in Shropshire, with its wonderful Victorian walled garden hosting the second stage, the location and backdrop are idyllic. Organisation and facilities are always right on the button, two fine stages hosting over eleven hours of back-to-back music daily, plenty of workshops, sessions, yoga, spoken word, Morris, kids Circus skills, and, and… ok, enough, you get the picture. ‘Folk’ should be a broad church, and Beardy excels in the calibre, diversity, and quality of its music policy. You can expect Country, Roots, Reggae, Blues, World Music, and much else in the mix. Production values are high, with excellent sound and lights. What separates ‘Bands in a field’ events from a true ‘Festival’ are its people. Everyone involved, from the organisers and team, through to support staff, volunteers, artists, and most importantly, the wonderful Beardy audience, make this little bijou bash a very special weekend indeed. There is spirit here. No matter what the circumstances, no matter what the elements throw at them, these Beardy folk always come up smiling. 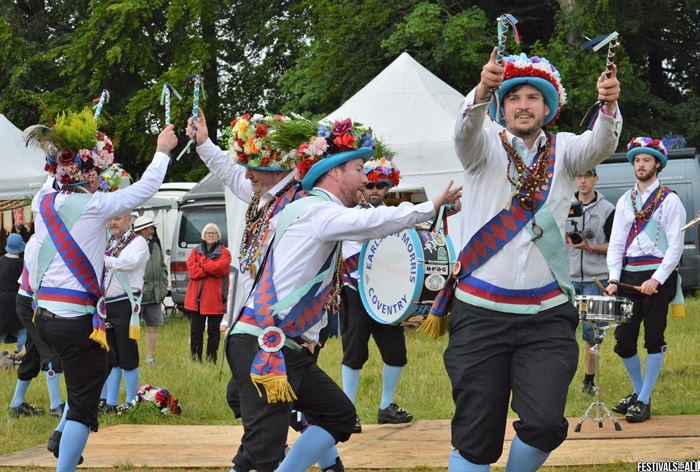 With more than enough eateries and stalls to satisfy, at perhaps a tad below typical 2022 festival prices, the Value For Money box was truly ticked. The atmospheric Bar Tent was knocking out fantastic Hobsons Beer and Cider at SIX pints for a twenty quid beer card – that’s £3.33 a pint in old money for the non-mathematicians out there. With Early Bird Tickets at a stunning £99, the message is clear - Get down to Beardy, Bargain Hunters. 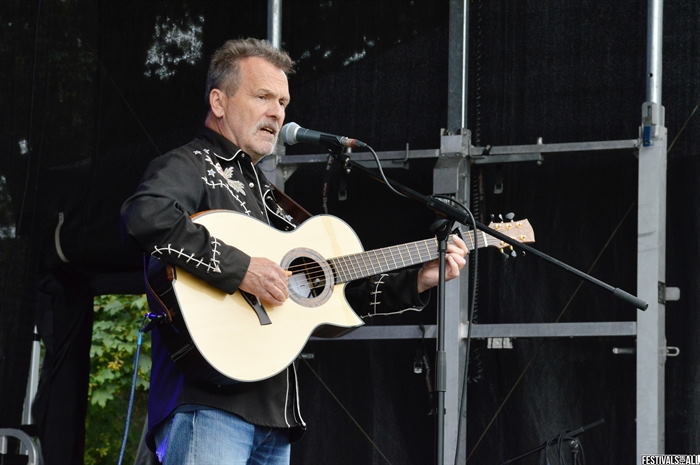 Now then. The difficult bit; The Performers. The calibre of acts is so universally and consistently high across Beardy year on year, that deciding whom to include in a review is always a challenge. The following is just what rocked FFA’s boat. Omission is not a Sin! Many great artists simply didn’t make our cut; If your faves don’t feature, then more fool us. With around 40 acts, plus the numerous performances and happenings around the site, this review can’t list everyone… or otherwise it would just be, well, a list.  So, here goes…

Blimey! Beardy is full of surprises; one of the first acts up for FFA, and arguably one of the sets of the entire weekend… Ladies and Gentlemen, I give you - Katie Spencer. In the blistering June heat, she conjured up some lovely lilting summer afternoon songs; personal, and sometimes ferociously so, but lyrics with a universal appeal nonetheless.  With a voice as pure as driven snow in perfect harmony with some frugal acoustic guitar work, the woman simply excelled. Just when this Reviewer thought he could not be more impressed, she only goes and sparks up an electric for her last song, fires up the echoplex and channelled John Martyn! What a start to Beardy 2022. 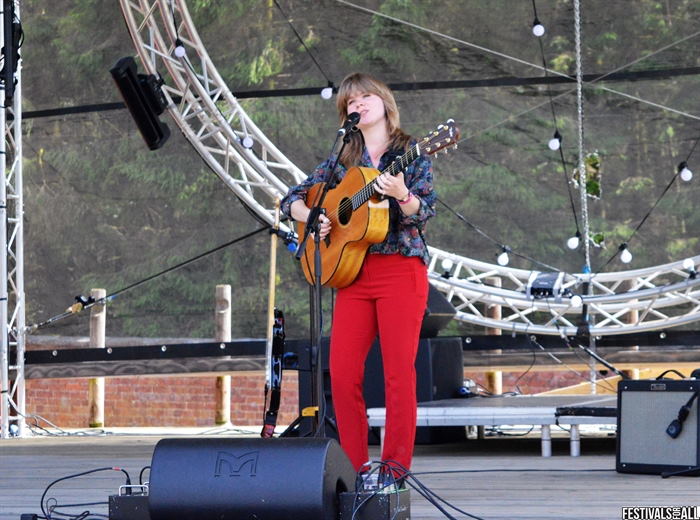 Will Pound & Jenn Butterworth were excellent; with some cracking harmonica, this was a journey through Reels, Jigs, and Shanties to delight the crowd. The take on Handel’s “The Arrival Of The Queen Of Sheba” was superb. Reg Meuross ably accompanied by Harbottle & Jonas produced a wonderful hour. This amalgam is a class act, and some fine banter complimented exquisite Appellation Dulcimer malarkey. They excelled with a wonderful “Lord Randall” A great set. 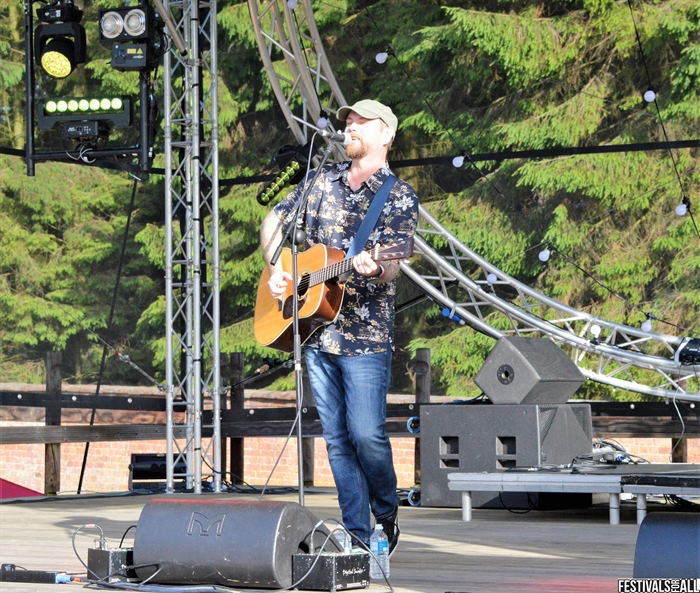 The always reliable cheeky chappie Gaz Brookfield delighted the crowd with his singer / songwriter talents. In a set perfectly balanced between jest and profundity, it was the genuinely funny “Can’t Drink Cider Anymore” that stole the show. Top stuff, as was a storming performance by Man The Lifeboats in their Garden Stage headline performance. A fine dynamic outfit, full of splendid musicianship and song writing, with lyrics charged with cutting political commentary, (like the excellent ‘Doomed’), this was a set nicely seeded with both light and dark moments which triggered a great crowd reaction. Friday was turning into a very good day indeed. 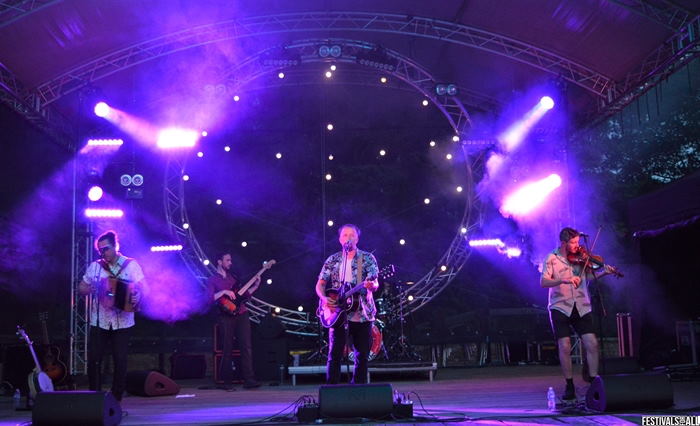 Edward II closed shenanigans with a wonderful headline show over on the Meadows. These guys are old troupers and just know in their bones how to please a crowd.  They had all the moves, all the chat, all the songs. The classics were all out on parade too. ‘Night Nurse’ took the absolute biscuit in a set list packed with the mellow Reggae vibes that make this band so special.  The crowd were dancing and singing, the evening hot, the beer flowing, Beardy had only gone and done it again.  A great day. 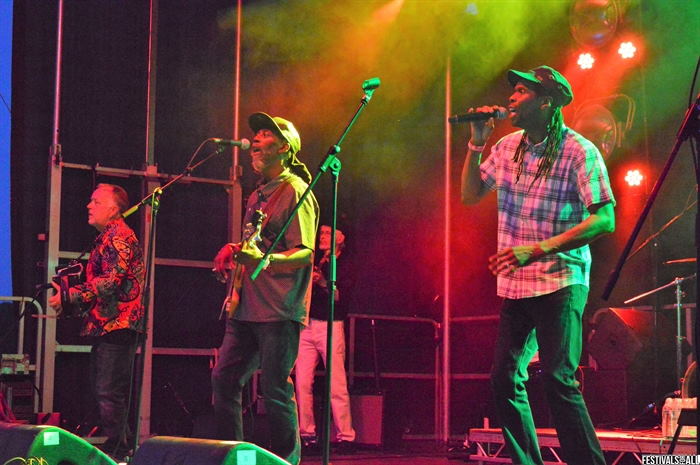 The weather was interesting. Dry and hot its wasn’t. Given the 15-degree temperature dip and heavy rain, would this crowd cope? The Beardy folk simply shrugged, gobbled it all up and got on with having a ball; as did The People Versus. This reviewer loves a band impossible to categorise – Gothic Pop anyone?  I’ve no idea, but I do know it was all rather splendid. Singer Edwards affected style takes over where the hugely underrated Doll & The Kicks left off. Throw in some wonderful cello for a leftfield baroque vibe, and the band simply fizzed along. Hugely entertaining and truly fascinating. Damned Good – go check ‘em out. 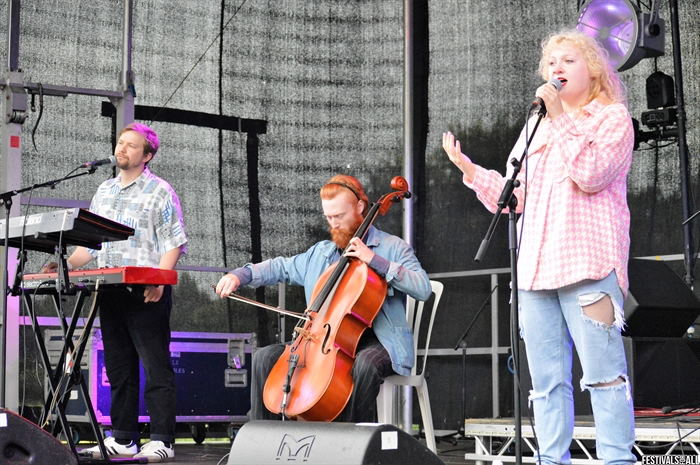 The Ugandan folk and roots of Seby Ntege provided an excellent counter; the Kora is one of the most beautiful instruments on the planet, and this reviewer can now add the East African Adungu harp to the list. Ntege was the master of both; throw in the very Western beats of his excellent band, and this mash up fusion was first class. Happy Afro-beats, merging with traditional Ugandan songs and tunes to brighten a dull day. 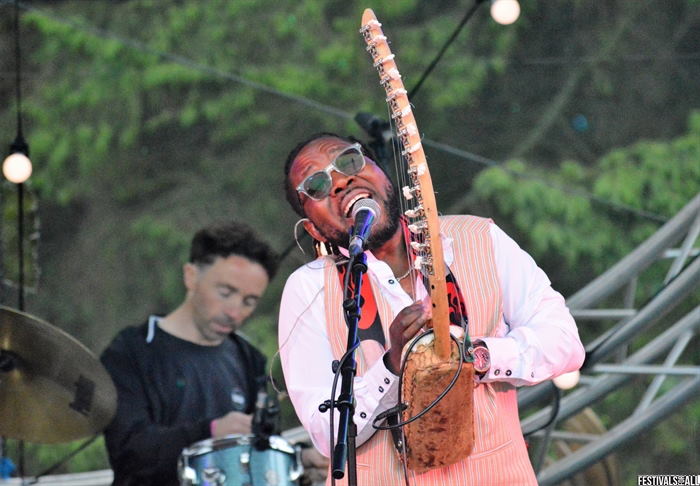 Bonfire Radicals !!!  What a show from those girls and boys – stunning stuff and what a way to close the Garden Stage. They were superb. Grinning from ear to ear whilst generating a maelstrom of Greek & Eastern European influences overlaying a traditional British folk vibe. Great musicianship across the board with everything from Slavonic Dance to, I swear, shades of the Peatbog Faeries when they really let rip and got into the groove. Wonderful. 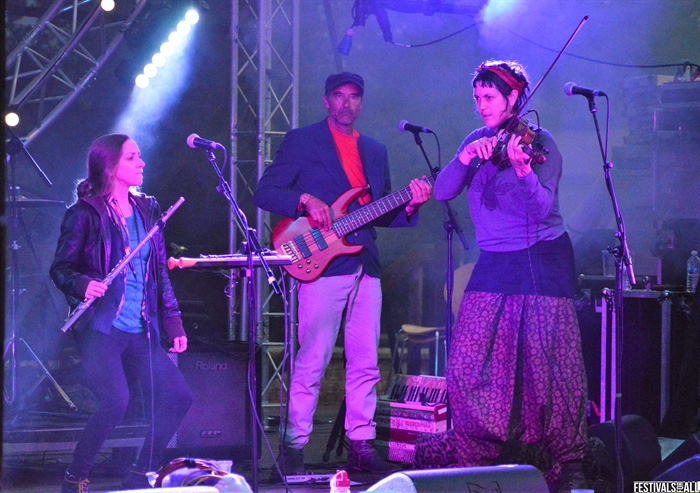 Now then, Gary Stewart’s Graceland. This is no covers band. These are very accomplished musicians paying homage to one of the planet’s classic albums and one of the most influential singer /song-writers of his generation. They infuse the songs with their own personality and spin, whilst still honouring the core of Simon’s original masterpiece… and what a great job they make of it all. The crowd loved it, the gaff was rocking, the weather forgotten, and all was well with the world. 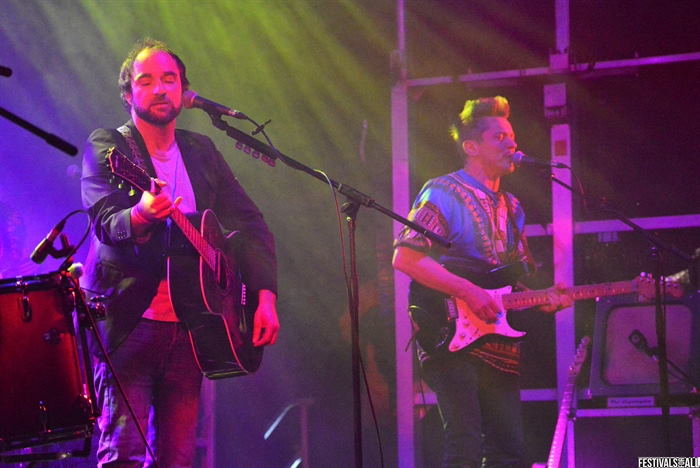 There aren’t many occasions when you can share a Session with many of the stage performers who have entertained you throughout the weekend, but Beardy is the exception. The Bar Tent was throbbing into the early hours as performers and punters alike all rocked up to play the night away. An excellent beery ride to end another special Beardy day.

Oh Lordy! Dan Whitehouse – perhaps the find of the festival. Just the man and his very able percussionist. This was an intense, deeply personal performance. Each song a mournful lament to love and loss, and all the imposters dividing the two. Alternating between guitar frenzy and stripped back soundscapes, the fragility and vulnerability of the human spirit was laid bare in lyrics that cut to the bone. An awesome roller-coaster of a ride, and absolutely wonderful. 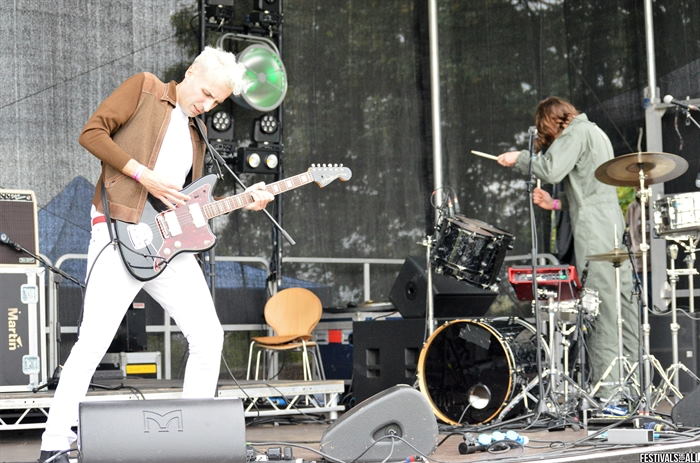 Scousers! I’m a Manc – it shouldn’t work – but it did. Wet The Tea everyone. Great chat, songs and tales about roots, family, and a sense of place. Our past helping define who we are. Loved it. Martin Simpson, another old stager knowing exactly how to play a crowd, and he was excellent, generating splendid country blues with a political edge – a latter day Woody Guthrie. ‘Nuff said.

Away from the stages, Beardy offers a comprehensive programme of events in the Woods and also in the wonderfully atmospheric Victorian Orangery. So Behold – Rob Barratt, who we caught up with in the Orangery. ‘Comic Poet’ it says on the card. That’s not the half of it. The man is a velvet tongued assassin, using charm and humour as a subtle lever to highlight life’s absurdities, but also expose more fundamental fault lines in the structure of society. It’s all very light and sing-along jocular – but this man is dangerously subversive and his show should be witnessed at all costs at your earliest opportunity. Bloody Funny. 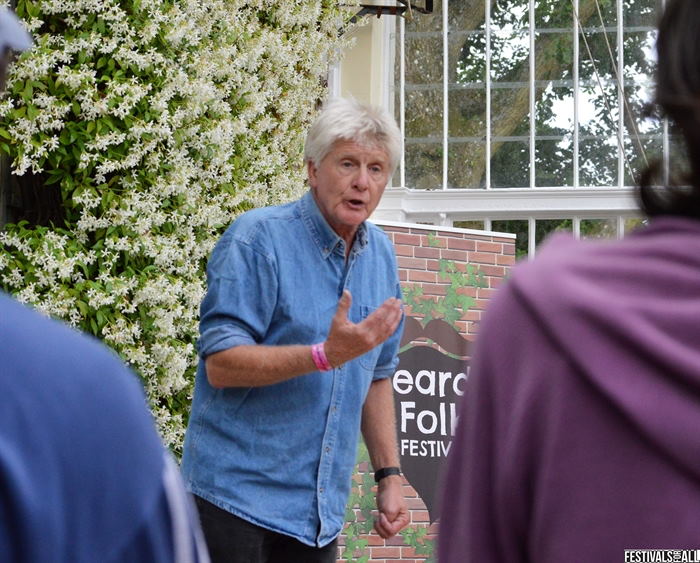 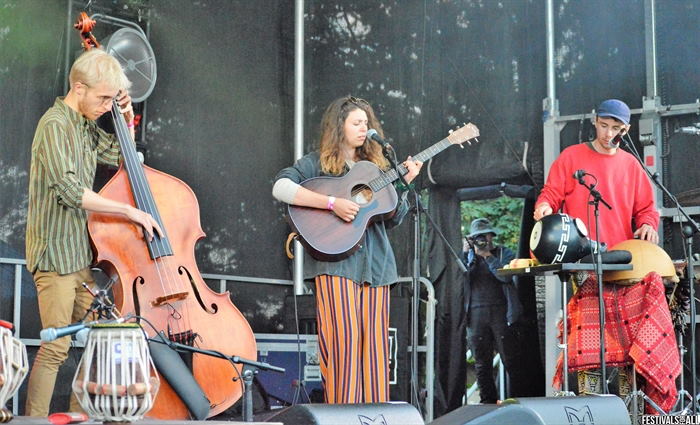 Beardy make some inspired choices, and the decision to close the festival on the more intimate, atmospheric Garden Stage was a winner from the off. You want a Headline Supergroup at Beardy – look no further than the Martin Simpson, Tom A. Wright, Nancy Kerr, Findlay Napier, Alex Hunter collective, A.K.A. The Magpie Arc.  As a vehicle for individual excellence, they were superb, but as a collective they truly excelled. Kerr’s interplay in particular was outstanding. What a privilege to witness such talent entertain. We were blessed. Beardy is one of those festivals full of little moments that live long in the memory; cue The Magpie Arc encore – a true ‘Beardy Moment’. The band sparked up “After The Last Bell Rings”, and this crowd, this fabulous rain soaked, sun-baked, windswept, cold, tired Beardy crowd, stood arms raised and swaying in one last defiant hurrah, silhouetted against the stage lights, singing their hearts out. 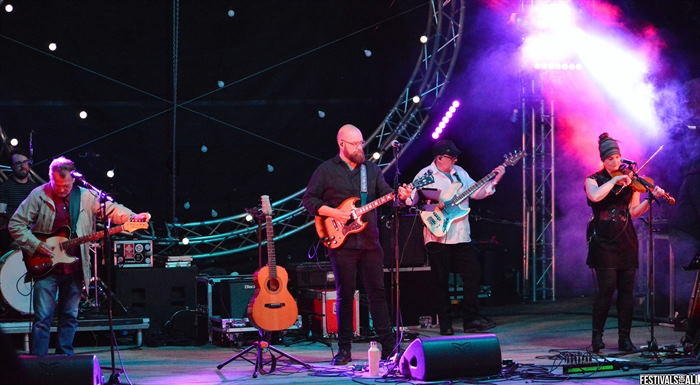 So, there you have it. Beardy Folk Festival 2022 – an absolute delight. 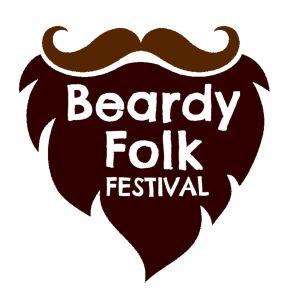