Let’s have this out up-front: I love Solfest. This is a truly splendid festival. Understandably the highlight of the festival season for many, it’s easy to appreciate why this weekend bash in the Cumbrian hills is so very special. Not only has the event provided the opportunity to witness some diverse first class acts over the years (2013 featured the likes of Afro Celts, Alabama 3, Maximo Park, and Flogging Molly), but, as with all great festivals, the music is just one small component of a much bigger whole. Solfest has ‘The Vibe’ you see. You know – that magical buzz that you feel as you approach the arena. Everyone, both crowd and artist, feeds off it. It permeates everything throughout the weekend. Given the amount of live events around – it’s still a component in short supply. Other events would kill for just a slice of Solfest’s atmosphere.

2013 is Solfest’s TENTH anniversary, and an old cliché, but it really is a festival of the old school, shunning that corporate feel, and operating on a not-for-profit-basis. Run by a committee of volunteers, these are people who consistently feel the pulse of the crowd, and instinctively know what they want… because they want it too. This is a festival for festival people by festival people. There is a passion here; a festival ethos that in these cynical times blows through the festival scene like a blast of fresh air. The crowd thrive on it. There are all types of punter at Solfest, young and old, coming from very different backgrounds and musical tastes – but all want to share in a common experience. It’s that vibe thing. This festival genuinely attracts some wonderful wonderful friendly people.

Compared to other events of this size (circa 10k capacity), it’s a combination of all the little differences which helps set Solfest apart. Just as a fer’ instance – you can happily park right next to your tent, they have a BYO alcohol policy in the arena (and still the bars were heaving and running dry on Sunday!); Oh, and this is The North so there were some great ales at £3 a pint. You want a campfire round the tents? They encourage it - they supply old hub caps and wood for the very purpose. You really bugged by a Monday noon latest departure time to clear the camping fields? Well Solfest let you recover from the previous night’s excesses with a dusk deadline. A particular bugbear for this reviewer is the jaded Sunday evening feeling to a festival where everything is winding down and they want you in bed and the site cleared by midnight. Even some flagship festivals many times the size, and who should really know better, kill the event around you on Sunday evening. Solfest is the antithesis to all this. Rarely for an event of this size, Solfest is a genuine 24 hour event. Indeed you can wander into the arena to start festivities at 2am any night (many do), and still see a live band, eat great food, enjoy all the stalls and amenities, and quite literally dance the night away. The famous / infamous Dog’s In Space, which incidentally continues to set the benchmark for ‘chill-out’ tents up and down the land, opens Friday afternoon and simply does not close until 8:30am Monday morning. Small things in isolation but collectively it makes a big difference to an event in this size bracket … you know these people care! They really do Want To Do It Right.

The site is large and thoughtfully arranged, with six stage venues plus other stuff kicking off in the various backwaters around the arena. There are loads of chill out zones to be hazy / lazy and watch the world go by. Imaginative site art is everywhere, and by night, light shows play amongst the shadows to create a marvellously chilled environment. Don’t get me wrong – Solfest caters for every mood, as you’d expect. Solfest does 'Manic'. Oh does it do Manic; The famous Solfest Dance Tent is spoken about in reverence by those in the know. A wonderful high energy scene goes down in there. Add to that top reggae and soul-funk tents and there really is something for everyone. Families are sorted too with a dedicated area for kids activities.

Not only did 2013 witness some beautiful weather (unlike most other events across the country), but also some beautiful music. Solfest organisers are masters at amassing top quality artists… and this is throughout the entire bill – no fillers here. This is the classic festival tale of walking past a stage en-route elsewhere and ending up watching some unknown band’s full set. Organisers are also masters at programming policy with some inspired and imaginative back-to-back scheduling (Alabama 3 / Afro Celts or New Model Army / Flogging Molly as an example). A really big-up for the stage crews by the way; as with many things about Solfest, the sheer quality of the sound on the stages and in the tents was absolutely excellent.

In a weekend full of musical highlights here is snapshot of what we managed to recall….

Friday was kick-started by a splendid set from Oysterband. This was a politically charged folk-rock set of the finest order whilst Maximo Park had a bouncing crowd eating from the palm of their hands. Sometimes the crowds singing almost drowned out the bands’.

We caught a typically excellent set from Solfest mainstays Utah Saints in an unbelievably kicking Dance Tent (it’s a huge affair with great visuals, more smoke than an, er, a smokery, and an absolutely killer deep deep bass system) before retiring to chill in Dog’s In Space. A brilliantly mellow hazy- phazy 2am set from the excellent Polaroid 85 capped a splendid evening.

Earlier we caught arguably one the sets of the festival from Roughneck Riot over on the Bar Stage. They were absolutely fabulous and a previously unknown quantity. They blew us away. This was frantic, folk-punk (your label here) of the finest order. A hellfire of a set making the hairs on your neck stand on end. Don’t get me wrong – alongside the mayhem these guys are thoughtful and accomplished musicians. Not only do they sound brilliant but they also look the part. This band has all the necessary ingredients to fly. Catch them now, at the beginning of their journey. Splendid stuff.

Saturday, again what a day for great music; the wonderful ahab regaled the main stage with their musically exquisite tales of love and loss before Alabama 3 absolutely ripped it up. These guys always give a full-on performance and were perhaps the best I’ve seen them in many a year. Can you be sleazy and polished in equal measure? This band manage to nail it with Aurora Dawn in particularly fine form as she downed her trademark Cava from the bottle. A marvellous set with Hypo Full Of Love getting the best crowd reaction of the entire day. Acid Country Rock they say - Lovely.

The Drystone Stage is famous for both its programming and quality and so it again proved, with a fine set from Home Service. The band play songs and tell stories of a world that was; a past slowly and sadly slipping away from collective memory. Their homage to the loss and waste of World War 1 was particularly moving. Another change of pace saw us trying to squeeze into the Bar Stage for The Undertones. It was an absolute packer and we danced outside with the overflow crowd! Talking of dancing, we caught Solfest stalwarts Pikey Peatz back at the Drystone. Blimey – this is a great band. High energy ska amongst much else. Their enjoyment is infectious. They defy you not to dance. An excellent festival band to grace any event.

Afro Celt Sound System produced one of the sets of the weekend. In a rare outing this is world music artists right at the top of their game. This was afro percussion driven beats of the highest order. I can’t recall a Saturday night headline crowd being transfixed by the beautifully haunting sounds of the Kora before. A stunning set marred only by some temporary sound problems with a power outage to keyboards which were quickly corrected. The band played on. Onwards In Time was simply beautiful. Great crowd reaction. A Whirly Gig indeed.

The Slamboree Sound System were absolutely superb over in the packed Dance Tent. They generated an electric atmosphere and we do believe we heard a Queen sample somewhere in the mix. Terrific beat merchants. We had to retire to Dog’s In Space for a comfy settee!

Sunday we were seduced by the lovely quintessentially English folk of Yis Aye over on the Drystone. The band had drafted in a temporary bassist and drummer to enrich their sound for a festival field audience (‘It’s my son on drums and he hates this folk shit I play!’ was perhaps stage banter of the weekend for us as said youth squirmed in embarrassment). This was a wonderful festival Sunday afternoon vibe.

Blimey – we’ve seen New Model Army a number of times this year and they just get better and better. Again a band not afraid to wear their politics on their sleeve, Sullivan worked the crowd like a trouper, with No Rest once again finding a festival crowd in full voice. A great festie band.

To my shame I’m not too familiar with Flogging Molly, so no bias when I say that on the basis of crowd reaction alone this was probably the set of the weekend. They were superb and had the whole field dancing. It was a brilliant atmosphere. Dave King led the line in majestic fashion. The guys were grinning from ear to ear and genuinely appeared to be having a great time. Their heartfelt thanks to the crowd and organisers was truly endearing, and in a nice touch they hauled stage crew into the spotlight for personal thanks. Class act.

We caught fine sets from Gingersnap And The Style Pile followed by bouncy ska from Room Full Of Mirrors before retiring to Dog’s In Space for an early morning live set from Eat Static (their third appearance of the weekend). We watched a wonderfully crap back projected 1970’s Japanese Scifi film whilst chilling to Eat Static’s hazy spacey trance beats to end the day in some style. Now that’s how to spend a festival Sunday!

Solfest have spent ten hard years perfecting all this – I thank them. Don’t miss the eleventh year – we won’t. 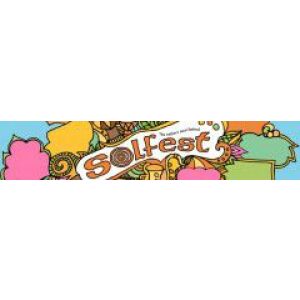