Blimey. Shiiine 2018 was excellent, and so much more than a collection of fine bands at a fine venue. In one short weekend this collaboration between the good people at Butlins and the North Country Boys crew successfully captures not just the music, but the whole ethos and culture of a period in time that changed the world and defined a generation. The artists were just a backdrop, the SCENE is the thing at Shiiine; to be part of this collection of beautiful people is to be part of a wonderful shared experience. For this generation Shiiine provides a focal point, to pay homage to the vibe that defines their very soul. It was their time, it made them who they are today - and Shiiine was a celebration of it all.

Our FFA Reviewers were in raptures about Shiiine 2017 (Check out the FFA Shiine On Weekender 2017 Review) and 2018 simply cemented that reputation. The Butlins experience underpins it all of course. Their holiday resorts are spot-on and very much 21st century locations, with excellent facilities, accommodation, bars and eateries to suit most tastes, plus everything from pool halls, water parks and bowling alleys, to yes, crazy golf! There is simply nothing to fault. FFA can’t champion these dedicated music weekends enough. A winter music fix without the mud, and your own facilities to boot. Gig, Cabaret, Concert, and Festival morph into one excellent whole, with a warm bed to retire to when it all gets too much. Forget the nonsense that you may have heard about Silly String and Redcoats, Shiiine is a genuine music festival, Butlins is ace, and this year’s event was a classic. 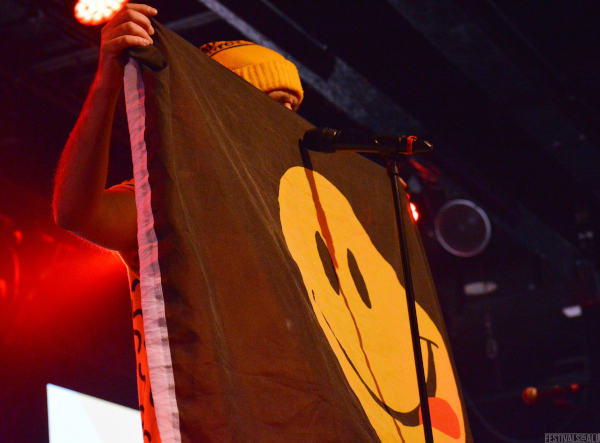 Around four thousand shiny happy people rock up to Shiiine and they revel in the modern facilities and the half dozen music auditoria, and well over 100 acts through to 3am.  Minehead town is lovely and only a few minutes’ walk away, and the Butlins Minehead Resort is simply bursting with experiences aplenty. Shiiine is defined by its audience of course – they ARE Shiiine. A fabulous crowd up for a good time, passionate about their music, and with a real sense of community reminiscent of the early underground scene. For many in this bright-eyed bushy-tailed crew Shiiine holds up a mirror to their youth, their defining time, and firmly states ‘Sorted’.

Now then. All Reviews are just opinion – I’m just this guy yer know. If you were blessed to walk Shiiines hallowed halls, you don’t really need me; you’ll have your own favourites and special little Shiiine moments – this happens to be FFA’s. At Shiiine the EVENT and the people are the thing that has permanence - the artists are transitory building blocks each year in a greater whole. Each playing their part in the ongoing and wonderful Shiiine story. The School of 2018 did not disappoint. We saw loads, we missed even more. Omission is not a criticism! If your favourites don’t get a mention then more fool us – we were probably up to mischief elsewhere. 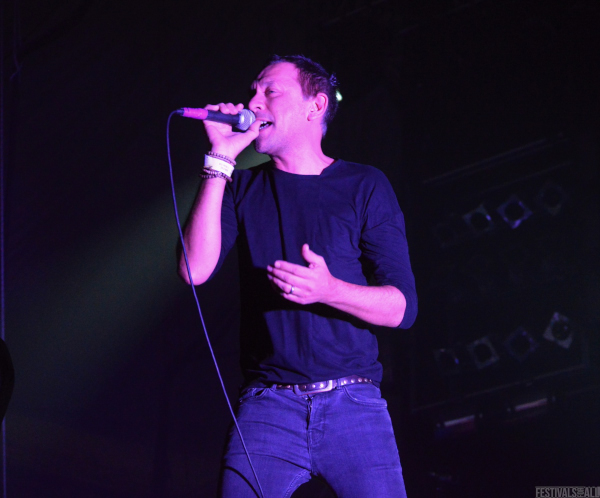 Shed Seven were first band up for FFA, and arguably set of the festival... and what an audience! A great Friday night singalong crowd who knew the words to every song. A fabulous Shiiine atmosphere. Not a band to rest on their laurels, their set was heavy with new material from ‘Instant Pleasure’, and damned fine too. Joined by Chris Helme for the classic ‘High Hopes’, the set simply fizzed along. The Skyline Stage was absolutely buzzing. By the time ‘Chasing Rainbows’ closed the show, Shed 7 had nailed one of the best Butlins sets for many a year. Later, The Darling Buds delivered some delightful indie pop with Andrea Lewis in fine form and brandishing a mean tambourine. 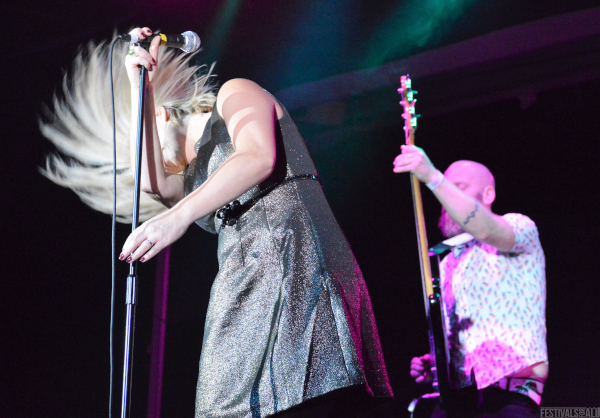 The reformed and much revered Bradford were an entertaining bunch knocking out a fine set, particularly drummer Max Newsome playing some blistering percussion. Festival anarcho-punk stalwarts Back To The Planet rocked out Reds before the excellent Bentley Rhythm Ace let rip. Deadly serious beats with a larger than life delivery, BRA play with more than a knowing nod to life’s tongue-in-cheek priorities - one of the decks was behind an illuminated veteran car complete with working windscreen wipers for goodness sake! An absolutely cracking set. 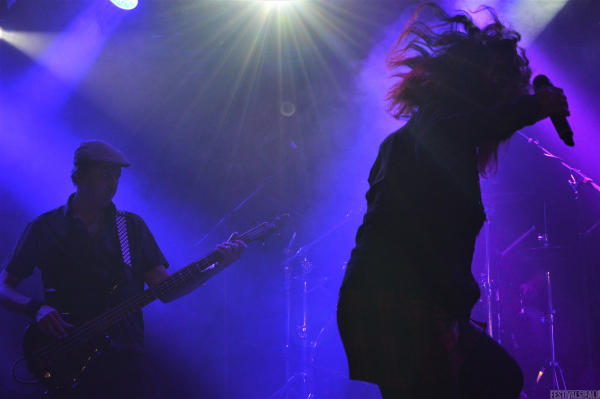 A packed day of Good Times. FFA savoured the nectar all around the patch, but a handful of exceptional acts simply blew us away, and each, in their own way, illustrated what Shiiine, its people and its vibe, is all about. Black Grape – what can we say? Given Ryder’s last showing at Shiiine, FFA can report that no only does the man now appear in robust good health, but positively on the button. The interplay with the storming Kermit simply rolled back the years. Yeah, the shortish set was largely an extended PA gig for the current ‘Voodoo Pop’ album – but so what? The frequent album plugs became a running gag, the band were excellent, Ryder and Kermit were on fire, the new material is top on, the crowd loved it, and a great outfit are back. The survivors had taken back the asylum. Respect. 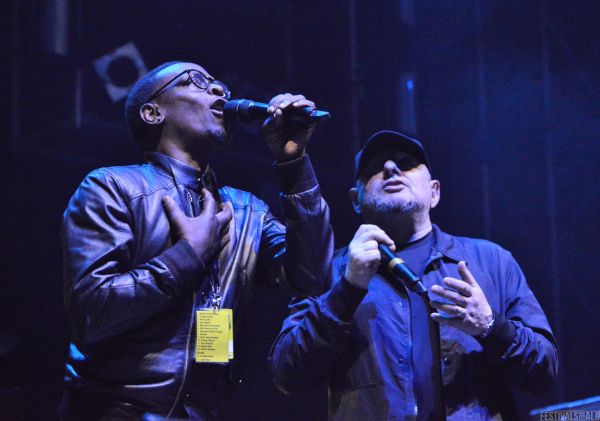 Ocean Colour Scene; a brilliant headline set in the Skyline. Polished indie pop from the masters. Proof positive that class does not fade; forget the genre definitions, forget the decades, great songs have a quality, a permanence that pervades and persists. Some OCS tunes make the skin tingle. Thank you Shiiine for delivering us musical excellence. Long after the band had left the stage, the crowd sang on. All together now, “Oh oh, la la”.   The Godfathers. Thunderous. A brilliant set. Coyne was imperious. A musical Mobster. There is a really hard edge to an already edgy band these days. So, they continue to evolve. A fine fine rock band. 'Birth, School, Work, Death' had the joint absolutely kicking. Shame the wonderfully poignant ‘When Am I Coming Down’ was delivered so brutally, but a minor issue in an outstanding set. 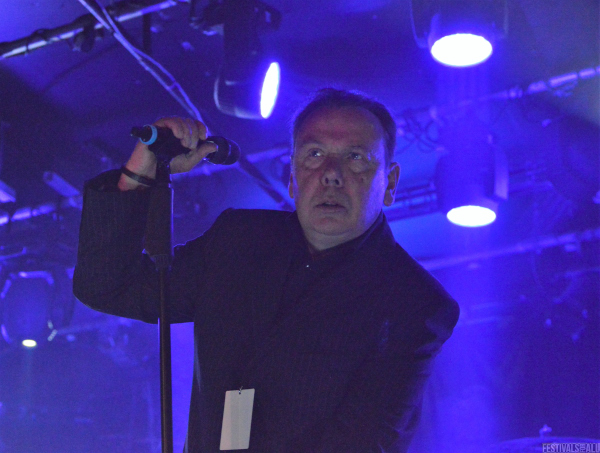 Shiiine manages every year to deliver lesser known outfits (to this old reviewer at least) that simply blow you away; So – The FFA Find of the Festival Award 2018 goes to…. Bis! A stunning Indie band, sounding as fresh as a daisy. Some lovely soundscapes and harmonies. Excellent. EMF ! If ever a band captured and encapsulated the Shiiine ethos it was EMF. Perhaps a tad under-rehearsed, but you know what? It really didn’t matter, cos like many in the audience, here were a band Who. Kept. The. Faith. There was a fire in Atkins eyes that still burned bright after twenty-five years. The real spirit of a golden age – right there on that stage. Talk about a connection between artist and crowd. A great lead-in with ‘Children’ and then the whole arena was up and away. A bouncing atmosphere. EMF captured it all perfectly. A teeny tiny tear may well have formed in this old wizened Reviewers eyes at the wonder of it all. Flowered-Up love. Get in. 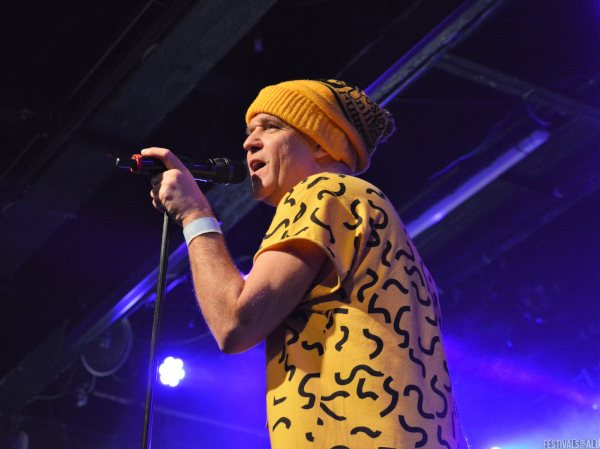 Another splendid day of happenings. Openers Deja Vega set the tone with a great set in Skyline, before a superb acoustic set from Gaz Whelan in the always excellent Inn on the Green. Founder member Whelan played a selection of Happy Monday’s classics, and like much in the unplugged / undrugged format, an acoustic setting exposes little musical nuances and lyrical tricks and flicks that so often get swamped in the full-on electric band format. Whelan was absolutely excellent and it was a delight to look under the Monday’s bonnet and appreciate the wonders within. 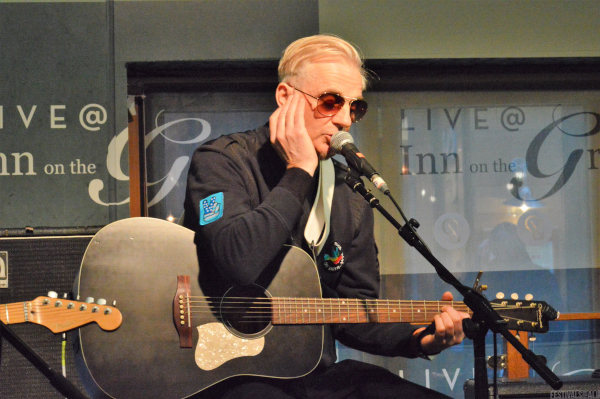 Shiiine works wonders on the non-music front too, with talks, films, exhibitions and the like. FFA were overwhelmed by the Peter Walsh photography exhibition. A great photographer can capture a single slice of time, one photo image, and express a universe of feelings and emotions. Rather like Shiiine itself, Walsh captures the mood of an entire generation in this portfolio. His photographs of Oasis, Mondays, The Hacienda scene, et al, are truly iconic. A single image will trigger a million memories and emotions. Check ‘em out Here. Alternative Set Of The Festival? Look no further than the blistering performance from Stereo MC’s. High Energy doesn’t even begin to describe this set. An absolute whirlwind of excellence. The place was jumping, and the already well-up-for-it crowd were going wild. Another classic Shiiine set. 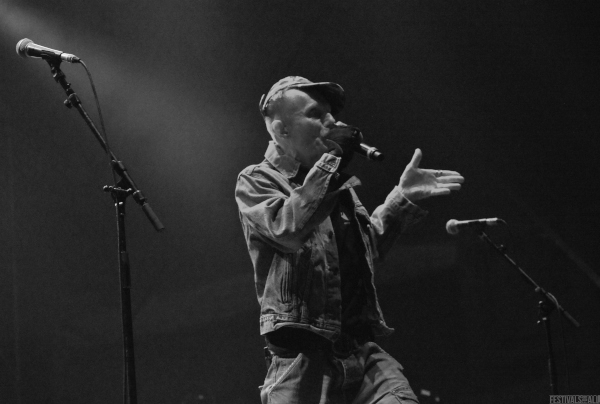 Nothing to say about Shiiine favourite Peter Hook & The Light that has not already been said. Hooky was on form. Great band. Great atmosphere. This Reviewer had some doubts about electronica as Sunday headliners – surely the Shiiine guys would play safe with a sing-along anthemic guitar band? But no, Orbital it was – and it proved to be a triumph. The place was packed, the crowd shape shifted, and the head-lighted duo provided an audio-visual extravaganza. An immense show. Some neat tunes from Psyence closed it all off in fine style.

So there you go. Shiiine captures the very essence of a time and place and plays it all back, in its entirety. A wonderful weekend. 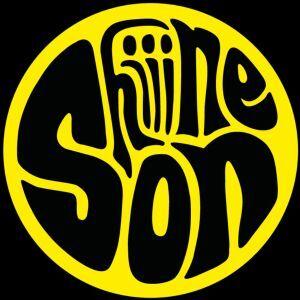 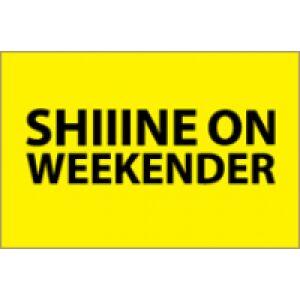