A cheeky review whilst running the SolarCycleStage (pedal/solar powered performance space) and waiting for bands maaan..

Saturday
I can see a Piano Bar in a Horse Box, a Blacksmiths, the Healing Area, with currents tones of a Gong Bath, Peace Circle filled up with grass seated hippy folk - just like the old days. all the the beat of a Psytrance Band on the Main Stage.

OOTO is the last stop in the Offgrid Uk Festival Season and has a fine record of good weather for its Equinoxal Event. This year surrounded by lovely fields and woodland in its new and better setting. Totally well almost totally powered by the Sun - apart from the generator powering the main stage so I hear. There are such lovely eateries on site such as The Outer Regions - top Tibetian Cuisine at its best - Buddahfield Cafe and too many more to get around.

Make your own Rocket Stove, listen to talks on anything from Earth Energies to Tesla to how we descended from Grapefruit. Films of a "Just Do It" / Zeitgeisty variety plus an escapist movie space for vegging out to see Inception/Into The Wild etc.

A man selling imaginary friends at £3.50 each wearing huge adidas trainers just caught my eye someone wants to see them before they buy. Circus Skills, Fire Show from Poi Passion, rumour has it a procession is planned for later but it may or may not happen - OOTO is more LOOSO this year and much better for it. Sound systems are easily capable of breaking all known noise regs but bubble under them smiling. Who's the greenest on the field? The Raw Food Sauna has to come close.

reviewed by Mark - quite simply the best festival headline band ever - i'll take his word - though it may not be a universal one the Electronic Officianardos certainly agree.

Now on the wind down side of OOTO - the public have gone but the lovely raggle taggle band of travellers and festival facilitators remain to put it all to bed before beetling off in a wacky races procession of converted vehicles to wherever these beautiful people go for the cold bit of the year.

Statement from the Festival Organizer and pictures to follow shortly.... 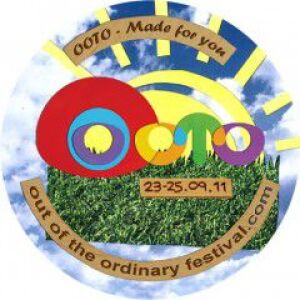 Out of The Ordinary Festival

Out of The Ordinary Festival