Saturday began a little later than planned. With us and a few others hanging around our campervan, letting the intriguing sounds of the festival float over us and the smells of food entice our taste buds. We eventually slopped round to the Other stage for the Pixies. A favourite of BF who had a whale of a time while I went back and forth on missions for a variety of festival related objects. The mud was by now very spongy but still sloppy in the high traffic areas but nothing to worry about for us hardened festival goers with our sturdy wellie boots and experienced thigh muscles.

After the Pixies we raced over to the Pyramid stage to catch some of Metallica. Another favourite of BF but not mine. However for someone not that interested in metal rock, I was impressed. The band performed so tight, it sounded incredible, not a note or a screech out of place. An onslaught of pure rock guitar noise and it was stupendous! The show was impressive, loud and kicked ass! We didn’t stay right to the end as we wanted to hot foot it over to the Circus Big top for the headlining acts. 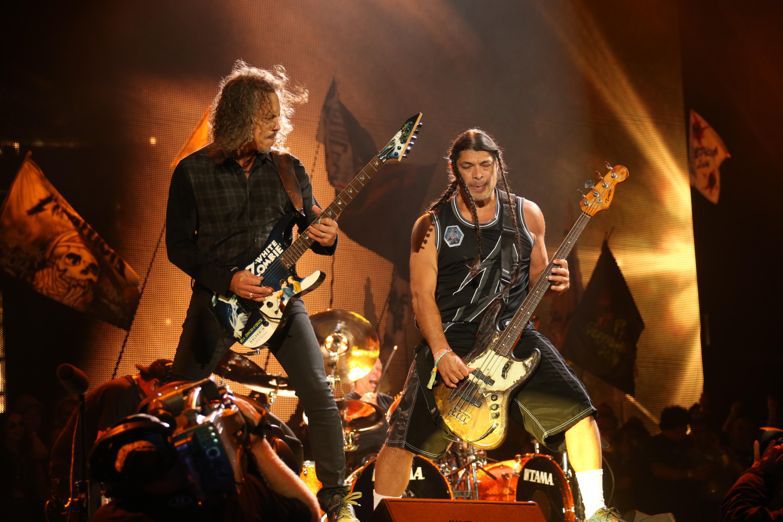 Although Glastonbury is promoted with incredible musical headliners, you can also guarantee seeing the most incredible circus, trapeze and theatre acts there too. The best of the best from around the world. If you can't find anything to tickle your fancy music wise you can wander around the theatre and circus fields and come across the most hilarious and courageous. From street artists to dare devils. This place has it all. We hit the circus tent about 11pm and caught the last hour of acts. A delightful woman swinging from a huge rope swing, some glow in the dark LED stick twirling that was really quite psychedelic, an incredible Diablo skilled gent that really was very impressive and then finally the finale act: Briefs. A group of Australian guys doing a male Burlesque show that was absolutely fantastic. If you like good looking males, with hot bodies, writhing around on stage behind feathers then this is the show for you. The finale of their act being a ripped gent on a trapeze swing above a huge bird bath style bowl of water. He twirled in it, doused us with it, gyrated in it, flexed his muscles in it, jiggled his pert tattooed butt in it, splashed us with it, and generally turned us all on, in his shallow bath of water. The place erupted with joy and excitement. What an orgasmic headliner...We all got wet! 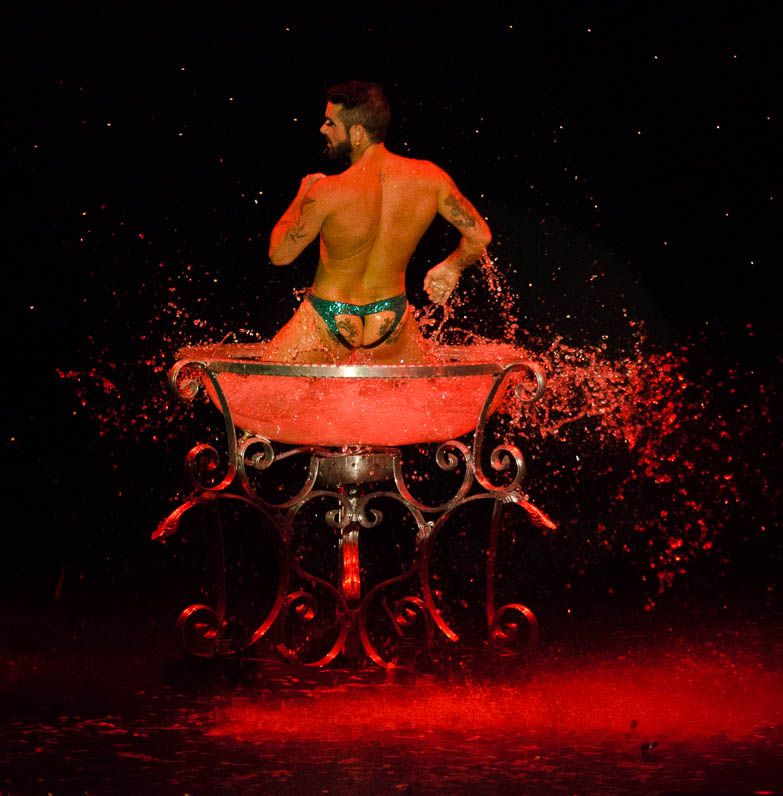 We continued our Saturday night with another wander through Shangri-La, The Common, Block 9 and Unfairground. Doing the same, listening to the sounds of the music, watching happy people and stomping our feet to festivals late night heartbeat. We retired late to the best spot in the whole festival for watching everything going on. It’s up above the Tipi field, next to Pennard hill and The Park. It’s a steep short climb to the most stunning view over the festival. You have an incredible view of Arcadia's big scary exploding spider. You can see all the felids laid out below you. Lasers search the sky and sounds from every direction meet your ears. Flags from the hill flap around you in the wind. It’s awesome yet peaceful at the same time. We snuggled under a blanket and watched the spider explode through its crazy flashing 3am finale show. Climbing into bed at just after 5am with each other to giggle and warm up with snuggles. 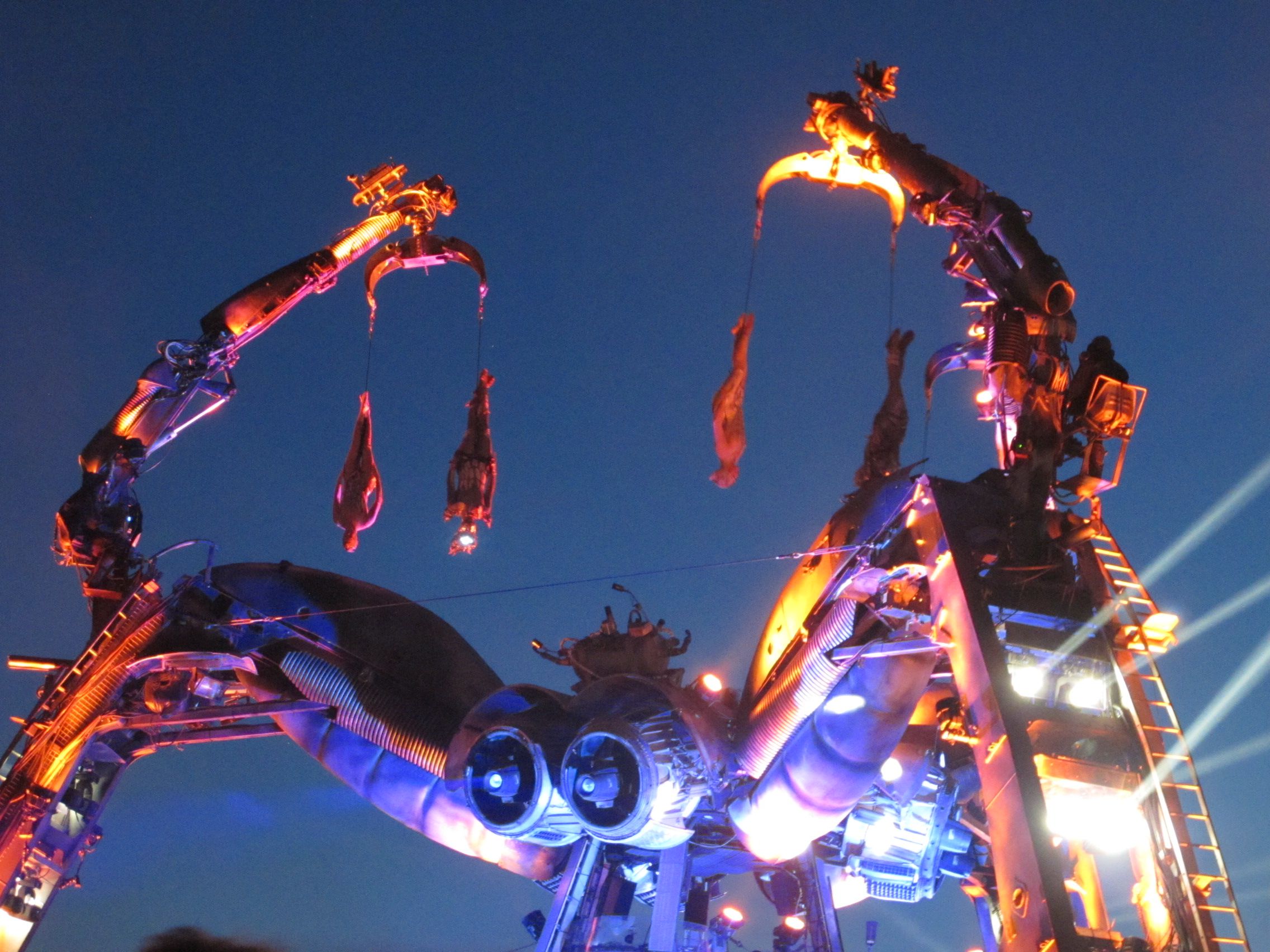 So, it's Sunday already!! Dolly Parton calls and our last day plans for the final day beacon. We awoke late which was understandable. All I could think of was food. There is something incredible about the amount of food on offer at Glastonbury. Prices are not the best, being a bit on the heavy side. But the selection and options are incredible. I think you can buy something from every country over the whole site. The options for veggie or vegan are excellent, especially at the Greenfields end of the festival where everything gets a bit more eco-friendly and environmental. Not being a veggie or a vegan I had all the options available to me. I trundled down on a mission to the food quarter and found myself a delicious halloumi and chicken wrap with all the trimmings. Followed by a syrupy crepe and an ethical cup of coffee with soya. Fantastic. All the time I was eating, I was eyeing up what I would like to eat later and what I might have for breakfast the next day. That’s the great thing about festival life of late nights and long lay ins, it makes it even more acceptable to have lunch for breakfast, my favourite start to the day always always being curry. 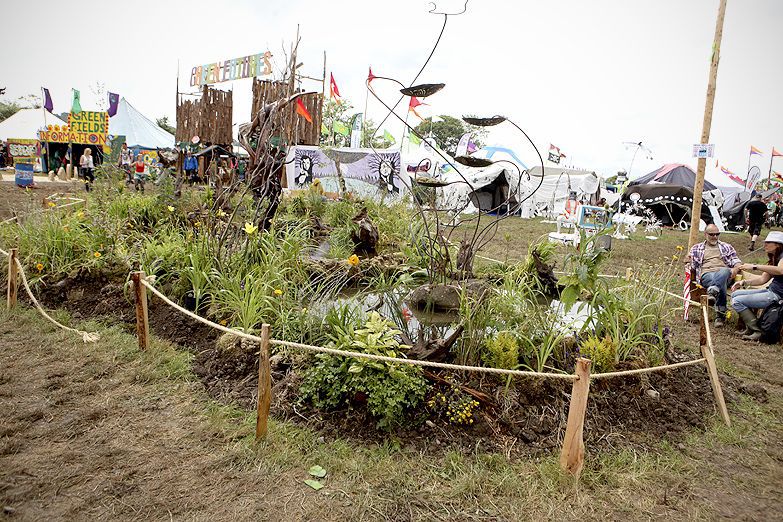 There was a large group of us trouping over to see Dolly Parton. The BF and I not big fans but willing to go and see who is widely accepted by others as a living legend. The pushing and shoving to get into the Pyramid stage field was horrendous. The field was jam packed and everyone just kept on coming. Dolly came on and belted out a few tracks, sadly the Dolly Mob dance, intended for the hit Jolene, did not have the impact expected and we could only spot a couple of people doing it when she sang it out. Then it was a couple more before the pushing and shoving of an overcrowded field got to us and we just had to get out of there. 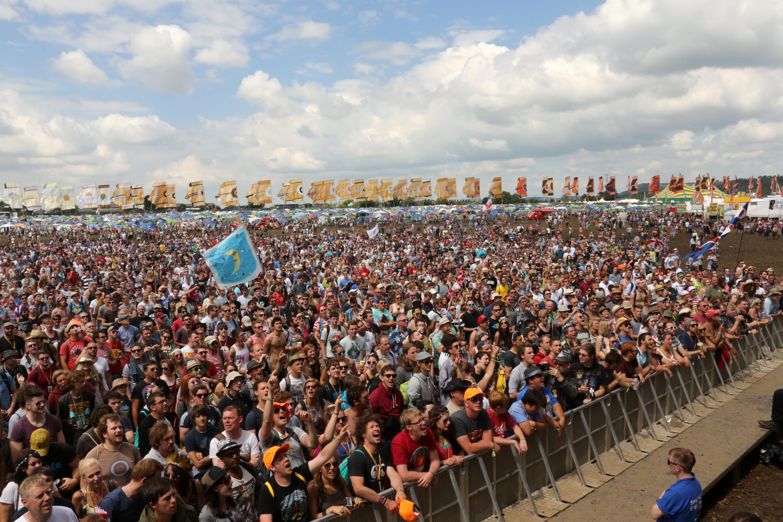 We pigeon stepped like sardines for a while, quite squashed and quite scary. Then breaking free we meandered around Williams Green and ate more food, drank more cups of delicious coffee and smooth juices. We went up to the Greenfields and admired the huge Polar bear, the snow drenched park around him. We went through the fields of Avalon and snoozed in front of the helterskelter, catching some sun and sleep with the sounds of people going weeeeeeeeeee down the slide. 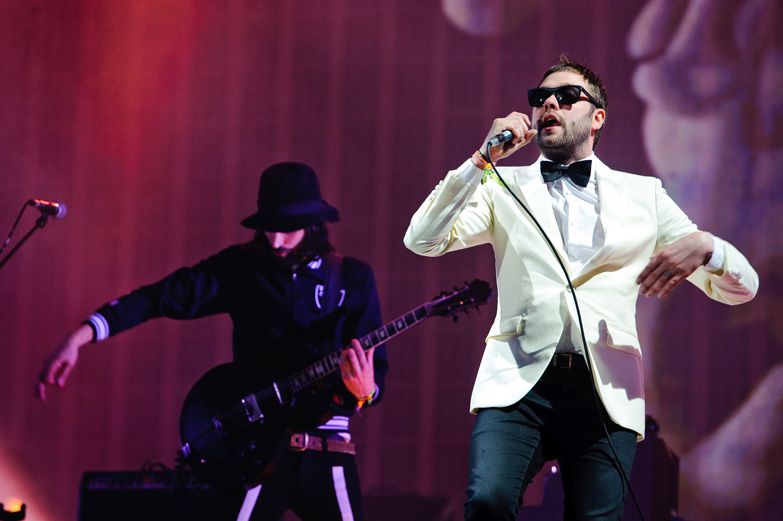 Our last big artist was the awesome Kasabian on the pyramid stage. They absolutely rocked it. They came out big, played big, stayed big and ended big. Their usual big rock style interwound with their new dance-style processed beats. They did a beautiful acoustic cover of Crazy, originally by Gnarles Barkley and then as a thank you to their fans in the later half of their set, they covered Fat Boy Slims Praise You. It was all brilliant. They performed really well, got the crowd absolutely jumping and singing along to hit after hit. Their ending was large loud and explosive. Just a perfect pyramid stage Grande ending for the Granddaddy of all stages.

We left the field all smiles and satisfaction and went to the Spike bar opposite the Glade. An incredibly well built bar wrapped around a tree with the biggest disco ball ever shining over all the leaves. It never ceases to amaze me that at Glastonbury after all these years we still find new places. And people go to so much effort. As if there are not enough bars or music venues across the whole site, you still find places nestled in corners. Like the Spike bar for instance: a small raised wooden bar with music playing, linked to a seated area around the discos ball tree with tiered gardens and different music playing, linked to a small dance floor with yet more music playing. In the space of 20 feet this bar has organised three themed areas and three types of music – crazy! We hung out waiting for friends that never appeared, so decided to head up to Arcadia for some final high octane action. 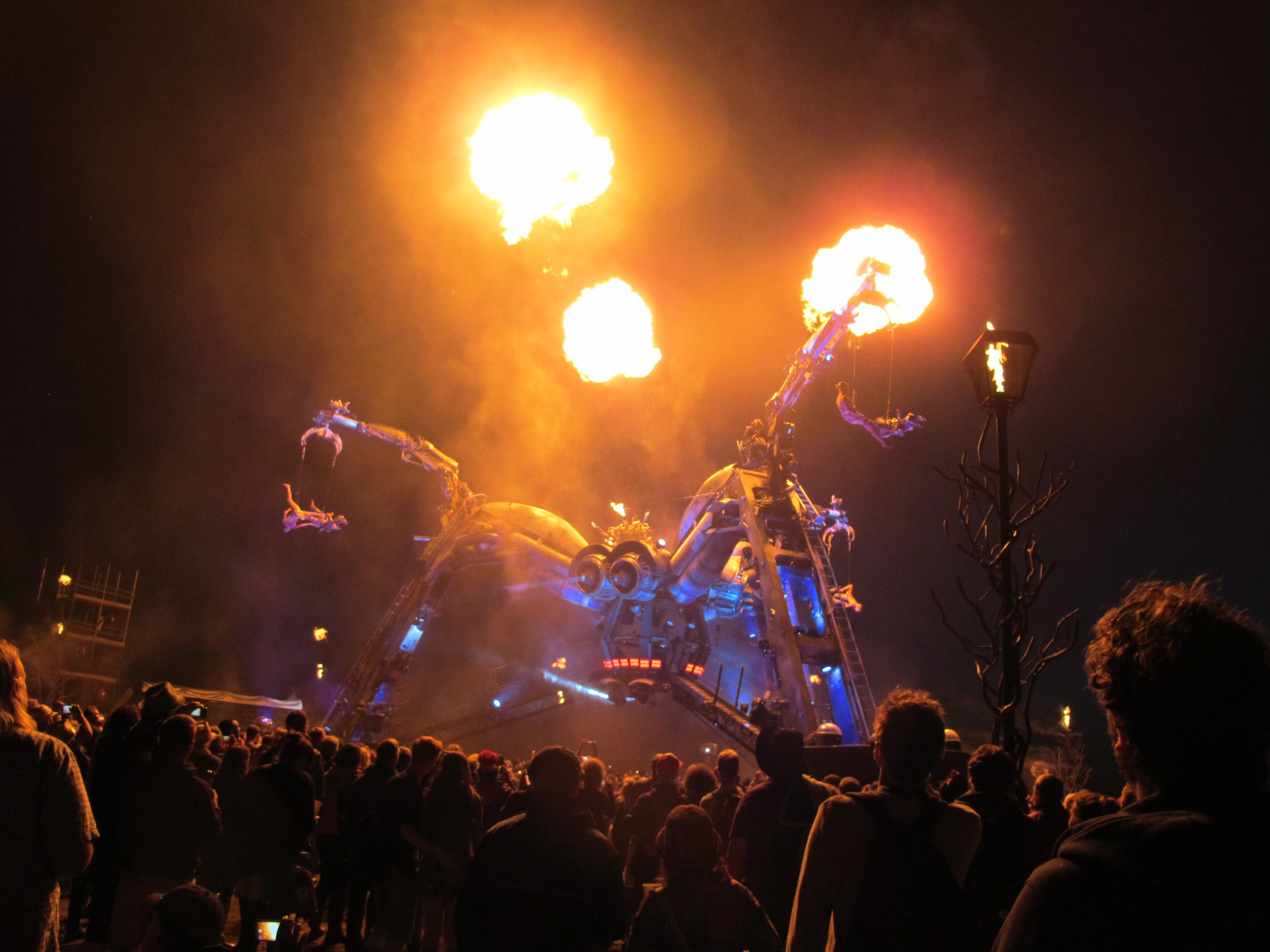 Taking rather a long time to reach the field as we detoured via base camp and the viewing point hill above The Park, we eventually reached the Arcadia fields around 2am. Just in time to catch the finale of finales for the whole site. And unbelievably there were seats available in the top of the bleachers – best seats in the house! We sat our weary feet, rested our sore aching backs and feasted our eyes on the crazy spider DJ booth shaking and pointing its lasers all across the land. It is a huge scary monster is the Arcadia spider and boy does it throw out the high octane beats and keep your eyes pinned open with its fire ball eruptions and sky seeking laser shows. 3am saw the finale boom and crash, bang and smash its way through our eardrums and over our eyes. We rocked from side to side and expelled sounds of awe. Until the spider flashed out no more.

The far and distant sounds of Shangri-La being the final closing venue across the site, the only remaining bass sound coming to us. The sun rounding the planet, making its intentions known to rise very soon. We stumbled back to base camp, The Small World stage also still thrumming away with mellow string sounds. We climbed into our bed. Our ears, eyes, mind and body assaulted and assorted into strange memories and images that like every year, we will never ever forget. Never to be overridden until we return next year, to do it all again. 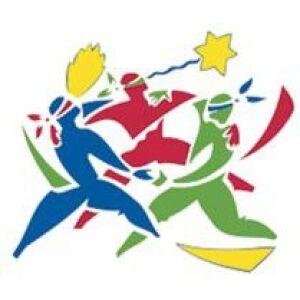