Tom and I are both keen skiers/borders, trying to hit the slopes every year. Unfortunately, with our impending trip, the risk of injury is too high and we’ll have to miss our annual trip to the mountains – discounting when we cycle through the Alps and the Himalayas.  When you couple our love for all things snowy, with our pedal powered musical adventure, it’s quite obvious that Freeze festival is our list of things to do.

Snow. Music. Après ski. The perfect combination. One however, that is normally a 16 hour journey away.  But, when Freeze Festival comes to town, it gives you the opportunity to experience the Alpine lifestyle on your doorstep.

Stepping of the train and walking across the bridge, it was clear that we were going to have a good weekend. You could hear the bass line pumping, you could see the ridiculously steep slope glistening, and you could feel the atmosphere around the whole place. Freeze festival had started and we were so glad to be part of it.

The weekend ahead of us, presented an opportunity to see some of the best snowboarders and skiers in the world, and, a huge medley of different music; some of the best British dance music, a smidgen of hip-hop and a huge dollop of Indie.

I won’t go one too much about the amazingly high standard of skiing/boarding, BUT, it was just that. Every single jump had the crowd screaming and applauding. We were lucky enough to go up on the ramp and witness the madness close up. Battersea Power Station provides an iconic background to a run-up that was ‘sketchy’ to say the least, followed by a gap that dwarfed the line of eagerly waiting snap happy photographers below. It was clear to see why this location had been chosen.

On Friday night, we were promoting our forthcoming adventure; pottering around from bar to bar, handing out flyers, enjoying a few ales and sometimes listening to a bit of music. Consequently, the first act we witnessed was the ever impressive Zane Lowe. This was not the first time we have been to one of his sets, and it certainly won’t be the last. Headliners, Grove Armada spinning their Red Light set, followed Zane Lowe, and, although not their best ever set, they didn’t disappoint. The tent was rammed, but it was well worth it, they played the majority of their hits and the place was jumping.

Saturday was a big day. We knew our way around the relatively small site, so we were more efficient at trying to speak to the 17,000 people whilst enjoying the sights and sounds. We wanted to see everyone and everything, so we wandered around and caught little bits of Spector, Fixers, Baskerville and fantastic DJ sets in the various bars. The highlight of the early evening music was, by far and away, True Ingredients. We had been recommended to go and watch them, and luckily for us, they were performing across the weekend, in the Desperados tent. A description of ‘A good, English, Black Eyed Peas’, wouldn’t be far wrong. They managed to get a relatively small audience singing their songs, bouncing to the beat and craving more!  What an awesome group, and I am certain that they will be a household name before too long.

We also got to see Does It Offend You Yeah? An awesome set, mixing dubstep with rocking metal, and like the rest of the performers at the weekend, they had a great energy and they got the crowd going.


It was then on to the main event – Everything Everything, followed by The Streets. Two amazing acts that we couldn’t wait to see. Despite the larger crowd, the place was feeling pretty flat before Everything Everything came to the stage. With no speakers at the back of the tent and thousands of people in front of us, it was hard to appreciate the brilliance in front of us. It picked up when The Streets started playing their well known songs; the realisation kicked in that this was their last ever London performance (until the next one that is!) and everyone thought they better make the most of it.

Again, the main stage closed at ten, and the two headline acts were great and we had a fantastic time amongst some great friends.  All in all, the weekend was amazing and Freeze festival is definitely one worth going to. It mixes music, snow and beer, it’s a shame we won’t be around next year to go again.  If you are looking for something to end your festival season with, we strongly recommend heading over to the South West of London.

Article by Phil Saunders and Tom Nelson aka The Daring Dynamos

On the 17th March 2012, they leave London to embark on an epic journey. The plan: to cycle around the world, have musical adventures and raise a big pile of cash for the fantastic charity War Child to see more click HERE. 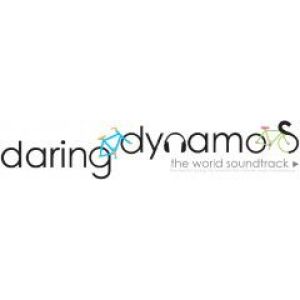 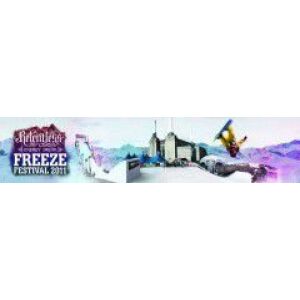