The first musicians, comedians, composers, poets and filmmakers from across the decades, including Madness, Wire, Arthur Brown, Nick Lowe, Yo La Tengo and more have been announced for the Ray Davies curated Meltdown at London's Southbank Centre.

The line-up of Meltdown's comedy and poetry includes Terry Jones and Michael Palin, John Cooper Clarke, John Otway, and Roger McGough.
Saturday 11th June will see the re-creation of 1960s British TV pop show Ready Steady Go!, a pioneering music programme that featured legendary performances from The Beatles, The Stones, The Who, Jimi Hendrix, Otis Redding, Dusty Springfield as well as many appearances by The Kinks. This special Meltdown edition includes original stars from the era alongside contemporary artists specially chosen by the show's director, legendary TV producer and Dusty's manager Vicki Wickham. The line up for Ready Steady Go! will be announced shortly and tickets for this event will go on sale in April.
Film and talks at Meltdown will include a screening of 'Screen Epiphany'. 'The Meltdown Observer Talk' will see the Ray Davies in conversation with filmmaker Julien Temple. Festival founder Michael Eavis will talk about forty years of the Glastonbury Festival on Friday 10 June. On Saturday 18 June, Apple Records A&R man Peter Asher reprises his 'Musical Memoir of 1960s and Beyond' and Paul Morley will host a tribute to the late Tony Wilson with the aid of music and rare footage. Over both weekends, The Royal Festival Hall's Clore Ballroom will be the location for post-show dancing and DJ sets. Further details to be announced.

Meltdown takes place over all 21 acres of the Southbank Centre, including the riverside, Royal Festival Hall and Queen Elizabeth Hall. The dates for Meltdown 2011 are confirmed as Friday 10th until Sunday 19th June 2011. 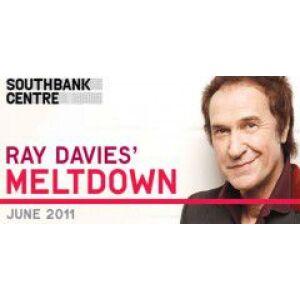