Knockengorroch Festival review 2014
Down and dirty festival with fun loving people, deep and meaningful sounds all sited in the most stunning countryside, thank you Knockengorroch
Tweet

Knockengorroch festival is situated along the most tranquil track you could possibly hope to travel on your way to any festival. The staff who meet you at the end of the track to sort out your passes were helpful and happy every time we came or went from the site. Be prepared! The last section of track that takes you from the ticket office to the main camping and parking fields is not as friendly. An intimidating and winding stretch of road yet surrounded by furry forestry beauty. The artificially raised platform has sheer drops into a manmade water gully on one side or the rustic depths of the boggy marshland that surrounds such forests on the other. The track is made of smooth enough tarmac but is single track. All the way in. and its two way…

There are passing places available, but reversing towards them with oncoming traffic lights in your eyes and limited ability to notice the edge of the platform is quite a scary experience! My advice – get there by daylight and stay put! 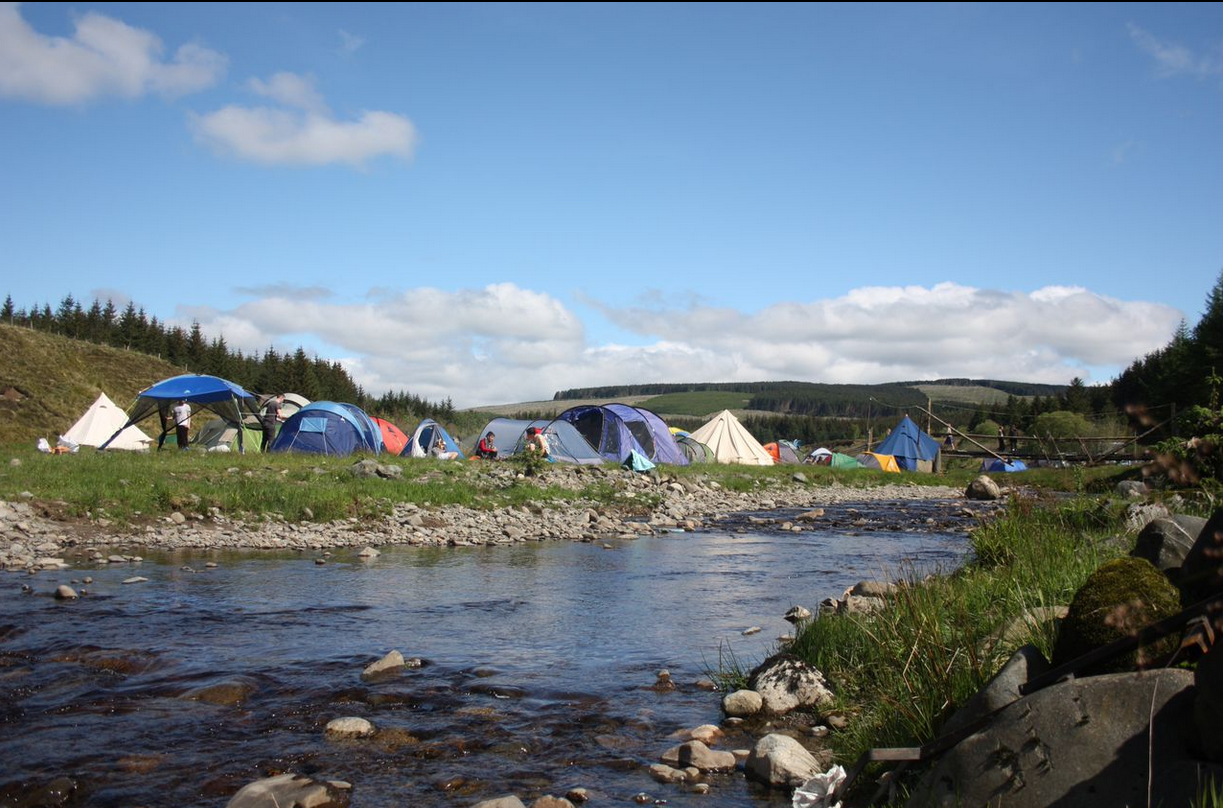 Once you reach the long downwards sweeping gravel track that then leads you to the main festival site, you are in awe of the opening scenery afore you. The wide gurgling river, the rickety footbridges, the Highland Coos and the smell of fires and food meet you and greet you. Tent campers can cross the river at a number of points to camp on small eyelets or riverbank sides. Campervans and caravans (and overspill tents) are all pitched around the central wood and beyond, right along the full face of the festival site. The sprawling camping completely surrounds most sides of the festival, and gives it a cosy intimate feel. You can camp under the stars or under the trees. Beautiful.

There was good access right up to the festival main arena by car and straight through to an impressive flat area for disabled campers. Those people in wheelchairs seemed to cope well with these arrangements as the surrounding access points were kept flat, free from obstacles and opened out to the front of the main stage area, disabled toilets and food stalls. There were so many people with children buggies too, they traversed the site with ease. The most capable child buggy being a converted wheelbarrow, with cushions, blankets and baby on board.

Never before have I seen so many dogs at a festival too. It is definitely a dog friendly affair. Most of which were kept on leads and were very well behaved. I commend those who truly understood the dog psychology in the room and made the festival safe and fun for their four legged friends.

Friday kicked off with interactive sessions of Yoga, TaiChi and Drum / Gong workshops in the Tallyn Tent. Not all of it could we take part in, our bodies just are not that flexible! But you could sit in the communal fire area and watch everyone else being exceptional contortionists.

Music on the Bo-Airigh stage (main stage) began with the incredibly lively Kakatsitsi Drummers, from the Ga tribe of Southern Ghana. Their performance included excellent drumming riffs, singing and chanting, using the traditional rhythms and sounds of Africa to get the Knock crowd on their feet. There final two songs booming out accompanied by three traditional African dancers, giving the crowd all the encouragement and demonstration they needed to dance like an African. 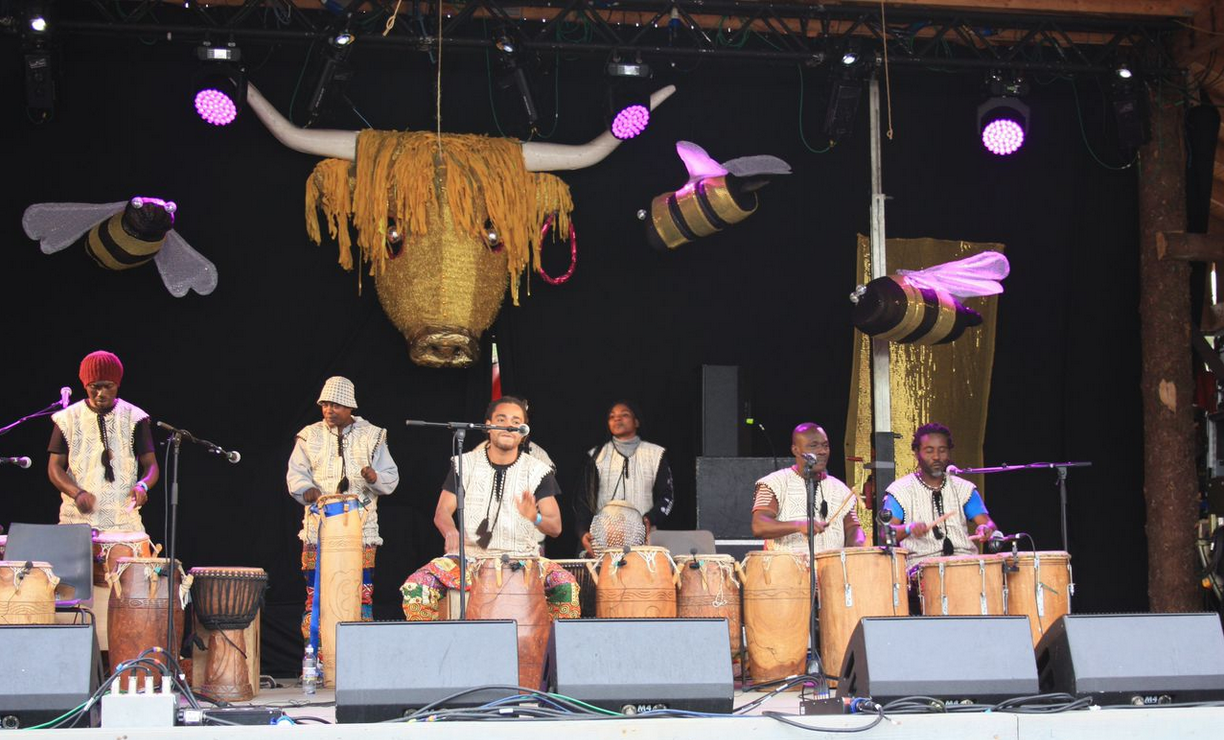 Next was a quick skip over to the Sheiling tent to listen to Big Face Tiny Features who delivered an incredibly rocky blues set. The crowd was small but very enthusiastic and the band delivered an interchanging blues and rock sound, especially the song Leopardskin Leotard, a brilliant gritty song.

Back to the Bo-Airigh stage for Tantz who were incredibly powerful in their unique sound. Imagine a cross between 1920s, and what I recognised as Turkish music but was told it was in fact ‘Klezmer’ which is an Eastern European style of music. It got everyone moving and a grooving, some breaking out the Charleston interjected with high kicks and stomping toe flicks. The music was jumping, manic and enticing. The clarinet player jumped into the middle of the audience at one point, creating a huge circle of dancers and winding them, ever decreasing into a tight manic dancing circle with his trilling and thrilling sounds piping them on.

The late afternoon and early evening were spent enjoying the food delights on offer while sitting on the green grass of Nether Knokrach, with our backs resting on the wall of the grass roofed Longhouse, listening to the sounds waft by of many a fiddle and flute. A reasonable selection of eating was available for the size of the festival. A range of falafels, crepes, pizzas and burgers as well as more basic ‘anything in a roll’ stops too.

The weather was kind all weekend, with the occasional spattering of rain, just to remind you it was Scotland, and more occasional outbreaks of sunshine from among the clouds, to temp you that it was indeed summer time. Avoiding the midges from between 6-8pm could become a bit tiresome but we soon learned the solution (if you hadn’t purchased one of the widely available midge nets) was to either be:

a) Near a fire and smoke

Otherwise they could be relentless for a while, until the temperature dropped and they disappeared again. 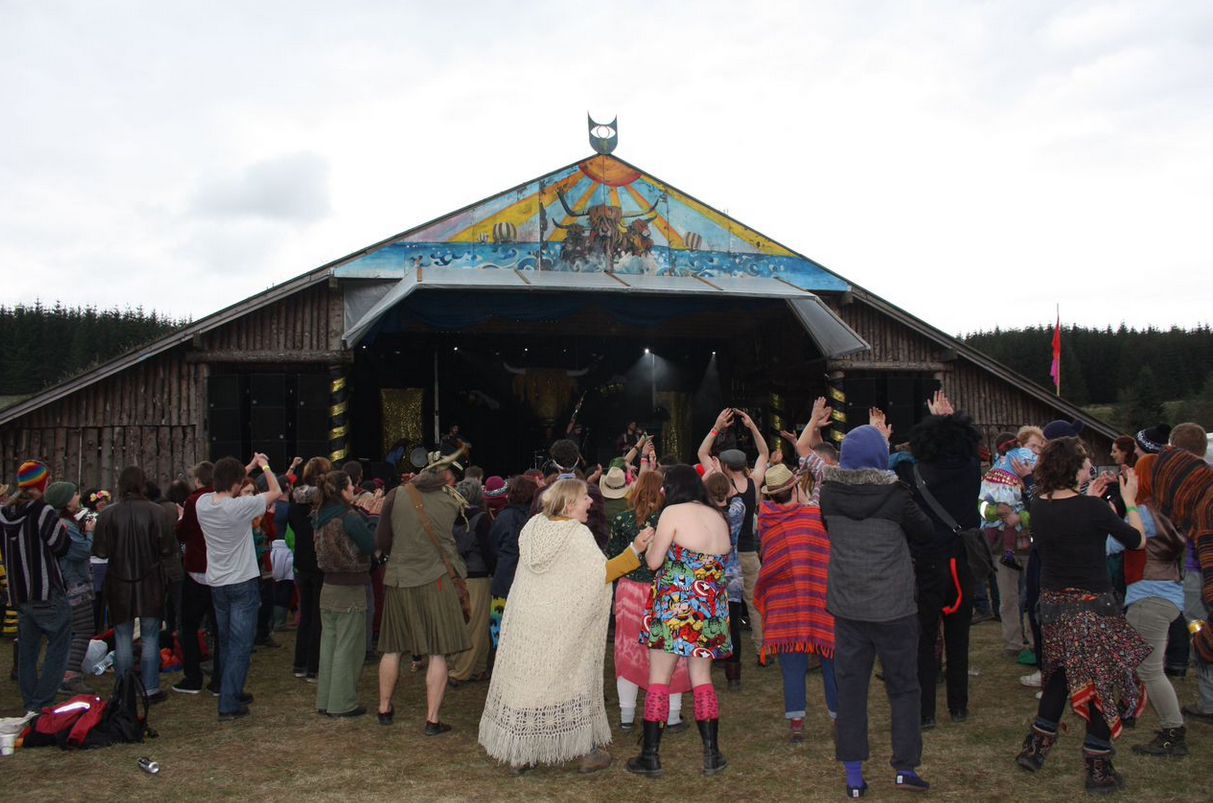 Sketch were outstanding, a cross over between ACDC, The South Bank show and a whole lot of dance floor celtic sounds. Mario ‘done good’ with this Powered up Super Ceilidh sound. Their music thumped and smoozed over the crowd getting the place warmed up, on their feet, and Scottish pirouetting around before the late arriving but crowd pleasing Neville Staple Band.

Neville pumped out the hits and everyone responded by ska-dancing their hearts out and shouting into the air with all the lyrics they knew. The ska-punk-rock-set raised the roof as the final Friday act on the Bo-Airigh stage.

Next to the headset Disco in the Tallyn Tent– not for the sounds but for the giggle. It doesn’t matter if all the headsets are in use, you can still go in and enjoy the rhythmic squelch of beat tramping footsteps. It’s quite an experience, letting the rhythm of the dancing bodies move you to groove. The exhilaration as people smooch up to you and share dance moves with you, some taking quite a while to notice you do not have headphones on and are in fact dancing along to them dancing along. It’s wonderful.

A final wobble into the Sheiling tent for the super sounds of Wormfood. A collection of various DJs who cruised and amused us with their various musical renditions of Ceilidh, rock and roll and dance floor anthems until our poor little feet could take it no more and we left the jiving for the soothing sleeping forest floor. 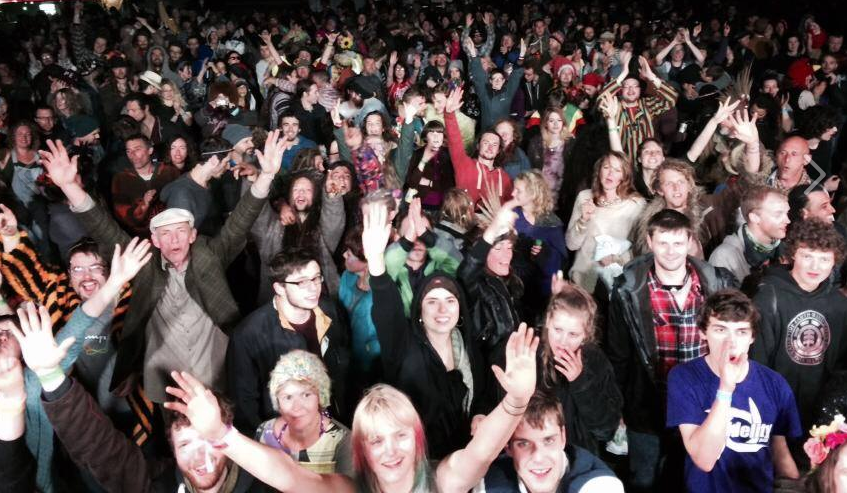 The Dingley Dell of the forest and the slow and soothing way the festival awakes doesn’t rush you into the day. By midday we were still under blankets, the smell of other people's bacon rolling through our windows, the cups of tea still flowing and our smiles still glowing. A slow trundle to the river and a long laze beside it was in order. The bumbling trickle of the water, the people making dams, moving rocks and sloshing about in their wellies, were entertaining enough for this brisk yet sun shining morning. It was soon afternoon and the sounds of the SambaYaBamba band drifted over our ears and our wet feet, reminding us that there was in fact a festival to be enjoyed over there!

But the Knock is just one of those small quaint festivals, that like the river, you can find yourself bumbling along, eating around the fire pit, talking to lots of nice people and time flies by. The sounds of numerous tents and stages wafting over you, tapping your feet and nodding your head for hour after hour. Before we knew it, it was gone 6pm, the light was beginning to change, the midge repellents returned and Alejandro and the Magic Tombolinos were on the Bo-Airigh stage. A Balkanise inspired snake charming sound of rock the Kasbah beats, thumping folk with much high energy yelling and mainstream fusion. Getting you on your feet and enjoying the beat.

And ready for Vieux Farka Toure. An enjoyable and interesting fusion of heavy licks and strong guitar riffs, a very unique style of rock, reggae and tribal African sounds. Truly makes you move to the sound of the desert like blues.

And then off to the Fire Arena to catch the Pyroceltica Extravaganza Fire Show. Lots of fire twirling and swirling, burning and turning, throwing and catching, impressive tricks. The damp soft misty rain and squidgy under footing making it all the more mystical and interesting. But we had to run away before the end to find our place at the front of the Bo-Airigh stage for the headlining Dub Pistols. Never do they disappoint with their stage presence, wide fat boy bass and ska-punk-hip-hop-dub break beats. They threw their energy out at the audience and the audience mirrored it back. A spectacular and loud frantic pumping drum and bass finale with the stomping Mucky Weekend and it really was. The encore included a new track with plenty of audience participation – FLOW! A good ska stomp to a damp but wonderful Saturday night. Nothing that another few hours nattering to interesting people around the fire pit couldn’t dry out. 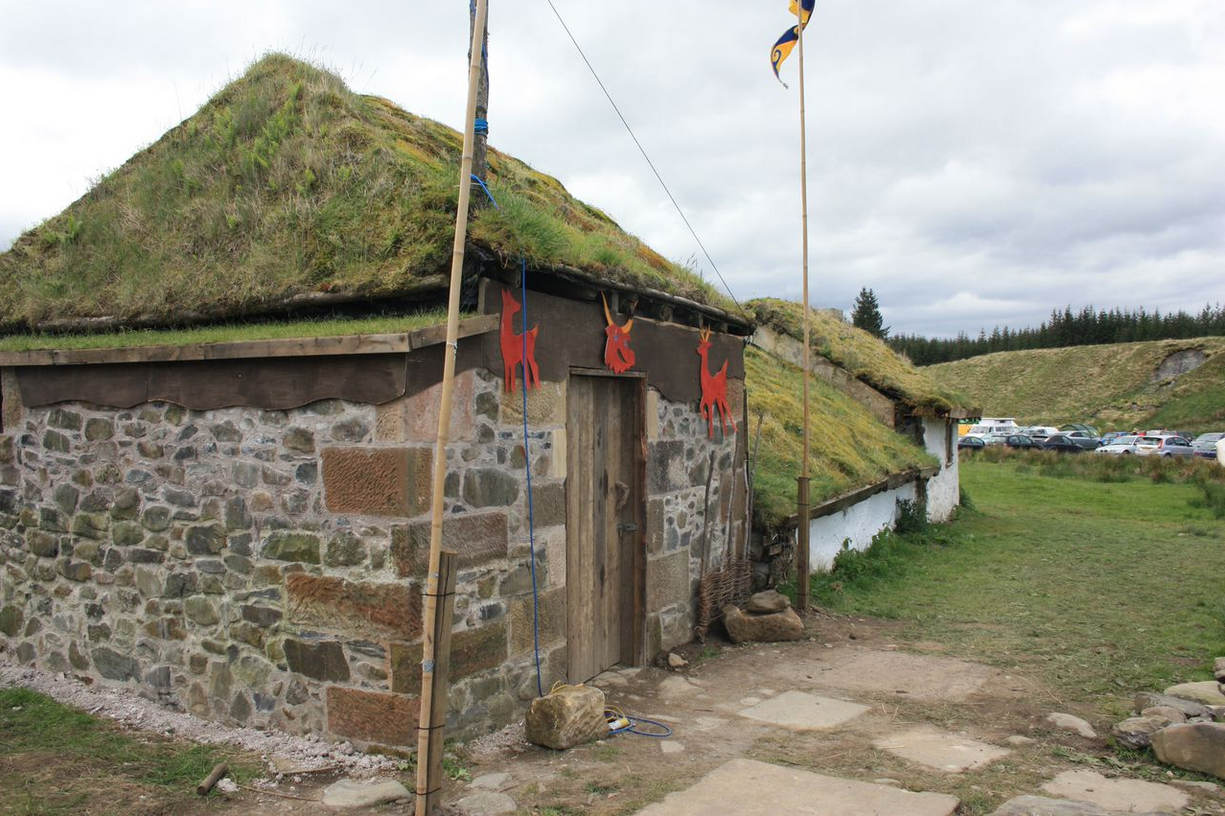 Sunday was all about the chill out. Not being able to re-join the masses with the drinking and the skanking for fear of missing work the next day. We had a time schedule to be off site and spent the best part of our waking hours wandering the site, listening to the gentle rolling sounds of folk music from the Longhouse. Or stepping up to the floor jumping beats coming for the Sheiling tent. Eventually leaving the site when the night wanted to set in and the music began to climb up tempo again. And although we were sad to be missing the finale, we were delirious with the fun in the (mostly) sun we had. Reflecting on the amazing people, the intimate nature of the festival, the incredible sounds we had heard. We couldn’t decide if it was the unusually world music that had entranced us so much or the fact it all happened in such a beautiful place. Perhaps the most enticing sound of the weekend being the bumbling river that tumbles through the World Ceilidh that is Knockengorroch. 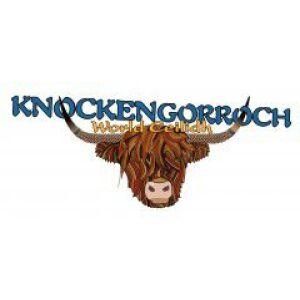