Blimey – this weekend had everything; two concurrent festivals, one location, a partial solar eclipse, great music, cult films, stunning scenery, Luvvie regalement, splendid weather, and Jar Jar Binks rocking out to Elvis … it could only be the HRH:Prog / Sci-Fi Weekender!

Most events strive for that Unique Selling Point; that differentiator that sets them apart, well those nice people operating under the HRH umbrella have it in spades. They host two concurrent, wildly different, festivals at one great location – the excellent Hafan Y Môr Holiday Park in Pwllheli, North Wales. A Prog Rock festival (HRH:Prog) AND a Sci-Fi weekend (SFW)...together… oh come on! But it all works – and works excellently. There’s a definite synergy here – the sum of the whole is indeed greater than the sum of the parts. Each event could stand on its own feet – the quality, imagination, and atmosphere was all there already – but together in combination they produced a simply awesome weekend.

Ticket price covered admission to both events at no extra charge. FFA went along expecting to revel in the Prog. Whilst I’ve been known to mutter ‘There is no spoon’, and ‘These aren't the droids we’re looking for’ on occasion – I’ll hardly class myself as a Sci-Fi buff .. I couldn't find much of interest in a Sci-Fi convention then surely? How wrong I was. Both events were absolutely splendid. They complimented each other. There was always going to be some cross-over audience but I’d like to think that there was some element of a voyage of discovery from the purists in both camps in exploring these two different worlds.

First up - Haven's Hafan Y Môr holiday centre in North Wales is an excellent venue to host the weekend. It’s massive (a former Butlins) whilst still retaining the friendly human touch, with some great facilities, decent accommodation options, and with plenty of bars and eateries at prices pretty much par for the course. It is also set in the midst of some absolutely beautiful scenery. The holiday centre even has its own beach with breath-taking views over the Llyn peninsular. So good was the March weather that we even spent time asleep on the beach (Rock & Roll eh?).

The two events ran in large arena at either end of the holiday centre a short walk apart. Indeed SFW had the larger share of the facilities with a couple of arena and breakout zones. The Main Void, the larger of the two, hosted the many meet the author / actor sessions and stage entertainment including the late night cabaret and DJ’s, whilst the other arena hosted the movies, games zones, workshops, and an absolutely huge merchandising zone catering for the every whim of the Sci-Fi, fantasy and rock fraternity.

FFA found ourselves wandering between the two environments throughout most of the day. The Prog arena was fine and dandy, with plenty of elevated seating areas, a large dancefloor and decent stage. Our only niggle would be the vagaries of the sound quality and mix away from mid centre front of stage. The music stage finished around 11-11:30pm – but SFW rocked on ‘til 3am.

The crowd at both events were certainly up for it – FFA has never witnessed so many in quality fancy dress, particularly at the SFW gig. In a largely surreal weekend all round it was not unusual for a Super Hero to pass you on a Segway, or to grab a coffee surrounded by Gremlins. The night sky was positively ablaze with light sabres. FFA found it all rather splendid. 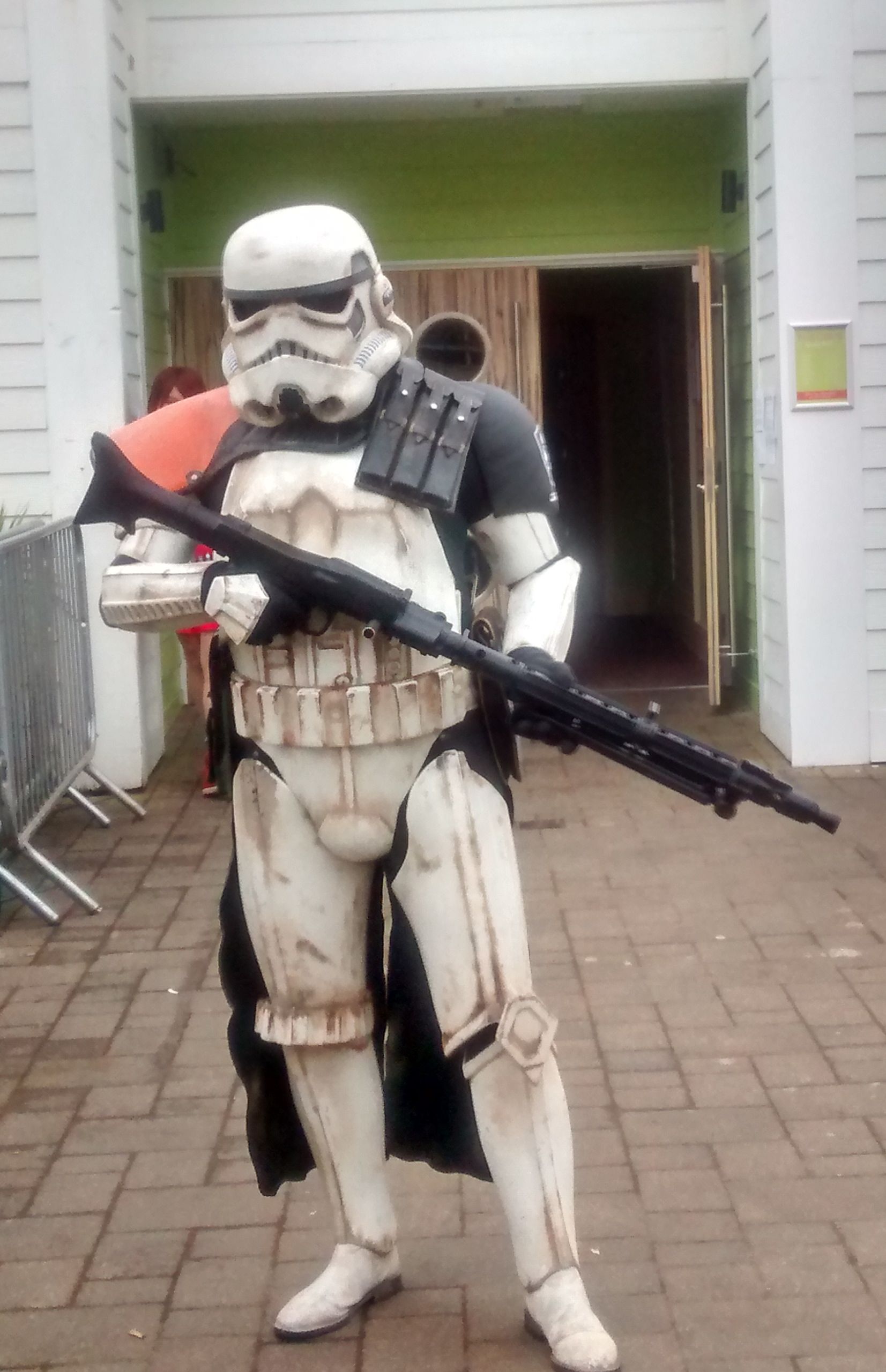 In a packed weekend of top notch action – here’s a few FFA highlights.

We kicked off the Thursday opening night with The Dream Circuit. A quality act and great start to the weekend. This is modern day Psychedelic Prog with attitude featuring some neat lead guitar breaks from Dave Hulatt for a really hippy-trippy vibe – but overlaid with a harder contemporary edge. FFA were flying.

Headliners The Skys, Lithuania’s finest, closed the music stage. These guys are fine musicians, with keyboard player Božena Buinicka particularly excelling in the complex soundscapes the band produced. The guys appeared genuinely overwhelmed by the appreciative and warm reception – it had taken them three days travel in the van from Eastern Europe. It was certainly worth the trip!

Not many events can include a partial solar eclipse in the mix – but Friday morning greeted a bleary FFA with warm clear blue skies and an excellent view of the majority of the phenomena before a couple of naughty clouds slightly marred the finale. So nice was the March weather (global warming anyone?) FFA actually decamped to the centre’s beach for some fine walking and spectacular views across the bay. This part of Wales, buffering Snowdonia, is absolutely beautiful and just added yet another layer of enjoyment to the HRH / SFW package. 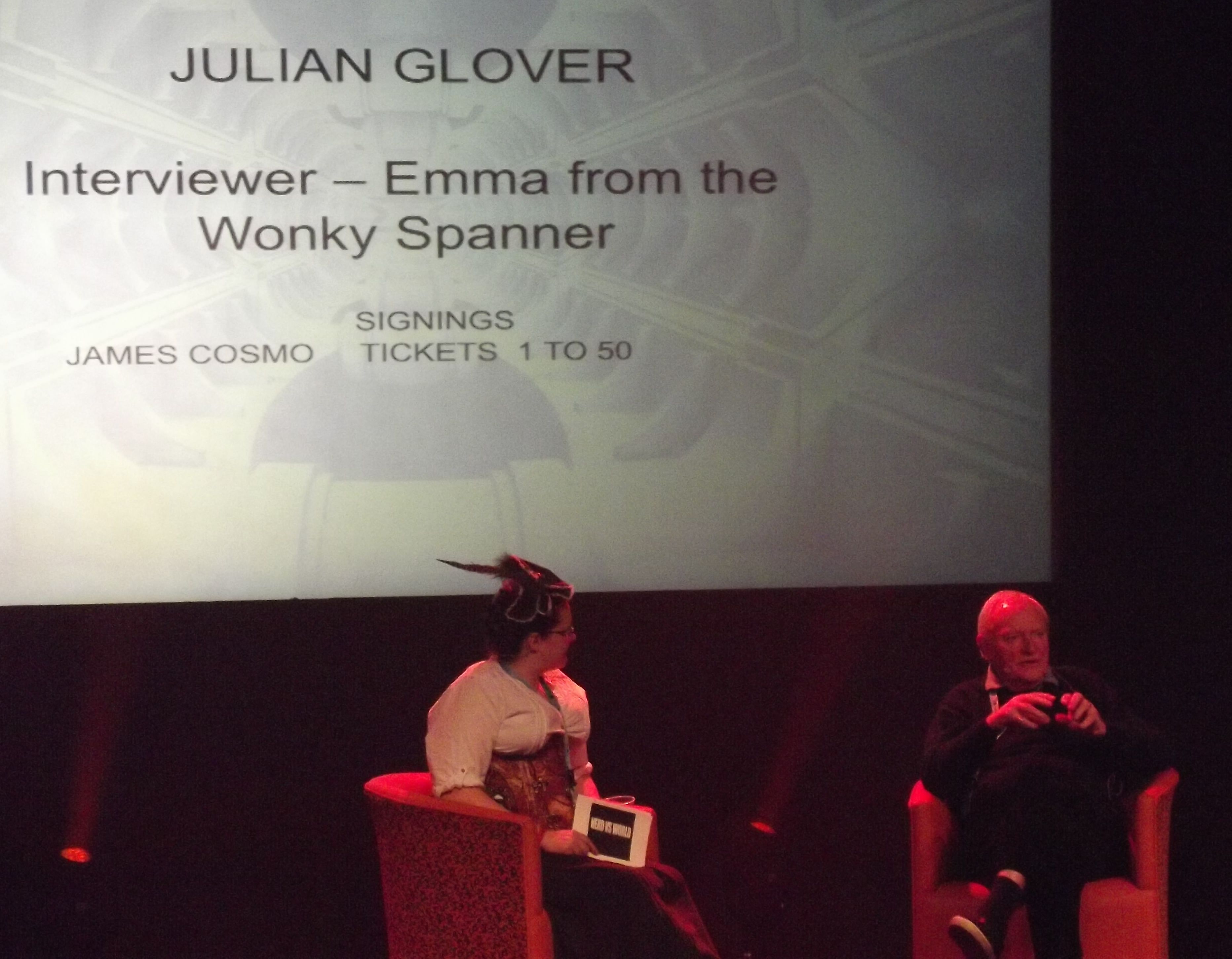 Back to SFW for a wonderful ‘Meet The Thespian’ with the marvellously entertaining actor and all round good guy Mr Julian Glover. Initially focussing on the actors work within the Sci-Fi genre the conversation quickly moved on to wider aspects of a pretty inclusive career. Littered with references to achievements and regrets, Glover laid out slices of his life with wit and humility. His unfulfilled wishes to play James Bond, and King Lear at 80 (the man will be 80 later this month) were particularly entertaining and insightful. A great hour well spent.

FFA later fought our way through the Imperial Storm Troopers for a coffee where Wonder Woman clad author Bryony Pearce held a wonderfully informal discussion in the centre’s Starbucks. Throwing fascinating light on the creative process, and expending into the wider realms of human behaviour and psychology FFA began to fully appreciate what a fabulous time can be had a Sci-Fi convention.

Back at HRH Prog FFA caught arguably two of the best sets of the whole weekend. Let’s not mince words – The Enid were wonderful. There are decades of musical excellence on show with this band and a fine back catalogue. Add some young blood and excellent later material and the immense mesmerising theatrical stage presence of front man Joe Payne and this is a very heady mix indeed. Godfrey and the band even surpassed the ethereal beauty of ‘Mockingbird’ with an absolutely magnificent version of ‘Something Wicked This Way Comes’. Overworked cliché – but ‘spine tingling’ does not even come close.

Follow that Mostly Autumn – and they did! Same Same But Different. Great musicians and material, and in singer Olivia Sparnenn Josh another wonderfully talented vocalist who, like Payne, simply dominates the stage. An experienced band at the top of their game and a set seeded with some wonderful moments – 'Evergreen' and 'Deep In Borrowdale' were worthy highlights. It later transpired that Alex the drummer played the set with a broken hand! Suffice to say the band carried it off with aplomb to still produce a great set. Splendid stuff in adversity.

Back at SFW the late night party was in full swing with Darth Elvis and The Imperials. Great tongue in cheek stuff as The King rocked the gig with a Star Wars theme. Think of classics like ‘Return To Endor’ and you’ll get the picture. In an evening becoming more surreal by the moment, we saw Jar Jar Binks down the front strutting his stuff. Reality had indeed left the auditorium. Smashing!

Saturday witnessed another great set at HRH Prog – this time from Landskap. With shades of a contemporary Doors sound permeating the show this is a fine young band destined for bigger things.

Set of the day, if not the weekend, was reserved for Steeleye Span. If ever a band illustrated the truism that ‘folk’ music is not fluffy kittens but actually quite dark and, at its very essence, majors on Sex & Death - then Steeleye Span absolutely nail it. Musically as tight as a nut and with Prior in fine form this was absolutely stonking folk-rock of the highest calibre. What a fine live band this crew are. Given the recent passing of Terry Pratchett, the set contained numerous songs from their ‘Wintersmith’ album collaboration with the great man, coupled with old favourites like ‘Thomas the Rhymer’ and ‘Bonny Black Hare’ it simply blew this reviewer away. The audience loved it, with the singalong to ‘All Around My Hat’ lifting the rafters. Marvellous stuff.

Rick Wakeman closed the HRH:Prog bash with his one man show. Now this is as much ‘An Audience With’ as a live music gig. Wakeman is a hugely entertaining old cove and the time spent leaning on the mic like a seventies comedian regaling the crowd with stories of his life was an absolute treasure. A very funny, intelligent man. Every piece of music was led in by a story. Don’t get me wrong. When he hit the Grand Piano this was musicianship of the highest order. Wakeman decanted his orchestral Prog masterpieces down to their acoustic components and illustrated his initial creative process for each piece on the old Joanna. Fascinating and a wonderful finale.

FFA finished the whole shebang back at SFW with some great fire eating disco cabaret at the Interplanetary Division end-of-convention bash. Just as we thought FFA could not be any more out-weirded, we watched the midnight film – a Galaxy Quest Quote-Along. Now this really was Art imitating Life imitating Life imitating Art (you with this?). For those not in the know Galaxy Quest is a very very funny film which does not miss a trick in lampooning the perceived nerdiness of the Sci-Fi convention scene whilst absolutely ripping apart the leaden clichés of Star Trek et al. To sit amongst a wonderfully knowing audience of Jedi’s, Doctor Who’s, Captain Kirk’s, and miscellaneous Super Heroes who did indeed know most of the words, could laugh at themselves and rode all the jokes, will live with this reviewer for a long time. Great people.

So, what started out as reviewing a Prog Festival, and damn fine it was too, developed into our first exposure to the Sci-Fi weekend convention scene. It won’t be the last. HRH Prog / SFW is a winning combo. Heartedly Recommended. 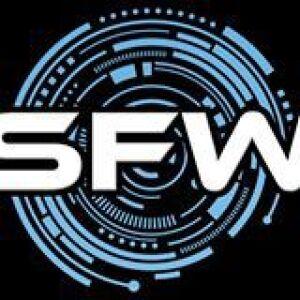 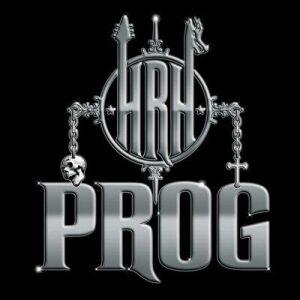