Just a stone’s throw away from the Olympic site, Victoria Park was ready to welcome the hordes of middle aged men wearing their aging black T-shirts. That’s not say the youngsters weren’t around but there must be a ratio of 10-1 in favour of the oldies.

The weather was looking good for the whole weekend, and so were the bands. First up was Hanoi Rocks frontman Michael Monroe and his band. They started off with “trick of the wrist” and the crowd very quickly got into their rhythm and so did the band, playing songs from his extensive back catalogue including “nothin’s alright” from his Demolition 23 days.

Over on the Metal Hammer stage Attica Rage stormed through their set with breakneck speed.

With so much to do throughout the festival site, we managed to get a visit to the one and only Ace Café, and a trip to the beer festival tent where we were treated to a set by Leo’s Garden whilst drinking “Berry Cider” – if there is anything that’s going to make you stumble over your own feet, then this is it!

Back to the main stage for the mighty Queensryche and they didn’t disappoint, Geoff Tate has one of those rock n roll voices that just gets better with age, he also has the ability to get the crowd eating out the palm of his hand. Saving the best to last, “Empire” and “Eyes of a Stranger” were  a very fitting way to end their set.

Thin Lizzy are one of those bands that you can sing-along to all their songs without too much effort, however Saturday was different. The band and the crowd put in a lot of effort  and the results were a pleasure to see and hear. With such an extensive back catalogue, it must have been hard to try and choose 10 songs to please a festival audience, but they managed it, coupled with a special appearance from Michael Monroe on saxophone during “dancing in the moonlight”.  The band took it to the next level with the crowd participation during “whisky in the jar” and “the boys are back in town”. Ending with the brilliant “Black rose” you could see why they are going back out on tour.

Slash was next up and the crowd had swelled to near capacity around the main stage, with a reputation for putting on a greatest hits show the crowd were starting to get restless, but the first chords of “been there lately” soon put the crowd at ease. With Myles Kennedy on vocals, Slash and the band could take to the back of the stage and play their rock n roll.  GnR’s “Nightrain” and “Rocket Queen” quickly followed and the crowd were in full voice. Slash introduced bassist Todd Kerns to sing “Doctor Alibi” which was originally recorded by Lemmy. Todd did a mighty fine job! With the opening riff of “Sweet Child O’Mine” the crowd went crazy and you could feel the earth move below your feet, next up was VR’s “Slither”  which was another ground shaking performance. Myles introduced the final song with “you might know this one” .  “Paradise City” booms from the PA and the crowd were truly happy, it was a shame they didn’t get longer.

Headliners Judas Priest are nearing the end, and this appearance was part of the “Epitaph” tour. A short  history of Judas Priest was offered and the crowd grabbed it with both hands.  “Metal Gods”, “Heading out to the Highway”, “Judas Rising” were on the heavyweight list which was endless but it was over half way through before they got to the “popular classics”. The  first one being “Turbo Lover” which had he crowd whooping in delight, this was quickly followed by “the Green Manalishi (with the two pronged crown)” and “Breaking the Law” the crowd sang this perfectly. It was almost time for the metal gods to say goodbye, but before they did “Painkiller” was played with such meaning that the band and crowd are exhausted, the encore was a welcome break. Coming back with “Electric Eye”, “Hell Bent for Leather” and “You’ve got another thing comin” and the set’s final number “Living after Midnight” Judas Priest truly showed why they have been at the top for so long.

Heaven’s Basement have been around for a while and are now starting to make a name for themselves.  Having been through a line-up change new singer Aaron Buchanan seems to be the final piece of the jigsaw. Playing their way through a short set, it’s apparent that Heaven’s Basement were there to impress the crowd with their hard rock. “Close Encounters” started the set  in blistering style, then dedicating “Leeches” to the people who had tried to take them for a ride in the music business.   The bands were making the statement “don’t mess with us” and on Sundays show the only thing you could do was take notice.  The brilliant “Executioners Day” finished the set with some style.

Saint Jude, have been working very hard through the summer festivals this year and it showed with a very polished performance. Singer Lynne Jackaman has a voice that makes any man stand up and take notice, with her trusty tambourine at her side she managed to conduct the band and the audience with great ease. Playing their rock n blues they had the audience on their toes and their hands clapping at every opportunity. The final two songs of the set, “Soul on Fire” and the sublime “Southern Belles”, the band and audience go their own separate ways knowing that they will meet again.

Throwing in a couple of Scorpions songs “Another Piece of Meat” & “Rock you like a Hurricane” and a couple of UFO songs “Rock Bottom” & “Doctor Doctor” Michael Schenker and his band really knew how to throw a party on a Sunday afternoon.

As the afternoon sun shines on the main stage and the first chords of AC/DC’s “Thunderstruck” come pounding out of the PA, the smoke machines went into overdrive, Thunder are back to rock our world one more time. Starting the set with probably their biggest hit “Backstreet Symphony” the audience went  nuts, with the words being sung by everyone, it was great to have the boys back!  Danny Bowes acknowledged the fact that the crowd were with them and took every opportunity to get them to sing, clap, jump and wave their arms. Crowd pleasers, “River of Pain” and “Higher Ground”  were next and then it was  the Spencer Davis Group classic “Gimme Some Lovin”.   “The Devil Made Me Do It”, “Love Walked in” & “I Love You More Than Rock N Roll” quickly followed, and then for the finale “Dirty Love”.  One question - is this really the end of Thunder? Supposedly not, thank goodness!.

Super group Black Country Communion took  to the stage with a swagger that befits their status.  Glen Hughes has been there and done it, but still gives 110%. Working the crowd with what will one day be classics, BCC did their stuff and even had time for Joe Bonamassa’s “The Ballard of John Hendry” and Deep Purples “Burn”.

With a  heavy heart, I had to leave before Dream Theater, but having witnessed some of the best Rock N Roll acts the planet has to offer made me happy. High Voltage I will see you next year for a bit more of the same please. 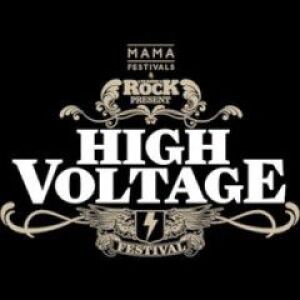