The Great British Folk Festival delivered a first class weekend of quality music and splendid facilities at the Butlins holiday centre in Skegness. The likes of the Levellers, Bob Geldof, Lindisfarne and a host of other quality acts graced the stage with some outstanding performances in an absolutely delightful pre-Xmas weekend break on the Lincolnshire coast.

This reviewer is now increasingly sold on the whole concept of ‘holiday centre’ music weekends. The facilities are indeed excellent; those still thinking the likes of Butlins are so yesterday really do need to wake up and smell the coffee. This is truly a 21st century experience and FFA found Butlins Skegness a wonderful base to enjoy some fine music alongside the wealth of other entertainment and dining options Butlins have to offer.

If you’ve yet to experience a music weekend it’s an absolute delight, offering the best of a festival, a concert, and yes, cabaret all rolled into one. Of course FFA adore the outdoor festival experience, but outside the festival season the increasing number of ‘music weekends’ on the calendar offer the opportunity to more than satisfy that festival fix. The major plus point is that the likes of Butlins offer lots of different accommodation and meal packages to satisfy most budgets. The thought of bypassing the tent and returning to a decent apartment with great facilities after a full day partying is perhaps the biggest draw of all.

The event was understandably a sell-out with around three thousand happy souls creating a lovely atmosphere around the centre. Skeggie offered two large auditoria for the main acts plus a separate Introducing Stage for some excellent new talent. Due to the large size of both of the arenas and managing the numbers moving in-between the two, the stages were in effect two Main Stages in competition rather than a Main Stage and ‘Second Stage’ format. This resulted in the headline acts being evenly distributed across the two stages with identical start times. Sooo…. Each day resulted in some very very tough calls regarding which acts to see. However, at Skeggie the two arena entrances were virtually adjacent so it was easy to flip between the two mid set.

Each large arena was absolutely on the button with decent views and sound, plenty of bars, plus standing and seating areas for those punters into dancing or those lounging around the tables enjoying a ‘rock-cabaret’ experience with a beer or cocktail in hand! Forget the whole ‘redcoats’ thing on stage – this was a true concert experience and the bands reacted accordingly with some outstanding sets. Perhaps our biggest compliment to the acts on offer was that it proved extremely difficult to leave most sets half way through – so we saw a lot and missed a lot. Isn’t life cruel?

Incidentally, Folk is of course a very broad church these days and the festival line-up featured everything from folk and folk-rock though to blues, R&B, Tex-Mex, punk-pop and beyond. Most tastes would be sorted here across all the stages and in the impromptu flash folk sessions popping up in the various bars around the site.

Needless to say, FFA had an absolute ball. It a weekend crammed full of highlights here’s a rundown of some of our highlights. If you were lucky enough to be there you will have your own favourites and preferences – It’s all opinion at the end of the day; this happens to be ours…

Cara Dillon Does Christmas!!! – Dillon kicked off proceedings for FFA on Friday night. The woman has the voice of an angel and, as always, surrounded herself with excellent musicians including husband Sam Lakeman. Promoting her Christmas album, the set, perhaps understandably, was rather heavily Christmas song focussed instead of the polished Celtic ballad world Dillon usually creates. A bit too festive for this reviewer but it was December after all and the sing-along crowd loved it. Ho Ho Ho.

Lindisfarne rolled back the years with an absolutely splendid set. A bit of a greatest hits jamboree, with Rod Clements and the band reminding everyone of just what an influential music force they were. It is just so spooky that Dave Hull-Denholm manages to be his own man whilst sounding uncannily like band founder (and father-in-law) Alan Hull. An emotive 'Run For Home' capped a great hour. Smashing stuff.

An excellent late night set from Los Pacaminos stretched the folk genre with some first class good-time country blues and stomping Tex-Mex. Paul Young was in his element particularly during their self-styled Mexican National Anthem ‘La Bamba’ and the band delivered a buzzing set to close the night,

Saturday afternoon kicked off with Gryphon - another fine example of a refreshingly varied bill. They perform medieval/baroque music with elements of folk, jigs, dances and even some jazz thrown in for good measure. These excellent musicians play complex, intricate tunes together with a delightful degree of mayhem and madness. Using instruments like the oboe, mandolin, violin & crumhorn, they produce rather unique soundscapes. Although featuring some new material, the bulk of the set was taken from their first four albums (they are shortly due to record their first album since the mid-seventies!) Gryphon were superb & the audience loved ‘em. Pity they didn't have an evening spot.

An indication of a great festival is when a new artist appears on your horizon and blows you away – so it went with Liam Blake. A wonderfully cultured and eloquent set from Blake, a young (at least in this company!) singer-songwriter of rare talent with an expressive voice as smooth as silk. FFA were sure we saw tears in the house as Blake talked and sang of Fatherhood. One to watch.

Meanwhile David Knopler & Harry Bogdanovs enthralled an appreciative crowd with some top musicianship over on the Centre Stage. Yet another rousing act for the Skegness faithful.

Blimey Charlie O’Reilly – Bob Geldof! Stunning and arguably set of the festival in this reviewer’s ‘umble opinion. This performance exhibited every facet of the man’s rare talents. He strode across genres like a colossus with a stage presence that leaves most others in his wake. All bases were effortlessly covered; from folk through blues to punk pop and all bound together by that opinionated caustic Geldof wit and social comment. Rather like Billy Bragg, it’s difficult to separate the man from the music and the banter is an integral part of his performance. The poignant and yet amusing positioning speech leading into a brilliant ‘Banana Republic’ defined his homeland’s Troubles to a tee and produced the standout song in a standout set. Wonderful.

Manchester’s finest Travelling Band followed Geldof with some aplomb. This is a cracking band with a fine back-catalogue and yet it was a stunning cover of the Stone Roses ‘Waterfall’ that stole the show. This Manc classic was delivered in a distinctive Travelling Band laid back folkesque stylee that opened up previously unappreciated layers of this classic song. A great set and storming finish. That was Saturday sorted.

Martin Stephenson had the early doors Centre Stage eating from his hands on Sunday. The man simply oozes effortless North East charm and good humour, and the rapport with the crowd was obvious as soon as he hit the stage. Cohorts The Daintees were happy to simply take a back seat and let Stephenson hold court and a produce an hour of top quality music. This is the ‘Boat To Bolivia’ 30th anniversary tour and the reason for the man’s longevity on the music scene is plain for all to see. A genuine crowd pleaser and a great reception.

Some stonking R&B from Slim Chance rocked Reds before a late burst of Ronnie Laine Faces classics ramped the atmosphere up to 11. Another great afternoon set.

Very little in life is ever a certainty but a great Levellers performance is one of life’s little bankers. A festival organisers delight, you just know this band will deliver sheer quality and value for money and Sunday night in Skeggie was no exception. They absolutely ripped it up. For many, the Levellers are one of the best live folk-rock bands around and, naturally, generated the best audience reaction of the whole weekend. Perhaps for devilment, the band upped the ‘rock’ and lowered the ‘folk’ in the ‘folk-rock’ genre and produced a blistering set of power and intensity. With the quality of their back catalogue most of their sets tend to be a greatest hits feast and Skeggie was no exception with the band and crowd in fine voice for classic after classic. Certainly up there vying with Geldof for set of the weekend.

You could almost taste the warmth of the audience towards Donovan. An elder statesman of the folk scene since the early 1960’s, the man is rightly revered in folk circles. There is a tendency to labour overblown celebrity strewn tales between songs but when the man actually picks up his guitar and sings then all is well with the world. A fine set and great audience reaction.

Holy Moly & The Crackers closed off the whole shebang for FFA with another excellent set in a consistently good festival. Some soulful R&B in a delightfully mixed bag of genres with the absolute highlight being a wonderfully bluesy version of ‘Cocaine Lil’. These guys have a quality vaudeville aura ideal for late night shows and they pretty much nailed it at Skeggie.

So there you go. The Great British Folk Festival – a superb weekend of great music, great audiences, and civilised festival going. No wonder these weekends sell out so quickly. It was an absolute peach of an event. 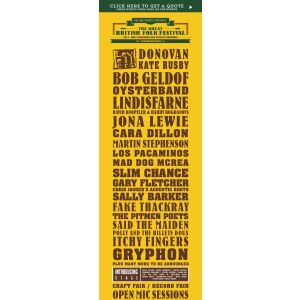