Glastonbudget 2016 Review
So much more than 'just' tribute bands
Tweet

Mention the words “Tribute band” and many people will visualise dodgy wigs, karaoke grade singing and a keen fan band that can’t quite hit the right notes. If there is anything that could change this view, maybe Europe’s biggest tribute band festival could shine a new light on those that pay homage to their idols. 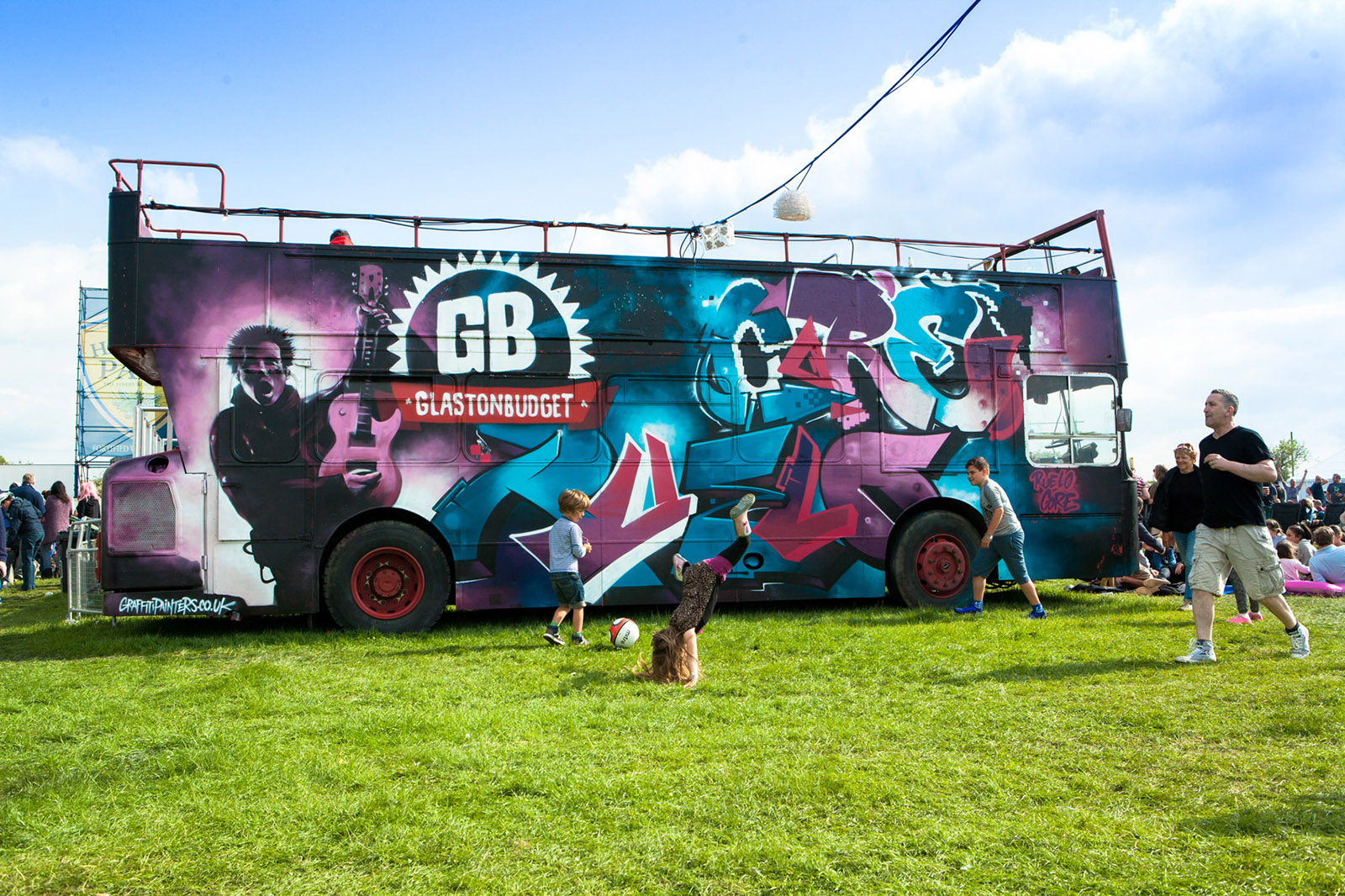 Situated between Leicester, Melton Mowbray and Loughborough, is the sleepy village of Wymeswold. Every Whitsun bank holiday weekend since 2005, tens of thousands festival go-ers travel to the area to attend Glastonbudget Festival. 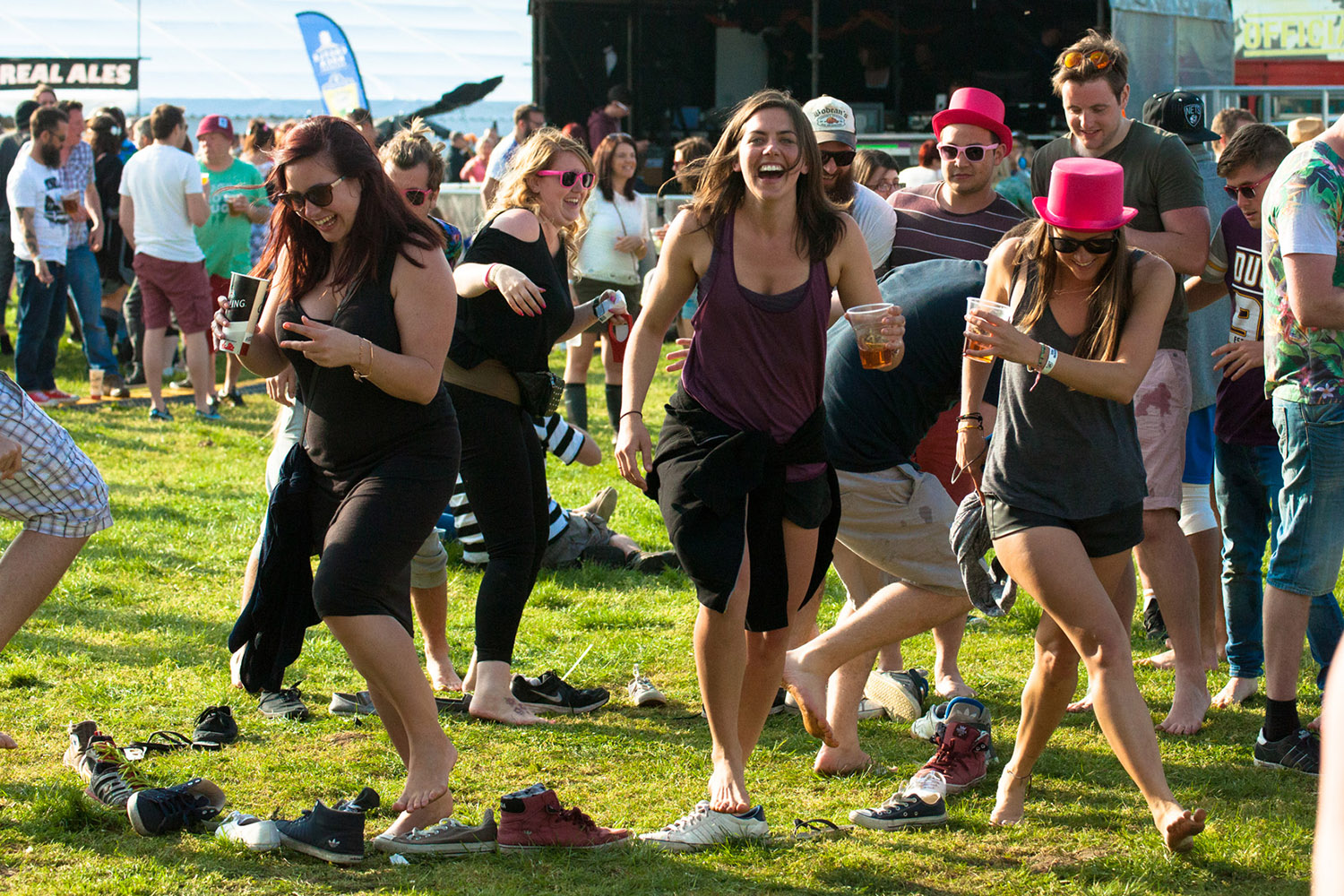 Although the main stage features the best tribute bands the UK and Europe can offer, Glastonbudget also features many other stages for up and coming bands and artists, featuring hundreds of bands over the weekend. The ethos behind the event is to deliver quality entertainment on an affordable budget, and this includes the range of food and drinks available over the weekend. Whatever your taste buds require, there is plenty on offer including Indian, Thai, Mexican and Italian food, plus the regular hot dogs and burgers. All food and drink is cheaper than many festivals and events of a similar size.

Friday has grown each year at Glastonbudget, and this year was no exception. Big performances by festival stalwarts Oasish and MJ UK gave the crowds a taste of the quality of what would be delivered over the weekend. The evening continued with Stereotonics and The Clone Roses, before festival goers had to make the decision between Absolute Bowie or Prodigy tribute band called Jilted Generation. 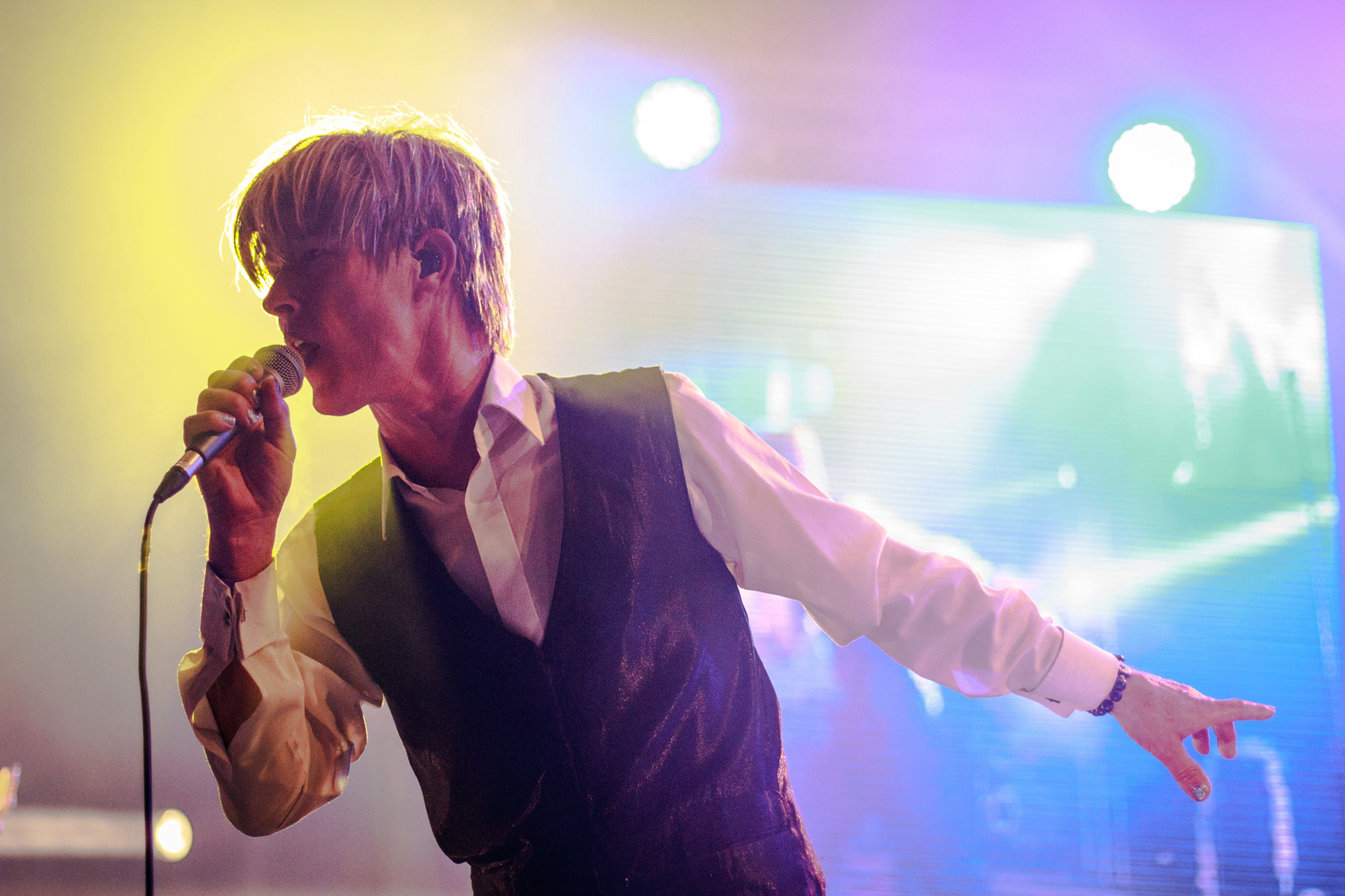 Photographing the event, I darted between the two performances, and was blown away by the quality to detail by Absolute Bowie. Their website has the quote “As close to the real thing as you’ll get” by Mick “Woody” Woodmansey, Bowie’s drummer from his backing band The Spiders from Mars. The band obviously prides their selves in portraying the different personas of Bowie, with costume changes and mannerisms echoing the traits of the star that passed away earlier this year. 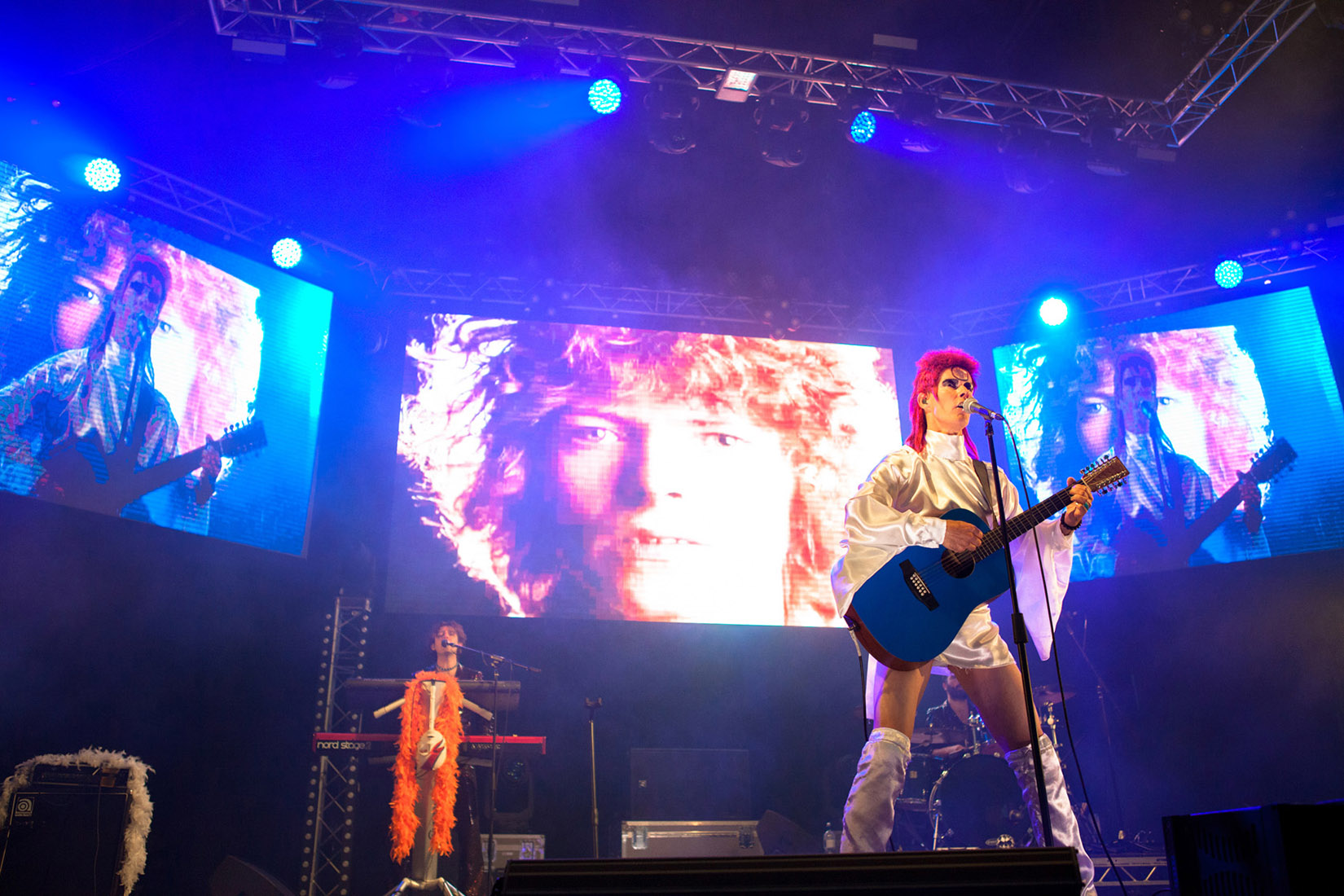 In the sunshine on Saturday, the crowds were out early afternoon for Abba Revival and Money For Nothing. In the large, wedding marque style VIP area, I had the chance to catch up with festival organiser Nick Tanner on Saturday afternoon.

After some conversation about how some of the selection process of bands must be like Britain’s Got Talent, but without the buzzers, Nick sheds light on the time involved behind the scenes at Glastonbudget:

“The planning and organizing starts from early August, auditioning 5 bands a night, twice a week for the various stages we have. That goes on until December, and if we don’t have the quantity or quality, we continue the process until March.” On what is a full time job for Nick, he gave further information on how the site of the festival is the home of Glastonbudget, and hopefully will never have to move from there. Seeing the festival grow from a few hundred in the crowd back in 2005, to over 10,000 over the weekend ten years later, must be considered as a huge achievement for something that started as “a conversation in my pub”. 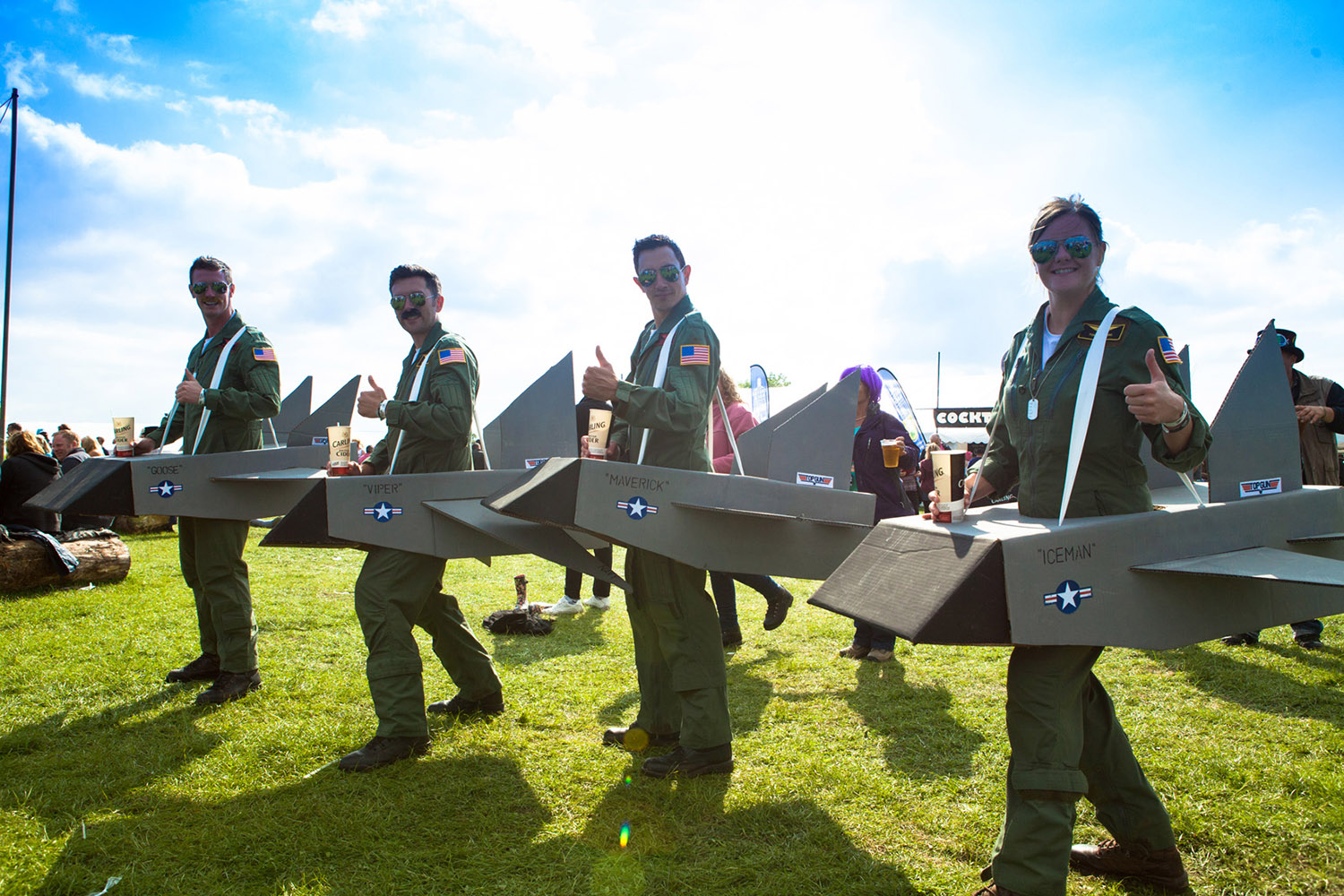 Following our conversation, it was time to go to the Big Top, to watch Goldie Looking Chain. No, not a tribute band here, this was the actual comedic group from South Wales that shot to brief frame in the Noughties, with their explicit song lyrics. Glastonbudget have at least one guest artist each year, which has included Toyah Wilcox, Chesney Hawkes, and Buster Bloodvessel. Saturday went on to include Guns 2 Roses, Us4//U2 and Totally Tina. The tribute for Tina Turner could really be part of a West End show, with professional dancers, full live band and lead singer that before the choice of Gordon Davis as Elvis, or The Hot Red Chili Peppers. Going between the stages to review and photograph both of the evening headliners, again I was blown away by the quality of Gordon Davis in his homage to the King. 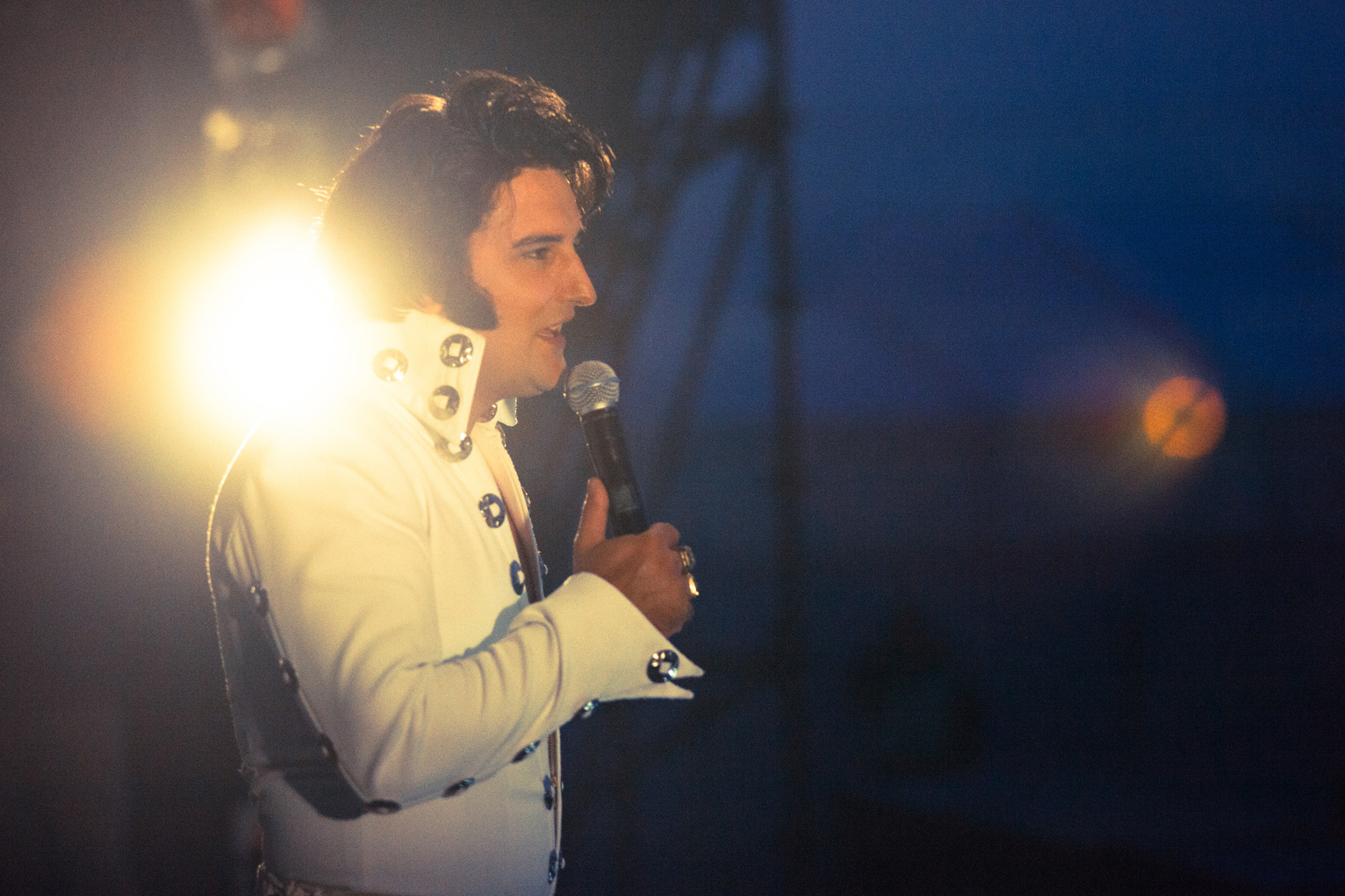 Sunday for many at a festival can be painful, and I think this is where the Glastonbudget organisers planned the right remedies for the sore heads – hair of the dog while listening to P!nk and Mike Andrew as Robbie Williams. Mike Andrew’s website includes the quote by Robbie Williams “I don’t know where he starts and I end…”, with Williams dad also saying Mike Andrew is “the nearest thing to the real thing”. The afternoon built up from pop to rock, with the options starting with Green Date, another tribute band “endorsed” by the actual band. Their set list ranged from the more recent album Tre!, back to the early 90’s Dookie, with fan favourite Basket Case enticing the crowd. 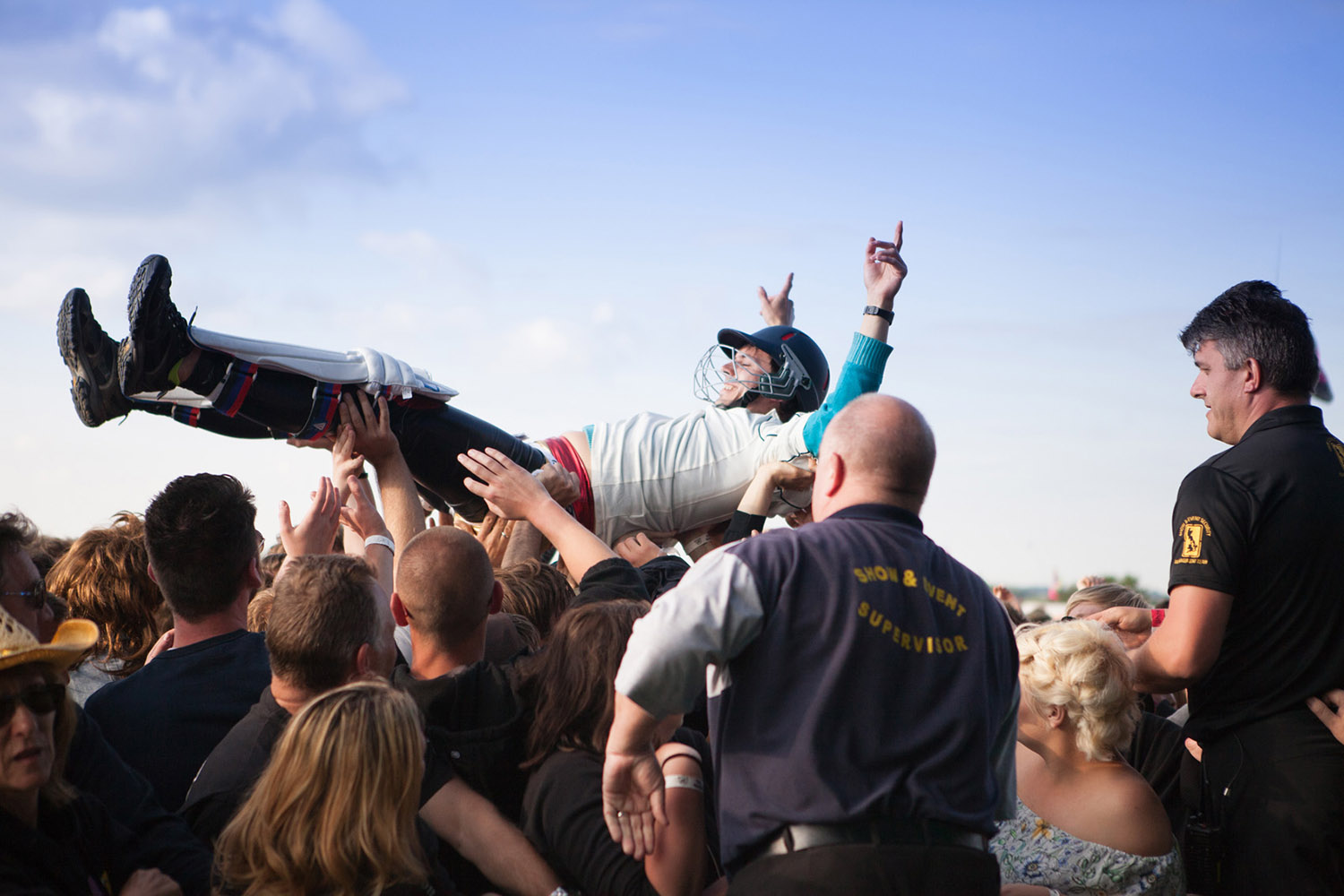 The guitars and drums continued as the sun began to fade with Not The Rolling Stones, Dizzy Lizzy and penultimate performance by Four Fighters. Headlining the Big Top on Sunday were The Fillers, while Glastonbudget regulars Mercury delivered a fantastic show to the thousands in the crowd. The Queen tribute band epitomised the professionalism of many of the tribute bands featured over the weekend. Closing the set, and the festival, with We Are The Champions followed by crown and gown as the national anthem echoed around the festival, many sang their hearts out as if they were at the famous Queen shows at Wembley decades before. 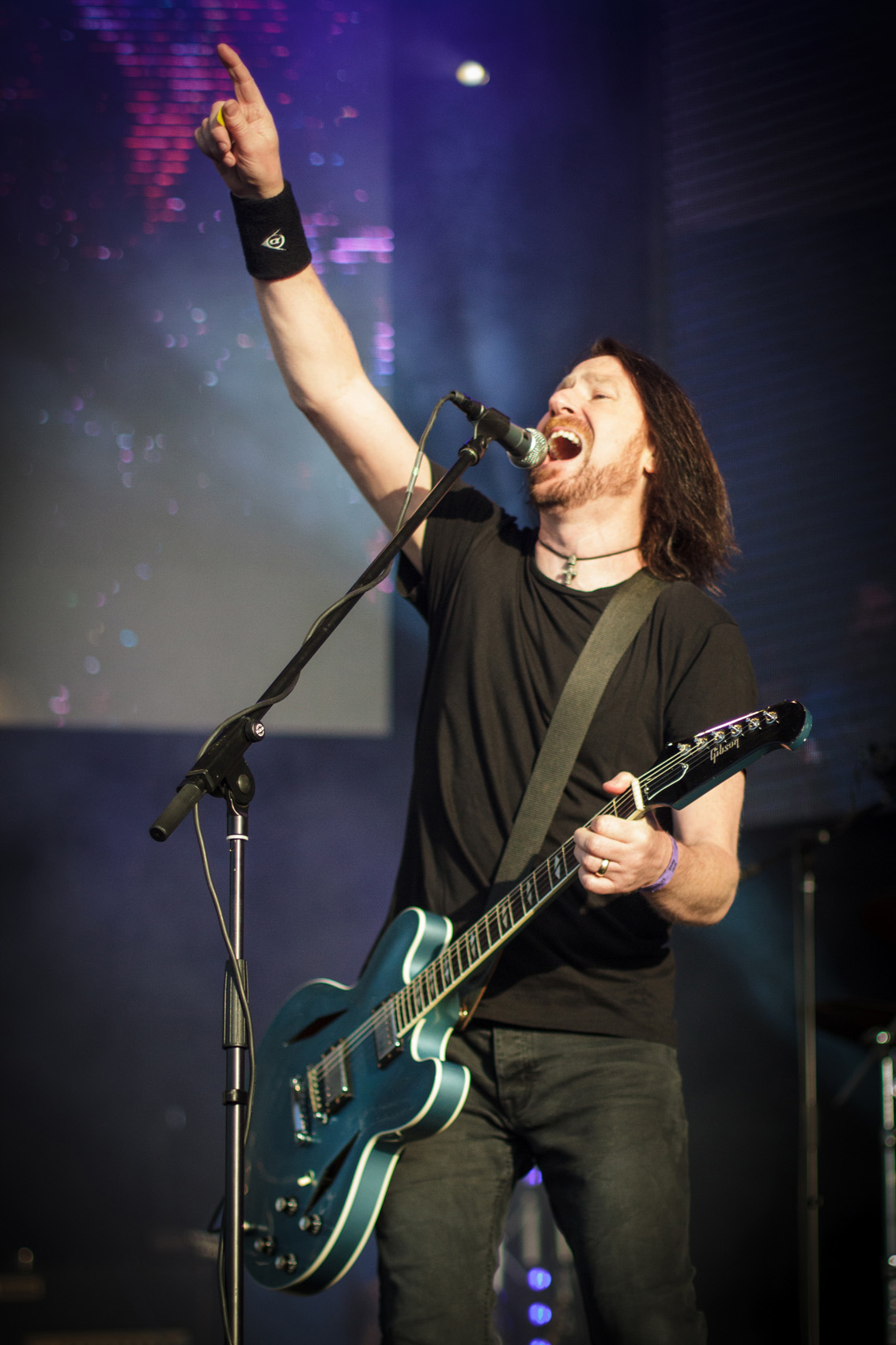 If you are a hardcore fan of any of the bands and artists on the line up, it would definitely be worth your while to enjoy the West End show quality performances delivered by many of the bigger tribute bands. Read any of the tribute band websites, and there will be evidence of testimonials about playing for high profile musicians. Aside from the usual festival regulars being at the front of the pit, there is a “party in the park” approach taken by many, with chairs and blankets out in the field to enjoy the music in the same comfortable spot in the sunshine. The festival has also appeared on The Gadget Show, has been championed by Radio 2 DJ Chris Evans, and will also appear on The One Show soon.

Throughout the various conversations over the weekend I had with attendees, band members and organisers’, the over arching feeling to Glastonbudget is that it is a friendly, family orientated festival where the police officers’ patrolling the site will high-five you as they walk through the crowd.

Check out the Glastonbudget 2016 Gallery 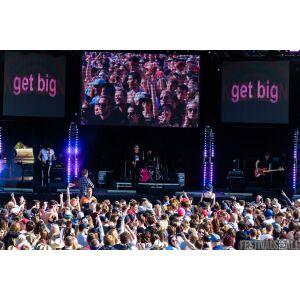