Once again, we all meet up in the usually sleepy village of Cropredy for a bit of a get together organised by those awfully nice people Fairport Convention.

As festivals go, Cropredy continues to be one of the most popular folk/world music events on the scene, and every year seems to pull out a line-up to cater not only for the traditionalists, but also for the widening younger and young at heart crowd. On paper this year it is no exception with bands from the prog, gypsy punk, and rock genres alongside the folk bands. 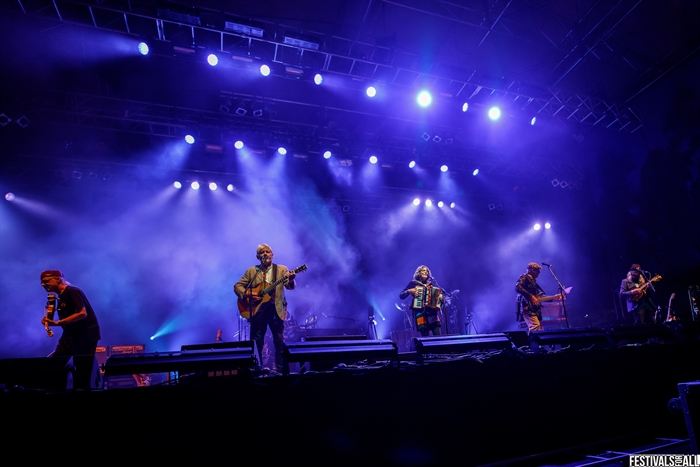 So, what do we get... The main festival is one stage, one bar and one field with no running around to cram in the bands. In the village they have the ever-popular fringe festival, and in later years they have been running a field 8 fringe stage, so overall plenty to see and do. Some feel this is diluting the main festival. I’m torn between liking how the festival was; which is what pulled us in all those years ago, and the expansion of the fringe festival - that offers a wider experience and brings more of Cropredy village into the festival. Only time will tell. 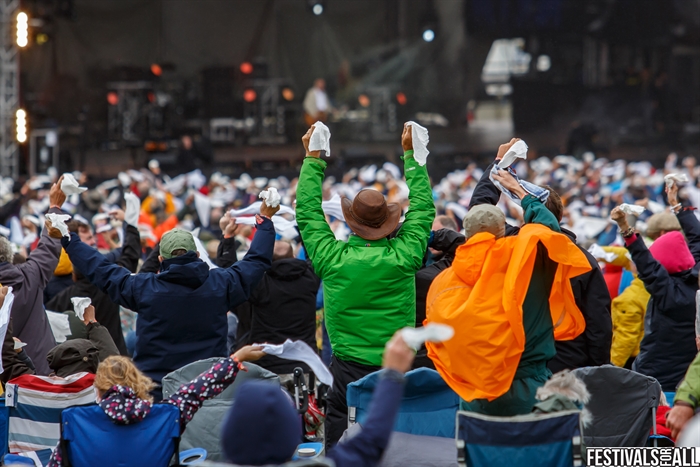 With many people arriving early Thursday and enjoying the sunny weather, they were already in fine spirits when the stage opened, and were treated to one of Cropredy’s beautiful moments. Compere Anthony John Clarke introduced a nervous Georgia Lucas, Sandy Denny’s daughter, onto the stage to the delight of the crowd, and he read out a poem penned by Georgia about Sandy, … now that’s how you start a festival.

After a short acoustic set from Fairport, on comes Lil Jim who quips he picked the wrong day to be a Goth, as he pumped out the Cajun tunes on his trusty accordion. With family heritage back to R-Cajun, the music is in his blood, and he entertains the crowd with stories and tunes including the odd Black Sabbath cover amongst others. 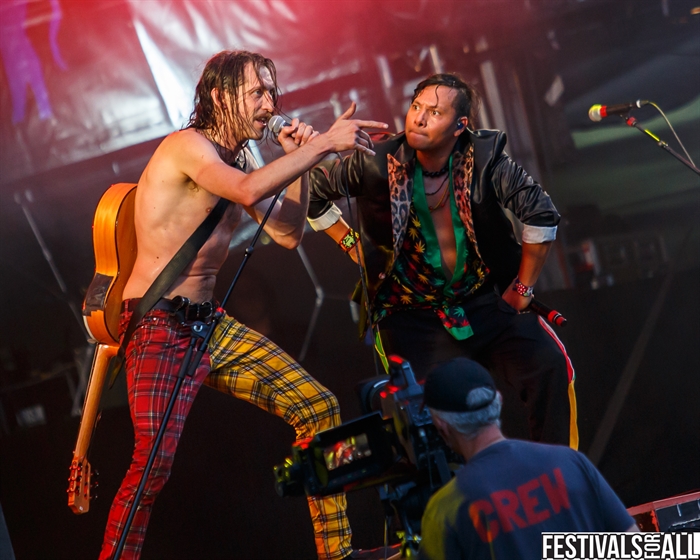 As I would come to find over the festival, several of the earlier bands didn’t really hit the spot with me, although they did get some decent crowd reaction, they seemed to miss the spark, at the same time, others really played the stage and engaged with the crowd. The Tors unfortunately fell into the category of not quite hitting the spot despite having a family link back to Burt Weedon. Even though I had seen Gogol Bordello before, they are one of bands that you are just not sure what is going to happen. High tempo Gypsy folk led by a charismatic Eugene Hutz, and I think the best way to describe them is ‘controlled chaos!’ He threw more red wine round the stage than he drank. The sort of band that you just have to dance to and enjoy. 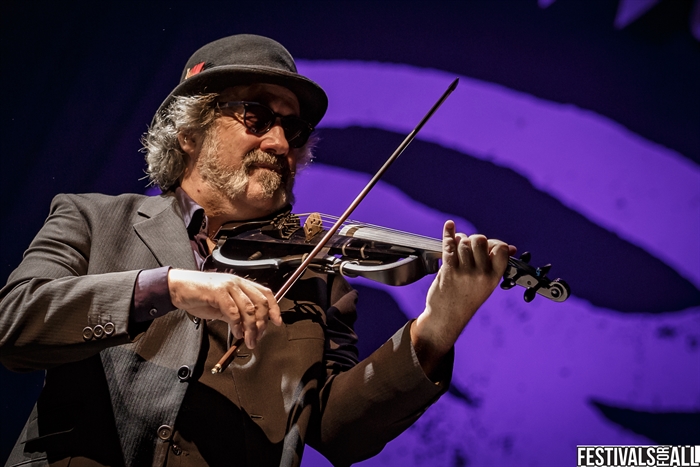 The Waterboys delivered possibly one of the best headlines sets I’ve seen at Cropredy for a few years, a tight and polished performance, yet still full of life and feeling. Hypnotic fiddle playing, hammering keyboard solos, alongside the distinctive vocals and guitar style of Mike Scott. ‘Nashville, Tennessee’ stood out for me, but the old hits got the crowd going to end the night on a high - and they even managed an encore of ‘Jumping Jack Flash’.

Come Friday morning and the sun had been replaced by some rather inclement weather; however this did not dampen the spirits of the Fairporter’s, who are used to this, and well, just got on with it. The 4 of Us had a hard set to play, but managed to pull it off well with their cheeky Irish charm and some fine tunes. 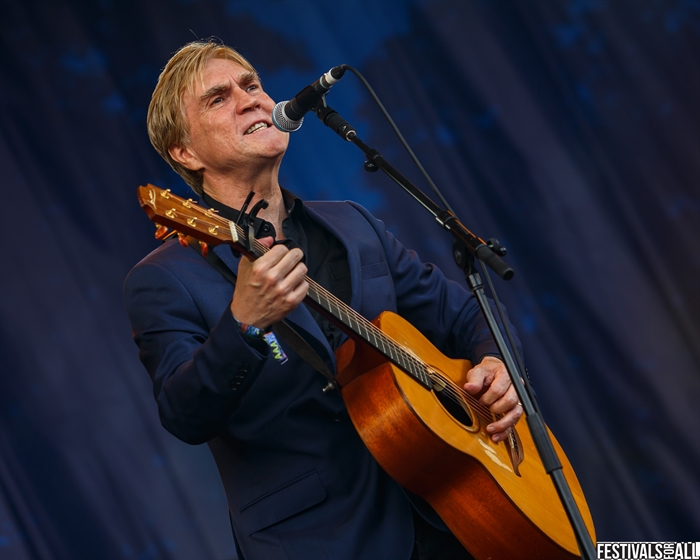 Having seen Wildwood Kin a few years ago I was looking forward to them, but for me there was something lacking, maybe it was the stage - as they all seemed to stand at opposite corners, but they didn’t have the same impact as they did last time. This was the same for Will Pound and Eddy Jay who were on earlier, sometimes the big stage just doesn’t suit the band and they fail to engage the audience. In comparison, Wilson and Wakeman grabbed the crowd, which was quite ironic as a few years ago in Headspace they didn’t go down too well… but today the dynamic between them and the crowd was electric. Damian even ended up amongst the crowd for a while and they pulled off an amazing version of Bowie’s ‘Life on Mars’. 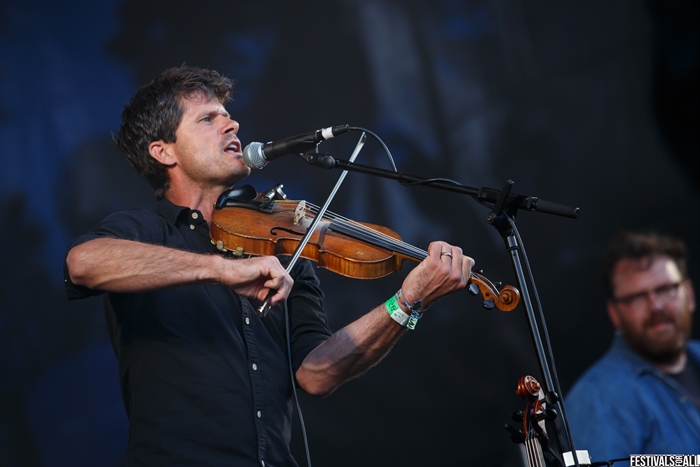 Caravan got over some technical difficulties to give us a great set, as did Seth Lakeman, I missed most of their sets though to take in some of the delights on the main field and the fringe stages. Friday night really had two headliners’, both were well supported and totally different. The more folky side were treated to an outstanding set from Richard Thompson who took us through a great acoustic session that included ‘1952 Vincent Black Lightning’ , before he was joined by friends that included Simon Nicol and Dave Pegg. For me I always prefer the acoustic side of his performance - which also proved the case tonight. 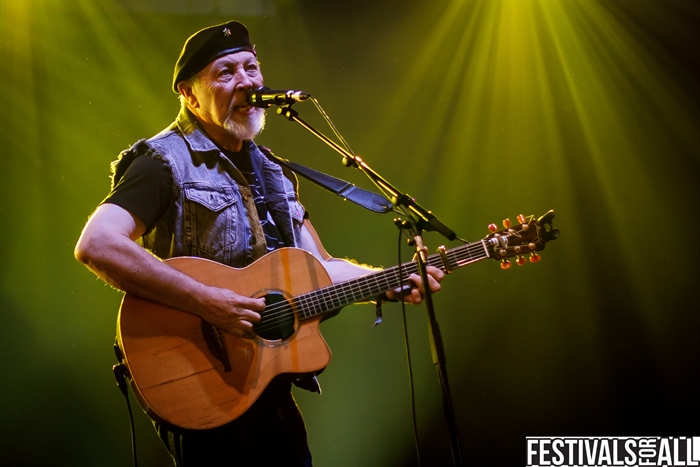 Following on, and bringing the night to an end, was one of the bands that would split the crowd. Those that left after RT missed an exceptional set by Frank Turner, whose sound seems to be able to bridge the genres and is equally as happy at the likes of Bestival, or in front of a folky crowd as tonight. He mentioned that at least he didn’t have to explain the instruments to a folk crowd! Full of energy, he had the crowd on their feet in the pouring rain. He did skip his usual crowd surf, maybe the average age of the punters had something to do with this! 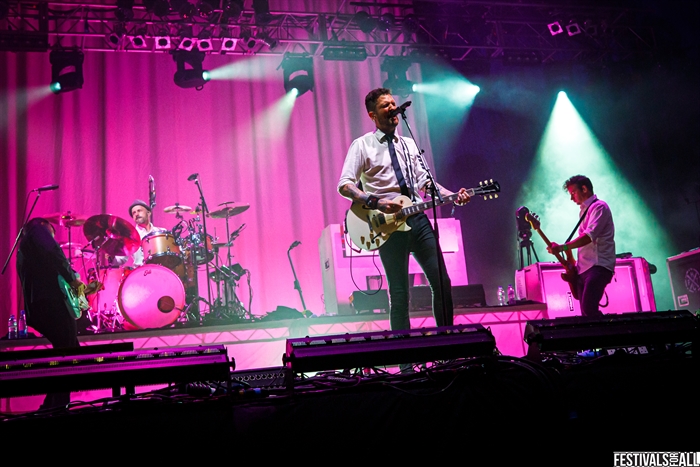 Saturday morning and the traditional set from Richard Digance, good or bad, the jury is out - but it’s all part of what makes Cropredy - including the mass Morris Dance and hanky waving. The jury however was definite in support of Daphne’ Flights, five accomplished vocalists, Melanie Harrold, Helen Watson, Christine Collister, Julie Matthews and Chris While. I have seen most of them individually, but not together, and what a tour-de-force they were. 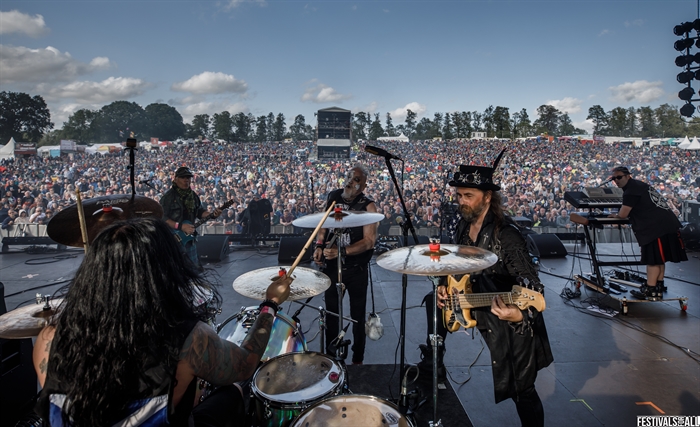 After an outstanding set at The Brasenose last year, Zal Cleminson’s /sin’dogs/ had a main stage slot, and for some were one of the more controversial acts over the weekend. Personally, for me they were one of my best of the weekend. More on the heavier side than norma,l but no more than others that have played in past years. Highlight from the band was a superb version of ‘The Faith Healer’, and the cheers at the end showed there is nothing wrong with a bit of controversy! 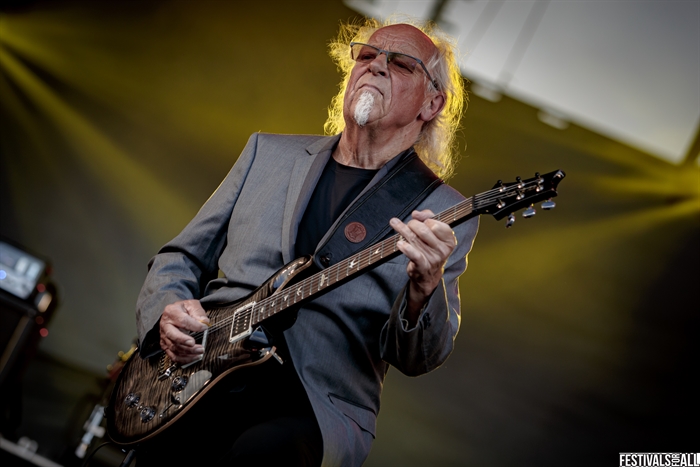 Not many bands achieve 50 years of playing, Fairport did a few years ago, as did Jethro Tull. Martin Barre, who played with Tull from 1968-2012, is currently touring with his band and performing 50 years of their music - and to get all that into an hour set is quite an achievement. Joining him on this occasion was original drummer Clive Bunker and Dee Palmer on keyboards. I’m not familiar with some of the more obscure tracks but really enjoyed the classics that I know, ‘Aqualung’, ‘War Child’, ‘Songs from the Wood’ etc and the collaborations with the original members worked very well.

It was left for Martin Simpson to lead us into the Fairport set. It’s the graveyard set and notoriously difficult to play, but this guitar virtuoso managed to pull it off with some precise and engaging songs, ‘Blind Wille McTell’ and ‘St James Hospital’ were particular faves. 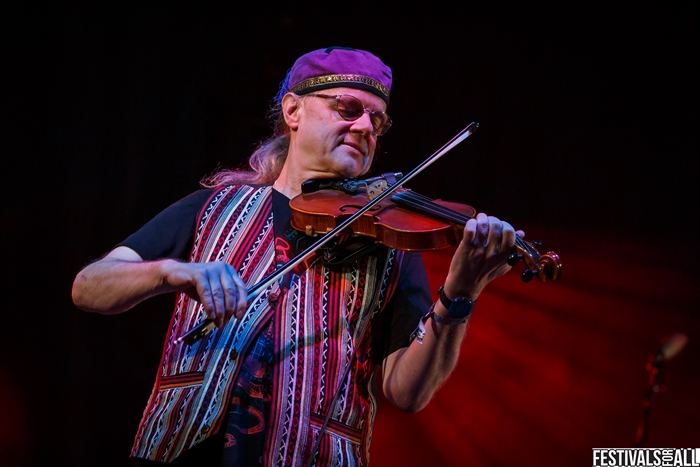 The final session of the weekend as ever falls to Fairport Convention and Friends which this year included Joe Brown, Sally Barker and PJ Harvey amongst others. Midway through, the band took a break and Maartin Allcock’a wife Jan, who after reading a short piece, led us into a video tribute made from photos over the years, with a background of music laid down by Maart. Very fitting and emotional for everyone, and the moon shining bright over the stage was surreal - it was like Maart was giving a nod to the proceedings.  Fairport and the crowd bought the night and the festival to an end with MOTL, one of the finest traditions that really encapsulates the spirit of Cropredy. 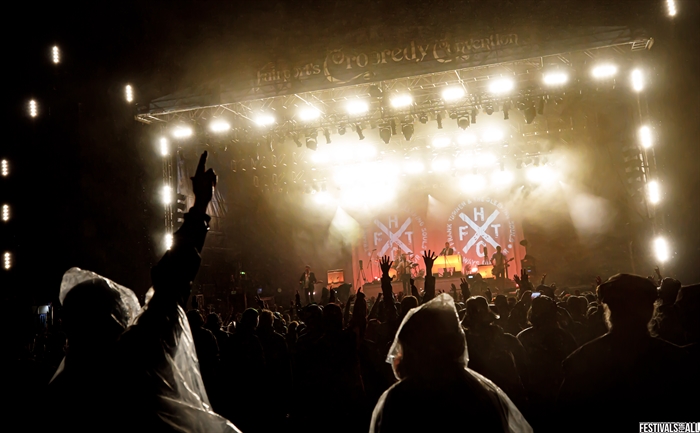 Reflecting on the festival… and yet again it was a success, the festival team pulled together and through their hard work and commitment the show went on. Sure, you can’t please all the people all the time, but I think everyone will take away plenty of happy memories from this year, and I’m certainly looking forward to what they have planned for us next year.

Article and Photograhy by Simon Dunkerley 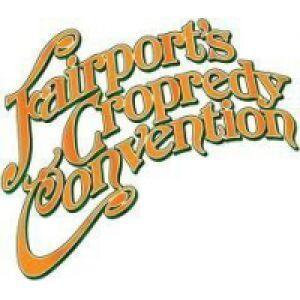 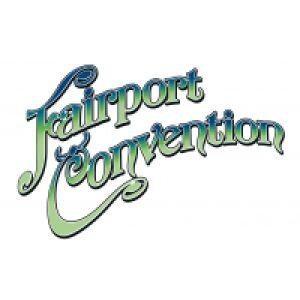