Evolution Festival two Festivals for the price of one
Tweet

Evolution Festival in Newcastle Gateshead Quayside the 28-29th May.

Evolution, an urban festival in the heart of Newcastle/Gateshead took place in the last weekend of May its line up covering a cross-section of musical genres, ensuring that there really was something for everyone.

The layout of Evolution, got festival goers on their feet as they hopped from one side of the Tyne to the other, from the main ‘Spillers’ stage, across to the ‘Baltic’ and back to the ‘introducing’. This Urban side of the festival was largely dominated by sprightly twenty-something’s listening to the likes of Plan B, Tinie Tempah, Example, Caribou plus more.

Tucked away from this central urban location was the ‘Ballast Hills Stage’, a grassy utopia, with tasty treats, seating areas, queue-free toilets, and a covered stage to provide shelter from the storm.  Nutritious and delicious snacks included fresh stone baked pizzas, and wild boar or kangaroo burgers. Other surprises included a massage tent, the sale of hemp and almond milk, and an extensive choice of ales, ciders, and cocktails as opposed to the average festivals ‘Carlsberg or Strongbow’.

While the weather couldn’t settle on its mood for the day, the festival goers certainly maintained a cheerful atmosphere and unsurprisingly so considering the bargain ticket price of £35 for the weekend, including a full listing of the line-up.

On the Saturday Hercules and the Love Affair blew us away with their live set, polished to perfection and including tracks from their new album including ‘Hello’ and their big hit ‘Blind’. The band seemed to thrive on entertaining the crowd so we advise you check out them out at another of this summers festival appearances: Jamie Woon another highlight of the weekend, (particularly as we got to meet him for a quick chat), playing songs from his current album ‘MirrorWriting’. We’ll be sharing that interview soon.

Loving the festival utopia that was the ‘Ballast Hill Stage’ we opted to watch Billy Bragg as the head line act. As ever he performed his well crafted songs with clever lyrics and political muses. He pulled in a great crowd and even performed a request (after taking the time to remember the lyrics…chords…and keys)! He finished his set with the ever popular ‘New England’ with the additional Kirsty McColl verses.

On the Sunday Example pulled in a huge crowd and had everyone singing and dancing along. He certainly knew how to get everyone on their feet and thanked the weather as the sun shone down on Gateshead!click here to read our interview with example at Evolution.

We also managed to catch a glimpse of Tinie Tempah, who whipped the crowd into a frenzy with his hit ‘Pass Out’, the bass line vibrating through both crowd and concrete!

To finish the day we went back to our favourite stage (I think you can guess which by now) to check out Bellowhead. Having seen their name appear on numerous festival line-ups we thought they must be worth a listen and couldn’t have been more right! Bellowhead are an eleven piece band who have recently scooped BBC Folks ‘Best Live Band’ award, their lyrics describing tales of alcohol and prostitution! The band drew in a real cross-section of society and the audience loved every minute.

So all in all the weekend was a huge success, with special mentions going to the free festival line-ups (rather than a pricey programme or lanyard), the hard work of the litter pickers to keep Newcastle looking pristine, and ‘Generators’ project on the introducing stage which provided 11-24 year olds with the opportunity to take free music training on an intensive week long course www.generator.org.uk/umt.

Thank you Evolution for inviting us along for our cultural journey in the North. 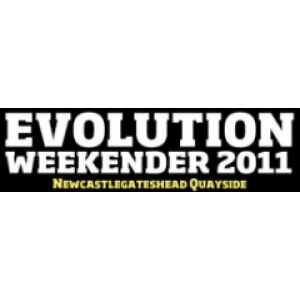