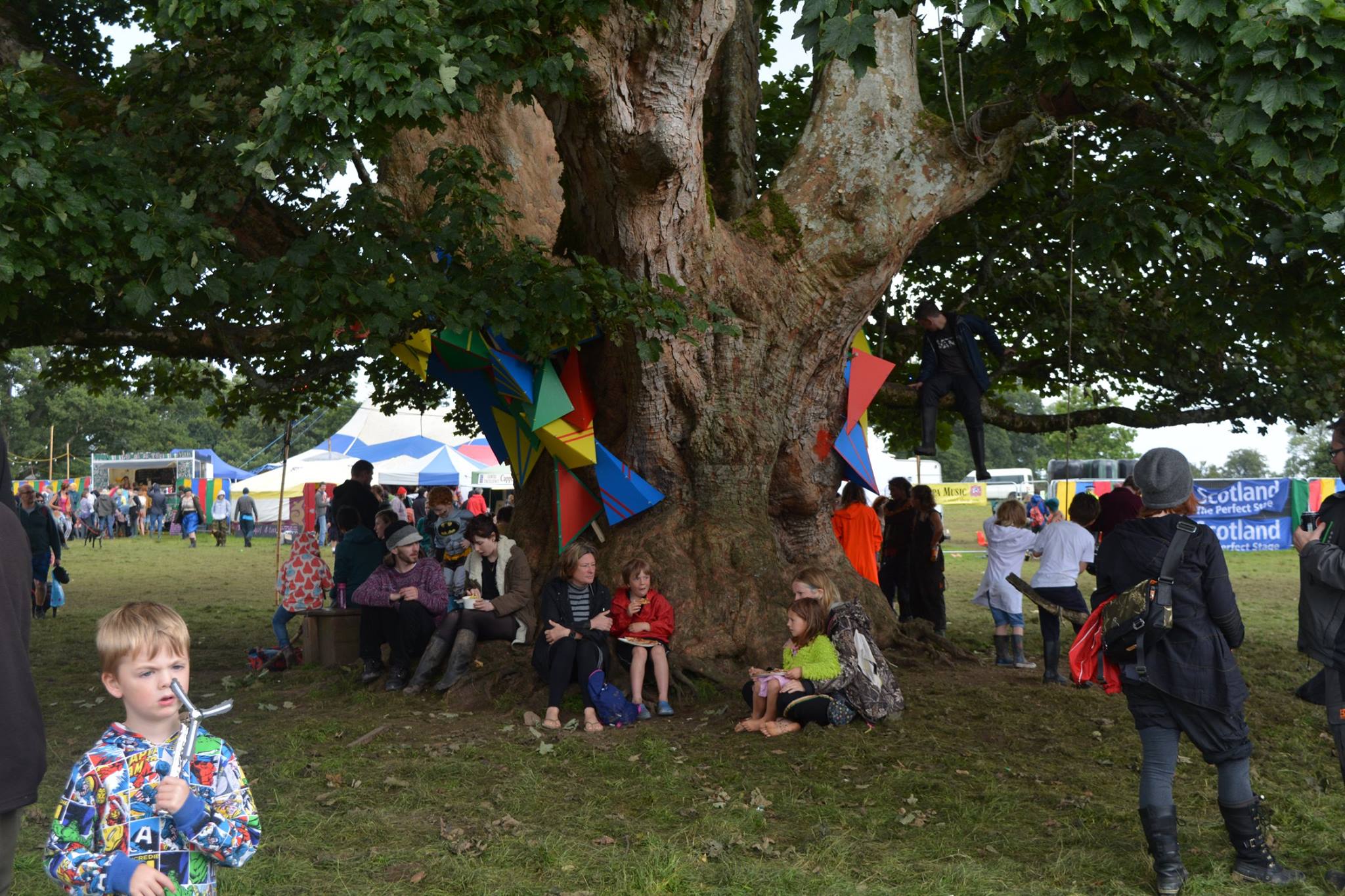 Nestled in the stunning grounds of the Cardross Estate in the port of Mentieth is a very intimate quaint little festival called Doune the Rabbit Hole. With five stage areas and plenty of funky bars, the festival makes the most of the space it is packed into. Weaved around three stunning trees and a beautiful view in every direction, you feel part of the family enjoying a colourful fete in the countryside. You can even bring your dog. But beware, something strange happens doune the hole, where the weather is warped, the rain falls sideways and time goes all squiffy. 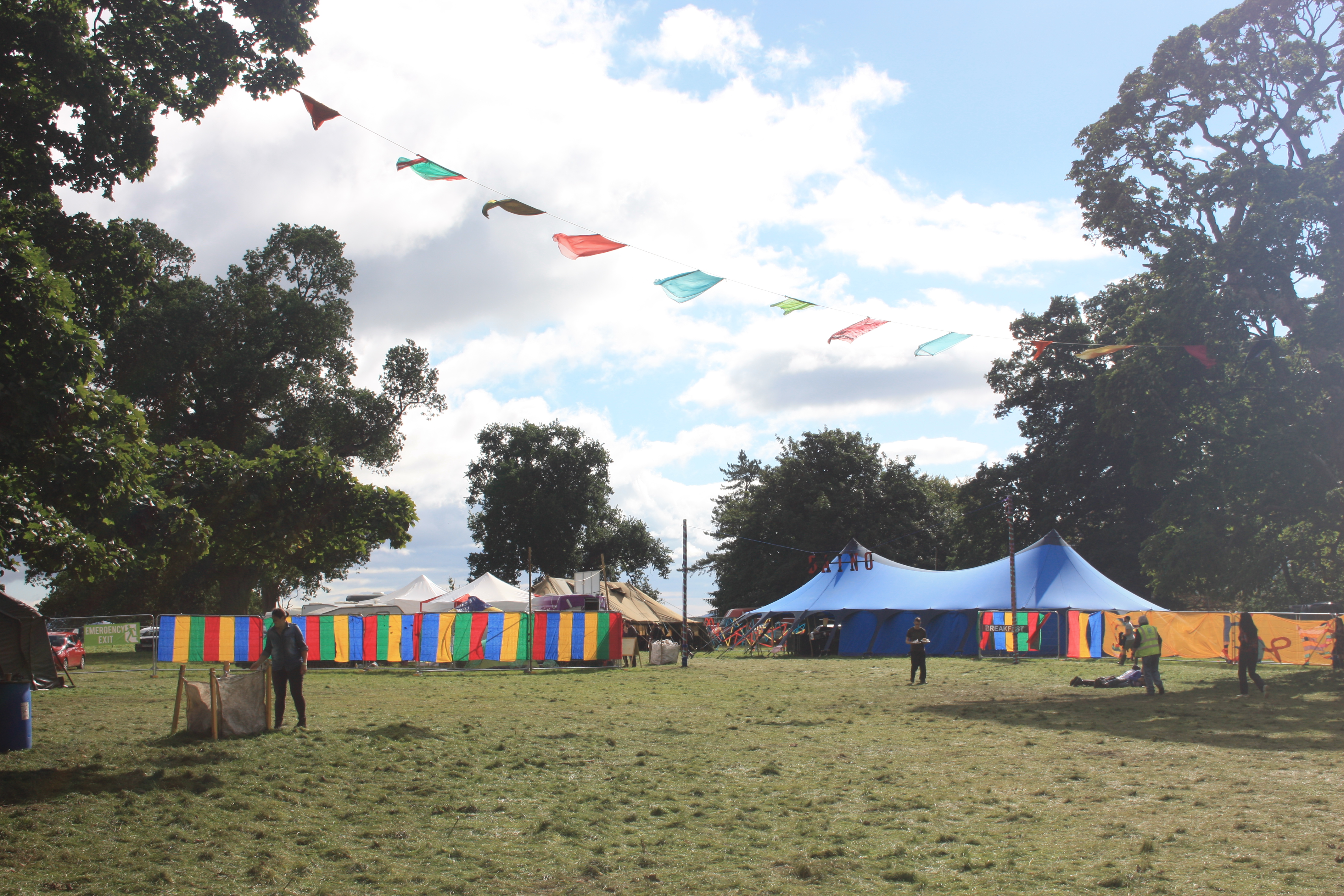 The site is set up well, with friendly welcoming stewards, good organisation of the live-in camping fields and plenty of large wild spaces to camp. From our end of row spot in the campervan field we watched hundreds of families enjoying the outside, the trees and the sunny spells in between the Scottish dreek (means damp drizzle with frequent changes to down pour and back again.) Although the festival was wet and the weather miserable, the site held up well and everyone we spoke to was enjoying the shelter from either under the trees or inside one of the many bars. Our favourite bar being the comfortably seated around barrels Whistle Blower bar. 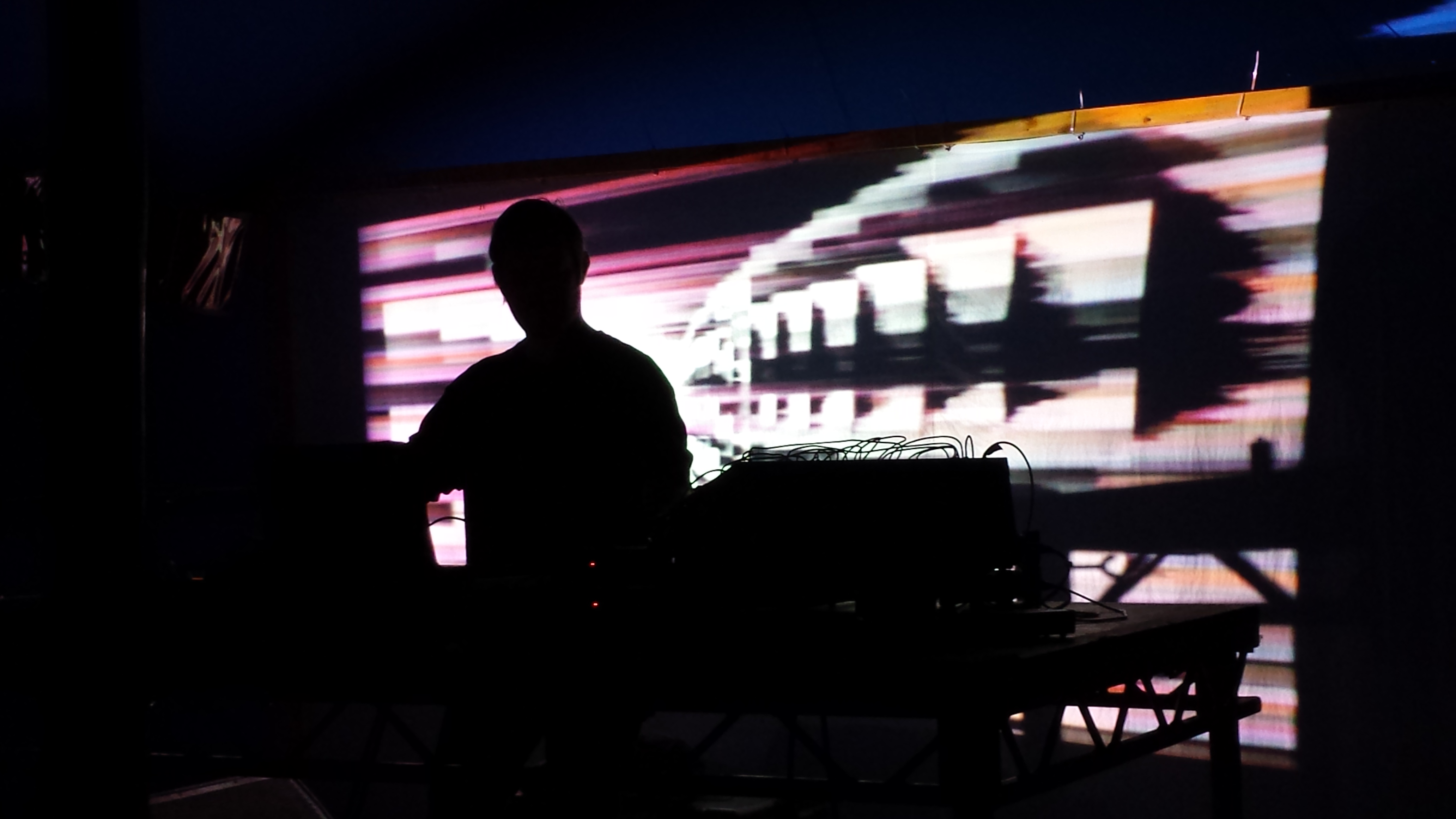 So family friendly is this festival both in size and amusements the place was covered in children, push chairs and of course dogs. In between the unkind continual showers of rain you could watch the vast and eclectic range of children’s activities in the Kids area. Especially at Jenny’s where the kids were playing with circus equipment and bouncing around on Space Hoppers . You could squeeze in amongst the steaming crowds and listen to the sounds drifting out of the many big top tents.

Hiding from the weather inside the bars became the order of the day on Friday. We met a whole lot of returning Rabbit Holers and first time Rabbit Holer’s, just like us. Such a shame that the weather kept dampening the longevity of people’s staying power. However, the conversations were flowing along with the delicious selection of ales and lagers on sale. 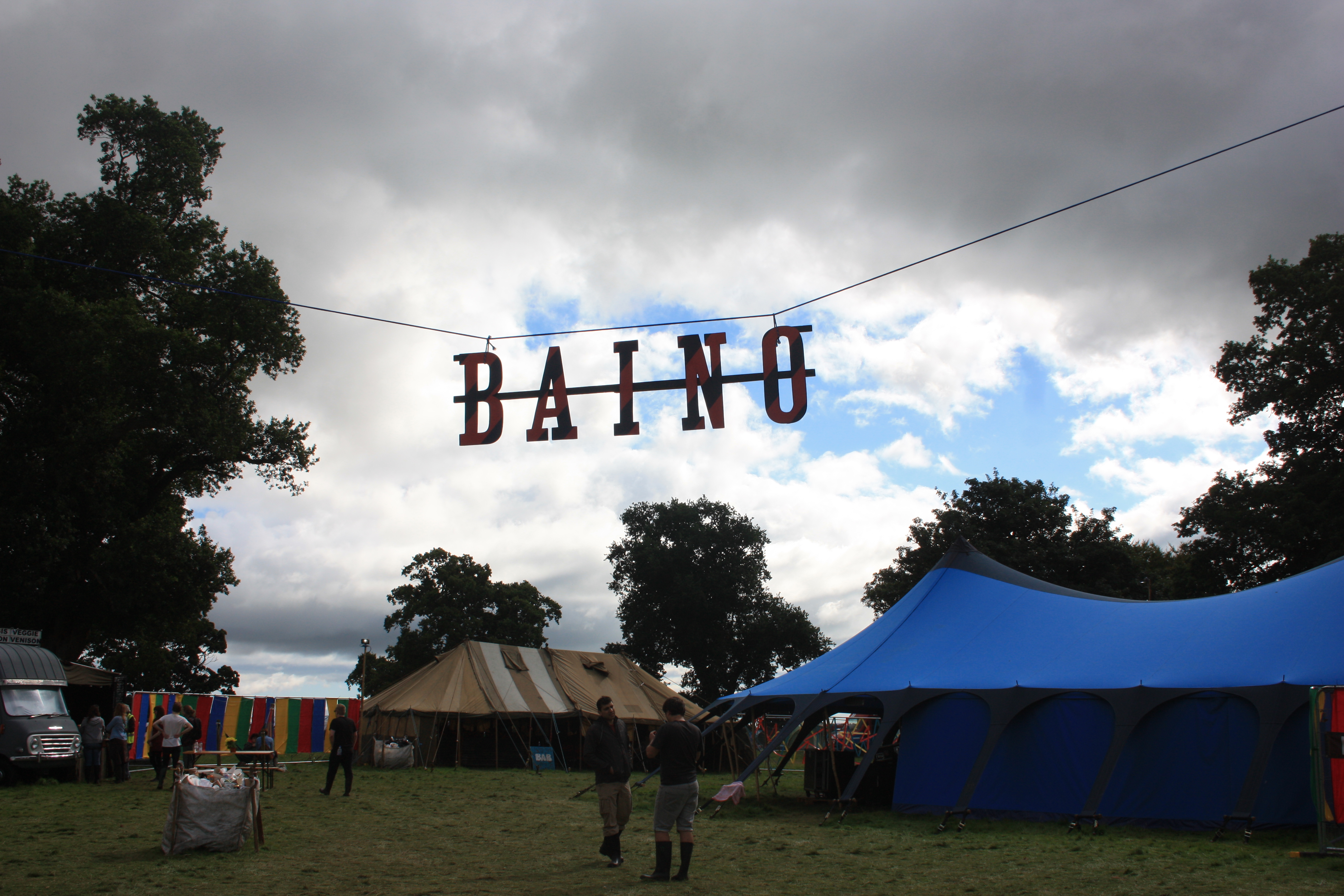 We dived into the Baino tent and listened to a band we think were called the Trembling Bells. It was an unusual sound, twisted up of folk, jazz and rock. An almost schizophrenic dramatic and theatrical Scottish folk cross rock sound that had the crowd entranced, even the children.

We then hot footed it through the rain and through the crowds of families to listen front stage to the second half of an energetic set by a band called the Strange Blue Dreams.

An incredible foot tapping sound bought to you from a huge double bass, mandolin, guitar and strings, with three point harmonies thrown in for good measure. We enjoyed their skiffle gypsy style. 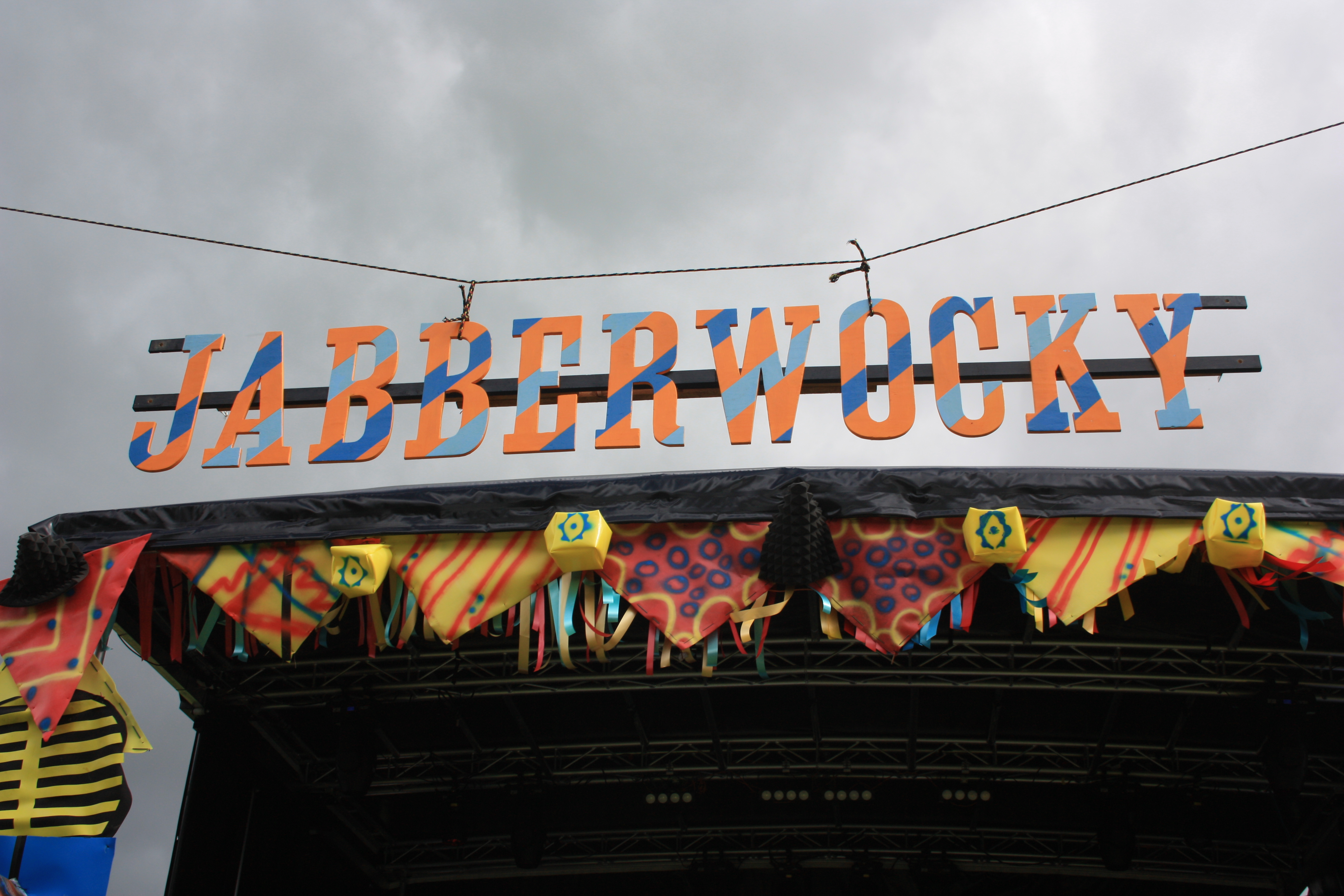 As they finished the rain had thankfully stopped in time for the last act of the evening on the Jabberwocky stage. The Treacherous Orchestra. What a great band! A loud folk band with a heavy Celtic style had the appreciative crowd dancing and smiling, cheering and shaking their damp clothes until we were almost dry. We had a good old fashioned Scottish shimmy. We even threw in a bit of traditional Scottish dancing moves of which we were not the only ones.

After that we went for a quick a nosey over to the Parabola Stage.  We took a much appreciated seat inside one of the diamond shaped wooden structures and listened to the unusual sounds from the stage, while LED lights flashed and displayed on the structures and the stage all around us. The Parabola Stage had an unusual vibe. It was a mix up of audio and visual parts that seemed to be connected with the musical sections rifting from the stage. It was really quite an interesting concept to behold as well as the architectural structures bringing much fun as the rain drew more and more people into their shelter. 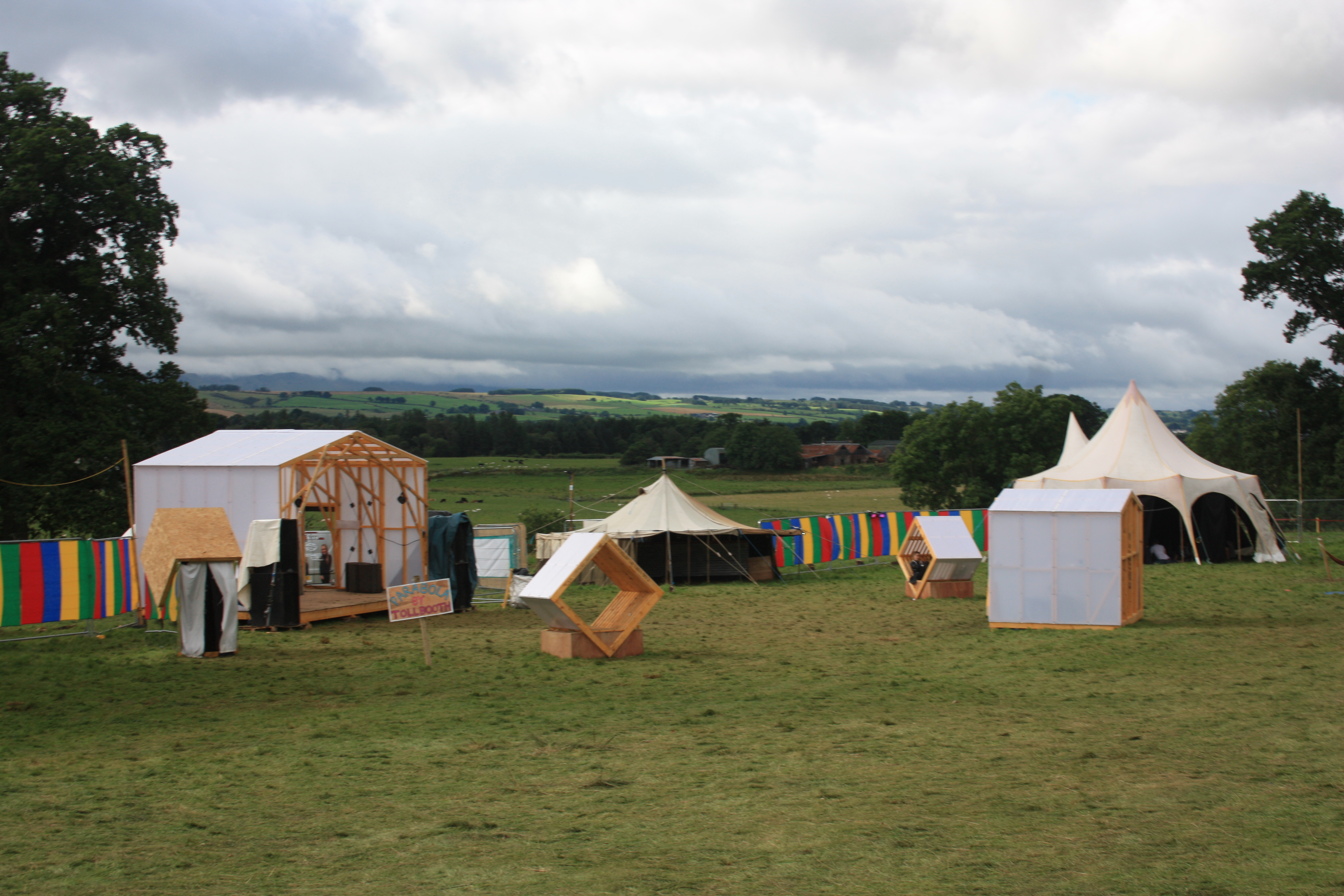 It didn’t matter if it was the awesome, lyrically intense and fast paced duo Bossy Love, (who released a few songs last year without a record label – check them out) or the hilarious onstage antics and punky funky sounds of Colonel Mustard and the Dijon 5, the stage and the seating booths responded with magical startling displays that greatly amused. We crept out of the booths for a while to prance about to the comedic, uplifting rock, folk, reggae sounds of the Colonel and his Mustards but then dived back into the shelter again as they ended.

Amused by the random light shows and the equally random conversations but quite squished in between lots of people we braved the damp night air and made a final stint over to some soggy yet remarkably comfortable hammocks. We swung ourselves absent mindedly to the sounds chilling out from a DJ called Blanck Mass inside the Baino tent. An organic building circling electro sound lulled us during our swaying for a while but we found our bones finally giving into the chill.

So we passed by the communal camp fire on the way back, but it could not compete with the coldness that being soaked though can bring.

We strolled back to the campsite and changed our damp clothes for something dry and whiled away the early hours of the next day talking with the neighbours, sipping cocktails from beneath the cover of a canopy and watching the dark drizzle turn into dawn as the sun light tried to penetrate through a very slushy day. It was a fantastic fast and friendly first Friday.

Saturday was a very short day for us. We slept like logs well into the afternoon! With no phone power, which nowadays means no idea of the time, we occasionally woke to acknowledge the pitter patter of the constant rain, drink tea in the belly of our cosy travelling home and looked out the window occasionally to observe the storm and watch families with buggies come and go.

Cardoness Estate has much to offer for walking and observing the countryside too. 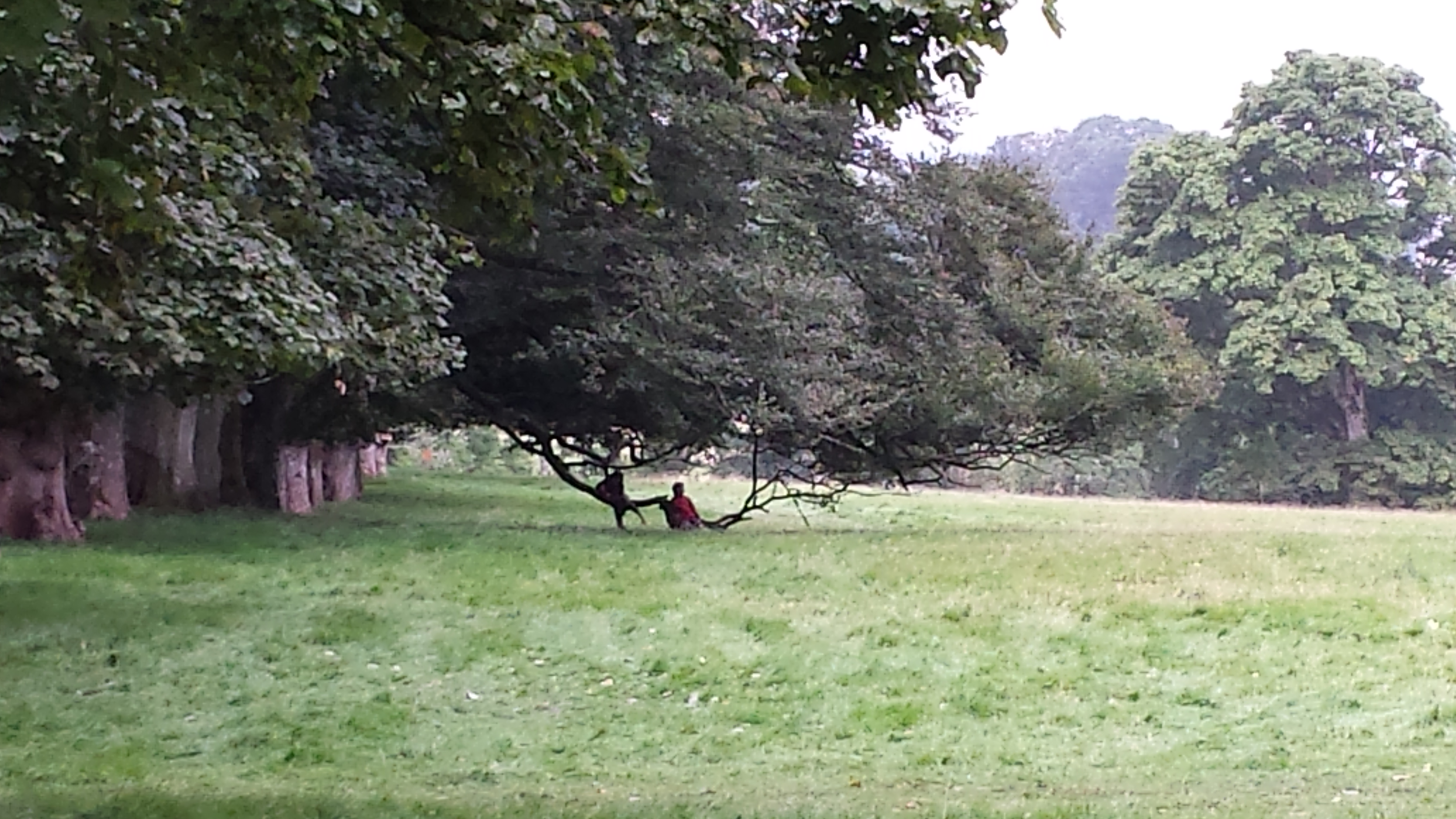 We took a quick mission into the site when the rain was on a break and purchased some delicious food from a variety of the catering options available, carrying plates of crepes and proper coffee back to the van just in time for the next torrential shower.

We accidentally snoozed through the early part of the evening and just about made it onto the very squelchy and dripping site for a night at the Whistle blower venue.

We were well rested and recovered. Yet because we had to head home on the Sunday to be back ready for the real work on Monday morning, we decided that we wouldn’t have a late night or an alcohol fuelled night, so we would be fresh and sober to drive in the morning.

We caught up with the almost finished graffiti wall on site. 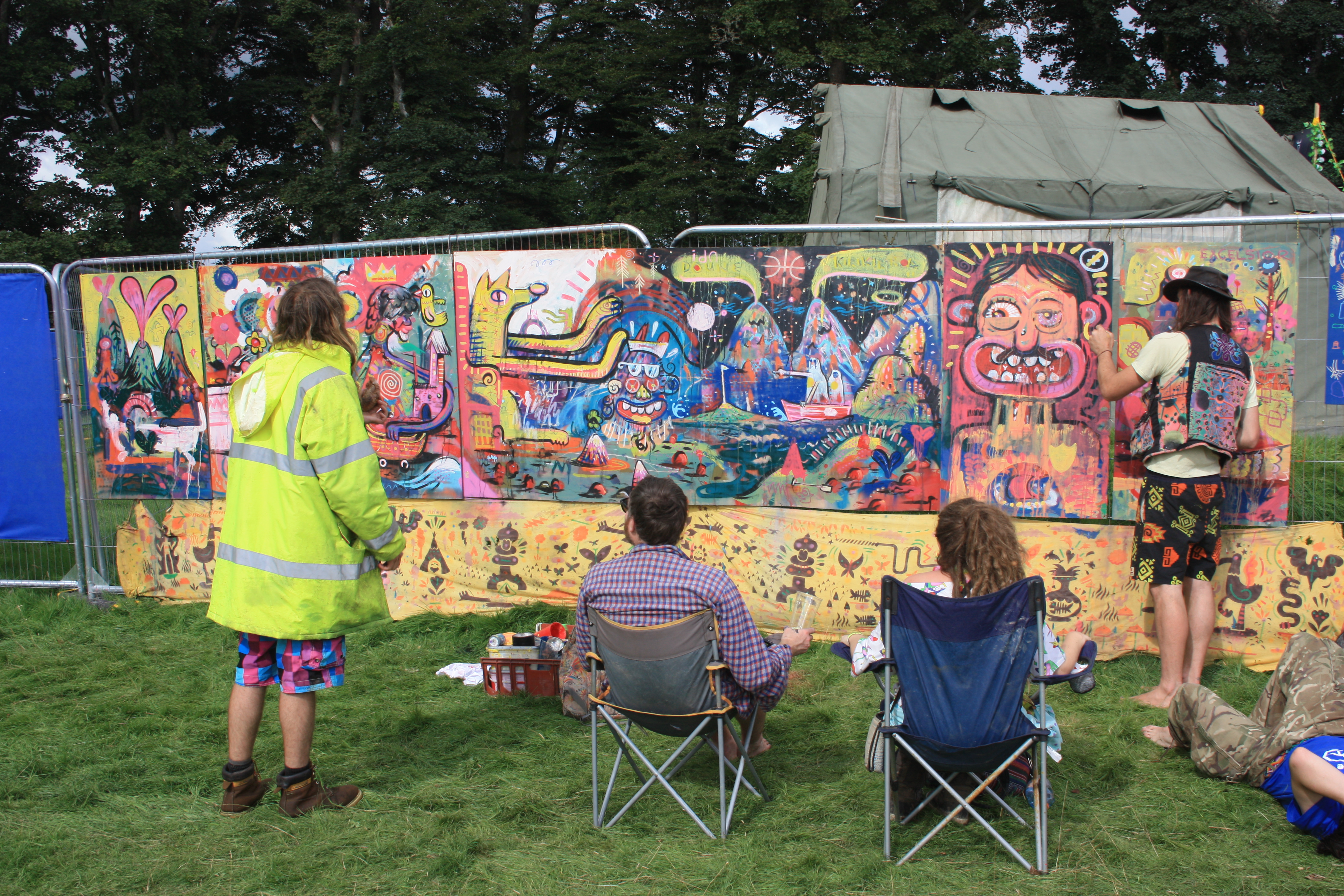 We laughed at the signs for the African toilets (much better than Portaloos). Which were still under construction in some places around the site on arrival, but were worth the wait. Somehow having been constructed with exceptionally large folding doors, weighted with rocks to return them to the closed position. Bewar, Doors ARE big!

The sun almost shone on some of the creative elements dotted about the site. 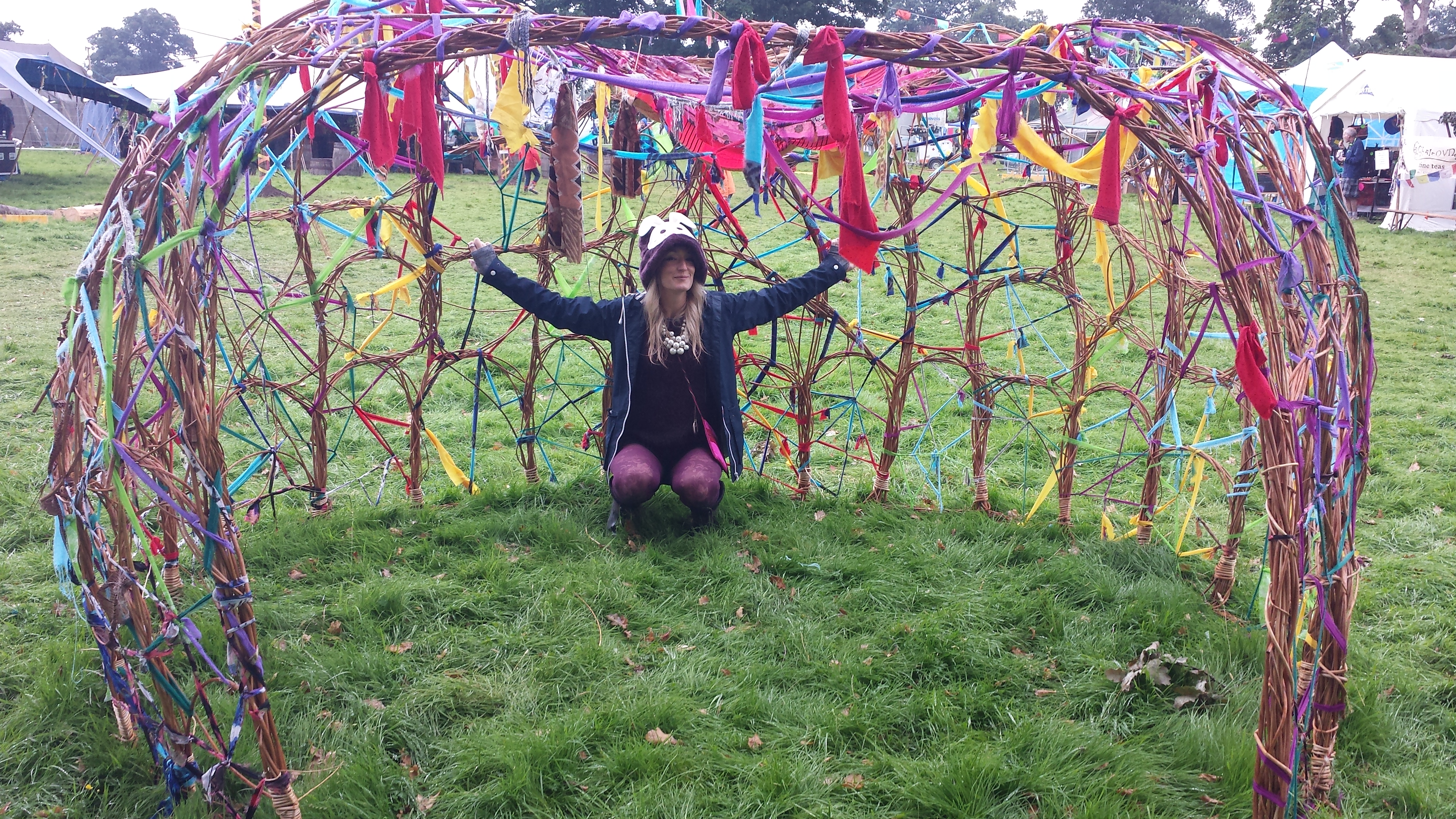 So we happily spent our final evening rotating between the Whistle blower tents. Either listening from the Whistle Blowers Arms or dilly dallying somewhere in between with high spirits and keeping sensible on the alcoholic tit bits.

We caught Bombskare (skank dancing and true ska sound of fun) and the hugely energetic and enjoyable groove of The Destroyers. We totally wore ourselves out with dancing, after all it had been such a long hectic day of snoozing and amusing while enjoying the peace and serenity of the Cardoness dreamscape.

It was with great memories that we climbed out of wet clothes yet again and into our cosy beds. With smiles on our heads and hearts full of joy we slept like logs again, safely protected Doune the rabbit hole.

Sunday morning came and although we were glad to finally see the sunshine, we were equally disappointed not to be able to stay one more day. We took a stroll on the site for more proper coffee and to enjoy the site during the sunshine. The good ole Scottish hills soon rolled around another mass of grey impending doom from the sky and so we packed up while still dry and said goodbye.

Sad to miss such big names as Hector Bizerk and Cate Le Bon. I suspect that regardless of the weather, those who stayed behind in the warming wombling warren to have a fun day in the sun on a Sunday Doune the Rabbit Hole , will have had nothing but a fantastic time, twitching noses and kicking feet with fellow cosy Rabbit Hole Bunnies. 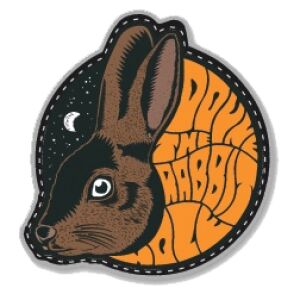