It seemed like everyone was heading in one direction on Saturday the 11th and the mood on the tube to Bethnal Green was buoyant to say the least.  The pavements were bustling with festival goers looking forward to seeing Deadmau5 first headline outdoor show in England.

On arrival you could upgrade to VIP with comfy chairs under cover, posh loos with small queues.  Complimentary BBQ, cocktail bar and LUXX disco one London’s most exclusive nightclub albeit on a scaled down version plus a commemorative photo and all that for just a £15 upgrade, bargain.

The first artist we checked out was Jaguar Skills on the 2nd and aptly named “Let’s Go Crazy Arena”.

The tent was heaving to capacity and it was only 2 pm you would have thought it was closer to 3 am. Everyone was enjoying the set which treated us to some great Dub Step, Drum N Bass and House mixes.

In general atmosphere around the festival was very chilled with lots of people donning headgear in homage to the headliner.

Retro Grade was our next stop on the main stage who pulled in a large audience who were beginning to get more hyped up for what lay ahead.

Skrillex hit the stage sporting long jet black hair (no longer  blonde ) he was animated throughout the set and his heavy dubstep created the nearest thing to a moshpit that you could experience at a dance festival , the crowd loved every minute of it.  One of my highlights of the day and if you get a chance I recommend seeing him live.

Zane Lowe had the unenviable task of following Skrillex he managed to do this with a diverse set that was a mix of everything and anything, with the usual classics getting the crowd singing.

Calvin Harris was enjoyable but I prefer seeing with a band, but I don’t think the crowd agreed with me though and it was getting bigger by the minute. Playing his latest hit ‘Bounce’ and his summer anthem ‘I’m Not Alone’ kept the crowd very happy.

9pm finally arrived and so did the raised stage platform which was turned into a spectacular light & video show as we expected and we were not disappointed.

Deadmau5 came on stage under a sheet dressed as a ghost as did members of the audience also donning   Deadmau5  headbands , t-shirts and embellished mouse heads.

His set included the aptly titled “Ghosts N Stuff “ for which we was treated to an extended mix the crowd enjoying their fair share of Dub Step.

We witnessed a few mad things that day random people running on stage, ghosts running off the stage into the crowd.

The day had proven to be a great success, with the vast majority of the crowd leaving very very happy, a success that would be a definite yes, thanks LED. 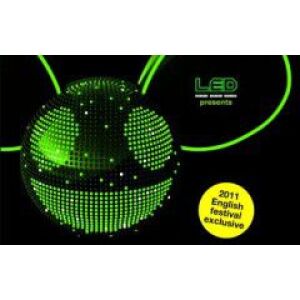