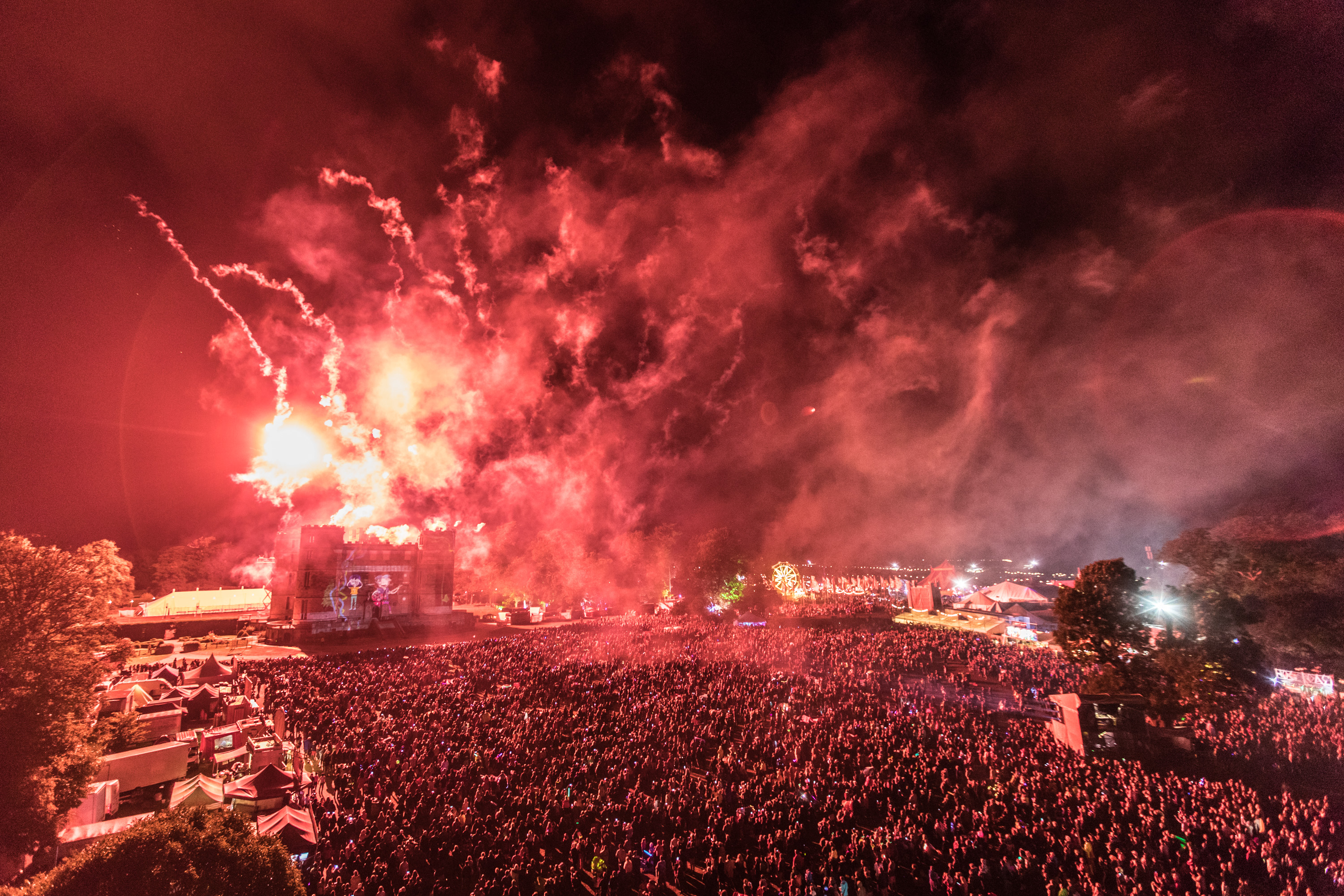 We’ve been attending Camp Bestival for 9 happy years and It has a special place in my heart. In its 10th Year I still had the most amazing weekend but I have to admit it has lost its sparkle somewhere along the way.

It wasn’t that the festival was bad, far from it indeed, it just wasn’t as good as it used to be. So what has changed? The main thing for me is the line-up, over the years Rob Da Bank has had a knack of booking acts before they got big. The likes of Ed Sheeran, 1975, London Grammar, Ellie Goulding and Mumford and Son to name a few played the Big Top at Camp Bestival. I used to get so excited studying line-up and listening to every artist I’d not heard of and relished the discovery of new music. In more recent years the new artist and bands are reducing and there are much more ‘retro’ and cover band which frankly I’m starting to find tiresome. It was expected that there would be some big names and surprises to celebrate Camp Bestivals 10th Birthday with the exception of Leftfield it just didn’t materialise. In fact the 10th Birthday seemed to pass with a whimper rather than a big bang!

That’s what I didn’t like about this, but what is it I loved and there is so much to love. The kids entertainment is 2nd to none, the Kids Garden has arts, science, puppets, circus skills and the recently added Worlds Biggest Bouncy Castle. Away from the Kids Garden you have tree climbing, den building and craft workshops in Dingly Dell. But really what the kids want are to see Mr Tumble and Dick and Dom, and this year Mr Maker and after all these years Saturday morning at the Castle Stage still pulls in the biggest crowds. Camp Bestival still remains one of the best family festivals for those with younger children. 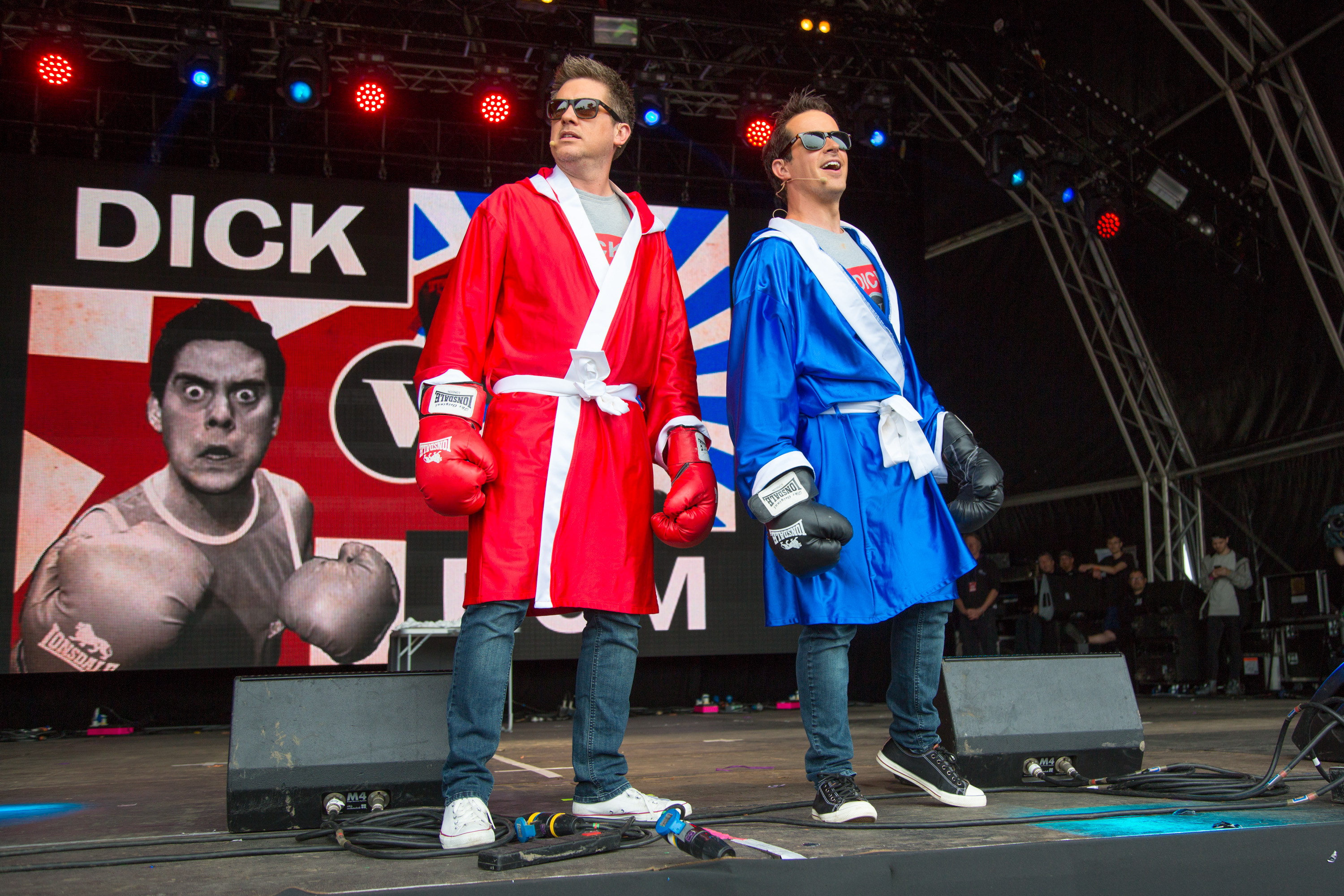 If you aren’t interested in the bands there is always a DJ playing somewhere on site. There is Bollywood, DJ BBQ, Caravanserai, Confetti Wedding Disco and all the all new Big Disco’s with the Worlds Biggest Disco Ball. And there is music for every conceivable taste, my favourites this year were Norman Jay in Bollywood on Friday evening, Junior Jungle in Caravanserai at Sunday lunch time and the real highlight of my entire weekend dancing to Sara Cox’s Can’t Get Enough 80s at the Disco Ball. In fact I found myself drawn to the Disco Ball all weekend, enjoying dancing in the rain and sliding in the mud. 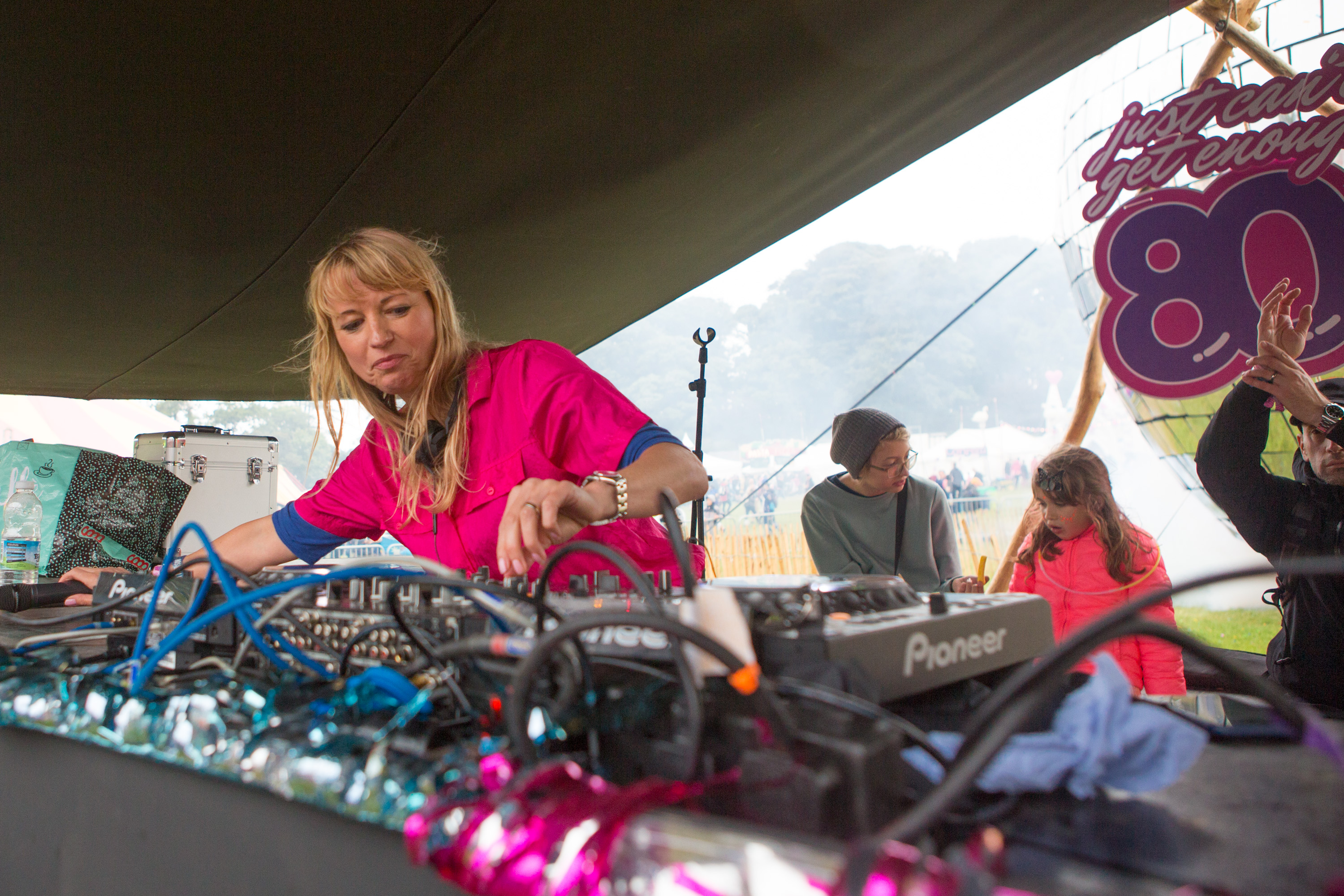 The other thing I look forward to every year at Camp Bestival is the food and drink and that’s one area that just keeps getting better. The food is always of exceptionally high standard whether its burgers and pies, afternoon tea in the WI tent or the superb street food in the Feast Collective. My favourites this year were Claw who served the most amazing crab top fries, Seadog who served a very tasty Japanese inspired fish burger and Miligi Vegan Kebab, a treat for any vegan offering a Vegan Vonner topped with tasty sauces and salads.

While I’m on the food its worth mentioning the drinks. I’m a big cocktail fan and Camp Bestival has no shortage of cocktail bars, the well place Jam Jar Bar in the Kids Meadow is fantastic and the cocktail bar located in the Caravanserai and The Magic Meadow offer a wide range of classic cocktails. It’s safe to say that I had my fair share of Espresso Martini’s!

Our musical entertainment started on the Castle Stage Friday afternoon with Reverend and the Makers. With the enigmatic Jon McClure up front the crowd quickly joined in singing to their classic hits, obvious favourites being Heavy Weight Champion of the World and He Said He Loved Me.

Later on the Castle Stage were the undisputed kings of Camp Bestival, The Cuban Brothers. A staple now for the last 10 years they found themselves back in the afternoon slot for which they are known and loved. Although the last years late-night slot was hilarious and a little bit risky then we are used to, it was great to have them back where they belonged shouting ‘Is that the Castle?’ The main stage was filled laughter, singing and dancing. I wish they could play more than one set. 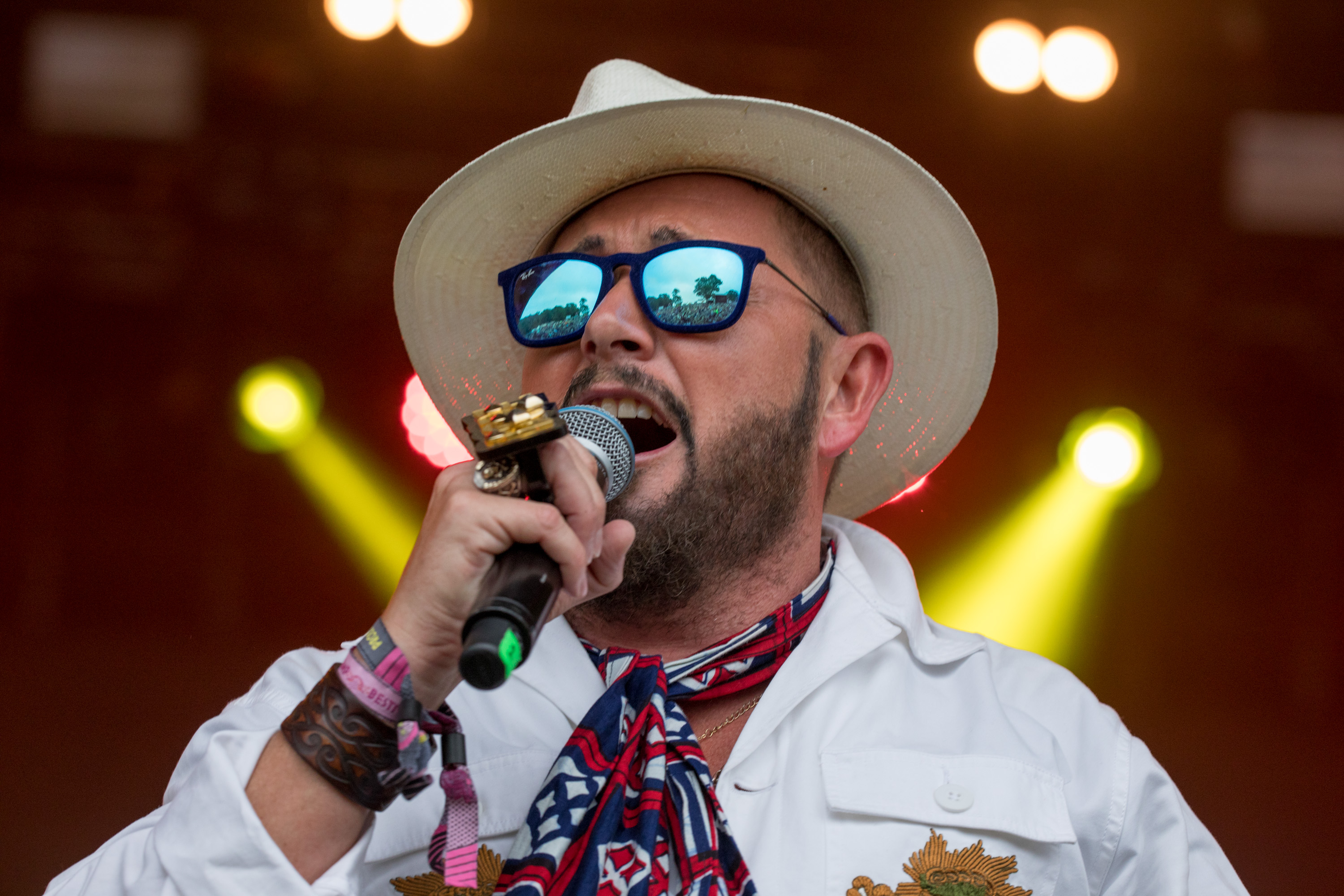 I mentioned it before but I need to mention it again but Sara Cox presents Just Can’t Get Enough of the 80s at the disco ball was outstanding. The atmosphere was electric, hundreds of people singing and dancing in the rain to 80s classic after 80s classic. For someone who has already complained about ‘retro’ acts I do love an 80s disco!

After getting slightly damp at Sara Cox we headed back to the tent to dry off, just in time to hide from the mother of all rain storms. We decided to stay put until it passed but sadly it didn’t pass quickly and as a result we missed All Saints (one for the Dad’s apparently) and Mark Ronson. On the upside we had an awesome tent party with our friends, so every cloud has a silver lining.

Saturday morning was miserable and wet so we took it easy, we don’t usually rush out to early as Saturday morning is kids time at the Castle Stage and its best to steer clear if you don’t have little ones. We headed in for Alice Jemima on the Castle Stage, a beautiful singer reminiscent of Corinne Bailey Rae, who had the audience enthralled with her thoughtful lyrics and poetic style. Kate Nash followed on with an altogether different set. Flamboyant and energetic Kate Nash jumped up on the barrier and sang with the crowd. As a fan of Kate Nash it was a treat to see her perform Foundations and Mouth Wash. 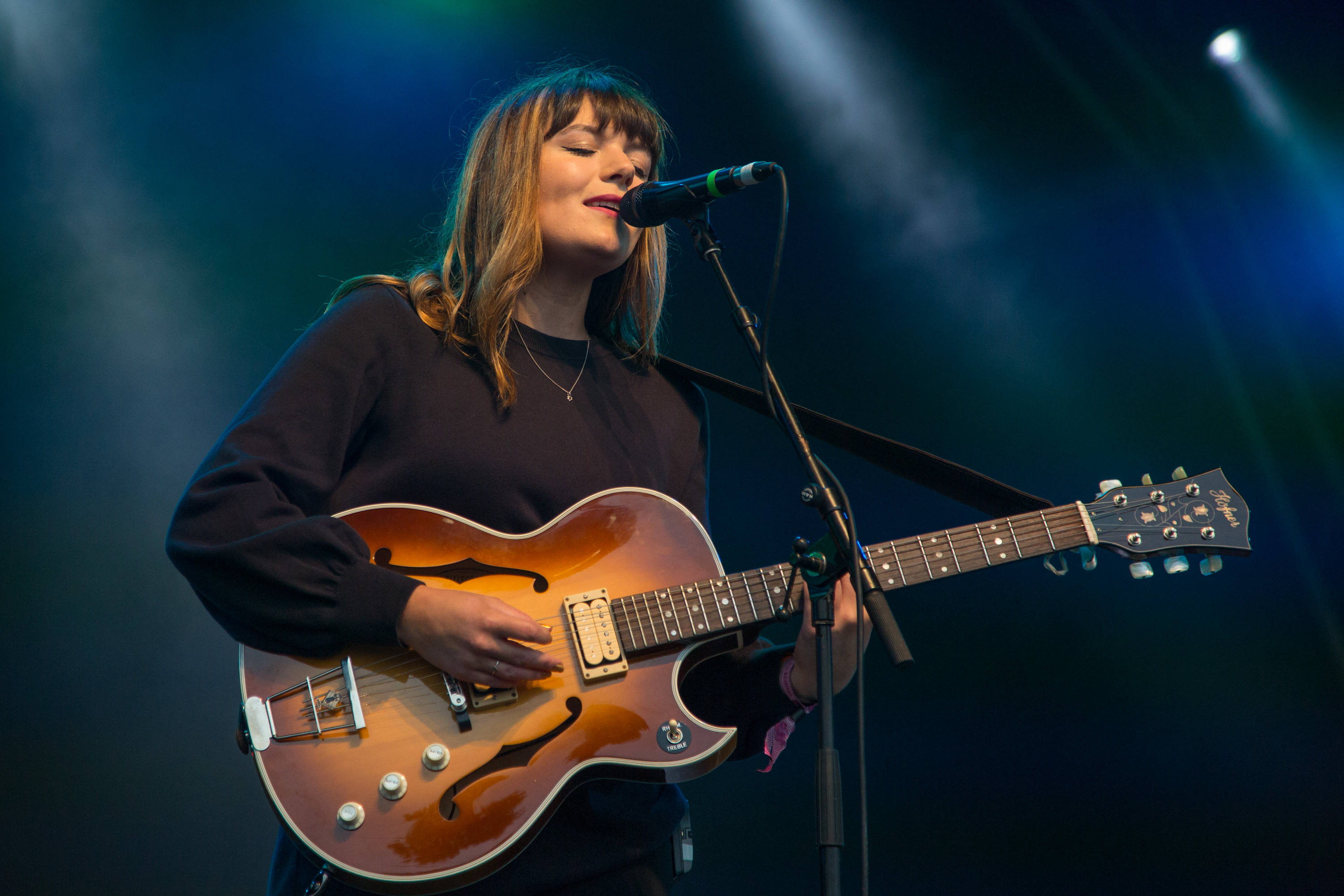 One of the bands I was looking forward to were the House Gospel Choir and they didn’t disappoint. Dubbed ‘The Choir that House Built’ they belted out some of my all time favourite house tunes truly raising the roof of the Big Top.

Holly Johnson was next up on the Castle Stage, playing all the Frankie Goes to Hollywood hits but sadly didn’t do Two Tribes resulting in the crowd chanting for more and then leaving rather disappointed.

After some technical delays, Saturday night headliners Madness threw out their usual greatest hits collection at the Camp Bestival crowd. As ever, at such events, the smattering of new tracks confused those who don't care and, sadly, the tribute to Amy Winehouse (Blackbird) left a few bewildered. However, whenever the audience sensed an old hit, and in spite of the shortened set because of the hitches there were still plenty, the hordes were stomping in the mud. For once, I was glad not to be at the front- sheets of water kept gushing from the stage, soaking those that were there, but not washing away their smiles. 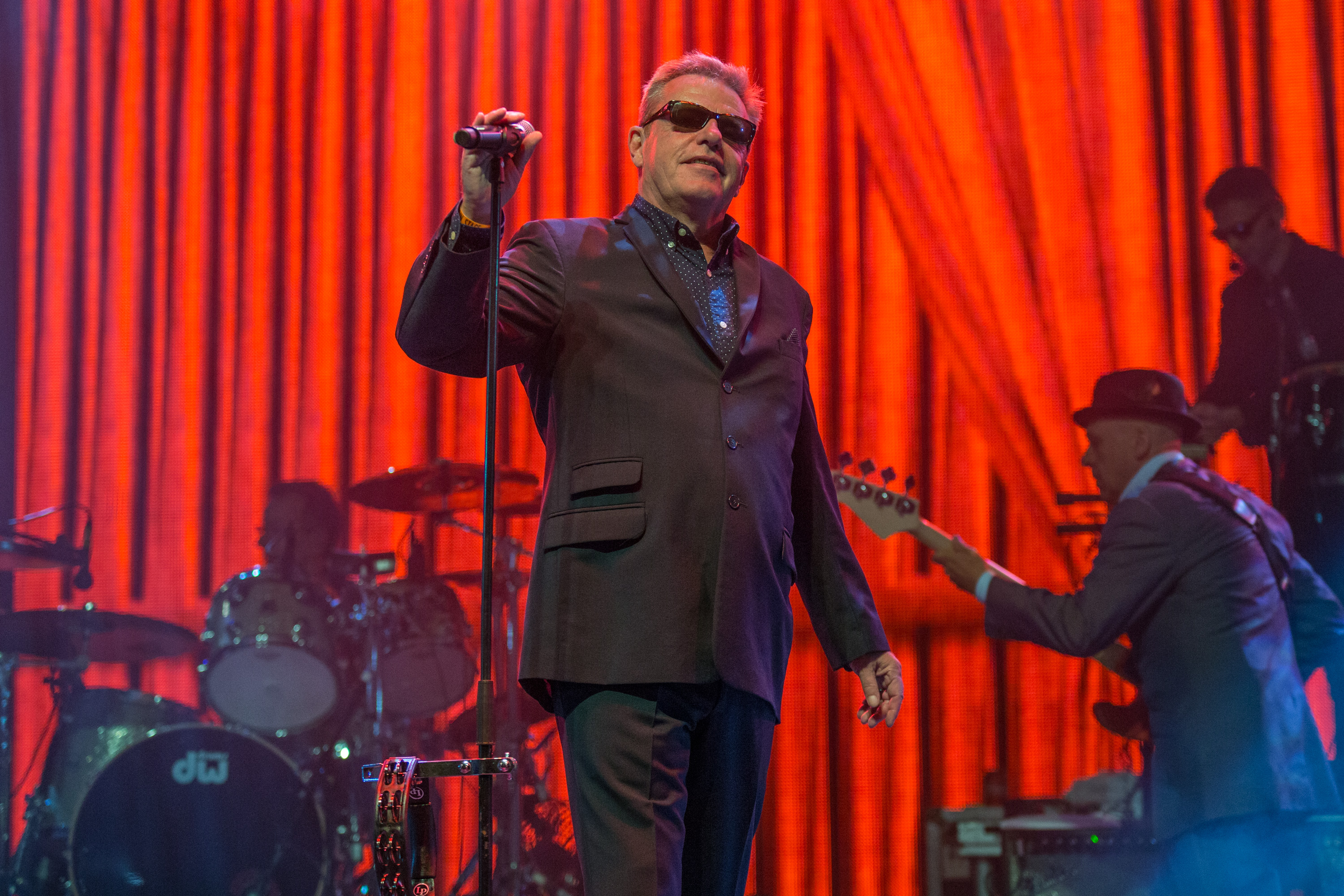 Hallelujah Sunday saw the rain stop and the sun come out. We headed in early to have a few cheeky cocktails at Caravanserai and a dance to Junior Jungle. It’s a great sight to see kids on adults shoulders dancing along to Jungle, it definitely set me up for a good day. Most of Sunday was spent wandering around the site listening to music away from the main stage. A great find was Thrill Collins on Oberon’s Observatory, written up as ‘a skiffle party band who have a habit of rearranging some of the most epic pop songs of all time’ and they aren’t wrong. Their version of Prodigy Out of Space is something special.

The much-anticipated Sunday night headline were Leftfield and for many put in the best performance of the festival. They were headlined as performing Leftism and I did wonder how they’d manage to perform the guest vocals – I secretly hoped John Lyndon might make an appearance - but they took the album, updated it and performed a definitive dance album exceptionally. The sound was amazing with bass that thundered through the crowd, and the visuals jaw dropping – they even had projections on Lulworth castle so everyone got an eye catching treat. 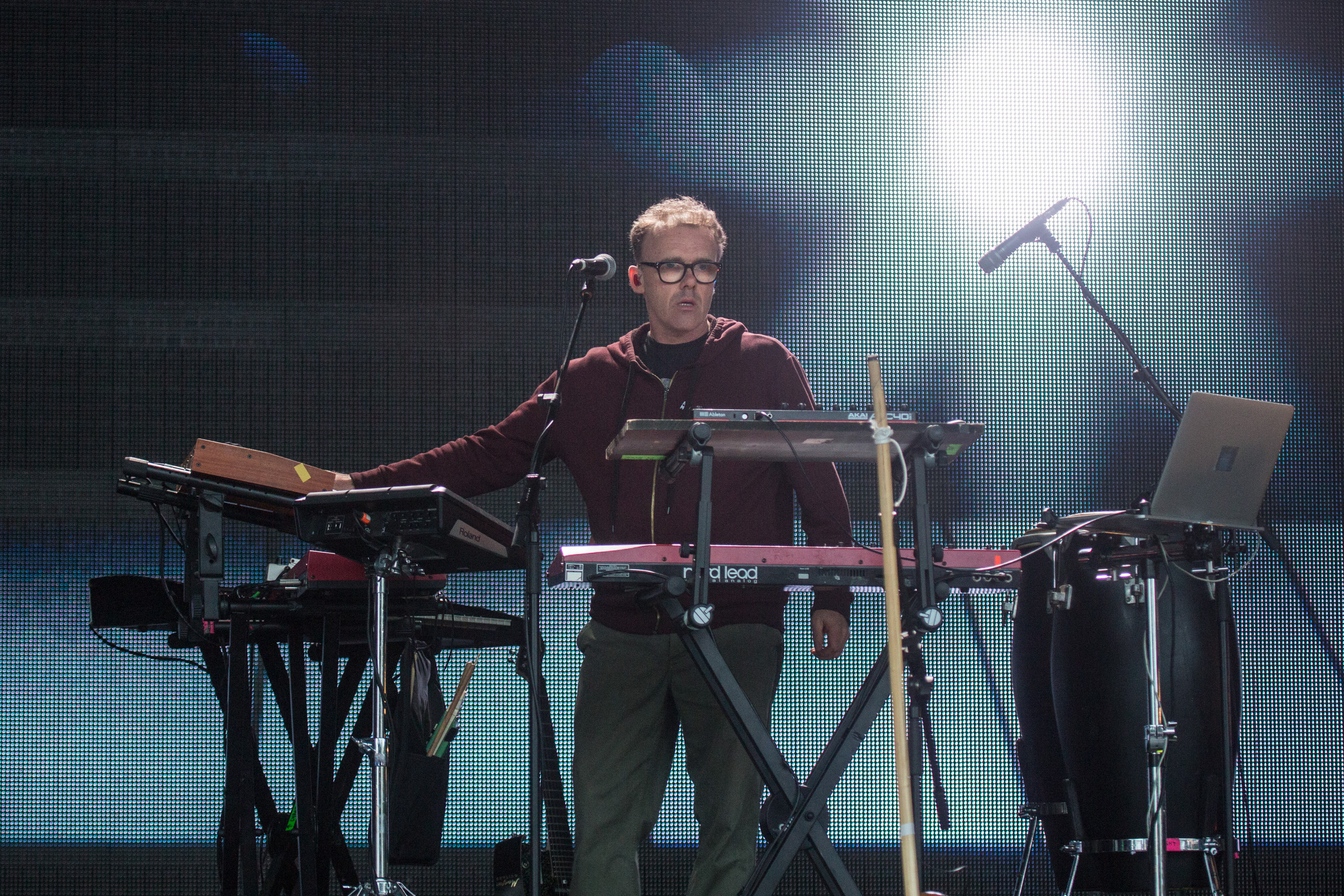 With little time to take in what we had just seen it was straight over to the Big Top to catch The Dub Pistols. With the crowd riding high after the amazing Leftfield The Dub Pistols kept the energy high and had the entire Big Top bouncing. I’ve seen them a good few times but this was by far the best and most energetic set I’ve seen them perform.

It is really with great sadness that this is our final Camp Bestival. We have had the most amazing experiences over the last 9 years, made friends, seen fantastic music, tried our hand at DJing and even got married in the Inflatable Church but its time to move onto a more adult festival and leave Camp Bestival for those with young families. It truly has been fun xx. 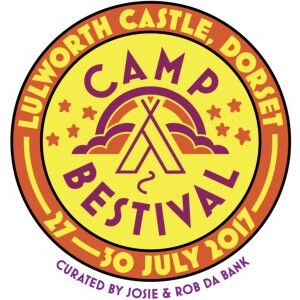