Brownstock 2011 The Browns invited us to the party and itâ€™s one we want to attend every year.

Back in 2004 The Browns children wanted a BBQ with friends on their farm with a couple of local bands playing on some farm equipment. Seven years down the line itâ€™s not just family and friends but the whole community who travel to the farm for a 3 day's of celebration, exhibitions, competitions, feasting and of course music.

Their motto is â€˜as far away from V as we can beâ€™ and thatâ€™s just what it is, not a chip in sight, no wall to wall branding here. Youâ€™re more likely to bump into your neighbours, your friends, your childrenâ€™s friends and see bands headline the stage that many moons ago you watched performing at the local school.

The festival has come such a long way, with more and more people wanting to join in the fun alongside local bands this year there were the likeâ€™s of Example, Athlete, Ms Dynamite, Pendulum (DJ set) and many more. Not bad for a festival that has only been running for 7 years many other festival organisers must have wanted to have a peep over the hedge to see what they could learn.

From the Main Stage to the Silent Disco, The Park, The Panto Stage, Art Camp and Piano DJ Bar, plus more if you have the energy you need never go to sleep. In fact some only grabbed a few hours each night not wanting to miss anything.

As Example said â€œthis is in the middle of nowhereâ€ all around the farm is the rolling Essex countryside looking down onto the River Crouch. Â Â Although the festival has grown year on year it is still relatively small which ensures a feeling of intimacy, that the major festivals have lost. Â There were no long queues for the loos here, or the food stalls, just people casually ambling around from one stage to another

In the guest areas you could see X Factor winner Matt Cardle having a chat with Jon & Tracy Morter (organisers of the Rage against the X Factor), the guys from Daring Dynamos discussing their 18 month around the world bicycle challenge for War Child. Fridayâ€™s headliners were local indie band Stealing Signs, who are regulars at Brownstock , their front man Nick Acton, managed the expectant crowd and when he gave the word a hundred balloon's were let off into the night sky.Â  Their setlist included such crowd favourites as Write This Down andÂ  Batteries.Â

Come Saturday morning it was evident that the crowds were much larger with people coming to see the chart topping Example.

The main stage had a 10 minute turnaround for bands which meant that there were a massive 16 bands on Saturday, some of the highlights of the day were Doll Set Tones whose set matched the weather bright and very enjoyable.Â  The Doll Set tones are releasing their single Coming Home on the 15 September andÂ hope to raise some money for Macmillan Cancer Support with their salesÂ http://bit.ly/pt3eeO

As dusk descended on Brownstock the New Town Kings hit the stage, a ten piece Ska band, their set was infectious and upbeat, the audience loved them and where baying for more by the end of their set. Next up it was The Milk, hotly tipped to be the next big thing and its easy to see why, Â their blend many types of rock into their performance which keeps you on your toes, their set list included the new single All I want is Danger and a cover of The Chemical Brothers Push the Button.

By the time Example made his stage entrance it seemed that everyone was at the main stage, even the Good Shed was empty, could the man deliver?Â  The answer was a big fat yes as he said to FFA earlier this year he isnâ€™t the best singer, the best rapper or the best looking, but he does know how to put on a performance.Â  He had the crowd eating out of the palm of his hand as he went through a set of hit singles, and reminded everyone that his new album Â â€˜Playing In The Shadowsâ€™ would be available from midnight.Â  The set list included Kickstarts and The Way You Kiss Me. Over in the Goodshed there was a non stop dance party going on to the sounds of Jaymo & Andy George, Redlight, Ms Dynamite, Shy FX & Youngman, Union, with Brownstockâ€™s very own Mat Format & Messy MC being the finale.Â  Its fair to say that the Goodshed was heaving most of the day and night!

The good weather of the first two days was too good to be true and we woke to rain more akin to the Lake District than Essex, but, unlike many festival sites the ground didnâ€™t become a quagmire, so everyone could move around freely.Â  As the day went on the weather improved and there was a big crowd in attendance to see another local favourite AOF who delivered a beautiful set of jazz infused funk, ideal for any Sunday afternoon, their set included Avalon and Danana

Having had a warm up gig in Hoxton The Magistrates returned to Brownstock, to deliver a great set which allowed the locals to roll back the years (ok only a couple of years), the band sounded as good as ever and included Burning The Pain Away and Make this Work.

It was now down to Athlete to close the main stage, and they did it in style delivering a greatest hits set much to the delight of the audience, they toyed with the crowd about having to drop Wires due to curfews, but to no ones surprise it was their encore and much to the chagrin of the security Joel Pott asked everyone to get on peoples shoulders â€œit is a festival after allâ€ this was a fitting end to a great weekend of music on the main stage Over in the Cow Shed, it was another day of full on partying with sets from Magma, Kila Kela, DJ Zinc, Scoundrel the climax of the evening being a Pendulum's one hour DJ set which had a tent full of people bouncing off the walls, the perfect end to a perfect weekend. But in all honesty as great as the music was itâ€™s really just a part of what this festival as it is about, Â you could doodle in the Art Camp while listening to DJâ€™s, watch some of Â the dance troops performing high energy acrobatics. Â Listen to story telling or comedians perform on the back of a truck while sitting on straw bales.Â  Alternatively you could take your instrument along for a bit of Karaoke and letâ€™s not forget the skate boarders with their custom built ramp.

The organisers have realised that to make a great festival their needs to be attention to detail in respect of all aspects of the festival, this included the food vendors, so we were treated to high quality festival food including locally reared Aberdeen Angus Burgers, oh yes the beer & cider was good too.

For the Happy campers the local Eatery provided pies and mash, beans on toast and worked day and night to keep those camping fed and watered.

So when youâ€™re planning your festival calendar for 2012 pencil in Brownstock you will not be disappointed, early bird tickets will be going on sale soon so watch this space. 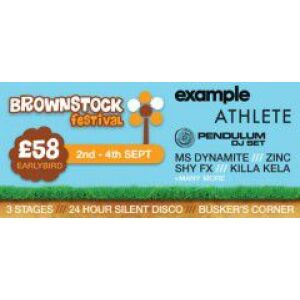