A wonderful festival. As somewhat seasoned festival reviewers, FFA are delighted to say that there was absolutely nothing to fault here. Indeed Beardy Folk Festival 2018 was a monumental triumph. The fact that all this was achieved in the first year of operation is nothing short of stunning.

Let’s start with the basics. The venue of Hopton Court in Shropshire was an inspired choice with the small but perfectly formed festival nestled within a large Walled Garden in the country house grounds. An absolutely beautiful setting with the Garden naturally sloping towards the stage area – it was ideal. The sun gods shone on this quintessentially English garden party scene and all that was lacking for FFA were cucumber sandwiches (no crust), crumpets, and maybe a croquet set. A large covered second stage incorporated the excellent bar and outside the walls sat a lovely village green area hosting the Morris and Appellation dancing. Throw in a thriving Circus skills area and kids rides for the younger element, plus other fascinating malarkey around the compact site, and this was pretty much festival heaven in the palm of your hand. 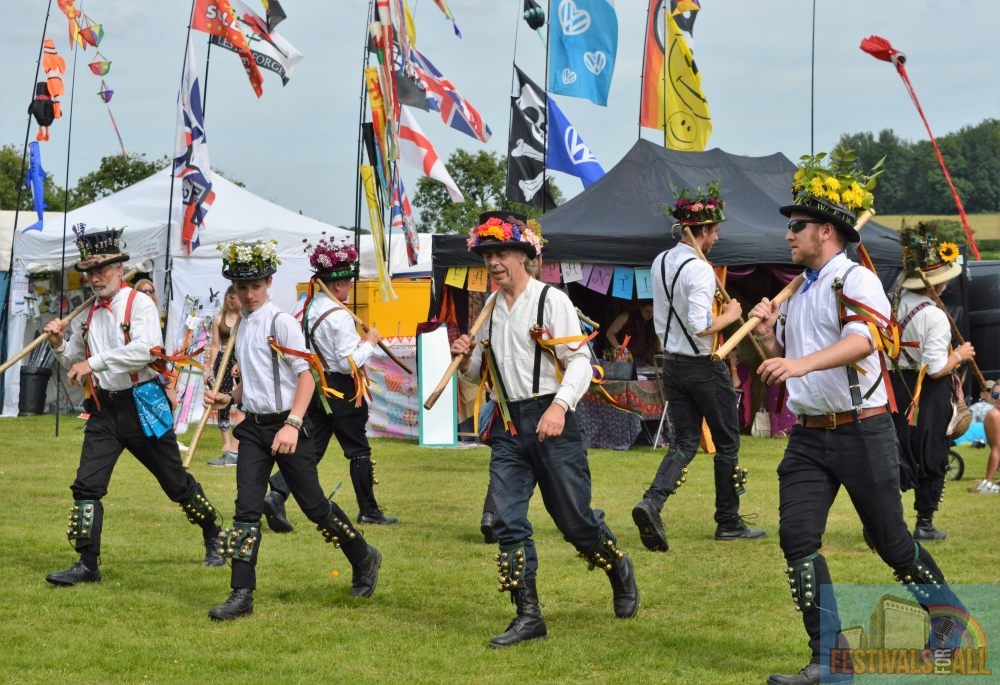 Sufficient food and miscellaneous stalls to satisfy most tastes dotted the site, and the bar knocked out wonderful local ciders and Hobsons ales from just down the road at extremely reasonable festival prices. Mind you, FFA never got much further than the excellent Gin Bar at four quid a double – but that’s another story. Hot showers were available and the plentiful, and spotless, toilets were first class. Indeed the whole festival was spotless – a tribute to crew and patrons alike. The stage sound mixing and visuals were faultless, the organisation superb, and the… and the… you starting to recognise a trend yet? As FFA said up top – nothing at all to fault here.

A festival is nothing without its audience, and the Beardy crowd were as excellent as they were diverse. All ages, all types, all up for a good time. Again, for a festival in its infancy, the sense of community and camaraderie that Beardy generated in its first year was an amazing achievement for all concerned.

The acts appearing over the weekend were universally excellent – no fillers here. Stage times were staggered so no musical downtime either, with many of the main stagers performing acoustic sets over on the second stage across the weekend. The calibre of virtually everything was astounding, and here’s the rub … Some festivals never achieve that trust element where the festival becomes bigger than the artists that appear. Many festivals operate for years and remain little more than bands in a field. Right from the start Beardy have set such a high quality bar in everything they do, that you just know they will continue to get it right in years to come – you could book tickets for subsequent Beardy Festivals without recognising any artists and you just know it will be amazing. A compliment indeed to an event so young! 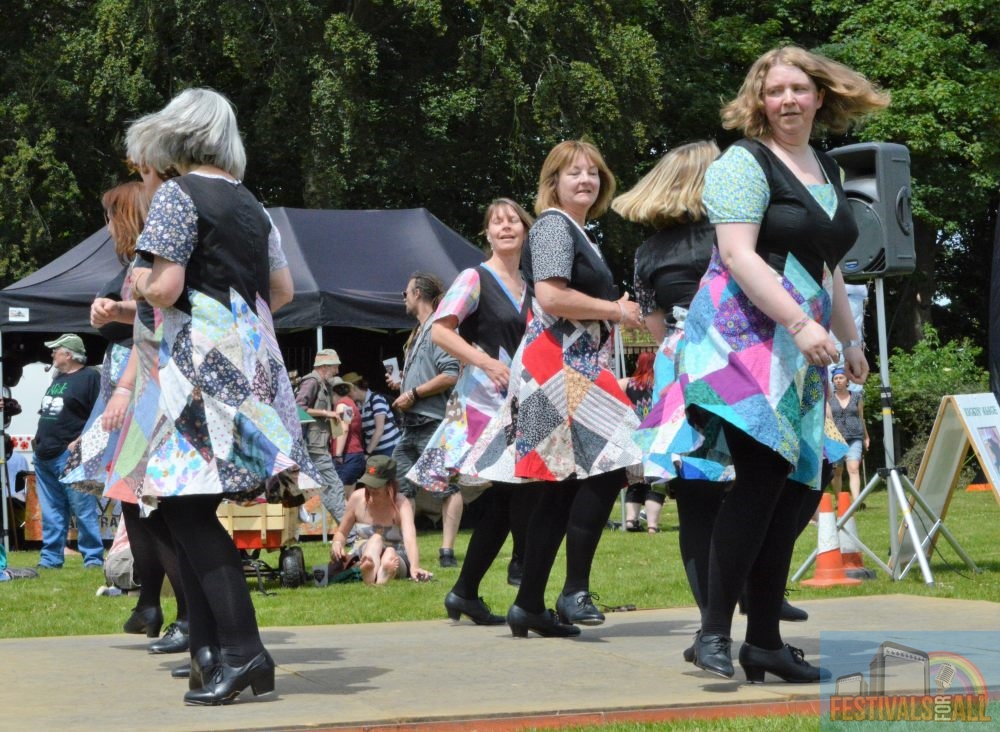 Now all music reviews are just opinion. This happens to be ours. If you were lucky enough to attend you’ll have your own favourites… if your band does not get a mention here we were either at the Gin Bar or elsewhere. Omission is not criticism! Here’s what rocked our boat…

FFA rocked up late from Pembrokeshire, as always, but caught the excellent Chris Helme on the main stage. The man set the tone and standard for the whole weekend; an absolutely cracking set of old Seahorses classics interspersed with wonderful self-penned solo efforts and a smattering of superb covers… not least a rollicking version of The Dead’s ‘Friend Of The Devil’ . There is more to Helme than fine tunes and accomplished musicianship of course – the banter and the sheer joy of performance comes free. By the time he left the stage you felt as if you knew the man. One hour in and FFA were on a roll. Blimey, False Lights! They are much more than simply a vehicle for Jim Moray’s and Sim Carter’s considerable talents, the whole band produced a set of stunning soundscapes effortlessly shifting from pathos to glee in the twinkle of an eye. A wonderful headliner to close off a brilliant Friday night. By the end of Day One the folks at Beardy had laid down a marker about the calibre of artists on the menu… over the rest of the weekend they continued to excel themselves. 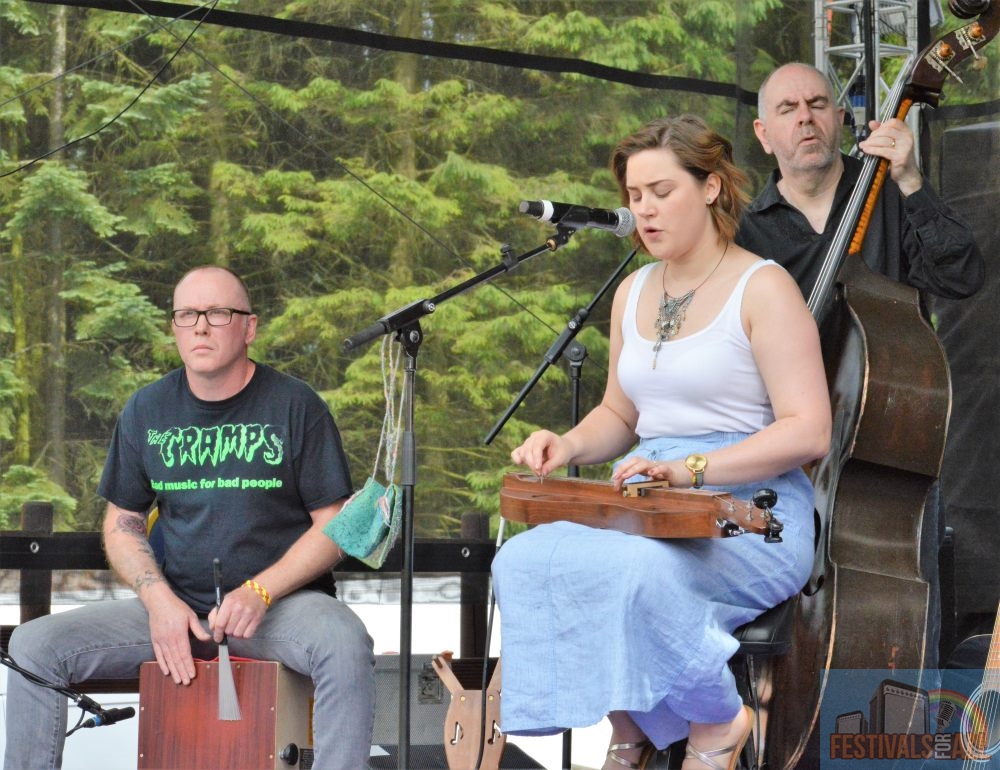 Blisteringly hot, what better that the homespun philosophy and jocular tunes of festival legend Richard Digance to while away a lazy Saturday afternoon. A genuinely funny and talented entertainer who’s self-effacing take on the lessons of life in words and song had the crowd eating from his hand. Kim Lowings and The Greenwood were next up for FFA with a beautiful set. Fine voiced, and no mean dulcimer player, she’s astute enough to surround herself with excellent musicians too. Double bassist Sutherland in particular was absolutely on the button. Another cover, this time Joni Mitchell’s ‘Carey’, stole the show. After last night’s excesses with False Lights, that man Jim Moray returned to the main stage for a wonderful solo set. This was a more thoughtful, contemplative outing that delighted and entranced the early evening crowd, no more so than with the centrepiece of the set – the haunting ‘Voices of Earth’, an ebullient anthem to the human spirit that drew wild applause. Excellent stuff. 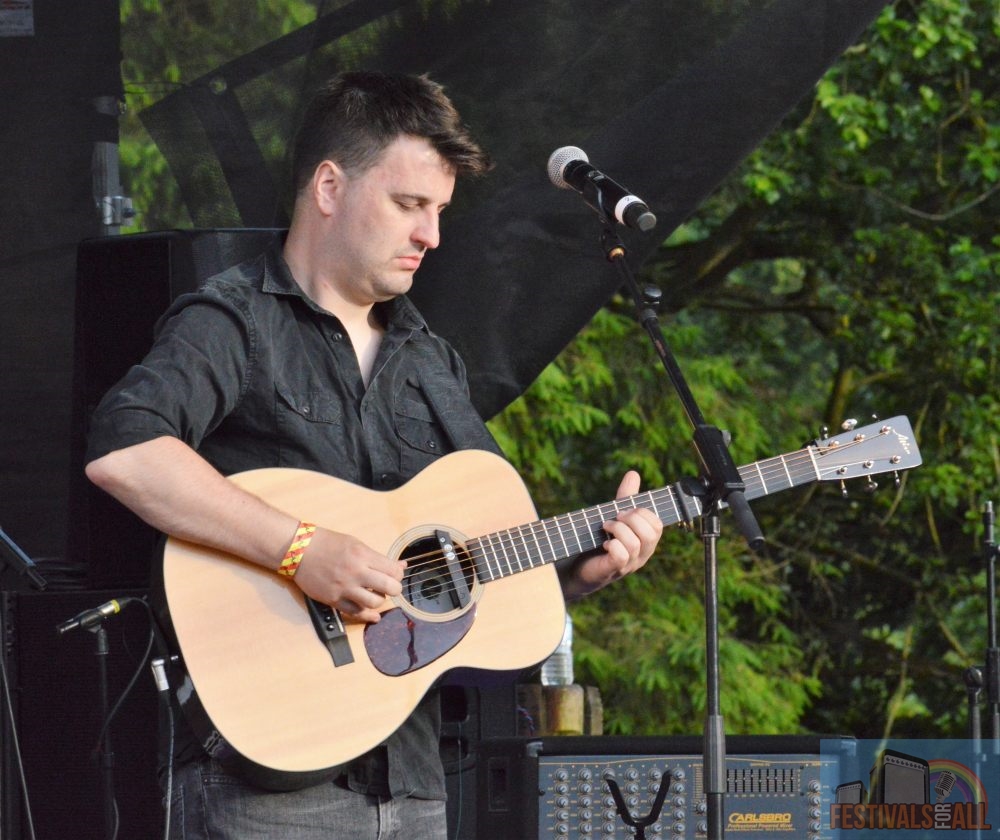 As we said at the start, the Acoustic Stage was an absolute delight with individual acts too numerous to mention, any and all of which could easily have graced the main stage – if they hadn’t already in another guise! One act in particular excelled in this reviewers ‘umble opinion – Fly Yeti Fly. This Lorna Somerville and Darren Fisher combo produced a classic hippy-esque folk sound as pure as the driven snow, with a fragility and depth to the vocal interplay that at times made the skin tingle. Do check these guys out. Next up was one of the sets of the festival from Orphan Colours. Having been blessed to see Llewellyn and Burn in the much missed Ahab a few years back you just knew these guys would nail it – and nail it they did. The rest of the band are no slouches either and they knocked out a great set of blistering Americana and country rock. Wonderful. 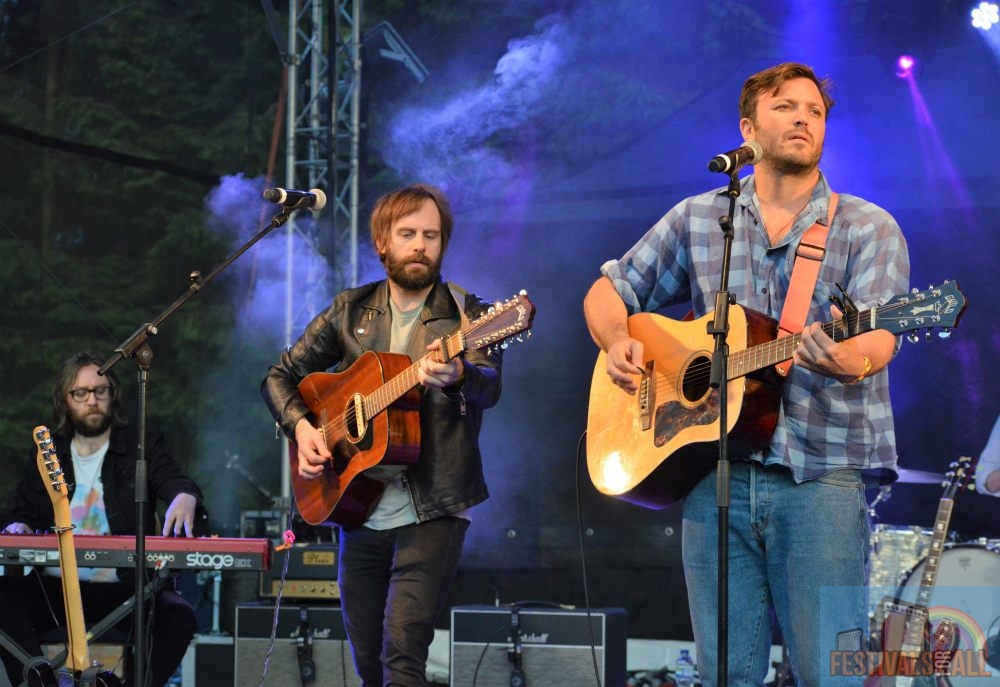 Folklore (gettit) dictates that in the best of all worlds the Saturday night headliner should be the talking point and set of the festival. Beardy yet again delivered on the dream with the stunning Skerryvore. What a set; indeed what a brilliant lead-in to their show with Dalglish and West producing one of the best lead guitar / drum backbeat intro’s this wizened old reviewer has witnessed for many a year. What a moment. The band were absolutely kicking, and once the trademark twin bagpipes roared into life, FFA, and the rest of the crowd were up and away with the fairies. Enjoyable mayhem down the front and the best crowd reaction by a country mile. Now that’s what you call a Saturday night headliner! 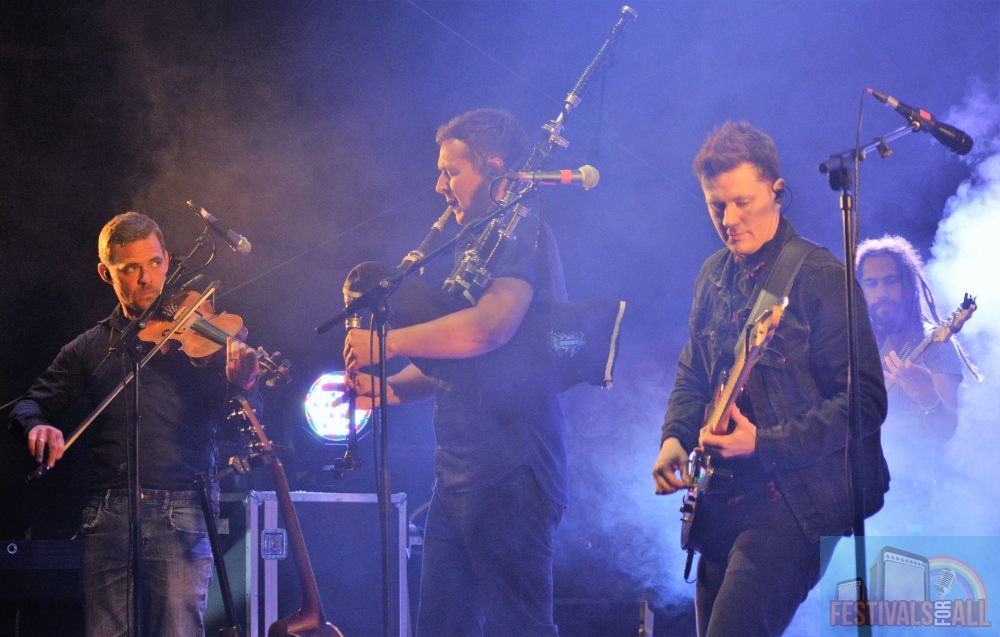 ‘Phew – Wot A Scorcher’. Sunday was HOT – both temperature and music wise. An absolutely electric day on both stages. Mr FFA was down the local boozer to watch the match, on the understanding that whilst he may witness the missed bands another time, he is unlikely to witness England put six past anyone again! Mrs FFA fretted the absence by drinking cider and watching Granny’s Attic. These guys looked like they had a collective age of 12 coupled with the classic folk tunes and wisdom of the ancients. A stunning depth and maturity to their music for ones so young. Throw in some humorous fruit and veg banter and a brilliant ‘What I Saw In My Dream’ and Sunday was off and running. Excellent. Kathryn Roberts & Sean Lakeman have a wonderful dynamic on stage and the poignant ‘52 Hertz’ set the tone for a magical and genuinely lovely set. 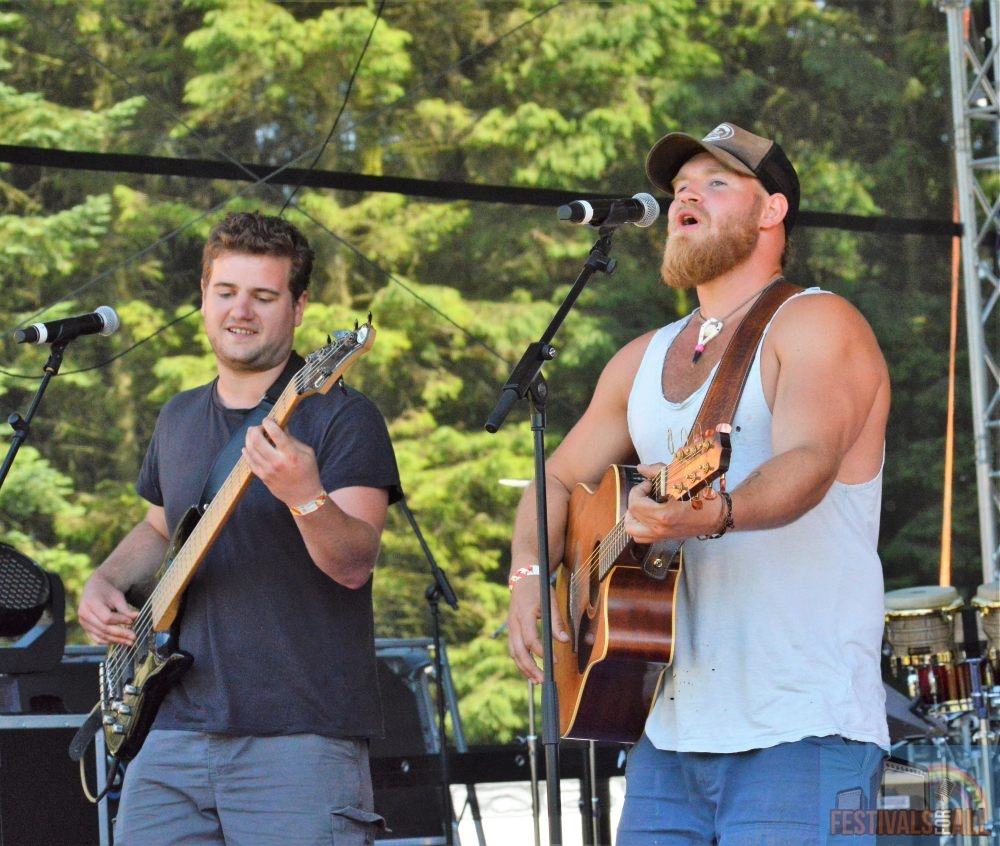 Oh Tom Dibb, what can we say. The guy had set up shop on the campsite over the weekend and played splendid blues and reggae out of the back of his van to the world. FFA caught a midnight acoustic jam with the band on Saturday, and this man is impressive. Let loose on the main stage and the 45 minute slot was never going to be enough for this boundless talent. A stonking ‘Hit The Road’ and he was gone. Probably find of the festival for FFA. Now then, this reviewer abhors the whole concept of copy lookalike bands with a vengeance, but it will come as no surprise that Beardy could throw one in the mix and all would be forgiven. So hey Mister Promotor – save your $250k on Paul Simon and book Gary Stewart’s Graceland instead – nobody would know the difference. With enough individuality and style to carry it off with aplomb, this collection of damned fine musicians were frankly superb. Yet another inspired booking by the organisers that had the whole field singing in unison. 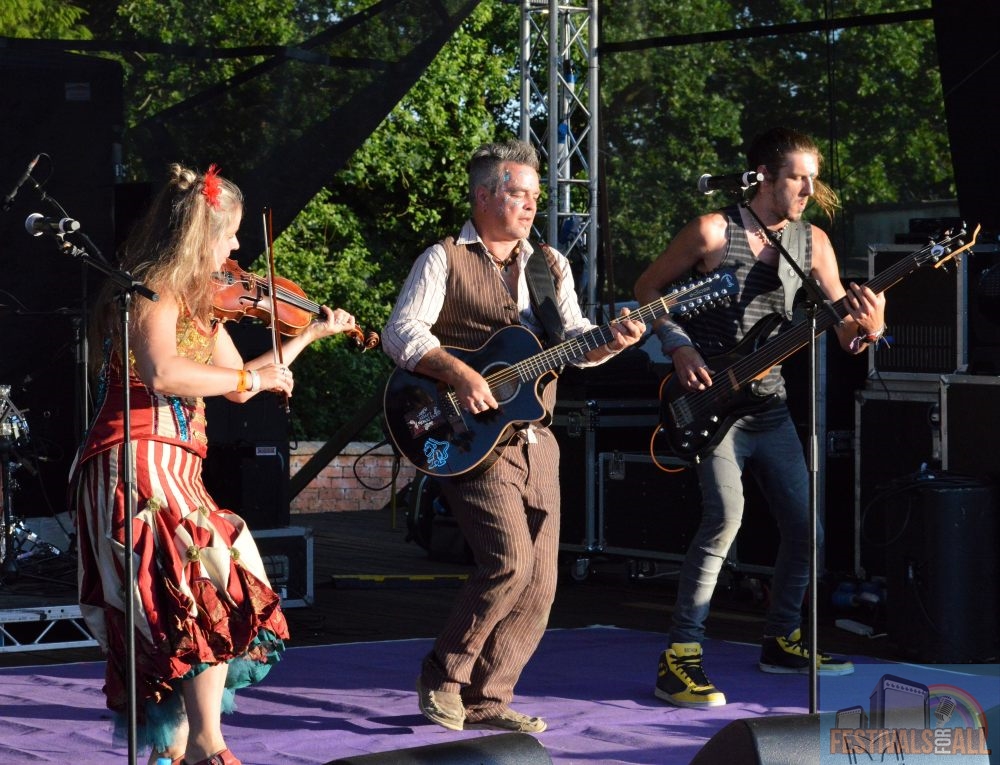 Certainly no surprise that the hard working 3 Daft Monkeys were as excellent as ever. One of those rarefied festival bands that whatever the circumstances, you just know in your bones that they will deliver. Class Act. Dan Webster closed the acoustic stage in fine style before Nick Heywood regaled the main stage. It’s great when a festival team have the confidence to throw in the occasional curve-ball act; out of kilter to the mainstream genre. More polished pop that pure folk, FFA feared Heywood and his excellent band were in danger of losing part of the audience mid set. Then it happened. The band twisted on its axis, hit the funk button and launched into an extended ‘Boy Meets Girl’. Bloody brilliant. Back-to-back with the wonderfully anthemic ‘Fantastic Day’ and the set ended, rather like Beardy itself, as rather a triumph. 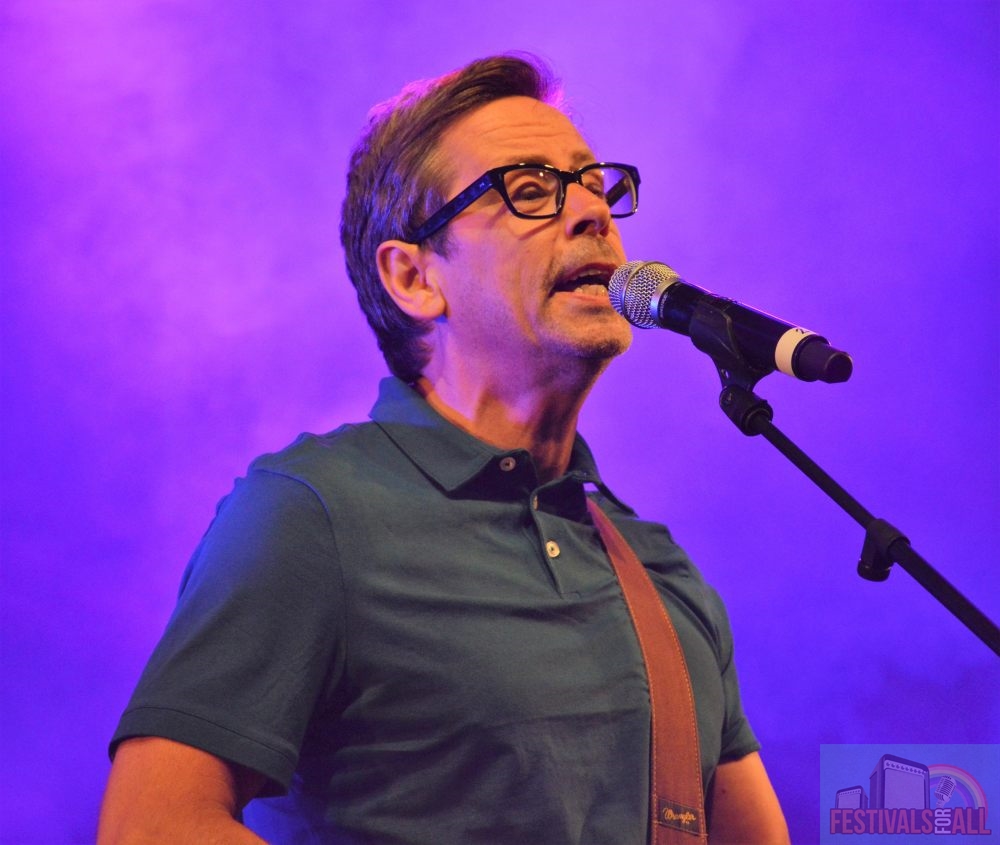 Sooo… there you go. Beardy Festival was excellent by any standards. A remarkable achievement in its inaugural year. For those blessed to attend in 2018, there is the ongoing pleasure of being able to say to the great grandkids in years to come ‘I was there when it all started’. This Reviewer will. 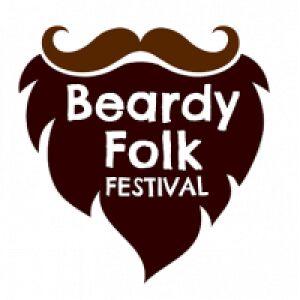 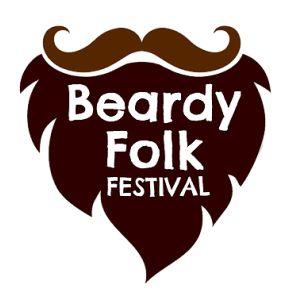