Well, another Acoustic Festival of Britain under the collective Festivals For All belts.  We do like this festival; small and friendly but with a quality of facilities, plus scope and depth of artists, that put many larger events to shame.  This year was no exception, despite the high winds!  Remember that apart from quality, the common thread is the acoustic element. The thrill of watching some of the most respected artists around performing their material in an acoustic format can be truly awe-inspiring. Once again Acoustic Fest provided a superb event.

Friday was a great day, checked out the excellent facilities provided at the festivals home of Uttoxeter Racecourse to find the site buzzing to an eclectic mix of food and craft stalls, numerous stages, and a huge bar stage marquee (plus another large bar tent if mobility proved an issue for whatever reason!).

Cerys Matthews performed an excellent set, with key elements performed in the welsh language. There can't be many artists confident and talented enough to get a main stage festival crowd singing chorus lines in Welsh. Spellbinding fragile songs in any language.  Stunning.

Main stage headliners Hayseed Dixie closed the day with another polished performance that had the crowd rocking. Enhanced with entertaining banter, they had the place kicking. FFA were lucky enough to be side stage for this set (oh yes!!!!) and the effortless musicianship of these guys is outstanding close up. A true festival favourite, and no wonder.

On the smaller stages we were blown away by a great band called Tilted Smile; absolutely splendid and one we tip for the future. They are on the road currently so catch them now before they become massive.

The night was rounded off by a typically entertaining and bizarre set from The Big Fibbers.  These guys performed around three sets per day over the weekend – and no wonder. FFA will forgive them for not laughing at our response to their song banter 'What does a cowboy fly keep in its saddle bag?' .... 'Three pairs of clean socks' being our reply!  Yep they are that kind of band. It was that kind of night.

Again a feast of great music on Saturday, and again the old festival dilemma of who to see / who to sacrifice… Sadly we missed Ghost Trains, but word on the streets tell us they performed a typically excellent set. We were gutted to discover that due to a family illness, Aziz was unable to appear.  If you have never seen this guy you have missed a treat – brilliant musicianship. Hope all is well mate.

Every festival has a least one ‘festival moment’. If you are very lucky and in the right place at the right time, there may be many; those times where the hairs on the back of your neck stand on end.  Such was the performance by Fish.  A true giant of a man both musically and physically, Fish decided to leap the barrier & wander amongst a stunned main stage crowd, radio mike in hand. He sung one of the many songs from his extensive repertoire about the complexity of The Human Condition. Standing head & shoulders above most of the crowd it was a magical moment. You could hear a pin drop. Great stuff.

The Quireboys were equally stunning, performing as an acoustic six piece – a scoop for Acoustic Fest. Their set typified what makes this festival special – hearing their brand of rock & roll played as it was originally written , acoustically, really brought out the depth, complexity, and talent of this splendid outfit.

A moving set from John Parr was immediately followed by Steve Harley to close the main stage. Accompanied by a stripped down Cockney Rebel (violin and keyboards) their set was electric with some of the best musical virtuosity seen all weekend.

Sunday was the day of The Gales. They practiced on the FFA tent throughout Saturday night leaving us bruised and battered, and rolled on to pick a fight with the huge main bar marquee mid morning. Gale one – Marquee nil.  Half the arena was closed whilst the fire brigade dropped the beast on health and safety grounds.  The Acoustic Fest crew are an unflappable lot and the acts and timing schedules were quickly rearranged and communicated. Sadly some of the artists scheduled for the larger tents found themselves playing in tents a tenth of the capacity. But Bulldog Spirit and all that.

The Strawbs; what old stagers, they sailed through their excellent set with a laconic air and easy humour that was a privilege to witness. Likewise The Spinners – appearing especially at the Acoustic Fest for a lifetime achievement award. The classic hits just flowed.

Fairport Convention – polished, faultless, consummate professionals – a wonderful set which united the crowd / backstage / the band. ‘When my time is up I’m gonna see all my friends’. Indeed.

Caught Nik Kershaw perform a masterly selection of memorable songs, and the main stage bill was completed by Quill who performed an ideal set for closing a festival – excellently rendered covers and original material which sent the crowd away dancing and happy.

The night was rounded off on a side stage by The Re-entrants who, as in 2010, provided a hugely entertaining rendition of classic sing-along songs on Ukulele’s.  These guys are first rate musicians and very very funny. Any event organizer wishing for an act to close a stage (particularly a bar stage!) could do a lot worse than book these guys. Good Times.

Stopped to buy a new tent on the way home. Worth every penny. 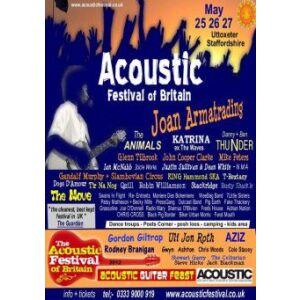 The Acoustic Festival of Britain 2012 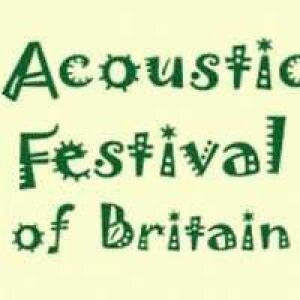 The Acoustic Festival of Britain 2011

The Acoustic Festival of Britain 2012

The Acoustic Festival of Britain 2011